As far as work, this was a much better week. But in my personal life, I was just in a funk. I think it was because I got my period on Thursday. Maybe being in a funk a couple days before my period is normal for me. It sucks being a girl. I'm pretty much guaranteed to have an entire month out of the year where I feel like a freaking pooping walrus with an achy back.

That's not to say I wasn't excited for the weekend! Especially after my awesome run that morning. I felt so alive! 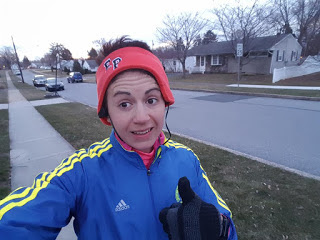 I hit a snow squall on the way to work. It was so weird. I thought I was driving into the apocalypse. Then suddenly, I crested a hill, and boom it was sunny out!

At work, I got to cut a lot of lamination. I love cutting lamination! I'm serious. I find it very relaxing. 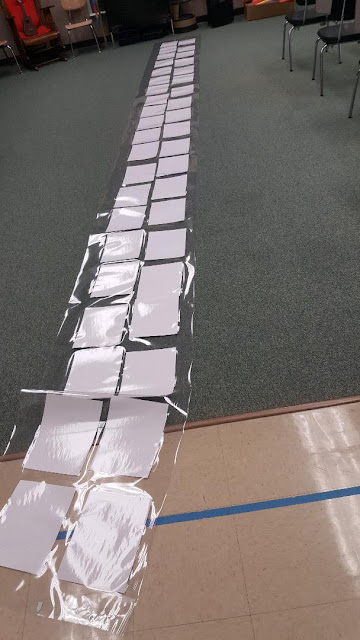 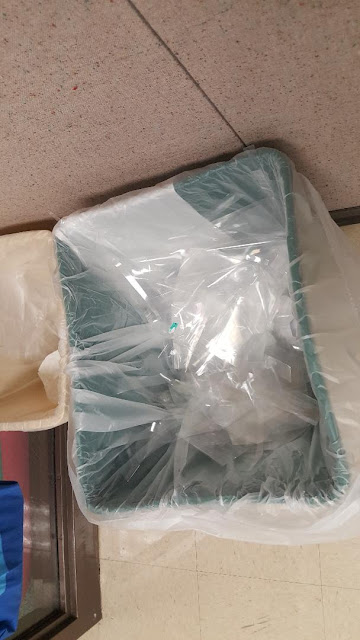 
Look at the beautiful picture Paul sent me while I was at work... 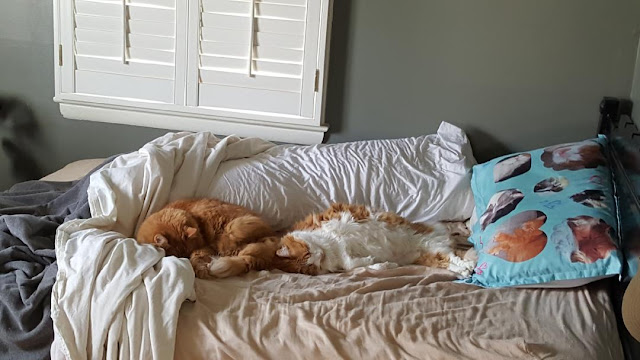 Oh, on the way home from work I treated myself (thanks to a 50% off coupon!) to a new puzzle! 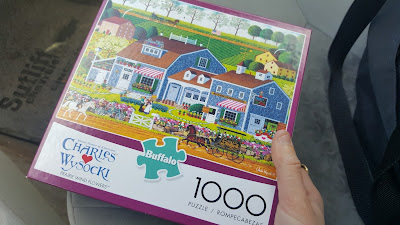 Paul and I had a wine and cards date scheduled for that evening. WE PARTY HARD! 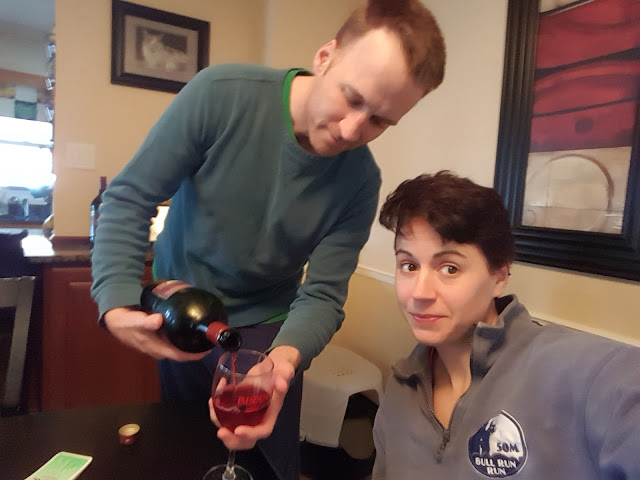 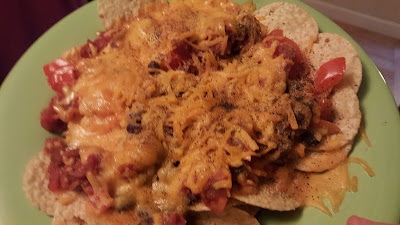 I was in such a good mood when I woke up on Saturday morning. With twelve hours of sleep, I felt refreshed. I spent the first four hours of my day drinking coffee, listening to podcasts, and finishing my puzzle! Then I went for an 8 miler around my hood. I felt great!

That afternoon, Paul and I drove down to Gettysburg for some wine tastings. First we parked at Buddy Boy and did the 5 for free tastings. We have tried most of Buddy Boy's wines already, so 5 tastings was enough for us. We left with six bottles to take home! (5% off!)

Then we parked in the garage near the square. It's only 75 an hour, which isn't too bad. We meandered into a store I always passed on my way to Godspell rehearsal. It was called Gallery 30. I loved it! But everything was a bit expensive... 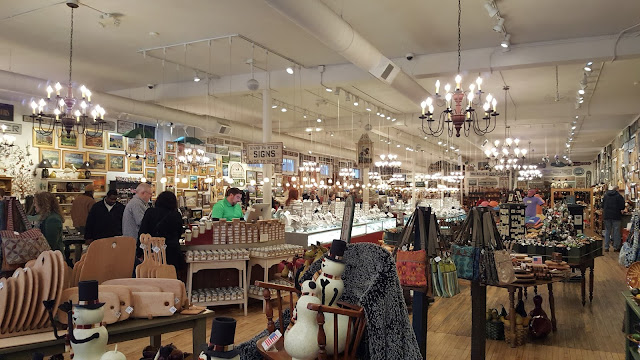 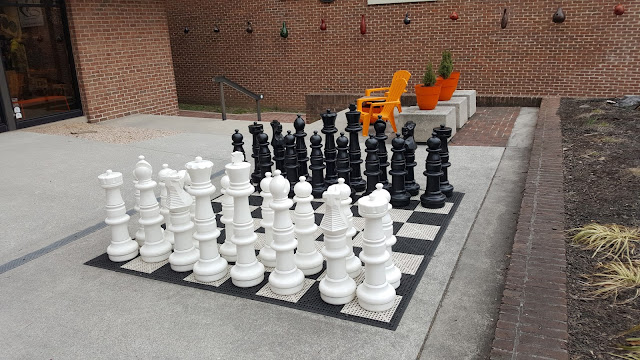 Cool chess board outside a game store.

Then we walked to Adams County Winery. There are three wines of their's we absolutely love: Rusty Red, Rebel Red and 3 Ships to the Wind. We did the 3 for free wine tasting and then bought four bottles. If you ever want to try Rebel Red, it is in the liquor stores in Central PA. look in the Made in Pennsylvania section. 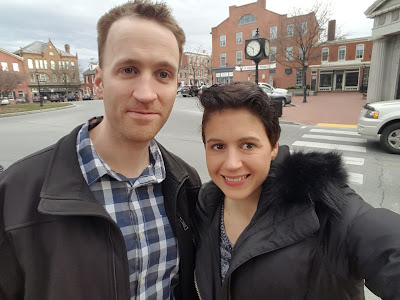 The last winery we planned to go to was Hauser's which is right on the square. They have quite the selection of cider too. The tastings were 5 for $5 so we did have to pay at this place. I liked one of the ciders I tried but I did not like any of the wines. Paul really liked the merlot, so he bought a bottle of that and a 6 pack of cider to go.

Then we were going to eat, but on our walk to the pizza place, we passed Knob Hill Winery. I bought a glass of one of their reds and Paul had beer from Gettysburg Brewery. We drank slowly and played cards!

(FYI if you're not familiar with wine tasting, you usually get about 1 oz. So even though we tasted at 3 places, we probably only had the equivalent of one glass of wine.) 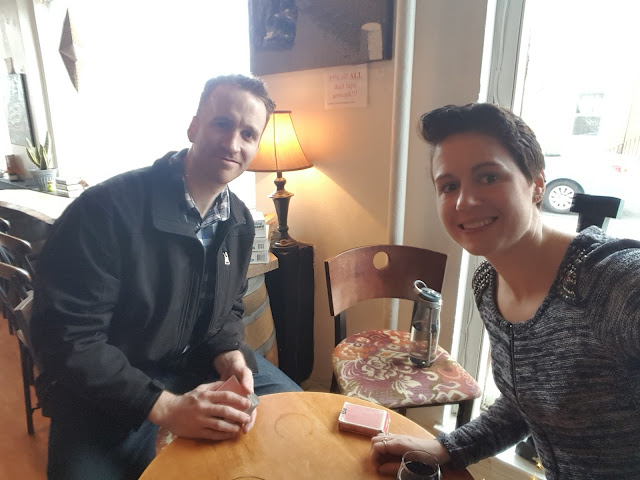 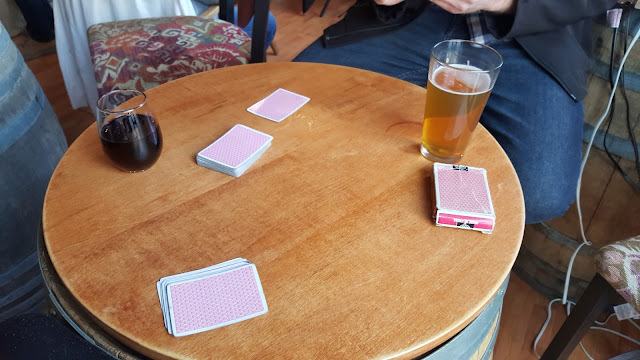 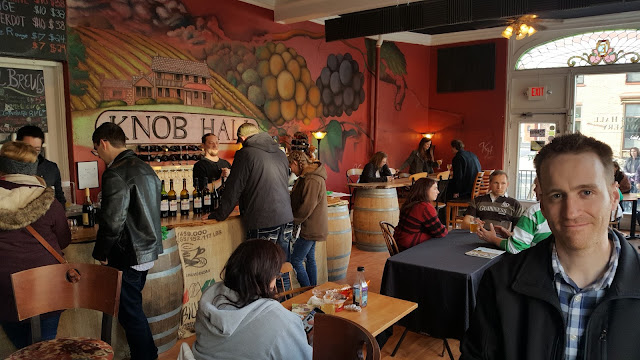 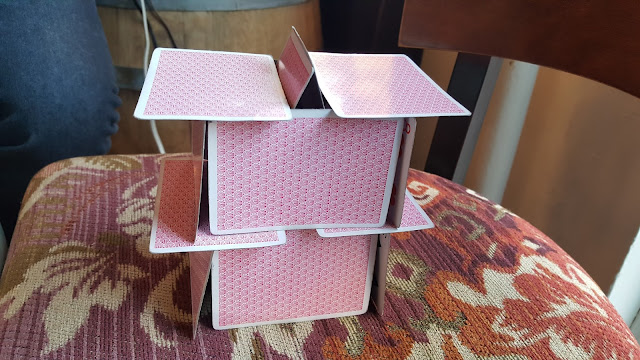 Paul never made a card house! Please tell me you used to make card houses when you were a kid!

At the pizza place, we shared a buffalo chicken sub, fried mushrooms, and hydrated with Diet Cokes! 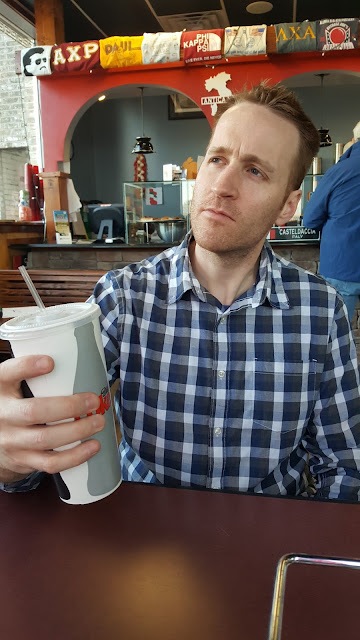 "This particular Diet Coke has a slight oak after taste." 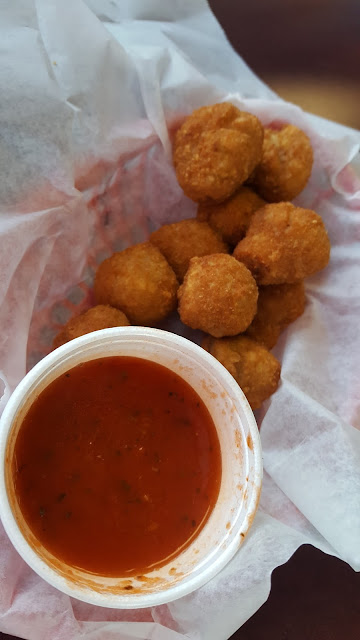 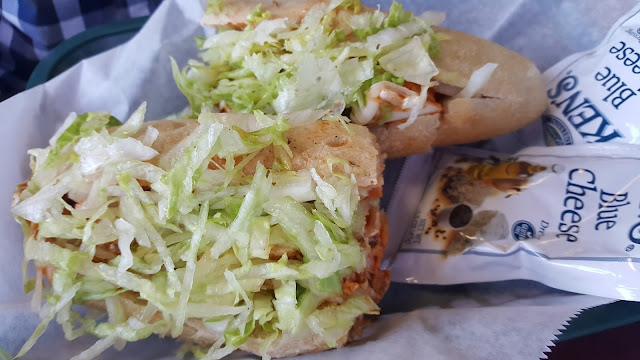 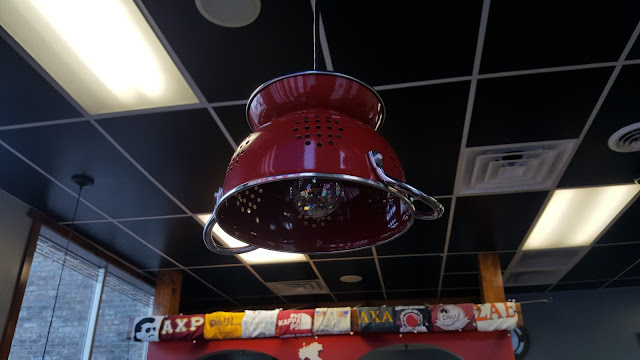 Look at the cool light fixtures! 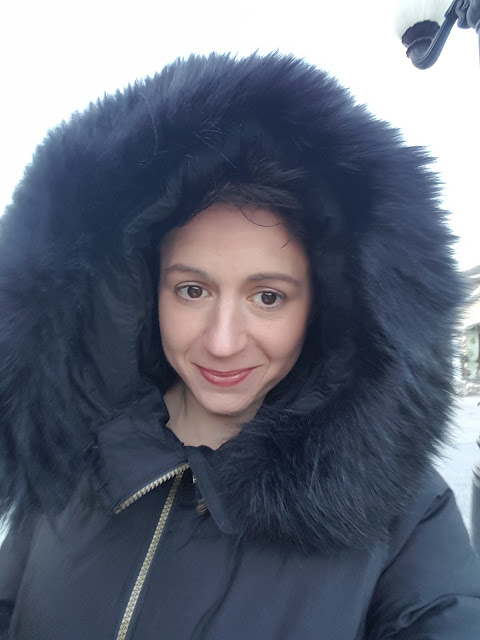 I was a little overdressed but I HATE being cold! 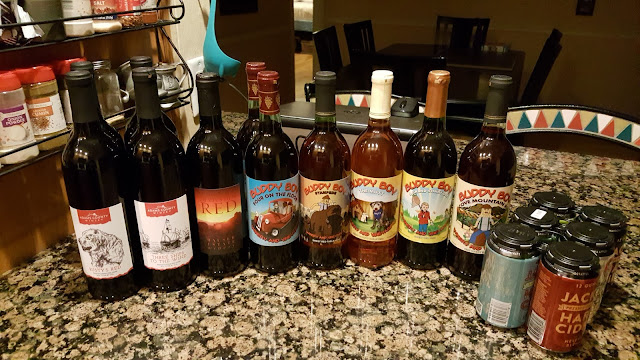 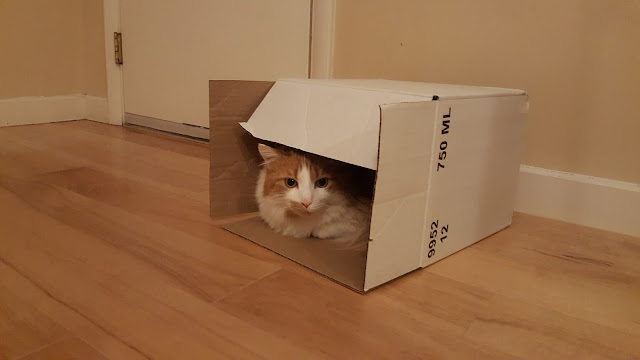 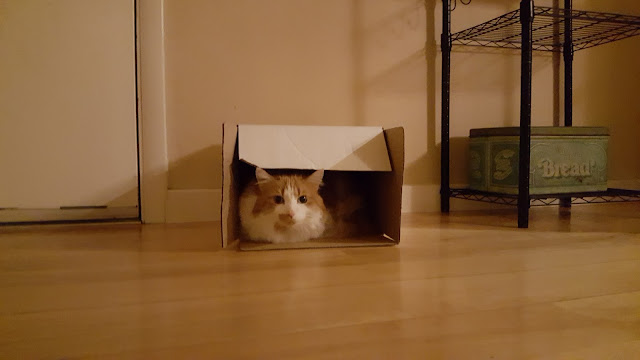 I had the absolute worst night of sleep. That's what I get for sleeping 12 hours the night before. I was still awake around 3am. FREAKING A. I'm pretty sure reddit had something to do with my sleepless night... 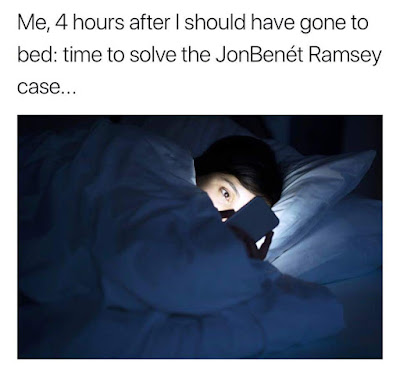 I was supposed to run trail with Kristen but I texted her in the middle of the night to bail. Then of course in the morning, I woke up naturally at 7:30am and was unable to fall back asleep. What a freaking waste.

I worked on some puzzles while we watched. 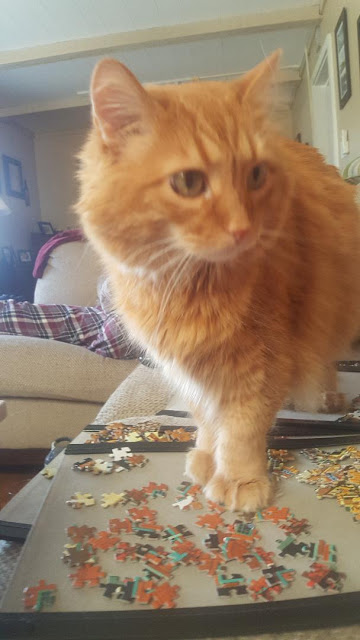 I didn't feel like working out, but I decided to suck it up and lift. I am still playing it safe because of my shoulder. I tried pull ups and they felt great! I was worried about pull ups because they are so intense but they don't bother my shoulder at all.

Later on that night... more Big Brother Canada and puzzles. It truly was a "do nothing" type of day around here. Even the cats got in on the action... 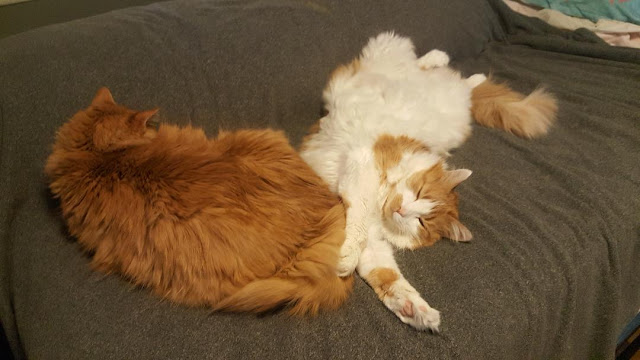 Do you want Oprah to run for president?
What are your favorite local wineries?
Tell me something fun you did this weekend!
Posted by Meg Go Run at 4:54 AM