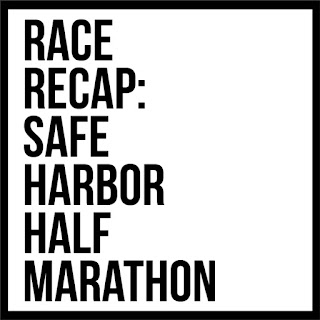 On Saturday, I ran the Safe Harbor Half Marathon in Safe Harbor, PA. It looked like the perfect race for me for several reasons:

I have run lots of cheaply priced trail races as well as some fat asses that are free, so the $20 price didn't alarm me. I assumed the course would be well marked and it would be a well organized race.

I pulled into the parking lot at 9:30. I was surprised to only see about 5 cars. I walked over to the lone man at a tiny little folding table. The man, who was the race director, gave me my bib and a map of the course. It looked confusing to say the least... 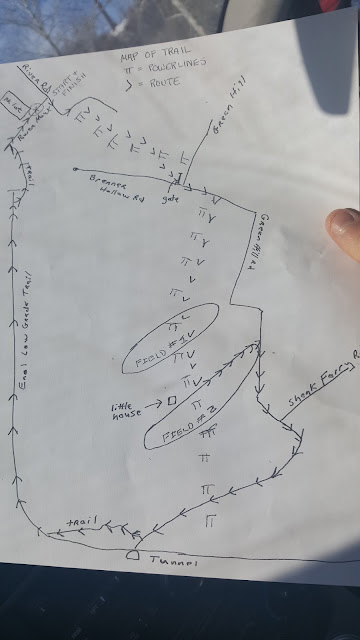 This is basically how our conversation went:

LOL YES, I SAID THAT.

I figured that as long as I wasn't in the lead, I should be fine. Only a few more cars pulled arrived, and at 10:00 all of the runners (18 total, some running a full marathon, some running a half marathon) began our journey.

The course was a 4.2 mile loop with some extra road tacked on at the end of the last loop to get the distance we needed. As a half marathon runner, I'd be doing three loops.

First, we went up a power line. The first section was so steep we had to climb. I was glad to have trail shoes. For .6 miles, it was straight up a power line in the snow. There was nothing to do but hike it, one foot in front of the other. The sun was beating down and even though there was snow on the ground, it was hot. 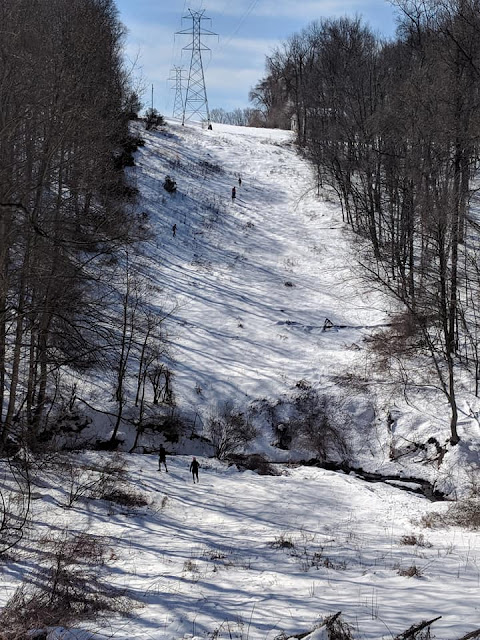 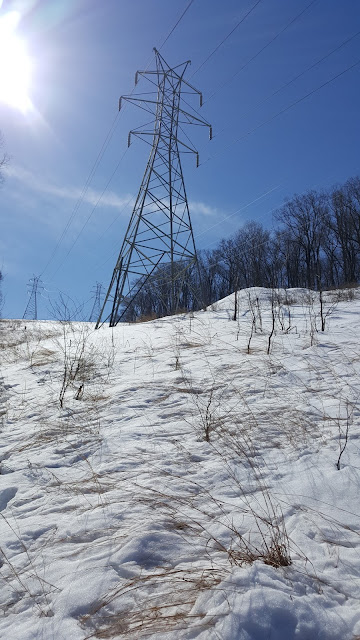 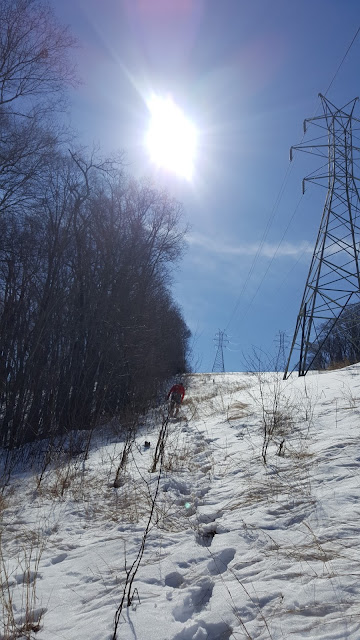 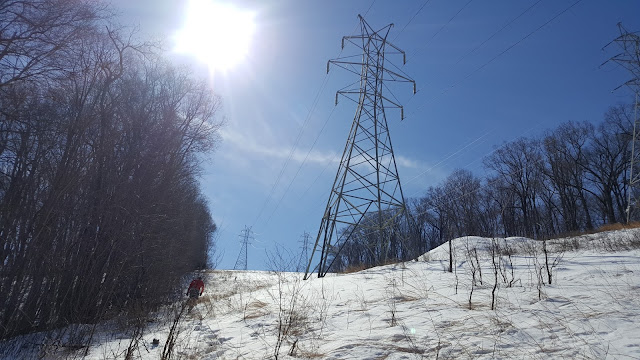 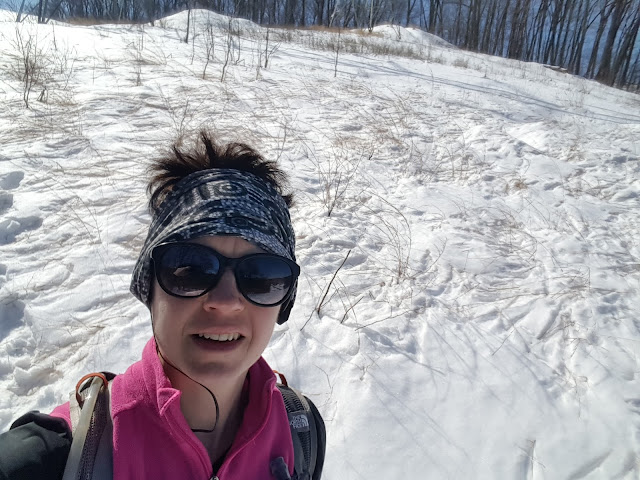 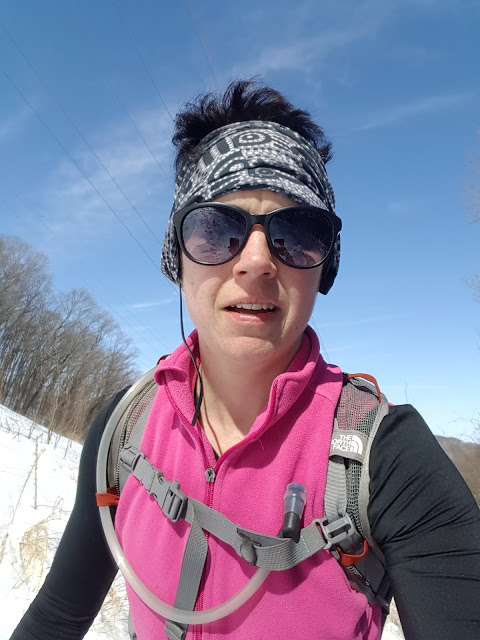 When we were finally at the top, we ran over rolling hills. There were tire tracks in the deep snow, so I tried to run in those. It would have been even more difficult to run had those tracks not been there.

We crossed a road and went into another field... down steep, slippy, snowy hills and up another power line. It was beautiful but it was tough. There was a lot of walking. I had been hoping to make it home in time to go to the March for Our Lives in Harrisburg, but I could tell by the course terrain that I would be out there for well over two hours and probably wouldn't make it home in time...

It was when I was in this field that I heard gun shots. Lots of them. I figured there must be a gun range nearby. There are gun ranges along the AT and it is always a little unnerving to hear them. (I looked it up later and saw there was a gun range 3 miles away as the crow flies. Some friends told me it is possible to hear a gun range from that far away.) 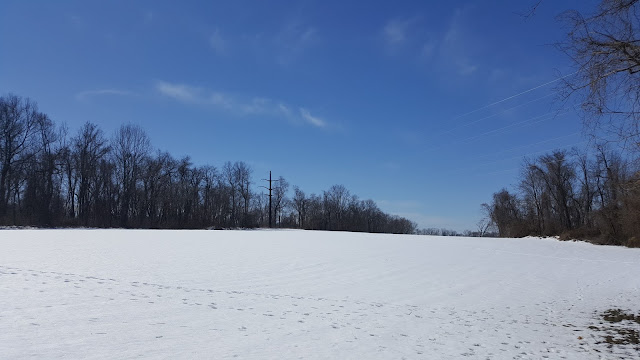 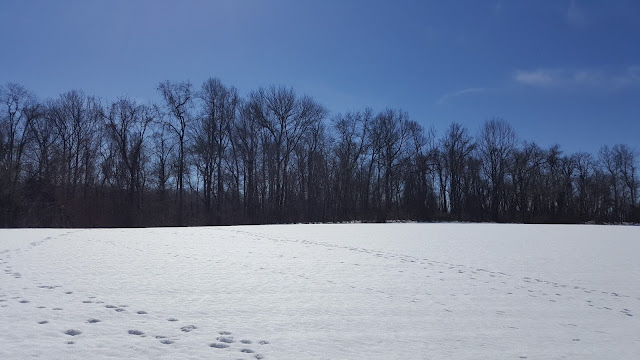 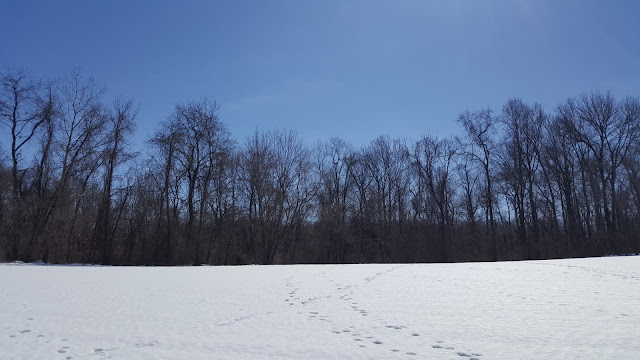 This field was pretty but I had no clue where I was going. I kept my eye on the group of three runners in front of me. At one point they turned left and I followed. We ran until we got to a road. It's always jarring to go from trail to road. We were stuck on that road for at least a half mile. Then it was down a dirt road and onto the first single track trail of the course. 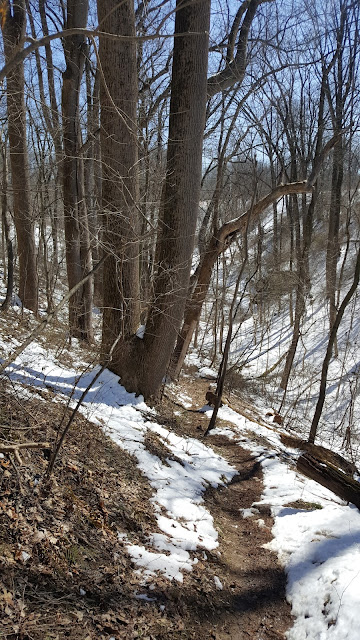 We were only on the single track for about a quarter of a mile. It brought us up to the Enola Low Grade Trail, which is a rail trail that runs high above and along the Susquehanna River. 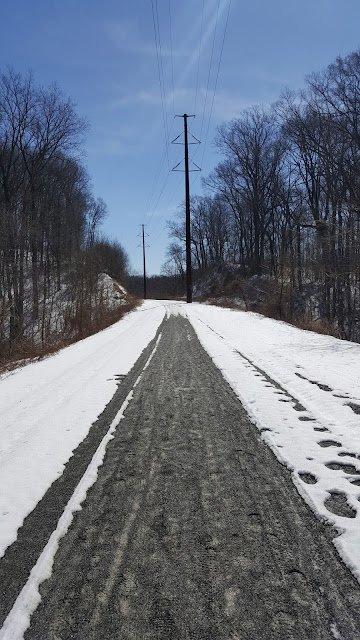 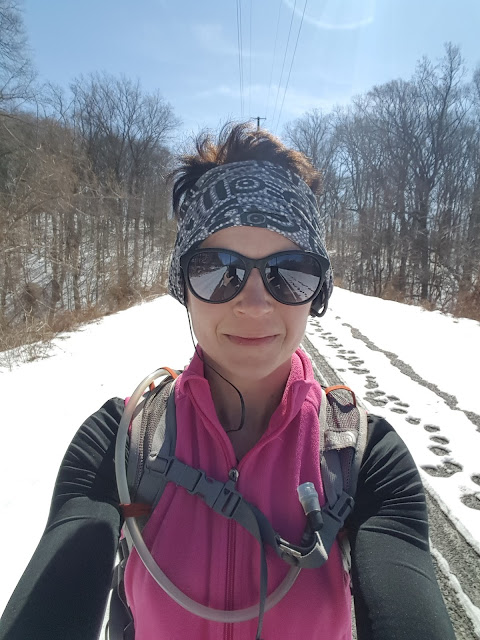 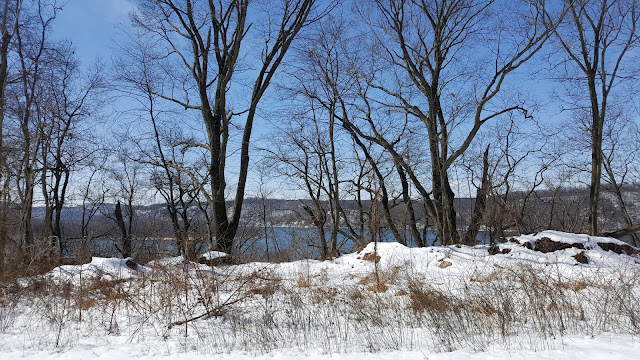 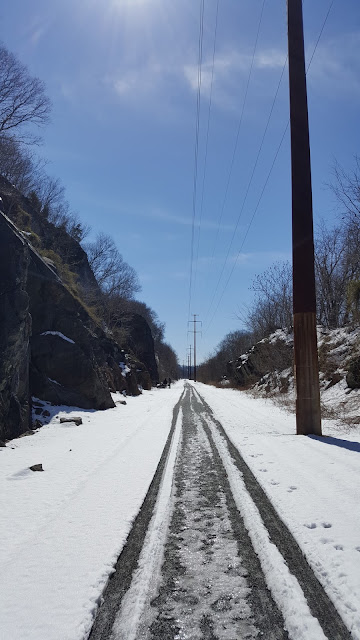 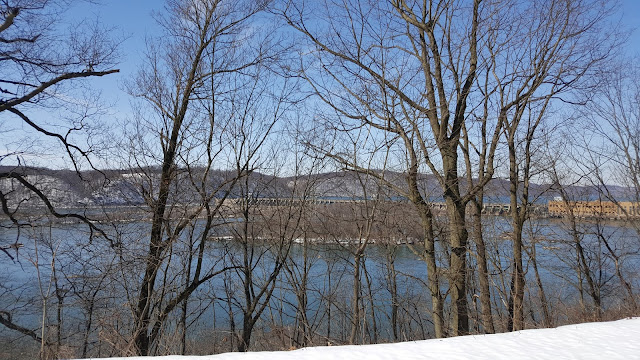 We were on this trail for about a mile and a half. Then it was down a steep embankment next to an old railroad bridge. 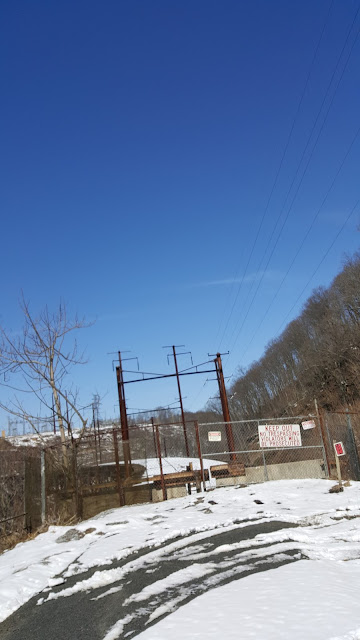 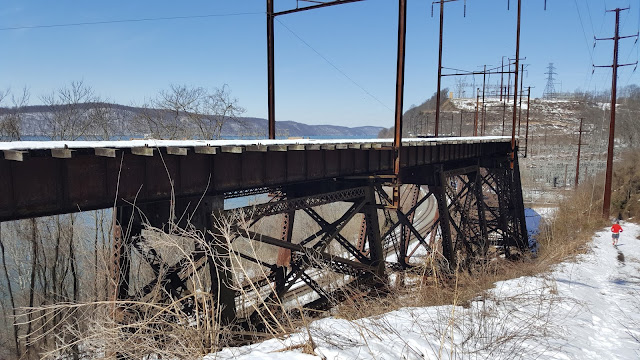 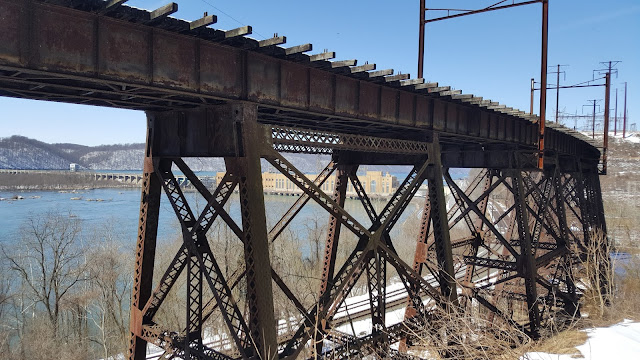 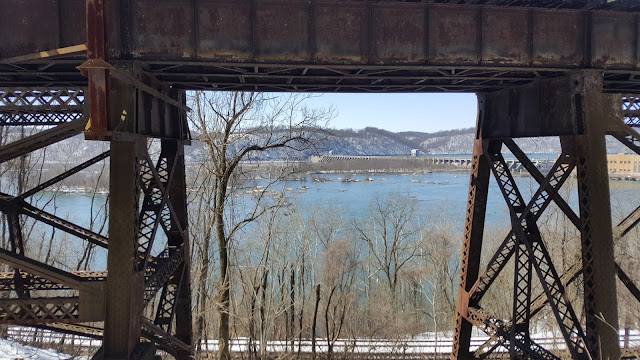 It was so steep, someone had installed a rope to get down! 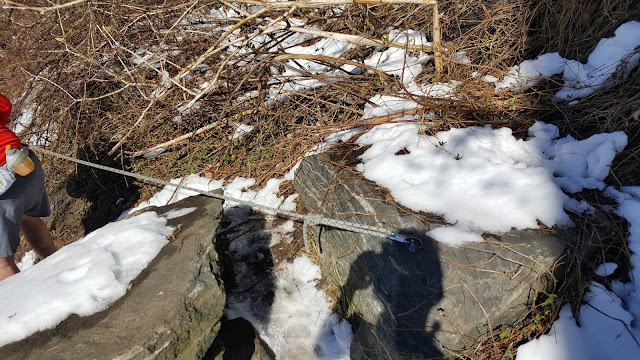 Then we were off the trail, on the road, and it was a short run back to the race director and his tiny little folding table.

Well, that was the WEIRDEST course I ever encountered. It was barely marked and it was mostly fields and power lines! I would have NEVER been able to find my way if I wasn't following people. I hoped to follow people on my second and third loops.

Before I went out on the second loop, the RD warned us that there was a grumpy landowner who did not want us running through his field. So instead of running through the second field, we were supposed to cut over to the road. I had no idea where the RD was talking about but a dude in front of me did, so I just followed him.

When we got to the field I thought we were supposed to skip, the guy I was following insisted we were supposed to run it following the power line and then cut to the road. That way we wouldn't have to run near the "little house" as depicted on my map above. I trusted the runner dude in front of me and just followed him.

When we got out to the road, a big white pick up truck with a sticker that said "gas guzzler" came barreling down the road behind us. The road was narrow and windy and the truck did not try to give us room at all. It was quite dangerous the way he was driving!

Toward the end of our second loop, I passed him and ran the third loop myself. I didn't like having to run by myself, but it seemed like there was no one else on the course!

There was something strange about my third loop.... I turned to go into the second field and there was a Posted No Trespassing sign that wasn't there before. I knew it wasn't there on my first two loops. Hmmm... I wasn't sure what to do. My phone didn't have reception so I couldn't look at a map. I continued down the road and ran parallel to the field. Luckily, I was going the right direction and was able to get back on course just fine.

I finally caught up with some other runners (well, I lapped them) at the section near the end with the rope. The gal and the dude asked me if I got shot at. What!?

I told them I heard lots of gunshots but I assumed it was a gun range. They told me that some crazy dude lived in the "little house" and came out in the field and shot at them. They SAW his gun and he SHOT. AT. THEM. They ran to a neighbor's house to call the police. The neighbors told them he's a crazy guy and he thinks he owns all the land there but he doesn't.

WHAT THE FREAK!? I couldn't believe it. Were the gunshots I heard from a range or from the guy in the little house? Did he come out and put up a No Trespassing sign? WAS HE THE ONE IN THE BIG WHITE TRUCK WITH THE STICKER "GAS GUZZLER" ON IT THAT CAME BARRELING DOWN THE ROAD AT US!?

This was the strangest race of all... And to think I am signing up for these trail races so I could have safety in numbers on the trail. To think I was hoping to get home in time for the March for Our Lives and then runners get SHOT AT in the middle of a field?

What a strange, strange race... 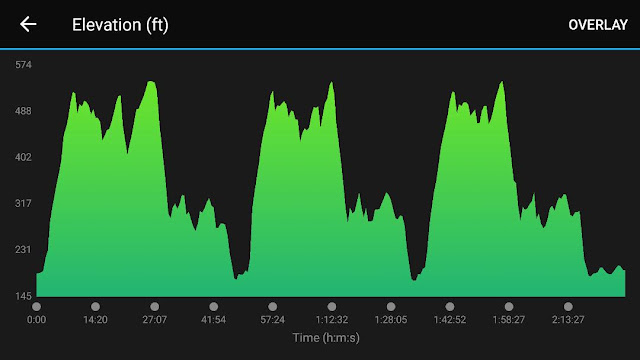 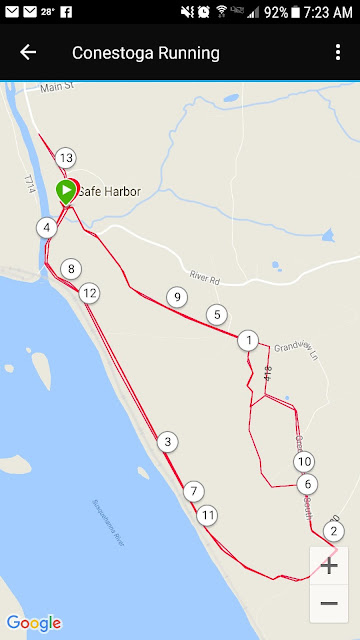 On Sunday, a woman who ran the race shared her experience on a local running Facebook group. It was shocking, so I messaged her for more details. She laid it all out for me and gave me permission to copy and paste her experience on my blog. Note: On the first loop, she was in the pack of runners behind me. I was in the first group of runners that must have gotten by the crazy dude first...

"I was running up the second climb and I saw the male and female runner that were in front of me running back down the hill toward me. I thought they were lost at first and maybe we had gone the wrong way somehow. Then they were yelling that we should turn around. I heard a man screaming at the top of the hill and he came walking to where I could see him. Even after we turned around to try to look for another way around he continued screaming and swearing at us, saying that he had a gun inside. When the two runners in front of me got near his house, he came out yelling and they tried to explain that we were just running and weren't there to do anything wrong. He grabbed the male and then the female that was with him tried to stop it. He shoved her.

We ran back down the hill to find another way around and he kept screaming and swearing. He told us that all of that was posted private property and he would go in and get his gun. Once we were out of his sight I think he must have gone back inside. We then ran on the road, but we were worried he could be in a vehicle trying to come after us. We didn't end up seeing him again but we were worried that he would be there when the runners came back around again that had made it by his house the first time. I think it must have taken him a couple people to realize that we were running there. So I know the first couple of Runners got by the first time. After we finished our first loop and got down to the parking lot again, we told the race director about our experience. He said we could route around that angry guy's house, but we decided we were done. It just wasn't worth it. I ended up going to the York Rail Trail to get the rest of my miles in... Safely!"

Guys, I don't even know what to say. I hope everyone made it back safely! All I can discern from the couple accounts I heard was that on the first loop, I was in the group of runners that made it past the house. On the second loop, he was out in his truck putting up the "No Trespassing" sign and then came barreling down the road past us. And on the third loop, I luckily saw the sign and went a different way. What if he hadn't put out that sign? I would have run through that field of power lines again and probably have come face to face with his gun!

I should have gone to the March for Our Lives. I think the universe was trying to tell me something.