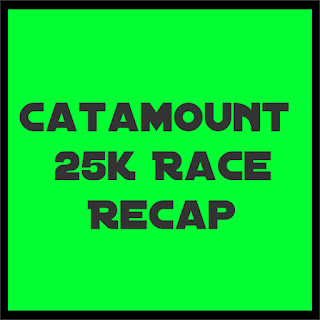 On Saturday, I ran the Catamount 25k Trail Race in Stowe, Vermont. Look for recaps of the rest of our vacation in the next couple days!

Here is a recap of my race!

My goal was to go slow, take my time, hike when needed, have fun, and take lots of pictures.

The elevation profile made me nervous, but in reality, this was not a tough race at all. Yes, there were hills, and I walked up most of them, but the route was not technical and there were plenty of downhills in which I could make up time. I finished in 2:46 and averaged 10:58 per mile. Not bad for walking up all the hills!

One reason I walked up the hills was because I didn't train for the race. The second reason was because we climbed a mountain (Camel's Hump) the day before and I was tired before I even started! Luckily, I got more energy as the race went on. Isn't it funny how that sometimes works?

The race started at 8:30 so I didn't have to get up at the butt crack of dawn. However, I had a massive case of diarrhea that morning. There were many URGENT trips to the bathroom. I have no idea what caused the phenomenon because it was much different from my normal pre race jitters. This was not mental. This was physical. Thank goodness I was able to get to bathrooms before the race and not have to wait in lines.

The Catamount started at the Trapp Family Lodge in Stowe, Vermont. Pre-race was bustling but I just focused on getting myself ready to go. I'm not very festive before a race starts. I just want to make sure I have everything I need and that I can go to the bathroom ten times. 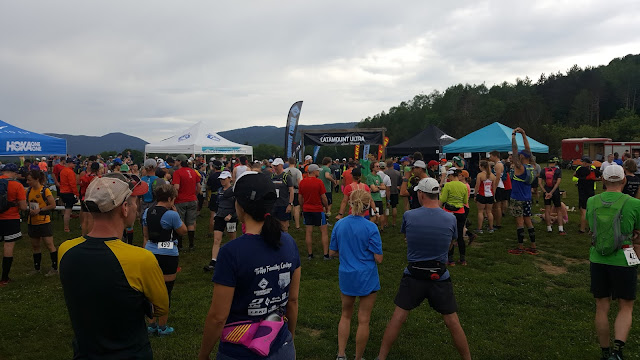 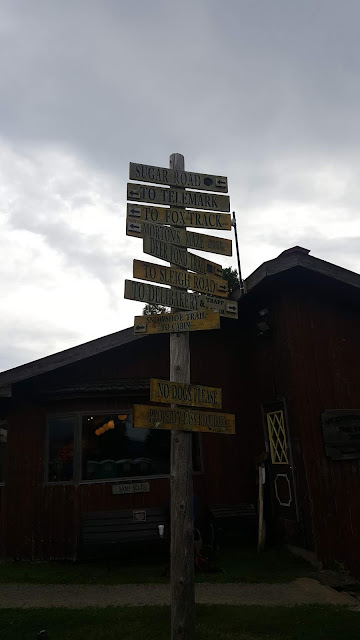 There are so many trails at the lodge. 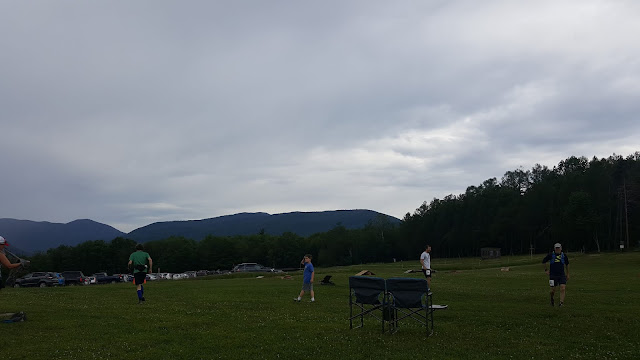 It was a cool, dreary morning. I was expecting scorching sunshine. It rained for about half the race. 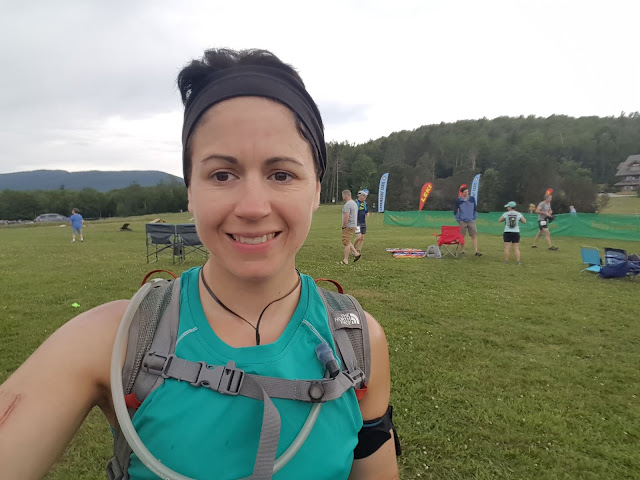 Most of the course was through fields or dirt/fire roads. There was very little single track. The forests were beautiful and green, but I was expecting more mountain views. Here I am around mile five. I asked a girl when the big climb was coming. She said it was almost over. Oh wow, I was expecting more of a climb! 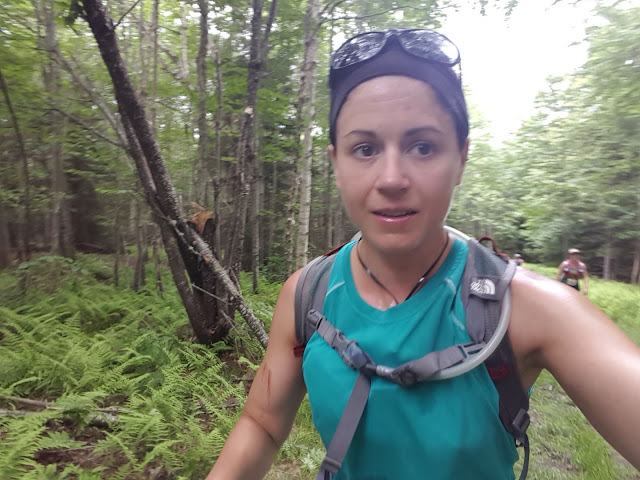 As you can see from my pictures, the course was very beautiful, but I have run in plenty of spots in PA that are just as beautiful. I wouldn't recommend driving to Vermont just to run this race, but if you want to spend some time in Vermont anyway, this would be a good race to do while you're there. 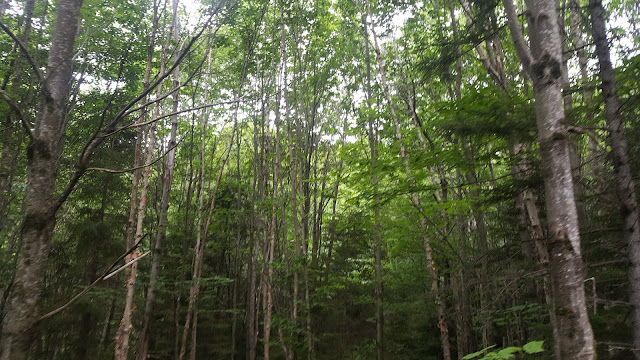 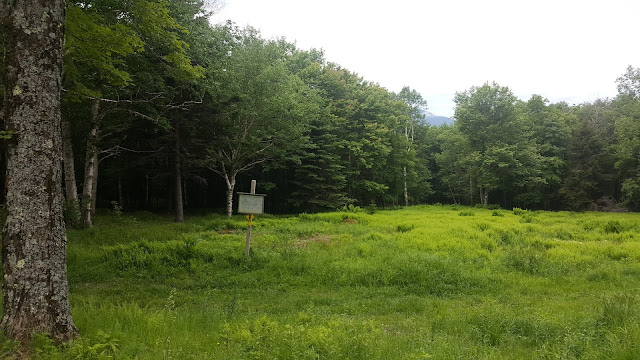 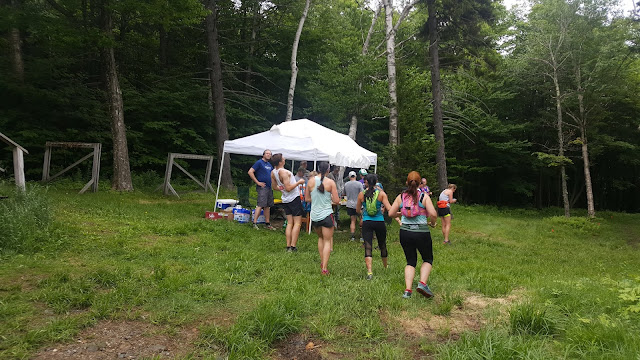 Aid Station #1. Lots of goodies but all I did was chug a Gatorade. (Before the race I had a pbj bagel. That was more than enough to sustain me.) 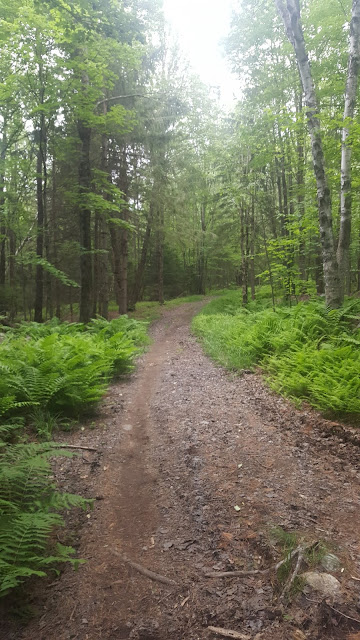 This is a good depiction of what a lot of the race course was like. Not the type of "trail" I was expecting. I thought it would be single track and more technical. 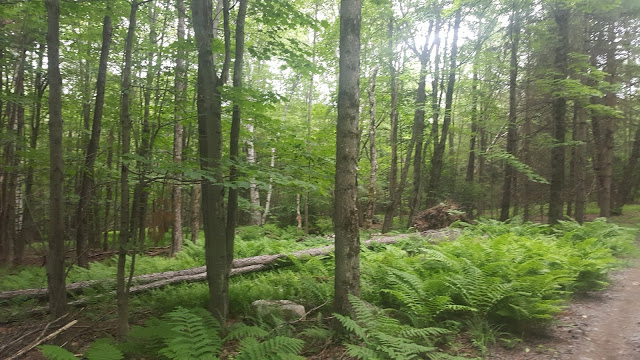 There were lots of ferns! 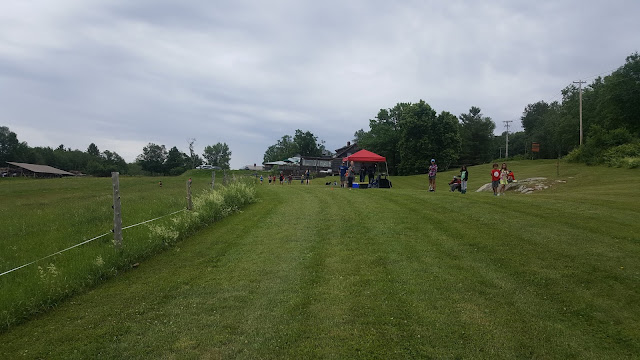 Aid Station #2. The volunteers and spectators were very friendly, as they usually are at trail races!

Some of the course went through beautiful meadows and pastures. Normally, I hate running through stuff like this because I'm scared of snakes . But I'm not afraid of snakes in trail races because I figure they are long gone by the time I run through the meadow! 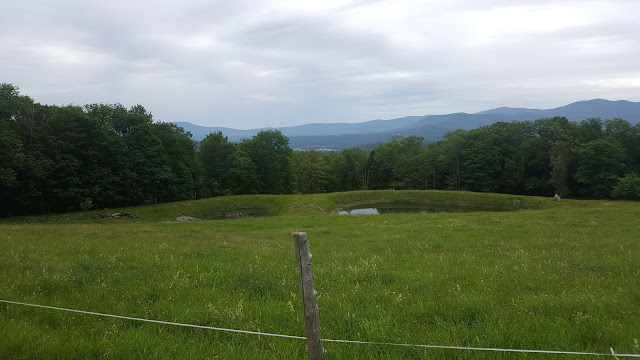 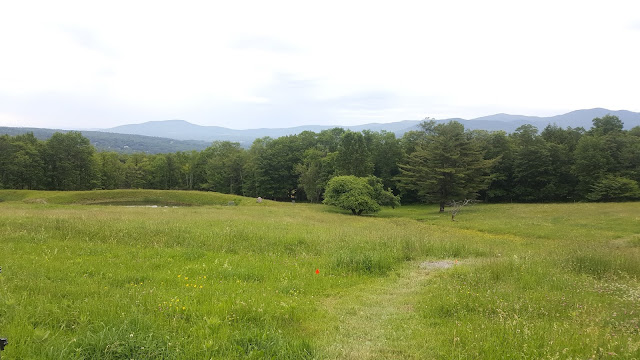 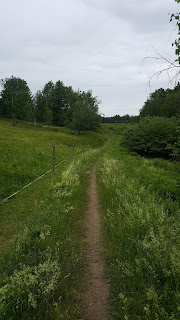 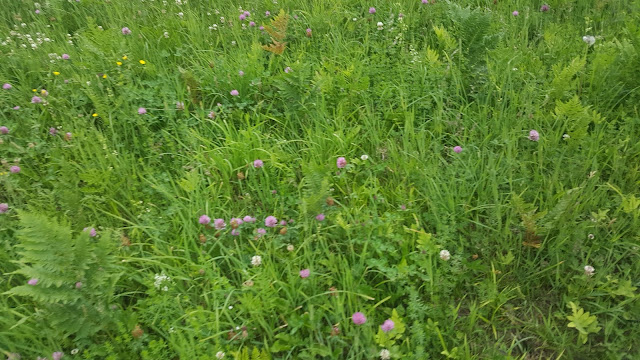 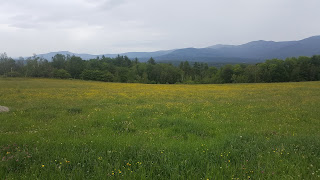 My right hip was a little sore before the race even started from hiking up a mountain the day before. Luckily, it only got a little worse during the race. However, by mile 12 my hips and back and legs were feeling sooooo creaky. I couldn't wait to have the change to stretch and foam roll!

Note: Around mile five I turned on my podcast: Morning Joe from the day before. When it was over, I switched to Fresh Air with Terry Gross. I turned off my podcasts when there was about a mile left.

When I knew the finish line was close, I kicked it into gear. Not a sprint or anything, I just wanted to take advantage of the energy I got from knowing the finish line was less than a mile away! Paul and our friends Bob and Rachel were supposed to come see me finish, but since I got done like a half hour before I thought I would, they missed me! 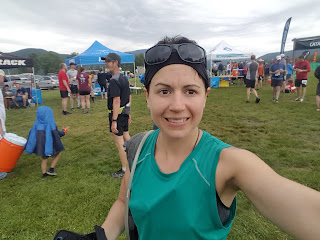 Post race selfie. I have tissues shoved in my sports bra, that's why my shirt looks weird! No medals, but we got a nice short sleeve v-neck! 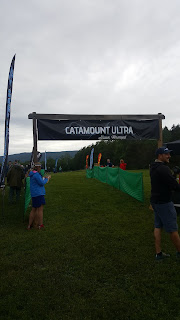 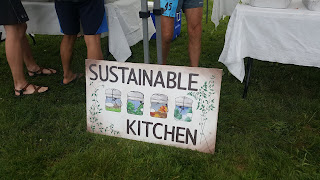 The post race food was delicious! It was tortillas with chicken, fresh beans and veggies along with other toppings. I made a heaping plate and took it back to my hotel to eat. 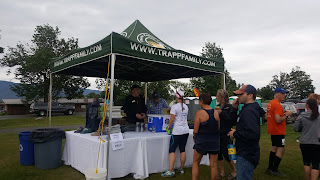 I'm not sure if the beer from the Trapp Family Brewery was free for the runners or not. I don't like beer, too bad!

All in all, this was a pretty race that wasn't very challenging. I wouldn't recommend driving to Vermont just to do it, but if you are up there anyway, this would be a pretty race to do. There is also a 50k distance, if you wanted to do the loop twice!

Have you ever run a race that you thought was going to be hard but then wasn't that bad?
Posted by Meg Go Run at 5:30 AM