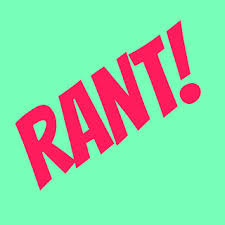 I did not tell you about a really annoying incident that happened while we were in San Diego. I like to keep my vacation posts light and fluffy, but this incident on the San Diego boardwalk made me feel gross.

The day we arrived, we went to Mission Beach and had pizza on the boardwalk strand. We didn't eat all of it, so they gave us a box. It looked like one of those big see through salad containers that you get at a salad bar- which was kind of strange- but it closed nicely around the pizza and we carried it into a couple shops.

The thing in San Diego, I guess, is that the clerks in the stores sort of follow you around. I couldn't take it! I just wanted to browse without someone up my butt. (Mom, you would have HATED it!)

Well, I went into a store to look for a t-shirt for my brother and the clerk in there was a young guy. (Paul was outside.) The guy could have been 21 or he could have been 26- I really could not tell. I turned down an aisle of clothing racks and he stopped at the end of the aisle and put both hands casually on opposite racks as if to "trap" me.

"Okay, I'll make you a deal," he says, all friendly. "I'll let you carry the pizza in the store if you buy a shirt." (I hadn't even told him I was there to buy a shirt.) I was EXTREMELY annoyed the way he had sort of blocked me in. He would never have done that to a GUY, nor would he have done that if Paul was in there with me. But because I was a GIRL, it was okay, and it was okay for him to "make deals with me."

I stared at him with a dead panned look on my face. "Is there a problem with me carrying my pizza in here?" I asked, exasperated.

I rolled my eyes, turned around, and walked straight out of the store. He called after me, "I was just joking, ma'am, I was just kidding." But I left and I felt VERY GROSS. I hate how guys think they can treat girls however they want.

Can you relate to this situation? Where men treat you differently just because you're a girl? It happens all too often, in my opinion. I mean, even at the gym, men I don't know give me unsolicited advice. I don't see them giving GUYS they don't know unsolicited advice.
Posted by Meg Go Run at 5:30 AM