I have been doing some thinking about the amount of running I have been doing and decided I need to suck it up and run more often. It is hard because I like to lift and usually I refuse to lift and run on the same day. But I have been focusing a lot on my upper body these past couple months, so I decided that this week I am going to chill out a little on the lifting and run MORE.

I reached my goal, but it wasn't pretty! I didn't feel good at all. I mean, after the first two minutes, the whole thing sucked. 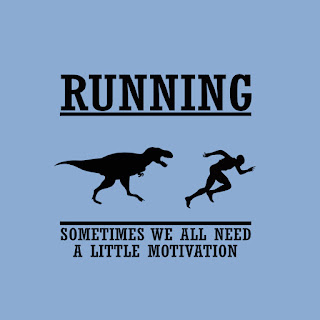 Yah, if something was chasing me on this run, I would have LOST. Big time.

Here's why it sucked:

1. It was REALLY FREAKING HOT OUT! The real feel temperature was 95 degrees and I picked a route that had no shade. This was my own fault. I could have picked a shadier route or *gasp* got up earlier. But I didn't.

2. It was Day #1 of my period, AKA the day everything aches. My back felt tight and all I wanted to do was streeeeeeeeeeeeetch.

3. My knee felt weak from the get go. This is strange because usually my knee feels strong while I run. I think it was still recovering from walking all around DC the day before. Walking really bothers my knee.


There were some good parts about my run...

1. Hydration! I took water with me so I could stay hydrated.

2. I changed up the route. Even though the route was sunny, it was different from my normal neighborhood run, so I had fresh scenery. 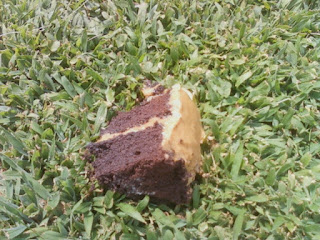 Have you ever seen such a perfect piece of chocolate cake just laying on the grass!?

4. I finished without giving up. The grand total was 7 miles @ 8:59 pace. I know that's a little over an hour of running but when you only have to run a couple more minutes to make it an even 7 miles, it's hard to stop!


That mileage at that pace was an effort. I should have gotten up earlier and run when it was cooler. So I'm not leaving myself off the hook! Tomorrow, I plan to run the same mileage but I am going to get it done before my first piano lesson of the day. Which means I'm going to have to be out on the road by 6:30! Do you think I can get up that early? We shall see!

What's the weirdest thing you saw on a run?
Do you ever run for time, not mileage?
Who else gets lower back period pain? All I want to do the whole first day is just bend over. All day.
Posted by Meg Go Run at 5:30 AM