Adventures on the Arc Trainer. 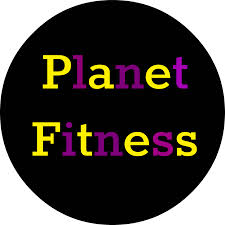 Paul and I go to Planet Fitness together now! We don't workout "together", but we drive in the same car to get there. It's more fun being there when I know he is there too. And one of the perks of having the summer off is that you don't have to get up at 5am to beat the crowds! Yesterday, we rolled in at the lazy-ass hour of 1:30 and it was pretty empty.

I decided I would try the Arc Trainer because I wanted to see if it bothered any of my "tender" body parts. I thought it might bother my knee but would be easy on the hip. But there was only one way to find out.

I hopped on my machine and after 3 minutes, I could tell it wasn't going to be great for my knee. But obviously, since I decided I was going to do 30 minutes, I pressed on. (Ha.) I slowly increased the incline and resistance but didn't go too hard. I really hate machines but I had a good Big Brother pod cast so that made the time go by a little more quickly.

Finally, I was done. Knee was feeling pretty weak. I should have worn my brace. I feel like it would have given me a lot more stability. 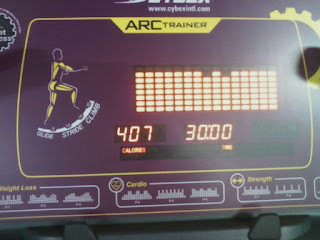 Can we just talk about how I totally did not burn 400 calories in 30 minutes? My guess is more like 250.

When I stepped off the Arc Trainer, I felt like if I had started running, my knee would have collapsed. Damn! It never felt weak when I ran. This Arc Trainer is no joke!

Oh, did I mention that my back was KILLING me!? I got my period that morning, and for the first 18 hours of my period, my lower back hurts so bad. When I stepped off the Arc Trainer it hurt EVEN MORE! Uggggggggh being a woman of menstruation age suuuuuuuuuuuucks.

I went over to the room with the mats and floor space to do some core work and stretching. The more I stretched, the stronger my leg felt. I got it to the point where it felt pretty normal. (I even iced it when I went home and it felt so-so.) My back also felt a little better after I stretched but not great. There was just so much pressure there. I needed a massage. 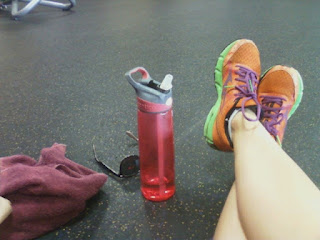 Right when I laid out my mat for core work and got into cat camel position, I started to get REALLY MAD. I felt so mad I wanted to PUNCH someone. You know what was making me mad?

My face felt disgusting because I had worn makeup to the gym. (Not my usual style but I had already had it on for piano lessons and I didn't want to wash it off and look all splotchy at the gym because Paul was there.)
.
My shorts were a little too big so I could feel them. You know what I am talking about?

I wore a cotton tank instead of a moisture wicking tank. It felt so gross.

Yah, that's why I wanted to punch someone out. Don't worry, I didn't. Instead, I did a bunch of  core stuff.

Here's the core work I did. It's just the usual stuff...

I normally do core only on the days I lift, but I had 13 chicken nuggets from Wendy's and Kraft mac and cheese for dinner the night before. And since I have been pretty happy with how my stomach has been looking lately (even though I eat Twizzlers every night), I kind of felt like I wanted to keep up with it and keep "honing in on the abs". It is bathing suit season, right!!??

Do you ever use the Arc Trainer or other cardio equipment besides the treadmill?

Tell me your period woes!

How often do you do straight up core stuff?
Posted by Meg Go Run at 5:30 AM