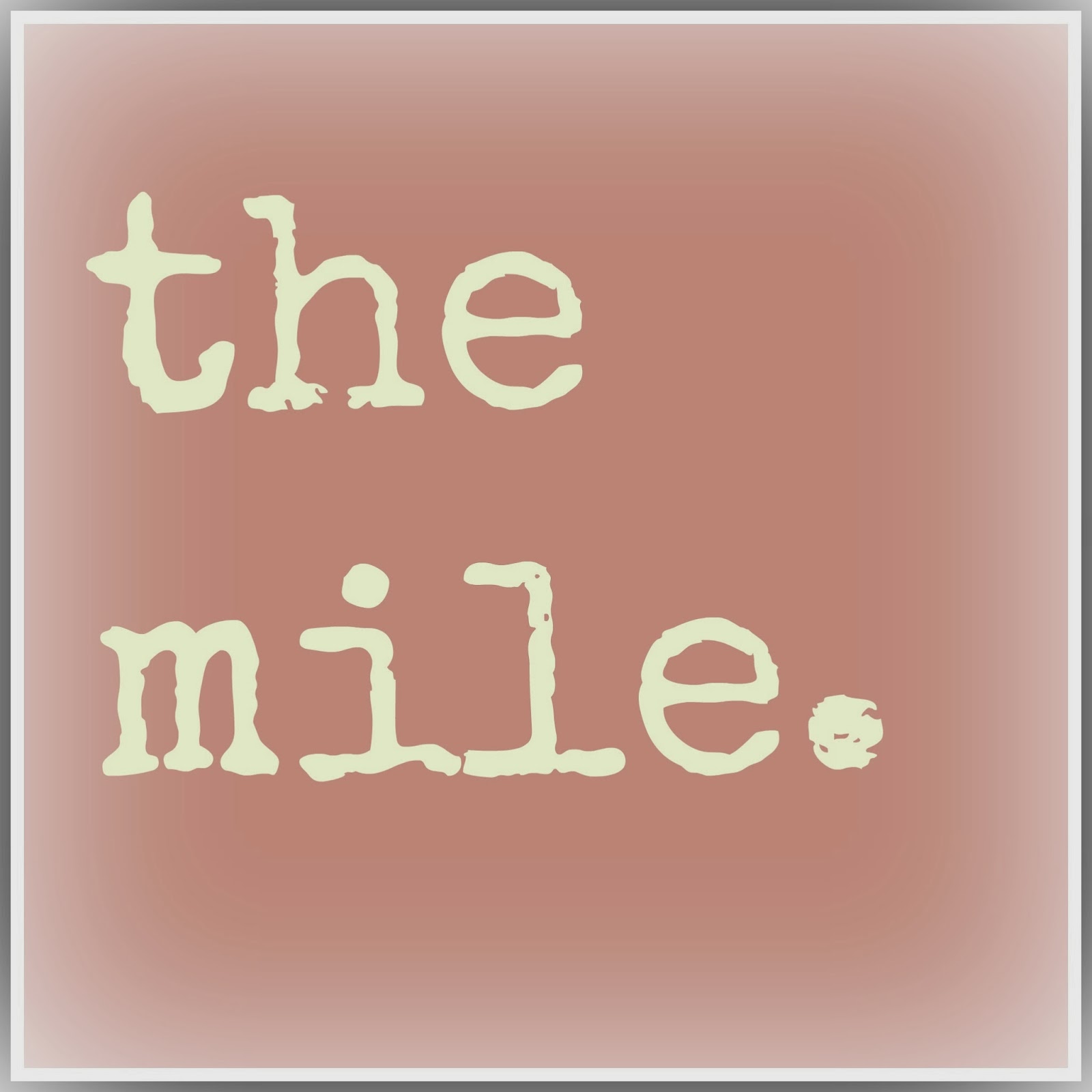 This may not be a normal blog post. I'm a little high right now! Not high on drugs, but high on endorphins, high on life, and maybe a little high on the cranberry vodka drink I made for myself... 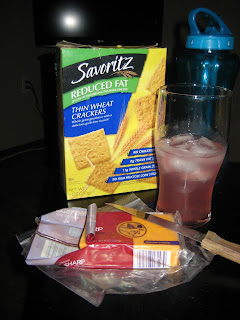 This is what I ate (well the first thing I ate) after the mile.
Notice, there IS water behind that yummy cranberry concoction!

Let's start with the good!

What made the night even more awesome was seeing so many friends freaking ROCK IT OUT that night. It was so hot out, but I swear, every single one of my friends, and every single new person I met, ran their personal best or reached their goal. I am honored to know such highly motivated, hard working, athletic people.

My husband and parents came to cheer me on. I am so lucky to have their support. My parents came all the way from MILLERSBURG to see me run for a little less than six minutes. They're awesome. You know, the older you get, the more you 'preesh your parents and all they have done for you. After the race, my mom told me I always do what I set out to do. I say the reason for that is because I have parents who taught me that if I work hard for something, I can achieve it.


Now for the bad!

Not the bad, but the tough. It SUCKS running the mile. But I will tell you what sucks more than running the mile. Waking up at 8am and stressing out about it until 7:15pm. Seriously, I was useless yesterday. I tried to keep myself busy, but it was hard. I couldn't workout, I couldn't eat dinner, I had to drink tons of water (because of the heat) which made me have to pee all day. I had to try to stay energetic yet not do anything that would make me too tired. I had to carefully weigh every piece of food I put into my mouth. I was so, so, so, so, so, so anxious! And I don't think I will ever run a race again in which I have to wait until the evening to run it. It is just horrible!

But you know what? It's all part of the process. The preparation is part of the race, too!

This is what I ate before the race:

That's like... the weirdest eating ever. For me, anyway.

Anyway, the whole day pretty much revolved around the race. I am lucky it is summer and I could make my whole day revolve around it. (Geez, now I feel bad for complaining.)

Okay, enough complaining. Let's cut to 7:05pm, when all male and female 30-34 year olds lined up at the start. I wanted to get right in front because I didn't want to lose seconds trying to get around someone. Oddly, most people hung back . There were only about 3 people right on the start line, and they were all girls! (One was me.) The other two girls looked really hard core. The one right beside me was tall, muscular, and rocking booty shorts and a sports bra. (I'm going to call her Black Sports Bra Girl, BSBG for short!) She was doing bounding jumps to warm up, and even practiced her start- she sprinted about 25 meters before the real start of the race. It was intimidating.

I decided my goal would just be to simply keep her in my sights! BSBG was clearly telling us in her own way to WATCH OUT.

I was minding my own business, but she leaned over to me and said, "What's your goal today?"

Ahhhh... she was eyeing up her competition! Was I intimidating to her? I played it cool. "I just want to PR," I said. Very non specific.

"What would that be for you?" BSBG pressed.

Augh! I had to tell her. "Anything lower than a 6:12, but that was four years ago," I said, trying to sound very easy breezy.

She nodded. I could tell she didn't find that threatening. Whew!

1/4 Mile - As I approached the 1/4 mile marker, I saw the time. 1:10. 1:10!? No, no, no, I was running too fast! I was near several people at this point so I exclaimed, "We all better slow down!" I don't know why I said it out loud but I did. BSBG was behind me at this point and there was one other woman right in front of me. A few men were sprinkled in there. I was glad I could hang with the fellas at least for a little bit!

1/2 Mile - I slowed down on purpose. There was no way I was going to keep up that pace, but I was glad I went out strong and bought myself some time. I was still behind the 1st place girl and BSBG was behind me. This was the point my mouth got so dry. I wasn't thirsty, my mouth was just extremely dry. Physically, I was pushing myself, but I was okay. I could keep this up for a little while longer, I was sure. I approached to 1/2 mile marker around 2:35. Lookin' good!

3/4 Mile - My hubby shouted for me during this stretch! I sucked in his energy but didn't waste any of my own by shouting back like I normally do. BSBG was right behind me. Oh, and there was NO CLOCK here! I was astounded. There was supposed to be a clock every quarter mile, and the 3/4 mile one was pretty darn important. That was going to tell me whether I needed to crank it up a little or A LOT. Oh well, I was just going to have to err on the side of caution and push the pace a little. It was getting hard. I was breathing pretty loud, my mouth was parched, but with only a quarter mile left, it was time to suck it up!

4/4 Mile - The cool thing about this race is that the last quarter mile is ever so slightly downhill, AND you can see the finish line and the crowd from about .2 miles away. It was so helpful and motivating at that point to have the ending in sight. Hearing the cheers and seeing the crowd literally made the pain go away. I felt no pain at this point. I was pushing myself as hard as I could, but it didn't hurt. It was like I was in a vaccuum. That's the only way I can describe it.

This is where BSBG kicked it into gear. I gathered that she was simply tailing me the whole way and planned to pull ahead at the very end and take second place. And while my goal was never to place, (just simply run a sub six) being so close to second place was starting to feel pretty good. But it seemed like BSBG had some more energy in her, and she went right past my left shoulder. I kicked it into gear too, and we pretty much ran neck and neck the last .1 miles. The first thing I said to myself was: "Of course she will beat me. Look at her. She is so hard core, with her warm up jumps and sprints and black sports bra." And then the next second I said to myself, "Wait a second, why not me? WHY NOT ME?" I kicked it in as much as I could, and for some reason, I was faster than her and I beat her by less than a second.

She was awesome. If it wasn't for her, I would not have pushed myself so hard at the end. BSBG helped me PR! I hope she PR'ed too. It is cool getting second place, but how I did against others really means nothing. What matters is how I did against myself, and I know that all sounds touchy-feely, but I really mean it. Running is such an individual sport, and I would rather run a PR than place. (But doing both is cool too!)

**Side Note: It was pretty darn hot that night- 96 degrees? But I don't think the heat affected my run. I do not remember feeling hot during the race. I was just sure to hydrate all day long. If anything, the heat was just psyching me out all day. I thought maybe my goal was a little too lofty in such crazy weather. But then again, I am used to running in the scorching temps!**

I realize this is a way too long post about a run that was only a mile long, so I apologize. I also apologize if I was a little more lax with my writing. My mind is just going a mile a minute right now!

Congratulations to all of my friends who ran last night! You know who you are! :o)
Posted by Meg Go Run at 7:16 AM

Email ThisBlogThis!Share to TwitterShare to FacebookShare to Pinterest
Labels: races, running, The Mile