So apparently, I am committing a weight lifting sin. Are you ready for this one?


I wear gloves when I weight train.


That's right. These cute little purple ones I got from Target about a year ago. 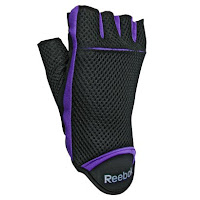 My trainer told me it was okay to wear gloves if my hands hurt. And of course, being new to lifting weights, hurt they did. So for the past year, I've been rocking them at the gym and not thinking a thing of it.

1. They help prevent callouses. I still have callouses but they are not huge. If I didn't wear gloves, my hands would be a lot more rough.

2. I like having a buffer between me and the weights/floor/mats. Think of all those grubby hands touching the dumbbells...

3. My hands hurt when I don't wear them! Not a lot, but it's not as comfortable to lift without them.

4. Sometimes my hands are really sweating, and I can't get a good grip on the pull up machine unless I wear gloves.

The only thing I don't like about gloves is that they STINK after a workout.

A couple months ago, I started reading fitness blogs, and as it turns out, a lot of people firmly believe you're not supposed to wear gloves when you lift! The main reason is that wearing gloves makes it easier to grip the weights. (Wait a second, that's ones of the reasons I like them!) So instead of your body developing grip and forearm strength, the gloves do the work for you.

Well, that is something to consider.... But I am not that concerned with what my forearms look like... nor will I be walking across the Grand Canyon on a cable anytime soon, so who cares how strong my grip strength is? (You know, because when I lost my balance I would have to hang there for a few minutes until a rescue chopper came...)

But I do want to  be strong all over, and if grip strength is part of it, then that's something I have to think about.

Then there's issue of callouses. A lot of people (girls included) like having callouses on their hands because it makes them feel bad ass and strong. Not me. I don't need callouses to "prove" myself. I already have scars from branches on the trail, several missing toe nails, and chaffing marks on my back from my hydration pack. I do not need another body deformity caused by my exercising, thank you very much!

On Wednesday, I forgot to bring my gloves into the gym with me and I didn't feel like going back out to my car to get them. I decided to push through the workout anyway. I did chest/back/legs, so there was a lot of gripping of dumbbells that day. Chest press, dumbbell row, pull ups, squats, lat pull down... It was uncomfortable but not too bad. I do have some gross callouses at the moment, though!

I got the opportunity to ask my friend's husband whether he wore gloves or not. He's HARDCORE- really in shape and lifts all the time. He goes to GOLD'S GYM, so you KNOW he's LEGIT. (I don't know why I am typing in caps so much. I guess I just want to get across the fact that I value his opinion.) I was totally prepared for him to say, "No way, I don't wear gloves! Only sissies wear gloves!"

But in fact, he DOES wear gloves. He says it makes him able to grip the dumbbells better and that he has more control over them. I asked him if other people at Gold's wear gloves, or if anyone has ever said anything about him wearing gloves. He said, no one has said anything to him, and he doesn't even notice if people wear them or not. Then he told me I shouldn't worry about what other people think of me in the gym.

Do you wear gloves when you weight train? Why or why not?

Email ThisBlogThis!Share to TwitterShare to FacebookShare to Pinterest
Labels: I'm a sissy because I wear gloves when I weight train