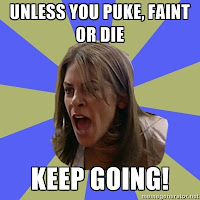 Since I am not a morbidly obese Biggest Loser contestant, I guess it's a long shot that I would ever be able to train with her. However, I can listen to her pod casts. They're free on iTunes. I am learning so much from her. She is also reiterating things I know to be true, I just haven't had the self discipline to do yet.

I know my taste buds will get used to it. I'll probably get to the point where I'd rather puke than add a ton of salt to something. And it would be SO MUCH healthier!

Too much salt in your body causes you to retain water. This makes your heart and blood vessels work harder, which could lead to high blood pressure. The part of me that's superficial also hopes a couple more of my abs will peak out if I stop flying fast and loose with the salt...

2. I need to start eating organic fruits and vegetables. Especially if they do not have a thick skin.

My #1 Excuse For Not Eating Organic: It's expensive!!!

Yes, it is. It's expensive to eat healthy in general even if you don't buy organic. (Have you seen the price of Greek Yogurt lately? Thank goodness for Aldi!!!)

Jillian's response? Chemotherapy will be even more expensive when you get cancer from all the pesticides.

Then I did some research, and realized there are so many more reasons to buy organic. Reasons I really care about. I wish it wasn't more expensive, but maybe I could slowly start incorporating organic produce. And while I'm at it, I should buy organic meat too. I eat a TON of chicken breast. And what about eggs?

What does this all mean?

Boy did Jillian give me a lot to ponder. I think cutting sodium and  incorporating organic foods would be two great goals to start in September. (I'm currently on a "no artificial sweeteners detox" so I don't want to start anything new until I have a firm handle on that.) It just occurred to me, since I won't have to buy salt anymore, I can use all the money I saved on that to buy organic!


And look, I already bought my first carton of organic eggs!


I had to run the whole organic thing by my husband. He was fine with the eggs- they were only 70 cents more, and I explained how happy the chickens were that laid those eggs. And that I would be happier eating eggs when I knew the chickens were happy. But then we checked out the organic milk and noticed it was $5.99 a gallon!!!! That's when he asked if I was planning to get a credit card to start financing this whole organic endeavor. (He also told me that from now on when I'm making egg whites, if I accidentally drop a yolk in, I can't dump the whole thing out and start over... which I've been known to do! Super-saver-egg-mode!)

Jillian Michaels is a miracle worker. Ask anyone who knows me, or who eats lunch with me at work. They know I love me some salt. I never thought I would try to reduce my sodium intake. And buying organic? Just a month ago I only washed my produce like half the time! (I'm so gross, I know it.) She is just so darn persuasive!

I'm going to think about making these September goals. They're not goals yet, but they're almost goals.

Maybe you can convince me!

Convince me to cut sodium and buy organic!!!!  (The best way to do this is to tell me there's no way in hell I will succeed. It will make me want to RUB IT IN YOUR FACE when I conquer salt and organic foods! MUHAHAHAHAHA!)
Posted by Meg Go Run at 9:21 AM