My husband and I like to call every day errands "dates". Usually it's because it will be our big outing for the day/night. Don't worry, we go on actual dates, too. We love picnic dates, going for walks, and getting sushi.

On Monday, we decided we had to go to Wal-Mart. It's usually a pretty annoying trip, but it is nice to be able to stock up on things that are a lot cheaper to get there... TP, cat litter, cat food, protein powder, my cereal.... We just load up our cart to the brim and hope we got enough so we won't have to go back for a month.


We thought we were going to head out for our "date" around 3pm, but then my husband had a great idea. Why not wait until 9 or 10pm to head out. That way there will be no traffic and less people. And the people who would be at Wal-Mart at 10pm would be pretty entertaining, so it would be fun, too!

We weren't even in the store for two minutes. I was looking at nail polish and my husband was waiting patiently. A group of teenagers barreled down the aisle. Bringing up the rear was a scrawny guy, running to keep up, yelling, "Hey guys! Let's get some K-Y!!!!!"

I didn't even try to hold in my laugh. I let it echo throughout the store. I could tell it was going to be a fun trip! 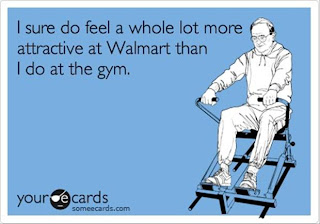 Something that surprised me was the amount of kids in the store. Like, young kids who should have been in bed at that hour. There must have been a birthday party going on in one of the aisles because there were a bunch of kids screaming and running around and having a grand old time...

The rest of our time in the store was pretty uneventful. That is, until it was time to check out. My poor husband got sucked into a conversation with the cashier. She was the type of cashier that liked to comment on the things you're buying, and my husband is the type of man that is nice and polite to everyone. Well, his cart was filled to the brim with cat litter, so of course the cashier started to tell him about all the litter boxes she had, and how she got two of her cats from Molly's Pet Rescue so they didn't mind sharing a litter box, but then she got her mom's cat when her mom went to the home, and that cat started peeing all over the house.

Then things got weird. It wasn't that she started to talk about her cat pooping, but it was how she pronounced it. She didn't say "poop", she said, "puhp". Like, sort of rhyming with the word "up" but with a little more "uuuuhhhh" in it. I haven't heard it said like that since I was probably in elementary school!

She says: "Yeah, first he was just puhping on the floor, and it was okay when it was just puhp, because it is easy to clean up puhp. But then he started peeing."

This time, I was nice and held in my laughter until we got to the parking lot. My husband somehow graciously wrapped up the conversation without letting the lady know that he thought she was a wacko. That's just the kind of guy he is, and that's why I let him to take me out on a fancy date to Wal-Mart!

Anyway, that was our big date on Monday night!


What is your craziest Wal-Mart experience?
Do you go on "errand" dates with your significant other?