I can be stubborn. REALLY stubborn. So stubborn that I banned a whole store for over a YEAR!

On July 8th, 2012, I banned Weis Markets from our lives. It is easy to remember the date. It was my 30th birthday and also my friends got married that day.

I did not inflict this ban on a whim. I experienced many, many awful trips to Weis. The trip on that fateful day was simply the straw that broke the camel's back.

Here's the story! (I know you're dying to hear it!)


I'm pretty quick in grocery stores, and I had to be on that particular day. I needed to get my shopping done, then go home and get ready for the aforementioned wedding. Everything was fine until shit hit the fan at the check out. (It always does.) First of all, it was a Sunday afternoon and there were only two lanes open. Really!? Self check out was open but what most people don't know is that the self check out at Weis NEVER WORKS and it ends up taking longer than if you waited in line for an actual cashier to ring you up

I eyed the clock, then bit the bullet and gambled on the self check out. Of course, something didn't ring up correctly. I got some yummy gourmet buns from the bakery that were supposed to be free because I bought 1 pound of turkey. There was a sign stating this sale, and I took great care picking out just the right buns that I thought my husband would like. (I would have never gotten those expensive buns had they not been free.)

So I go up to the self check out counter. There stood a bored looking teenager. I explained my dilemma about the buns.

She was clearly very uninterested in solving my problem. "Where did it say the buns were free?" the Bored Teenager asked through squinty eyes.

Me: "There was a sign right on the counter at the deli."

Bored Teenager: "Oh, okay... well, they're not ringing up free."

Me: Nevermind, I don't want the buns then.

I didn't have time for that shit! But of course, it took a few minutes for the girl to void my bun purchase. In the meantime, another clerk was bagging my groceries. You may think this would be nice of them to do, but it is not. Weis (like Wal Mart) is NOTORIOUS for using as many plastic bags as possible.

It's a legitimate fear.

So finally I pay, pick up my 15 plastic bags (even though I probably really only needed 3) and head home. I put the groceries away and notice.... THE ONE POUND OF DELI TURKEY IS NOWHERE TO BE FOUND!! (You know, the pound I bought and then tried to get the free buns?)

I drove back to Weis. I stood in line at the customer service counter for over 10 minutes. Finally, it was my turn and they gave me my turkey.

Me: "Do you have any idea how the turkey failed to get into my bag?"


And from that day forward, the Weis store has been BANNED!


Do you think I over reacted? I don't. I wrote them a letter, but didn't get any response. (I hear Giant sends you a gift card when you mail them a complaint.) Weis Markets just ignores you. And remember, this was not my first, second, or third bad experience at Weis Markets. It was simply the last time I was going to let them crap on me!

Why have I suddenly lifted my ban on Weis?

Well, my friends, my husband really likes the Weis. And since he is not driving right now, (He did not have his license revoked or anything like that!) he can't go there. No way am I driving there! But I was feeling especially loving a few days ago when we needed to run some errands and I told him that if he really wanted to go to the Weis store I would take him.

He was so happy!

We went in and grabbed a few things. We had no unfortunate incidents. I even discovered some yummy Weis Quality prepackaged angel food cakes that had only 70 calories and 16g of carbs.

But Weis is still up to their old "Let's Use As Many Plastic Bags As We Can" shenanigans. 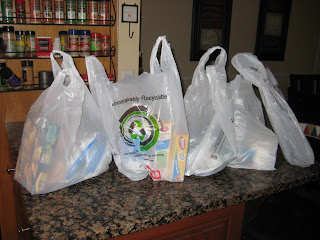 It took the cashier 5 plastic bags to bag my items. 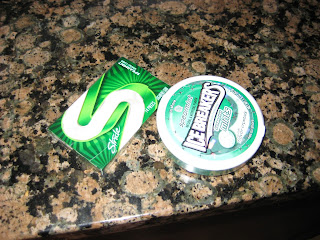 She put a pack of gum and a pack of mints in one bag. I am totally serious. 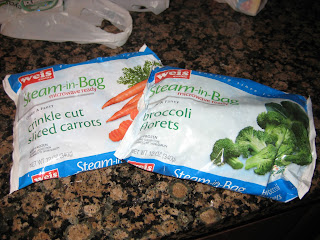 Another bag had two 12oz bags of vegetables. That's it. 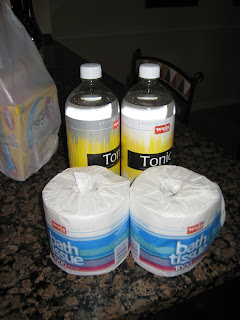 A third bag had two 1 liter tonic waters and two rolls of toilet paper.
That's nothing! 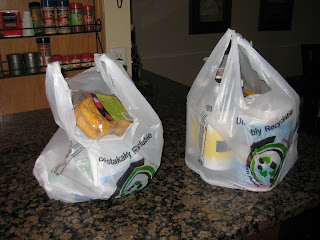 The other 3 bags were semi full- BUT LOOK!
I successfully bagged all of my items into only TWO grocery bags!

You probably think I am crazy now, but using too many bags is one of my big pet peeves.

So that is my story about how I banned Weis for over a year and how I am temporarily giving them a second chance. Honestly, the only reason I am being so lenient is because of those deliciously low carb angel food cakes...

Have you ever vowed never to step foot into a store again?