Hey everyone! After a very successful (and relatively short!!!) visit to OIP yesterday, I finally figured out what is wrong with my knee!

First of all, Dr. Himmelwright was AWESOME. He was very informative and energetic. It's like he was on 10 cups of coffee. I LIKE THAT! And he understands athletes. I LIKE THAT TOO!

(Oh, by the way, when he looked at my X-rays he said I have BEAUTIFULLY aligned knees. Woohoo!)

There are 4 ligaments that help stabilize the knee. They are pictured below. One of my problems is that my left Lateral Collateral Ligament (LCL) is a lot more stretched out than my right Lateral Collateral Ligament. Doc figured this out by holding onto my ankle and moving the lower portion of my leg out. It was very clear- I could see my left leg would move out a lot more than my right leg.

He said my LCL is getting inflamed, and it doesn't really flare up during activity, it's after activity (like when I'm simply sitting on the couch) that it flares up and bothers me. It's not that common to have an irritated LCL because it's actually the Medial Collateral Ligament (MCL) that absorbs more of the shock involved in running, jumping, etc.

From what I read about injury to the collateral ligaments, it appears that they are usually injured due to a blow to the side of the knee. This isn't my case, as there was no one "event" that caused this. I think it's just an overuse injury.

To help heal this injury, Doc gave me a bad ass brace to wear for the next month. It is designed to lessen the load on my ligaments. I'm supposed to wear it whenever I'm working out, walking around, or being physically active. What the brace will do is pretty much give my LCL a break from a lot of the work it's used to doing. He says I can run, weight train, whatever... I'm just supposed to wear the brace. 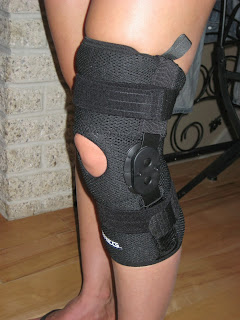 My bionic knee.
Our insurance company is probably loving us this year.
And by loving us, I mean hating us. 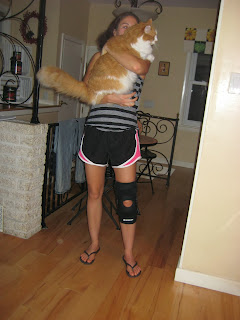 I decided I am going to try to lay off the running for a month and do more low impact stuff- like spinning, and maybe a few sessions on the elliptical or arc trainer. I really want to baby it as much as I can for a month to see if that heals it. I still have some more Googling to do to see what types of lower body weight training exercises are okay to do. Even though the doctor gave me the go ahead to do whatever, I want this to get better quickly and not become a recurring problem!

What if wearing the brace doesn't help and my knee still hurts after a month?

Good question! Well, then it is time for an MRI to rule out everything else other than my LCL (whose elasticity is not going to show up on an MRI) and a plica.

What's a plica? Another good question! It's something we all have, it's just mine is irritated and inflamed. Two irritation/inflamations!? Bring it on!

Instead of explaining a plica, I shall copy paste some information from this website, as they explain it better than I could, and I'm feeling lazy.

Plica syndrome is an interesting problem that occurs when an otherwise normal structure in the knee becomes a source of knee pain due to injury or overuse. The diagnosis can sometimes be difficult, but if this is the source of your knee pain, it can be easily treated.

Plica is a term used to describe a fold in the lining of the knee joint. Four plica synovial folds are found in the knee, but only one seems to cause trouble. This structure is called the medial plica. The medial plica attaches to the lower end of the patella (kneecap) and runs sideways to attach to the lower end of the thighbone at the side of the knee joint closest to the other knee. Most of us (50 to 70 percent) have a medial plica, and it doesn't cause any problems.

A plica causes problems when it is irritated. This can occur over a long period of time, such as when the plica is irritated by certain exercises, repetitive motions, or kneeling. Activities that repeatedly bend and straighten the knee, such as running, biking, or use of a stair-climbing machine, can irritate the medial plica and cause plica syndrome.

Injury to the plica can also happen suddenly, such as when the knee is struck in the area around the medial plica.This injury to the knee can cause the plica, and the synovial tissue around the plica, to swell and become painful. The initial injury may lead to scarring and thickening of the plica tissue later. The thickened, scarred plica fold may be more likely to cause problems later.

The primary symptom caused by plica syndrome is pain. There may also be a snapping sensation along the inside of the knee as the knee is bent. This is due to the rubbing of the thickened plica over the round edge of the thighbone where it enters the joint. This usually causes the plica to be tender to the touch. In thin people, the tissue that forms the plica may be actually be felt as a tender band underneath the skin. In rare cases where the plica has become severely irritated, the knee may become swollen.

Diagnosis begins with a history and physical exam. The examination is used to try and determine where the pain is located and whether or not the band of tissue can be felt. X-rays will not show the plica. X-rays are mainly useful to determine if other conditions are present when there is not a clear-cut diagnosis.

If the history and physical examination strongly suggest that a plica syndrome is present, then arthroscopy may be suggested to confirm the diagnosis and treat the problem at the same time. Arthroscopy is an operation that involves inserting a small fiber-optic TV camera into the knee joint, allowing the surgeon to look at the structures inside the knee joint directly. The arthroscope allows your surgeon to see the condition of the whole knee and determine whether the medial plica is inflamed.

If all nonsurgical attempts to reduce your symptoms fail, surgery may be suggested. Usually, an arthroscope (mentioned earlier) is used to remove the plica. The small TV camera is inserted into the knee joint through one-quarter inch incisions. Once the plica is located with the arthroscope, small instruments are inserted through another one-quarter inch incision to cut away the plica tissue and remove the structure. The area where the plica is removed heals back with scar tissue. There are no known problems associated with not having a plica, so you won't miss it.

The information I copy pasted from the website describes a lot of what I'm feeling except it's on the lateral (outside) portion of my knee, not the medial (inside) portion. The snapping band like thing- I have that! Though I do not have swelling or anything like that.

And like the website suggests, if it doesn't get better via anti inflammatory cream (which I have) and rest (the brace), and the MRI rules out all other problems, I'll have my knee scoped to remove the irritated plica.

(Oh, Paul told me all the NBA players get their knees scoped to remove plica. So I'm in good company I guess!?)

What is the recovery like if you need your knee scoped for plica?

The doc said I'd be on my feet doing low impact activities in a few days and then I would just have to ease back into running. Sounds good to me!

So I am hoping that I can get this all straightened out in 1-2 months!

In the meantime, if you see me out running, or blogging about a run I went on, yell at me! Tell me to rest my knee and get my ass on my spin bike!


PS. The most amazing part of the day was that I was in and out of OIP in just under an hour and fifteen minutes. CRAZINESS!!

PPS. Sorry if there are typos and sloppy writing... normally I sit on a blog post and edit it a few times before posting, but this one was written quickly!

PPPS. I carbed up on Pringles and vanilla ice cream last night in preparation for the AWESOME BIONIC KNEE SPIN WORKOUT I'm going to do today!!!

Have you ever had your knee scoped?