Saying goodbye to our Basey-Girl.

I didn't want to get up this morning because our little Basey Girl is not here. Some people think having 3 cats is a lot, but it's not. Even when they're not in the same room with us, we can feel their presence. Christmas and Jelly are here. Not in the room with me, but they are out and about in the house. But Basic is gone. She's not in cat, heaven, she's not waiting for me at the end of a freaking rainbow bridge. She's just gone. It happened so quickly and we'll never see her again. This is one of the worst feelings in the world.

Let me first tell you what happened, so I can get that out of the way and tell you a little bit about Basic. Paul noticed Basic limping a little this past Tuesday. We took her to the vet and they tested her. She had a UTI, so they put her on antibiotics and pain meds. Unfortunately over the next couple days, she did not get any better. She did not move around, jump up or down, or let us pick her up. She was in pain. We assumed it was from the UTI, so Paul took her back to the vet yesterday to figure out how to fight this thing and get Basey Girl better. Sadly, the UTI was a secondary problem to the fact that she could not move her legs properly (or it hurt REALLY bad to do so) to go in the litterbox due to a very large tumor on the 3 vertebrae that are pretty much the most important vertebrae in a cat. The tumor was affecting a nerve that controlled the movement of her legs. They discovered this on an X-ray yesterday afternoon. She was in extreme pain. Even though they gave her the highest dose of pain meds they could at the hospital, she was more than uncomfortable. We had two options, which I learned of when I got home from work yesterday. We could take her to Virginia, at a state of the art animal hospital to see if they would operate. Our vet said they most likely would not operate on her because the risk was so high. If they did operate on her, they would not be able to take the whole tumor out (uggggh where did I hear this before!?) and they couldn't guarantee that she would a. survive, b. not be in pain, c. survive but not live much longer at all.

You know we would spend any amount of money on the cats. It wasn't the money. It was the fact that we would have to put her through a couple days of painful, scary travel, have a surgery, and then wake up and be in pain again anyway. That was our first option, and it wasn't a good one. The second option wasn't good either. The second was option was that we would have to say goodbye to Basic that evening.

I wanted to bring her home so bad for one more night at home with us, but we were told it would be selfish, and I understand that. I just wished there was some sort of super pain med that would take her pain away for one more night, but there wasn't. We had to go to the hospital and say goodbye to her last night.

Now I want to tell you about how awesome Basic was, because she certainly was an interesting cat- nothing like Christmas and Jelly. 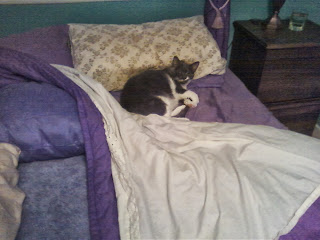 Sleeping in my spot on the bed!


Basic lived a colorful 13 years. Paul got her when she was 2 years old from a pet store in York and she lived with him ever since. 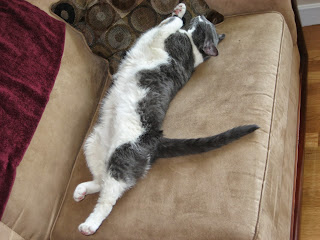 
Basic hated me when she met me. It was nothing personal, she didn't really like anyone but Paul! She was a "pet at your own risk" type of cat. I can't count how many times (as recent as a few weeks ago) where I would pet her, she would purr her ass off for a few minutes, and then suddenly screech and bite me! (Not hard, just a warning.) It was like she couldn't just give a warning growl- she was a drama queen and liked to flip out right away!

Speaking of being a drama queen, Christmas and Jelly bothered her sometimes. They would chase her into a corner and she would hiss and growl. Sometimes she didn't like it, but I think other times she did like the attention. She never really bonded with Christmas because he is the dominate cat in the house. But Basic and Jelly have been known to curl up together on the couch or bed. Most of the time they'd have 2 feet between them, but on a rare occasion, they'd be almost touching!! 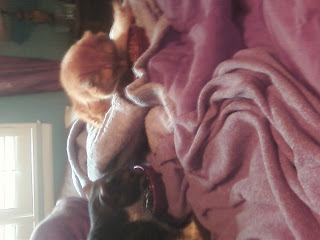 A rare shot of Basic and Jelly eating right next to each other on the bed.
Yes, they have eaten on our bed. We wouldn't want to bother their slumber
to make them jump down... duh! 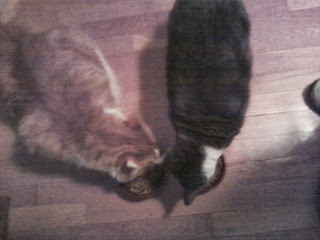 WOW I can't even believe this happened and they both lived to tell about it.
Seriously, Basic and Christmas NEVER got this close.
She must have been so hungry that she didn't care!


It took awhile for Basic to love me. I remember spending the night at Paul's apartment and waking up in the middle of the night. Basic was sitting like six inches from me on the bed, and she growled and hissed at me. Boy was I freaked out! Even when we moved into our house, she still didn't warm up to me for a couple years. I never gave up on her, and slowly but surely I became her mommy. She loved Paul with all her heart, and he was always number one, but I was a close second!

Even though she only liked to be pet on the top of her head, she did like to cuddle. She slept between Paul's legs every night for years. For the past several months, she's been cuddling on my lap every chance she got. In fact, if she was here right now, she'd be laying on my lap in front of my lap top, getting in my way as I tried to type this blog!

Speaking of technology, Basic LOVED technology! She loved cords, remote controls, computers... ANYTHING. If he could lay her head on a computer cord, she was in heaven. I know, it is silly, but she always gravitated to those types of things. 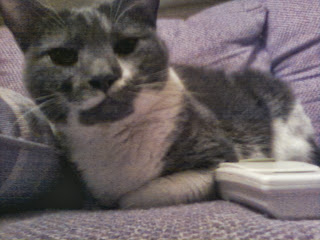 
Here are some other things Basic loved... 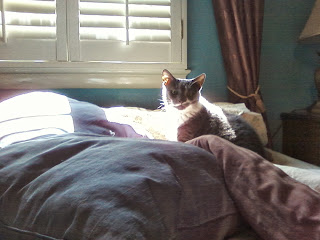 2. Getting hopped up on cat nip and playing on the cat condo 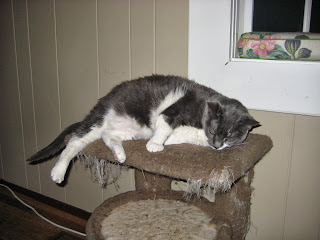 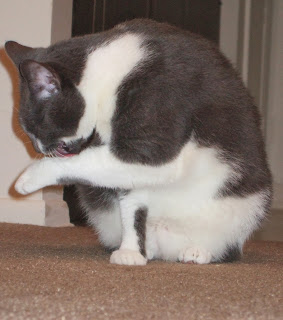 4. Watching the squirrels and birds outside on our bay window 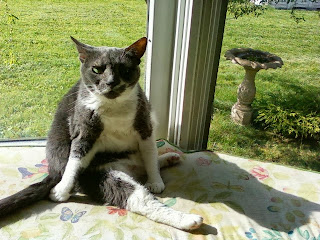 5. Sleeping in the tubs I keep my pjs in under the guestroom bed 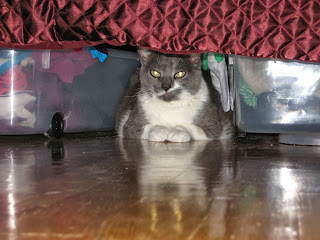 I guess she didn't feel like actually getting IN one this day! 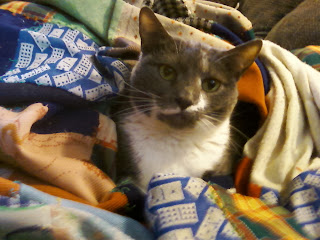 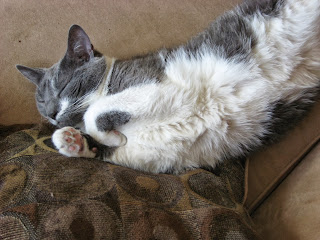 9. Playing in the basement with her daddy 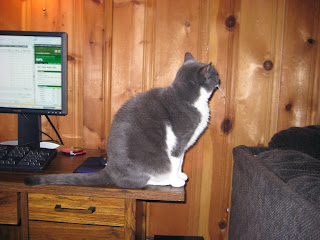 10. Propping up on pillows. 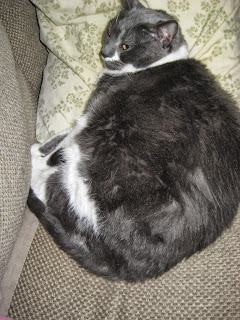 She was 13, but she was a young 13. You didn't look at Basic and see an old cat. She slept a lot, but she moved around the house and did things too. She loved to eat wet food. It's going to be weird getting out only 2 plates for wet food now.

There are probably going to be a ton of typos in this post but I can only bare to re read it one time. I'm sad. I don't want to think about Basic because it makes me sad. But then I feel bad for not wanting to think about her. I feel guilty petting the other cats and loving them because Basic is not here to be loved. I worry if I don't pick the best pictures of her to post in this blog, it means I don't care about her. It is all ridiculous, but that is what I am feeling right now. Guilt. I miss her. I can't even be strong for Paul (he's loved her longer than me) because I am grieving too.

Basic was a member of our little family and we still love her so much. I don't want to forget her, but I don't want to be sad anymore. I guess I just have to take each day at a time but it's so hard. Anyone who has lost an animal they love knows what I'm talking about. Our situation isn't special. 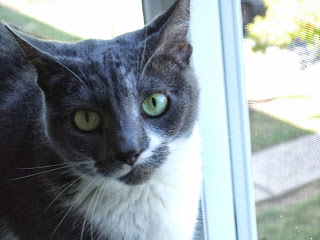 But it is special, because she's our little Basey-Girl :)
The one and only!