Standing Up for Female Runners (How I taught a douchey teenager a lesson!) 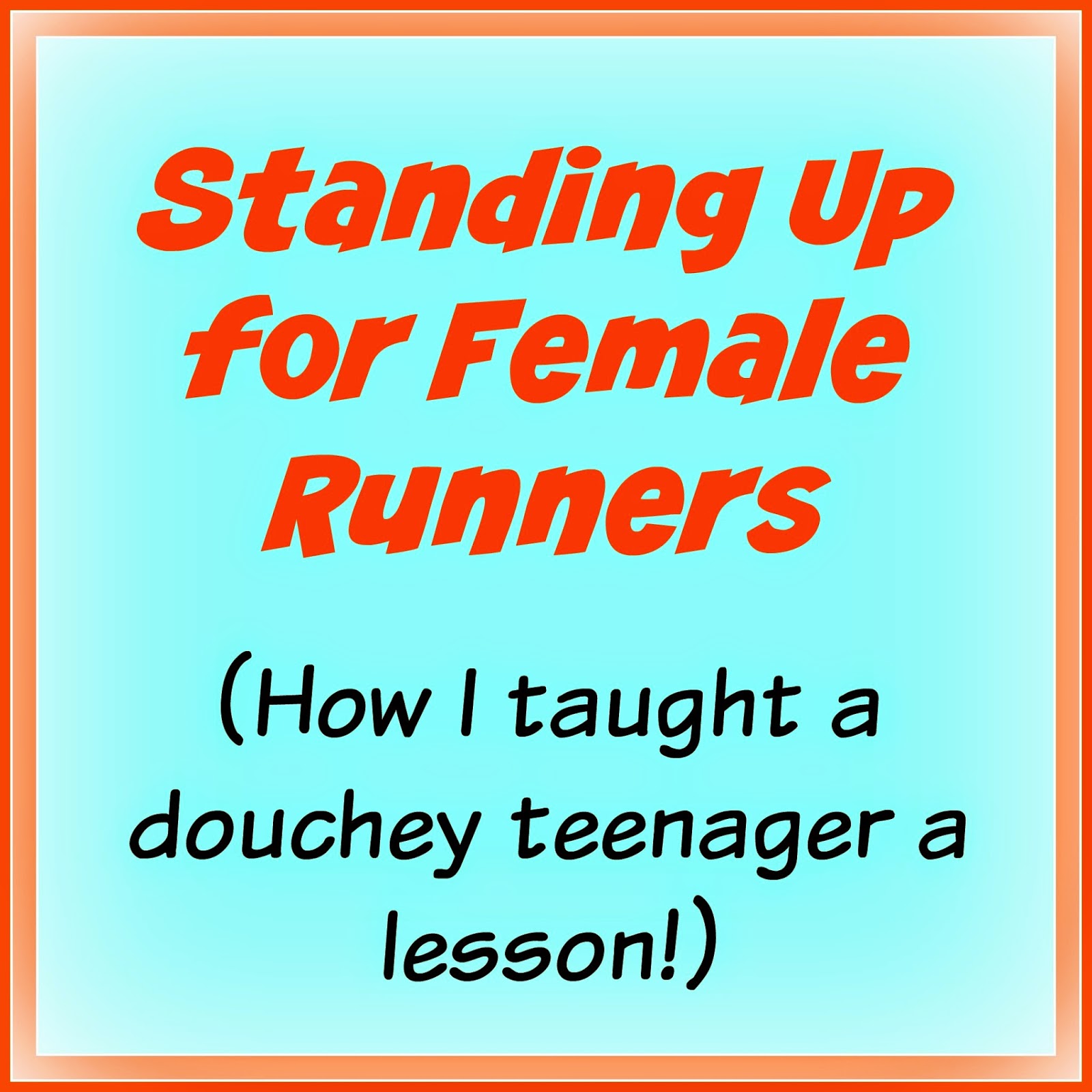 I have a story that I am just going to jump right into!

During my morning runs I pass several bus stops. Around mile 3.5 of my 5 miler, I pass a high school bus stop on my way into a little neighborhood. I pass it again around mile 4 on my way out of the neighborhood. I have my headphones on, but since I listen to podcasts, I can still hear what is going on around me. Twice in the last week and a half, someone from the bus stop shouted at me. They didn't shout right when I ran by- they waited until I was almost half a block away. Then they would shout something like "RUN! KEEP RUNNING!" You know, just to be douchey. I ignored the person both times. (Sometimes, it is best to not give attention to behavior like that. Teacher strategy...)

Well, yesterday morning, right after I ran past the bus stop into the little neighborhood, someone yelled, "RUN! RUN FOR YOUR LIFE!" I know it is not a big deal- they didn't say anything derogatory to me- but it was still annoying! Whoever was yelling at me doesn't even know me. And they wait until I am half a block away to do it. It seriously reminded me of being in middle school or high school and getting made fun of.

At that point I made the decision. On my way out of the neighborhood, I would confront the kids at the bus stop! Whoever was yelling at me needed to be called out on their idiot behavior. I rehearsed what I was going to say in my head, and then ran straight up to the group of 5-6 kids at the bus stop.

"So which one of you shouts at me every time I run by?" I asked nonchalantly.

No one spoke, then finally a girl took her headphones out of her ears and said, "What?"

"Which one of you shouts at me every time I run by?" I repeated.

"Matthew," the girl said, and pointed straight at the only boy standing there. I chuckled in my head. Teenagers are just like the six year olds at the school I teach at... they will tattle on each other in a heartbeat.

Matthew stood there awkwardly with his hands in his pockets. He must have been 15-16 years old, tall-ish, slightly overweight, in a black zip up hoodie and glasses. His hair was shaggy and blond.

"Why are you shouting at me?" I asked him. There was no anger in my voice. It was just a straightforward question.

"It's really immature," I told him.

"Okay, well have a great day guys, I'll see you in the mornings!" I said cheerfully, and ran off down the street. Boy was I pleased with myself, and must have run a 7 minute mile on the way home. (I don't know for sure though, as I was so excited after my encounter that I forgot to start my Garmin again.) The only thing I regret is not walking over to Matthew, shaking his hand, and introducing myself. But I hope I got my point across- he was yelling at a person.

Again, I will state that I know the dude wasn't yelling anything derogatory at me, but this was the third time! How long was I just going to ignore him? And I know FOR SURE that if I had been a MAN, he would not have yelled anything at me. The douchey teenager had the balls to yell stupid stuff at a WOMAN, but I am pretty sure he would not have yelled if I were a man.

So that's my story! And seriously... I cannot wait to say hello to Matthew every morning when I pass him at the bus stop from now on!

Has anyone ever yelled anything at you while you were running?
Posted by Meg Go Run at 5:30 AM