I have been meaning to share more about my adventure seeing Joe Biden speak. It was almost two weeks ago now. Crazy! Here is a recap of the experience. I know I will always remember it!

On the Sunday before election day, me, my mom, and my SIL Debby went to see Joe Biden speak on behalf of Hillary and Katie McGinty. Attending this rally was a last minute decision. You only live once, right? I was excited! I really like Joe Biden. When I think about how he spent his entire life in public service, it really motivates me to be a better citizen.

We met at Debby's house and drove over to the rally in Harrisburg together. She brought her 4 month old son Clark. Before we left, my brother told us that we better have Joe Biden kiss the baby. Sure, Tyler!

The street in front of the Lincoln School was closed off and there were police officers and secret service everywhere. We ended up parking about two blocks away and got in line around 11:30. It was chilly but the line wasn't too long. The doors were scheduled to open at 12:15, so I figured we wouldn't be standing in line too long. 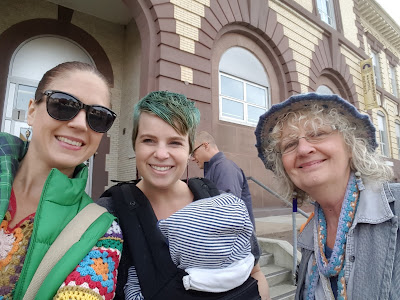 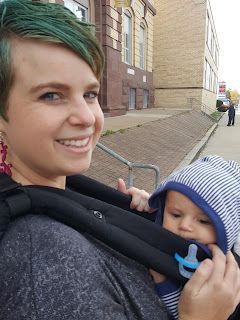 After a few minutes, someone associated with the event yelled, "Are there any teachers here?" "I'm a teacher!" I yelled back. The woman invited me, my family, and our new friend Andrew (we met him in line) to a special line for VIP seats. The VIP seats were for members of NEA (my teacher's union) and Moms Demand Action (a group advocating common sense gun legislation). It was a nice perk! 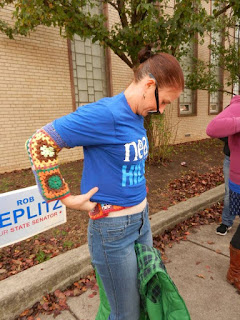 Putting on the NEA shirt they gave me. 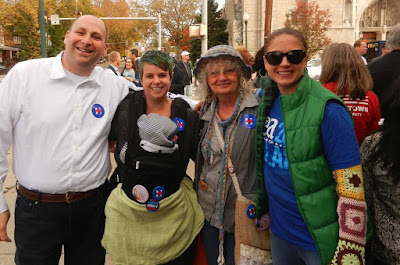 My family and our new friend, Andrew!


Unfortunately the doors did not open at 12:15. We waited... forever. My lower back started to hurt so bad and I was freezing. Finally, around 1:30, we went through the metal detectors and were in the building. I couldn't wait to sit down! 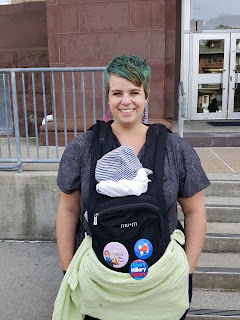 Debby carrying Clark... Her back didn't hurt!
I'm a wuss!

It was warm inside, but unfortunately the rally was being held in a gymnasium with NO SEATING! We had to keep standing! I was prepared to tough it out, but I'm not going to lie, it was rough. By the end of the day, my back hurt more than it ever hurt in my entire life. I did a fair amount of complaining.

We did NOT complain about getting to stand in the VIP area which was really close to the stage! 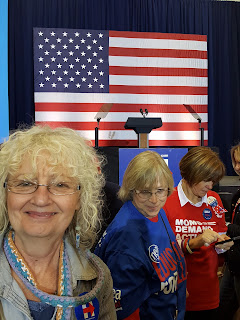 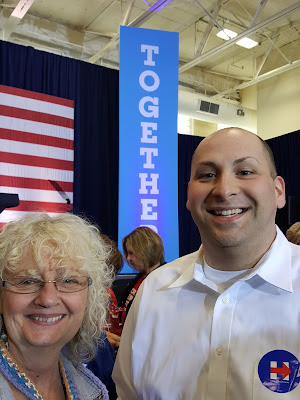 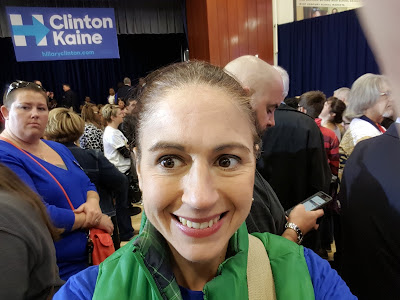 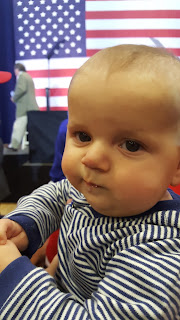 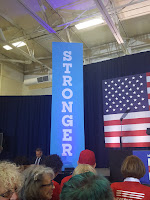 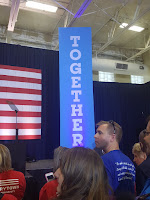 Biden was supposed to speak at 2:00 but he was very late showing up. We stood there waiting until about 4:00! A few people spoke before that, but then there was just a lot of waiting. We knew when he arrived because they brought out the Vice President's seal and put it on the podium. Apparently that travels with the VP, so if the seal was there, Biden was there!

Katie McGinty, who was running for senate, spoke first. She had a very energetic speech. Unfortunately, she did not end up winning on Tuesday. Pat Toomey is still in the senate, which means I get to keep writing him letters and leaving him voice mails about the importance of common sense gun legislation! 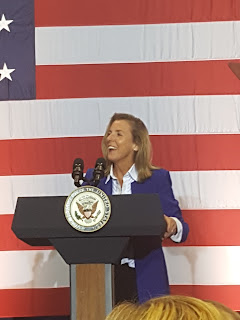 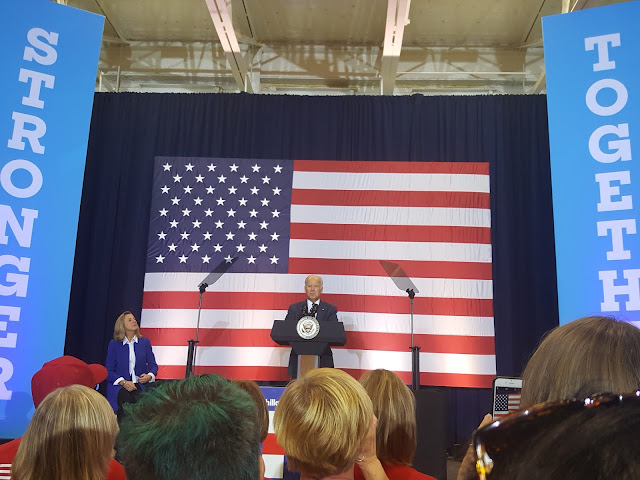 I always love listening to Biden speak. He is earnest, down to earth, and just talks to you straight. He talked about traveling around the world and meeting hundreds of leaders from other nations. They all ask what is the secret that makes America so great and special. His answer: "Possibilities." Here are to excerpts from his speech:


Biden also spoke about how climate change is a national security issue as well as the need for renewable energy. He said that in 10 years, we would have renewable energy in every house in America.

Obviously two weeks later we all know that is probably not going to happen as renewable energy is not a priority for our president elect. Hell he doesn't even "believe" in climate change. I didn't know it was something you had to "believe" in. It's not Santa Claus... Okay I will stop now, I'm getting pissed off! 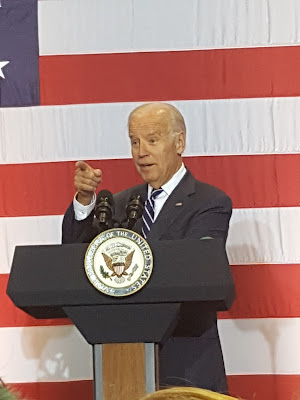 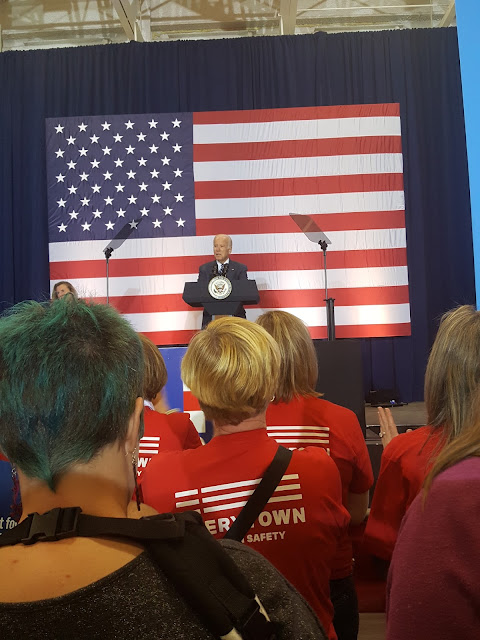 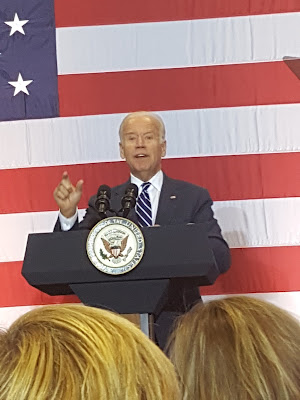 I never got to see a president or VP in person, so this felt like a once in a lifetime experience! Besides Biden, I'm not sure there are many other people I would stand 6 hours to see speak... Actually, here is my list of people I would wait 6 hours to see... IN ORDER.

That's it! I'm totally serious! I can't think of anyone else I would go through all that pain to see!

After he spoke, Biden walked in front of the crowd and took selfies and shook hands with the people lucky enough to be in the front. 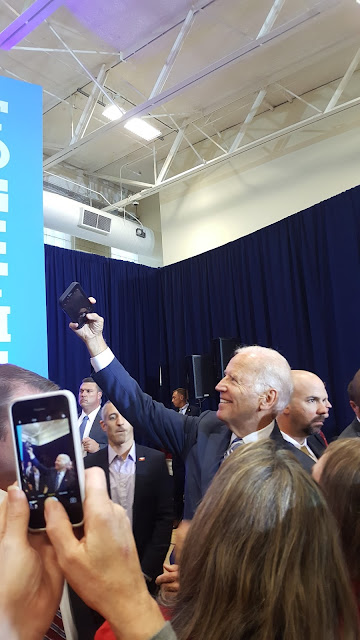 I TOOK THIS PICTURE OF BIDEN AND BABY CLARK!!!! 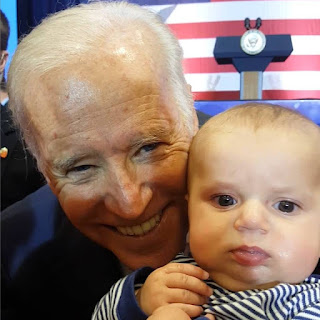 Oh, here is the video of Biden kissing Clark!!!!!

What a freaking day! We were riding high after that! And then we saw Josh Shapiro after the rally and got our picture with him! He was elected Attorney General of PA. 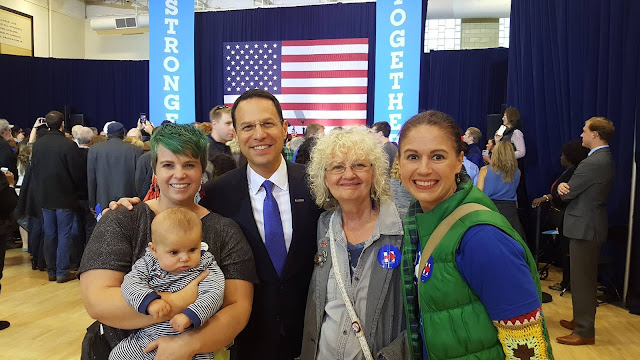 We literally floated down the street after the rally. We were so high! Oh, one thing I thought was interesting... I envisioned a lot of chanting/yelling at the rally. There was not much of that at all! The democrats in the room that day were actually listening intently to all of the speakers and were not super vocal.

On our way back to the car, we passed a lot of secret service and police officers. I thanked them as we walked by. Secret service simply nodded, but the state police were able to smile and talk to us. I am sure they were working overtime to ensure the safety of the VP, and we wanted to let them know we appreciated them!

Obviously it is quite bittersweet to look back on this rally as the election did NOT go the way we all had hoped. But I still wanted to write it up so I had documentation of my experience, and of course I wanted to share it with you all.

Have you ever gone to a political rally?

Do you thank police officers?

Who would you stand 6 hours to see speak?