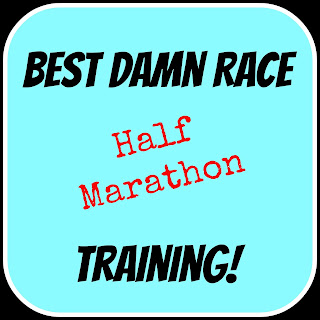 On Friday morning, I was scheduled to do speed work. I really did not feel like getting out of bed! Why are my rest days always scheduled on weekends when it is gorgeous outside, and my speed work is scheduled for dark and early when I don't want to get out of bed!? (That's a rhetorical question, you don't have to answer it!)

But get out of bed a did, because it had been two weeks since I had really pushed myself in the area of speed, so I was due to run some paces that has a “6” in the beginning of them.

I didn't decide what I was actually going to do until three quarters of the way into my warm up mile. I would do 800s. I thought about Yasso 800s, but that would require me having to know exactly how long it took me to run each interval. That sounded like it was going to be a pain in the butt, so I just sprinted an 800 and then recovered for the same distance. For my first two 800s, the recovery period seemed too long, but by the third, I was happy for the 4(ish) minutes of easy running in between each sprint!

I don't really look down out my Garmin during speed work since it is so dark out. Of course I have to know when each 800 begins and ends, but as far as pace is concerned, I'll glance down once or twice per workout just to see what's going on! It appeared that I was running the 800s around my 5k pace (6:15-6:45). I was out of breath. My chest was hot. I felt pukey. It was basically a typical speed workout. Nothing notable. I just got 'er done.

Maybe I will try real Yasso 800s someday! From what I understand, you are only supposed to recover for the amount of time it takes you to run the 800? That sounds like torture, but I am sure it's a great workout!

I only have 2-3 more speed sessions before my half marathon, and one of them is going to be a RACE! I know I am really dangling the carrot in front of you dropping that bomb on you at the end of this blog post, but don't worry, I am posting about the races (yes I said RACES!!!!) in a couple days...