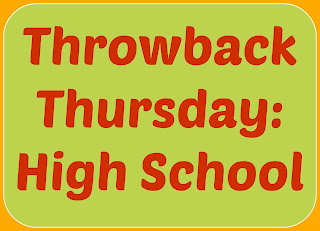 I am pretty sure I wrote about high school before, but I have been thinking about those years a lot lately. Sadly, a classmate of mine passed away unexpectantly a few weeks ago. It was quite shocking to hear of my classmate's passing, and I know it really hit a lot of my high school friends pretty hard.


Naturally, this sad occasion had me reflecting on a lot of memories from high school. I even pulled out my senior yearbook and combed through it one evening. I am not sure I even looked at the thing since graduation. Boy was I glad to have that yearbook because looking through it and reading messages from my high school classmates stirred up some memories I never would have been able to unearth on my own!

I graduated in June, 2000. I wasn't “cool”, but I was popular in the sense that I had a lot of friends. Unfortunately, I was often made to feel like I wasn't cool enough to join my friends in certain activities. My friends were never outright mean to be, but I did feel excluded sometimes. I am sure I am not innocent and did things to make other people feel bad. It's just part of high school! I'm over it.

The interesting thing was that as I was reading messages that people signed in my yearbook, most of them mentioned something along the lines of, “You are never afraid to be yourself and don't care what other people think of you.” Well, I actually did care what other people thought of me, but not enough to try to act like something I was not. I was in band, chorus, and all the musicals. I dressed weird. I said silly things. Another thing people signed in my yearbook was that I was the only person they could be themselves around. I guess I put out the vibe that if I could be my weird and strange self, they could definitely let their freak flag fly around me and I wouldn't think it was odd!

My graduating class was quite small- only 51 students! Looking at our senior pictures, I was shocked at how young we all looked and how out of style our clothes and hair were! It's funny, you never think that your look would ever be out of style... until it is!

I guess I have to show the obligatory yearbook pictures now! 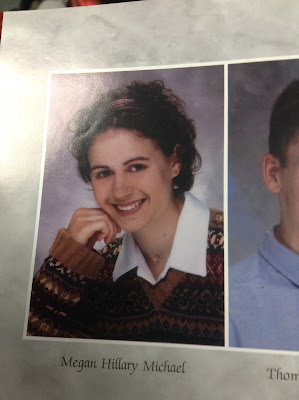 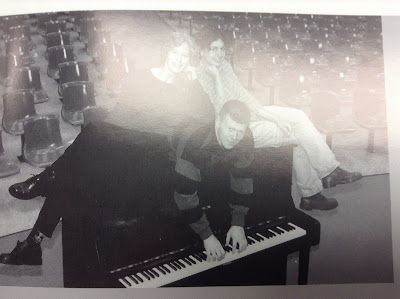 My friends Ashley and Jared.
We were great friends and were in a bunch of musicals together. 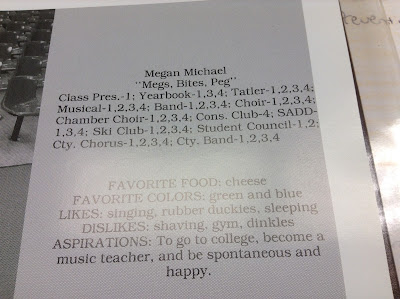 We all got to write a little blurb about ourselves.
I forgot I was class president my freshman year! (I had zero responsibilities.)
FYI: Dinkles were our marching band shoes.
I think I nailed my aspirations, except for the spontaneous part. I am NOT spontaneous! 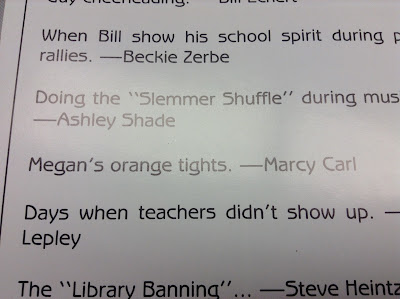 We were asked what our favorite memory from high school was. Lots of people enjoyed my orange tights. I had a pair of BRIGHT NEON orange tights I would wear about once of year, even after they got a big hole in them. 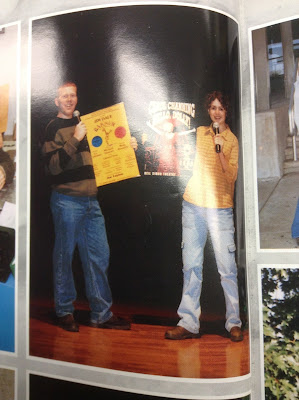 My friend Jared and I were voted "Most Likely To Star On Broadway".
Neither of us are on Broadway, but we are both music teachers, which is probably most Broadway stars' back up plans...
Hey, we are TOTALLY ROCKING OUR BACK UP PLANS! 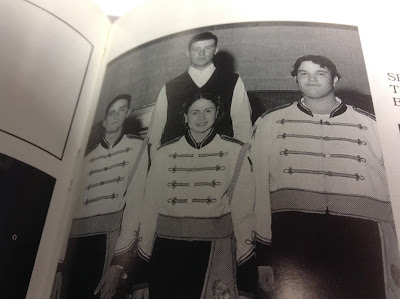 The senior members of marching band. I'm not sure what Bryan (top) and Chris (right) are up to, but Justin (left) is a member of the popular Christian band Sidewalk Prophets! 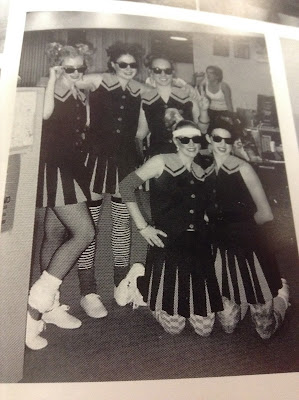 Ashley, me, Sherrie, a girl who's name I forget, and Mandy.
Our school held a lip sync contest our senior year. Ashley and I choreographed a dance to "Hey Mickey" and we won first place! $100 split 5 ways was a BIG DEAL when you were 17!

When was the last time you looked at your senior yearbook?
What were you like in high school?
Were you in marching band?
Posted by Meg Go Run at 5:30 AM