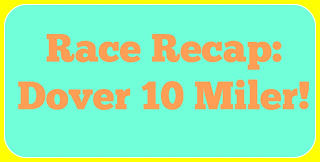 I actually hate writing race recaps because I never know how to organize all of my thoughts and feelings! Sorry if this post is a little disjointed. I tried to make it flow as best as I could!

On Sunday afternoon, my dad and I ran the Dover 10 Miler. I'm going to cut to the chase. This race was HARD. My dad and I both agreed it was not fun. Boy were we glad when it was over! My dad did awesome- he finished 4 minutes faster than his pie in the sky goal. I finished 4 minutes slower than my pie in the sky goal. That brought us finishing about 30 seconds apart from each other. Like father, like daughter! My dad is an amazing athlete and is the epitome of someone who has spent their life being fit and active. I hope I get to be a lifelong athlete like he is.

Race morning consisted of sleeping until 10:15, eating shredded wheat, drinking iced coffee, going to the bathroom 50 times, and feeling apprehensive. One of my goals with racing more is the hope that I stop getting so nervous. As Lisa @ Running Out of Wine put it, it will be good for me to "get more comfortable feeling uncomfortable." That's exactly it! Also, there is a lot to be learned from each race, and it can only make me a better runner!

The race was about a half hour from my house, so my parents picked up Paul and I and we rode there together. We got there with plenty of time to register and get situated. 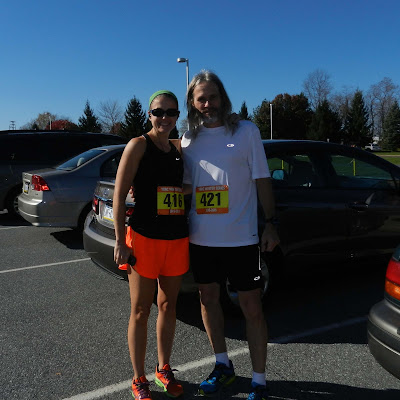 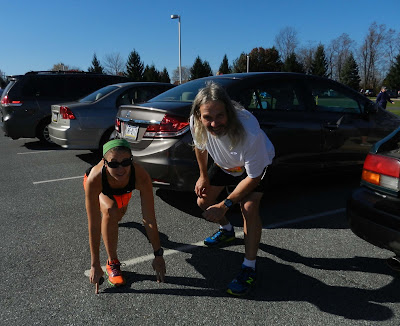 I lined up near the front of the runners. A bunch of high school boys got in front of me and holy crap did they stink. I wondered why they stank already. Oh well, we were all going to stink in about 20 minutes, right?

My legs felt great for the first mile or two. I wanted to go faster, but my race plan was to stick between a 7:10-7:20 pace. I could have easily run sub 7s in the beginning, but obviously, that would not set myself up for a good end of the race!

The great feeling I had the first mile or two waned, and it didn't take long for me to realize the goal I set for myself was just not attainable. It was much more hilly than I thought it would be. (Maybe I need to get better at reading elevation charts or something because I swear it did not appear so hilly when I checked online!) I saw a friend of mine before the race and he warned me about the course. Boy, was he right!

I started listening to my pod cast pretty much right away, but I barely paid any attention to it. I tried to. I wanted to zone out. But I was worried. There were a lot of hills. I was getting out of breath. My legs felt great- knee and IT Band felt very strong. But I was struggling to breathe. It was quite warm out but that wasn't the problem as my weekend runs have been warm. It was the hills. I was not prepared for the hills.

I didn't take water with me because there was a water stop at mile 3, and then we hit it on the way back at mile 7. The course was on back country roads, and besides the spectators at the start/finish, there was only one spectator on the course! He was shouting some very motivating things, though!

A little before mile 3, I noticed a big, red, fuzzy caterpillar crossing the road. I was careful not to step on him and hoped he would make it to the other side without being crushed by a runner. On the way back, I saw the same caterpillar! He was making his way back across the road! So the little fuzzy guy was in the middle of his own little out and back. Seeing him gave me a little more motivation to get up the hill that seemed to last all of mile seven.

At mile 8.3, a side stitch started to creep up on me. I tried breathing in through my nose and out through my mouth the way my high school gym teacher taught me to do. It didn't work, because about a quarter mile later, it turned into a pain that felt like I was getting stabbed in the side. It was a full blown rip roaring side stitch that caused me to whimper out loud and stop to walk. Walking didn't help! It still hurt REALLY BAD and I was groaning out loud. I seriously though I'd have to walk the last mile and a half. But walking hurt just as bad as running, so after walking for a quarter mile, I tried running again. It still hurt, but it eased up a bit.

Soon the finish was near! All I had wanted to do since about mile 4 was be DONE, and now with this side stitch, I really wanted to be done. With less than a half mile left, my left calf started spazzing out. It didn't hurt but it seemed like it was right about to cramp up. I altered my gait just a little bit to keep it at bay and sprinted across the finish line.

Not what I wanted.

I was on point until the last 4 miles... which were mostly uphill. Then there was the walking due to the side stitch. I really did give it my all, though. I was sucking wind the whole time! There was nothing else I could have done. What can I say other than Dover KICKED MY ASS! During the race I wanted to puke, and there was a point where I thought I just wouldn't be able to catch my breath. 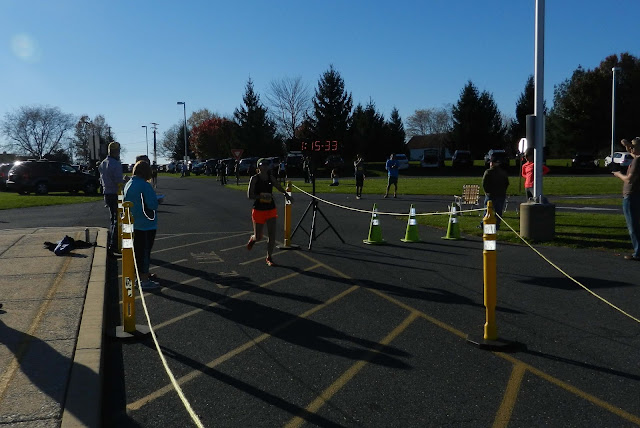 My dad crossed the finish line just about 30 seconds after me! He did SO WELL!!! 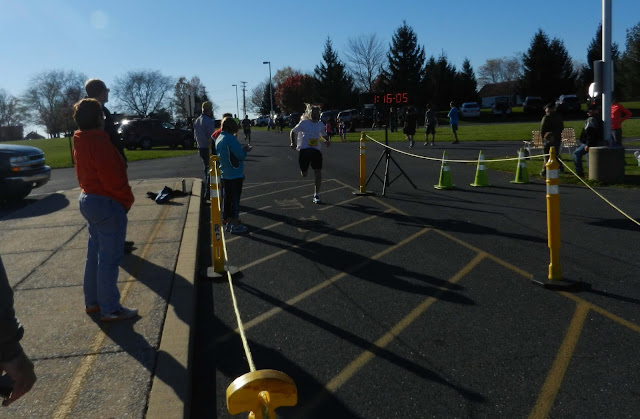 It was fun to commiserate about the race course together. I asked him if it was just me, or were we running against the wind on the way out and the way back. Dad explained that it was a crosswind, but that it's just as bad. He is a cyclist, so he explained that in biking, any wind other than a tailwind is no good because crosswinds feel just like head winds. 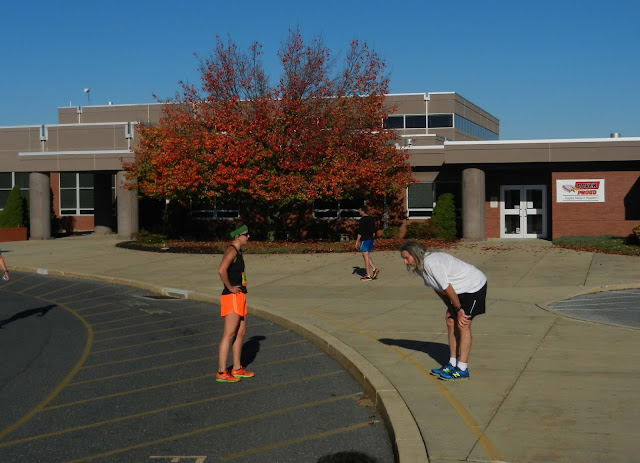 Even though I didn't do as well as I wanted, it was a better training run than anything I would have done around my FLAT neighborhood. These hills will only make me a better runner at my half marathon in December. Sure, I wished it were easier. But I needed a hard run. This was good for me.

After pushing my body to the brink, I was very nice to it for the rest of the day. I did 2 stretching sessions and a foam rolling session. I wore my compression socks. I laid on the couch. My IT band was a little sore but nothing too bad. My toes were really crampy so I stretched them. Wow, that's the first time my toes were spazzing out after a race! I also ate... A LOT!! I ate like I ran a marathon... and didn't feel a lick of guilt about it. (After years of disordered eating, eating like this is a VICTORY.) The second toenails on both of my feet also hurt. (Update as of Monday afternoon: quads are sore today. Also, my traps! What the hell, I must have run with my shoulders hunched the entire time!) 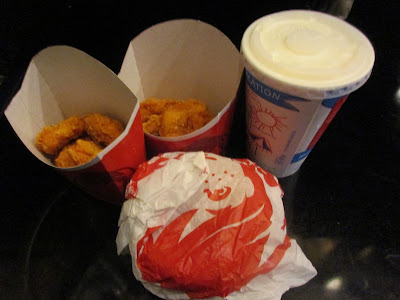 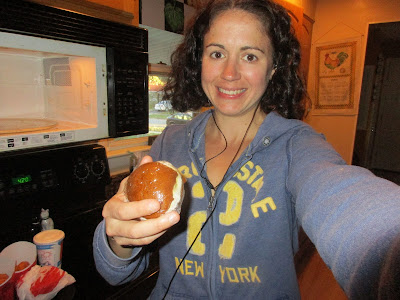 We got whoopie pies instead of medals!
It appears I got some sun. It was pretty sunny out for the second week of November!

Oh, fun fact! Remember how I said I was worried about getting my period the day of the race? Well I got it 36 minutes before the race started. The good news was I wasn't pregnant. The bad news was I didn't have a tampon and the tampon machine ate my dime. More bad news: Orange shorts = ruined.

Have you ever had a KILLER side stitch in a race?
Posted by Meg Go Run at 5:30 AM