Let me start off by saying running The Incline was the hardest physical thing I have ever done. Paul says, "Harder than PR'ing in the mile?" Answer: Yes. Because the mile only really sucked for maybe the last 2 minutes. The Incline sucked for.... ummm... anything after .33 miles!

Not sure what the incline is? Never fear! I will copy paste some info for you from Wikipedia!


"The Manitou Springs Incline, also known as the Manitou Incline or simply the Incline, is a popular hiking trail rising above Manitou Springs, Colorado, near Colorado Springs. The trail is the remains of a former 3 ft narrow gauge funicular railway whose tracks washed out during a rock slide in 1990. The Incline is famous for its sweeping views and steep grade, as steep as 68% in places, making it a fitness challenge for locals in the Colorado Springs area. The incline gains over 2,000 feet of elevation in less than one mile."

I was extremely excited to do this run. I left my hotel in Manitou Springs around 7:30 and headed toward The Incline. I wasn't quite sure where I was going or where to park, but I finally figured it out and ended up parking about a mile away. (Parking is very limited. However, it did provide me with a good 1 mile warm up and 1 mile cool down.) After I put money in the meter, I realized I FORGOT MY HYDRATION PACK!!! All I had with me was a 12 oz bottle of water! That was never going to get me to the top of The Incline and back down! Luckily, for a mere $3.59, I could buy a huge bottle of water at The Incline Base Camp. Sure, I would have to carry the water in my hands, but that was better than dying of thirst! (I didn't have time to drive back to the hotel because we had Cog Railway tickets for noon, so I was on a time crunch!!!)

The incline is NOT for the faint of heart. Yet there were all different kinds of people on the trail- kids, teenagers, old, young, dogs, dads carrying babies...I started out at my normal "fast" walking pace, but it was definitely not something I would keep up for the long haul. My goal was to make it to 1/4 mile before taking a break and a drink of water, but I only made it to .2.  I took another break at .33 miles.... and this was probably the least steep part of The Incline! 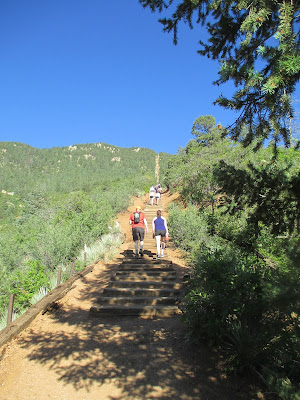 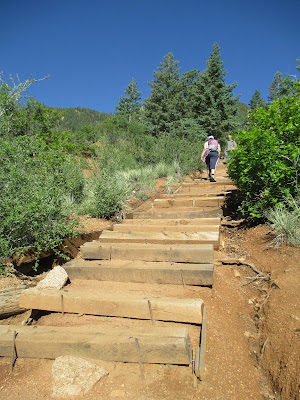 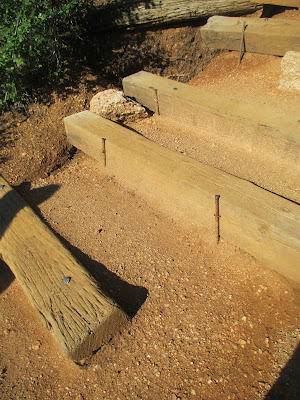 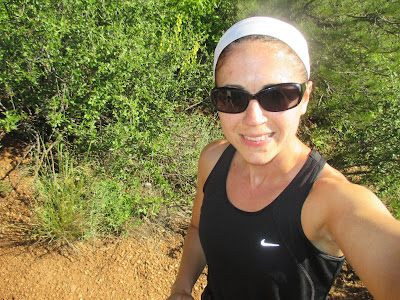 
At the 1/2 mile mark (oh boy did it wake me a lot of energy to get there!!!!) I took a pretty long break to snap some pics and take a lot of drinks. I simply could not breathe! It was a combination of the altitude and the fact that it is freaking hard to walk up stair steps for a 1/2 mile!) I wondered if people actually RAN up this thing... I didn't understand how it would be possible to run. No one on The Incline was running the entire time I was on it.

I had to keep turning around to look at the view- it was AMAZING. 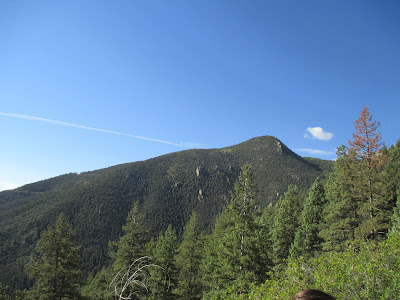 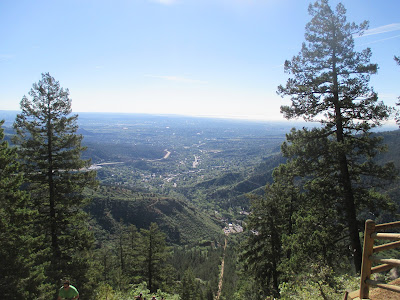 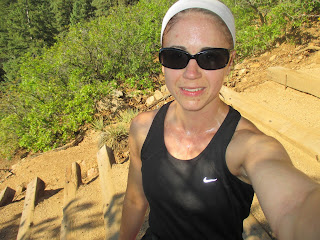 Starting to really feel it...


From the 1/2 mile point, I took a break every .05 miles. I know that sounds like NOTHING, but it was all I could do to make it .05 miles without another break. It was starting to get REALLY steep, and the freaking false summit (even though I was aware of it) was messing with my mind!)

While the beginning part was not super steep, at this part, there were areas I literally had to CLIMB up to the next step. I was a little dizzy... MY KNEE FELT AWESOME THOUGH! I think it was because I wore my brace, like my doctor recommended.

For the last .15 miles, I trucked along without stopping. I met a girl who had just done The Incline last week and she was really motivating! We talked for maybe 3 minutes- in between huffs and puffs.

I wanted to puke due to the elevation and due to the BO!!!! THE GUYS STANK. I think some of the guys on the incline that day decided "To hell with deodorant!" So I got to smell the lovely smell of onion subs the whole way up. BLECH! (Because I am sure I smelled like sunshine and rainbows!) 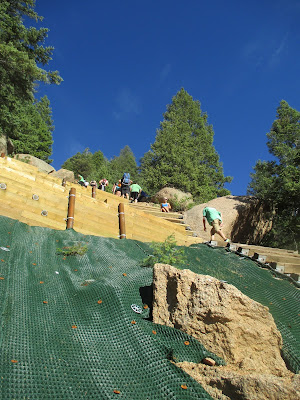 LOOK HOW STEEP IT GOT!!!


When I finally made it to the top, I felt so accomplished. I DID IT! Most people took a break at the top. I snapped some pictures, soaked in the experience, and then headed down the Barr Trail. 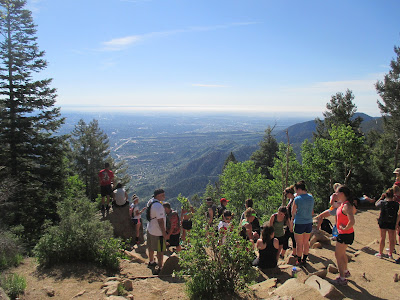 Crowds at the top 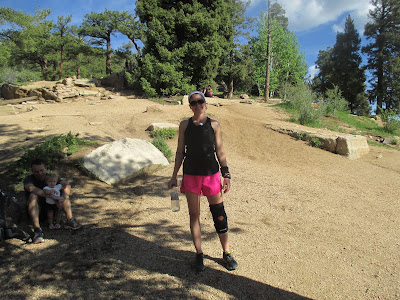 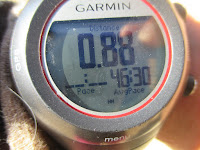 If you continue up the Barr Trail, it takes you to the summit of Pikes Peak. It is actually the route the Pikes Peak Marathon/Half Marathon takes. But if you take the Barr Trail down, it is a series of switchbacks that takes you back down the mountain. It would be too dangerous to go down the incline due to the steep grade.

The Barr trail was BEAUTIFUL. There were so many times I would round a corner, get a new view, and just go, "WOW!" right out loud! The Barr Trail was even cooler than The Incline! 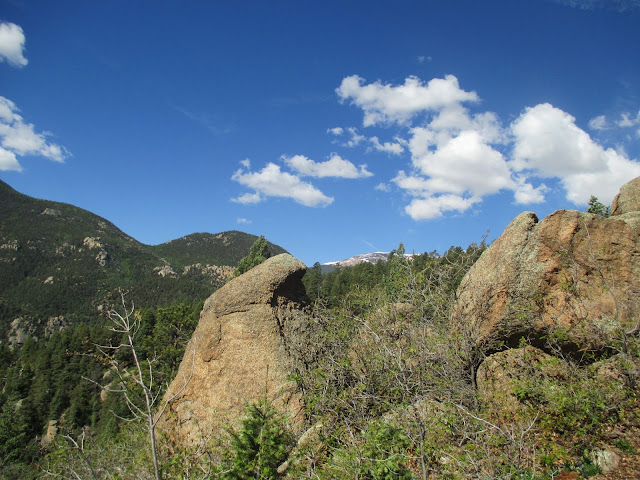 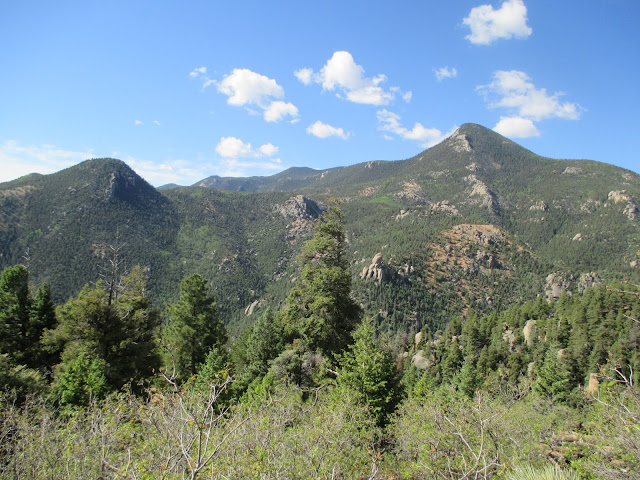 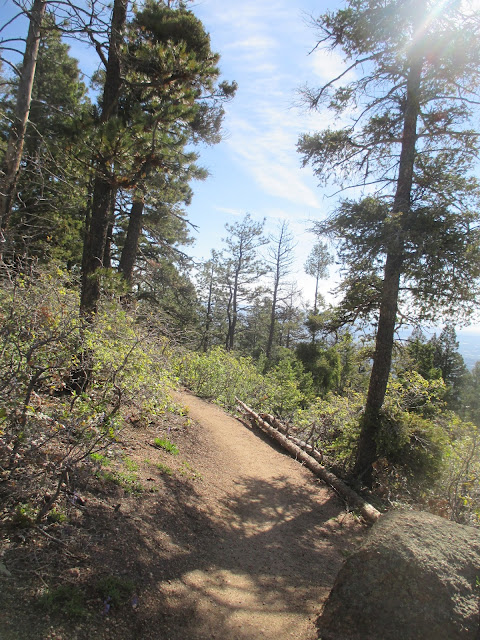 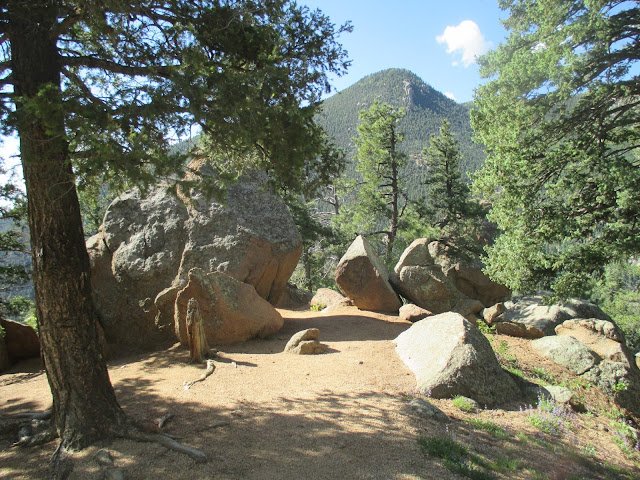 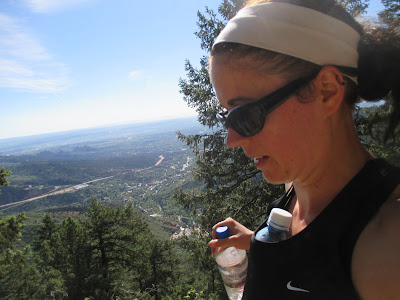 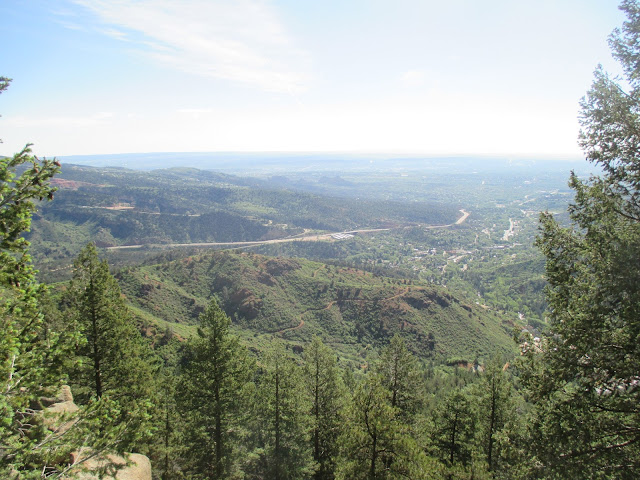 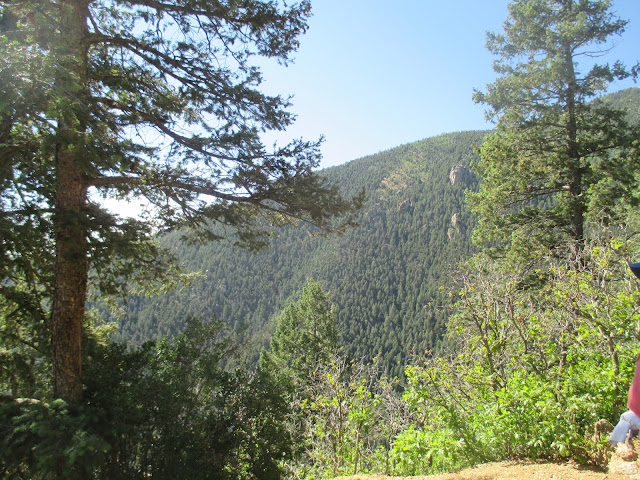 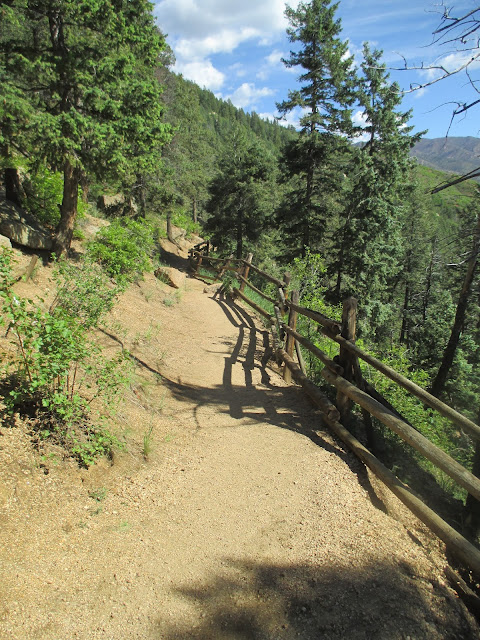 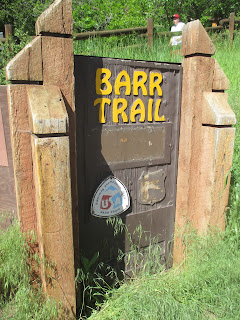 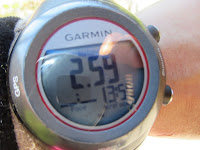 I really felt like I was running faster than a 13 minute mile. Hell, I was going DOWNHILL.
I guess I wasn't...

Since I wore my knee brace and my knee felt STRONG the entire time and the rest of the day. My hip was tight after, even though I stretched and used my rogue ball. Paul rubbed my back later that night, so that felt good!

The grand total (according to my Garmin) was .88 up The Incline and 2.59 down the Barr Trail.... plus 2 miles total for warming up and cooling down. Definitely the most taxing thing my body has done in quite awhile!

I am so glad I did this. It was wonderful and it sucked all at the same time. I saw such beauty! And I felt so accomplished at the end. If you ever make the trip to the Denver area, I highly recommend doing The Incline!

Have you ever run The Incline?
What is the hardest physical thing you have ever done?
Where is the most beautiful place you have ever run?
Posted by Meg Go Run at 5:30 AM