Why I Would Suck At Survivor

As you may know, I am a HUGE fan of the TV show Survivor. It is one of my favorite shows to watch with Paul. Did you know Paul is hilarious? We just laugh and joke through every episode and find the same types of things funny.

Not only are we going through each old season one by one (there are 30 seasons total so it takes time), but we are also watching the current season: Survivor World's Apart.

Jeff Probst hyped this season up to be one of the best seasons of Survivor ever, but I am not seeing it. Sure, there are hilarious parts, but there are also a ton of unlikable people. (My personal least favorite picks: Jenn, Shirin, and Will... UGH!)

Of the older seasons, we tend to really like the ones that most people don't like. Some of our favorites include: Thailand, Fiji, Panama, and Vanuatu.

Well, in honor of tonight's Survivor Finale (GO Carolyn!), I thought I would give you the top reasons why I would suck at Survivor. Watching it so often makes me wonder what it would like to be in the show. Part of me thinks it would be a ton of fun, but the other part of me knows that I would maybe last 2 days at the most out there! 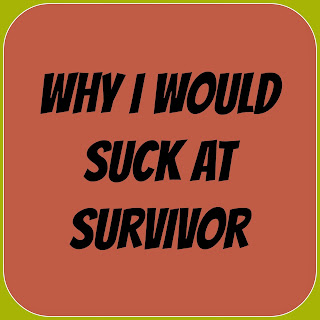 AKA: I hate people. I lived alone in college. I had a roommate for a couple months after college, but I hated it. I am just not a "live with someone else" type of person. Paul and I are pretty independent, so even though we are obviously married and live together, we have a lot of independence from each other as well. I couldn't imagine living with 7-10 other strangers on a beach and actually have to be social 24/7.

Want to know what I'm thinking? Just look at my face. I cannot hide my feelings and emotions! Paul and my mom can vouch for this one! (And probably my students!)

I am a straight up super bitch when I am hungry. And being that I am a pig athlete, I am used to packing A LOT of food in. It is not uncommon to go several days without food and water on Survivor (depending on when you get fire). I would either pass out from hunger or go bat shit crazy and get kicked off the show.

I get cold very easily and I just hate it so bad! Nights on Survivor are cold and wet. Whenever I listen to past Survivors talk about the show, they say the hardest thing is being cold and wet at night. It's the one thing that is so hard and just does not translate well onto the screen. It's sort of something you have to experience yourself to understand. NO THANK YOU!

I would definitely go down in history as the first Survivor contestant who quit the show because she missed her cats.

OH MY GOSH, I FORGOT MAYBE THE MOST IMPORTANT REASON I WOULD SUCK AT SURVIVOR....

Do you watch Survivor? Do you think you would be good at it?
What reality show would you go on if you could? Big Brother- as long as I could bring Christmas, Jelly, and Paul with me into the house!
Posted by Meg Go Run at 5:30 AM