I have been to the chiro several times since I gave you my first update. Allow me to clue you in on what's going on since then...

At my first appointment on Wednesday, Dr. Olivetti didn't seem too concerned with what was going on.

At my second appointment on Friday, he adjusted me and I told him "It kind of hurt". This concerned him. He said I may have a disc problem and that is why my hip/glute hurts.

WTF?? I do not have a disc problem. He told me not to run or jump or do anything over the weekend until he saw me on Monday.

Yeah right. Over the wekeend I did a walk/run, push ups, pull ups... I knew I didn't have a disc problem. Call me stupid if you want, but the only reason he thought I may have a disc problem was due to me saying the adjustment hurt. (I don't know why he adjusted me anyway. I will not be letting him do that again.) Are adjustments actually supposed to feel good? 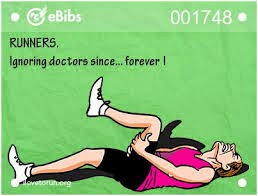 At my third appointment, he asked how I was feeling. I didn't tell him I ran, but I did tell him the truth that my hip hurts a little bit when I bend to the side in my "I'm a little teacup," pose. He worked on me for awhile and was glad to hear things were getting better rather than worse. I said he doesn't think it's a disc problem, but that the pain is originating in the tensor fasciae latae. That's good! I'd rather have some tightness in my TFL than a freaking BACK problem.

I have lots of wonderful runs coming up. I still may be running a trail half at the end of May. And I want to run while we are on vacation in June. So I am going to really baby my body and stick with lots of walking and an occasional walk/run for now. I would hate to be injured while we are on vaycay and miss running in Colorado, Santa Fe, and San Diego!

Okay, time to go learn all I can about the TFL!

Do you think adjustments feel good?
Ever experience pain in your TFL?
Posted by Meg Go Run at 5:30 AM