**Believe it or not, I used to be able to run for longer than 10 minutes. (That's right my friends, I am up to 10 minutes now!) I used to run miles and miles on the trail. I still love the trail. I can't wait to get back on it! At this point my knee is going to be better just in time for the warm weather... and the snakes! (DAMNIT!) I'd like to tell you about a time, long ago in 2010, when I ran a 50 Mile Ultra Marathon! Get a cup 'o coffee (or scotch) and sit back. This is a long one. (Or just scroll down and look at pictures.)**

When I first started running, I only ran on the road. After awhile, I would dabble in trail running- mostly because my friends ran on trail a lot and I didn't want to run alone on the weekends. At first, I didn't like the trail. I felt like I had to concentrate the whole time to be sure I didn't fall or step on a snake or something equally as frightening. I don't know when I changed my mind, but eventually I loved trail running. I still do.

In January, 2010, I ran my first ultra marathon- a 50k. It was the longest distance I ever ran in my life. It was one of those Fat-Ass, no frills get togethers called the Phunt 50k in Elkton, MD. The race was in early January. It was freezing and the ground was snow covered, but somehow I managed to finish in six and a half hours(ish). No one was even watching while I crossed the finish line- that is how Fat Ass-y this one was. I grabbed two hot dogs (I was starving!) and drove 2 hours home. It was a great experience! Just a loooong day in the woods.

For some reason, I decided to run a 50 mile ultra after that. A lot of my friends I ran with at the time had run ultras (even 100 milers!), so it didn't seem like such a crazy thing to do. My friend Anne and I decided to sign up for the Bull Run 50 Miler in Clifton, Virginia. We trained together and ran the entire race together. That day was one of the best days of my life. I felt so good the whole race. Part of me doesn't even want to attempt a 50 again because I don't think any race could ever turn out as well as Bull Run did.

Some FAQs about running a 50 Mile Ultra

**Based off my experience only- I am not an expert! I only did it once!**

How do you train for a 50? I know I trained too much. I ran too many miles during the week. I should have rested more on those days. I did things right on the weekends, though. We did a lot of back to back trail runs- 20 miles on a Saturday and 12 miles on a Sunday. Stuff like that. Our longest run was supposed to be 30 miles but I got injured and wasn't able to do that one. More on that in a minute...

Did you experience any injuries during your training? Why yes, I did! Several weeks before the race my achilles suddenly got SUPER tight. I had to rest and go to PT. I even missed some important training runs. Somehow, it got better pretty quickly and everything worked out. I have never had an achilles injury since.

What did you eat during the race? Lots of peanut butter sandwiches. 2 pieces of pizza. Water. Mountain Dew (LOTS!!). Peanut M & Ms and a doughnut. I'm sure I ate other stuff too but I can't remember.

Did you run the whole time or did you walk? We walked up every hill and sometimes we walked while we ate. Otherwise, we ran- slow, but steady. We weren't looking to break any records.

Where do you go to the bathroom? All over the woods! The first 35 miles I was sure to go behind a tree. But by the end of the race I was drinking so much Mountain Dew that I had to go all. the. time. And for some reason, after 9 hours in the woods, you stop caring about peeing behind a tree and don't care who sees your bum. So I sort of stopped being concerned about finding a tree at that point.

What did you carry with you? My hydration pack as well as a little pack around my waist. I am pretty sure I had napkins, aspirin, and salt tabs in that. Oh, and I had my phone, too! I remember texting my friend at one point while we were running through a field.

What did you eat after the race? Immediately after, I had a huge grilled italian sausage, some cupcakes, potato salad and a soda. I think some ginger snaps on the way home, too. When we got home later that night, I ate an entire small pizza from Papa John's... including the butter dipping sauce!

Did you have any injuries or blisters or anything after the race? I had two HUGE blisters on the outside of each big toe. They were as big as marbles. I didn't even know I had them until I took my sneakers off. I popped them in the shower immediately. That hurt like a bitch but there was no other choice- they hurt too bad!

Did you and Anne talk the whole time? Yes. We talked the entire 11.5 hours. I have never had a longer conversation with anyone. I am so lucky to have been able to share this experience with Anne. She is a wonderful person, an amazing runner, and a great friend. I wish you all would get to run with her someday!

And now some pictures of our day!!! 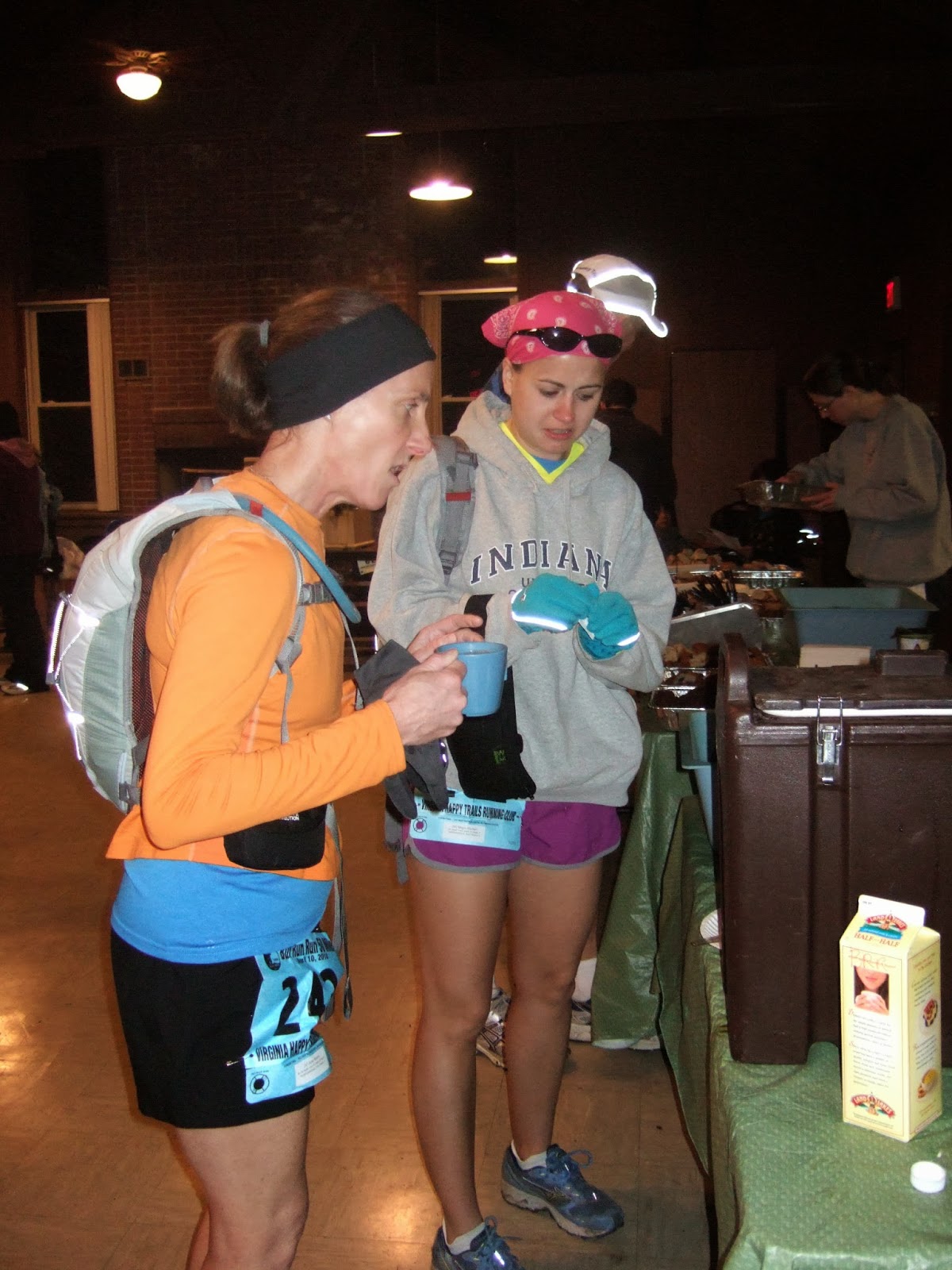 I ate a big bagel on the way to the start. When we got there, we stayed semi warm inside
and loaded up on some pre-race coffee. I used wear a bandanna when I ran. 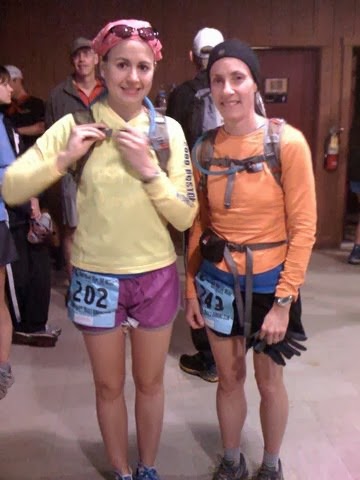 Pre-race pic! Me and Anne. Best trail running partner EVER! 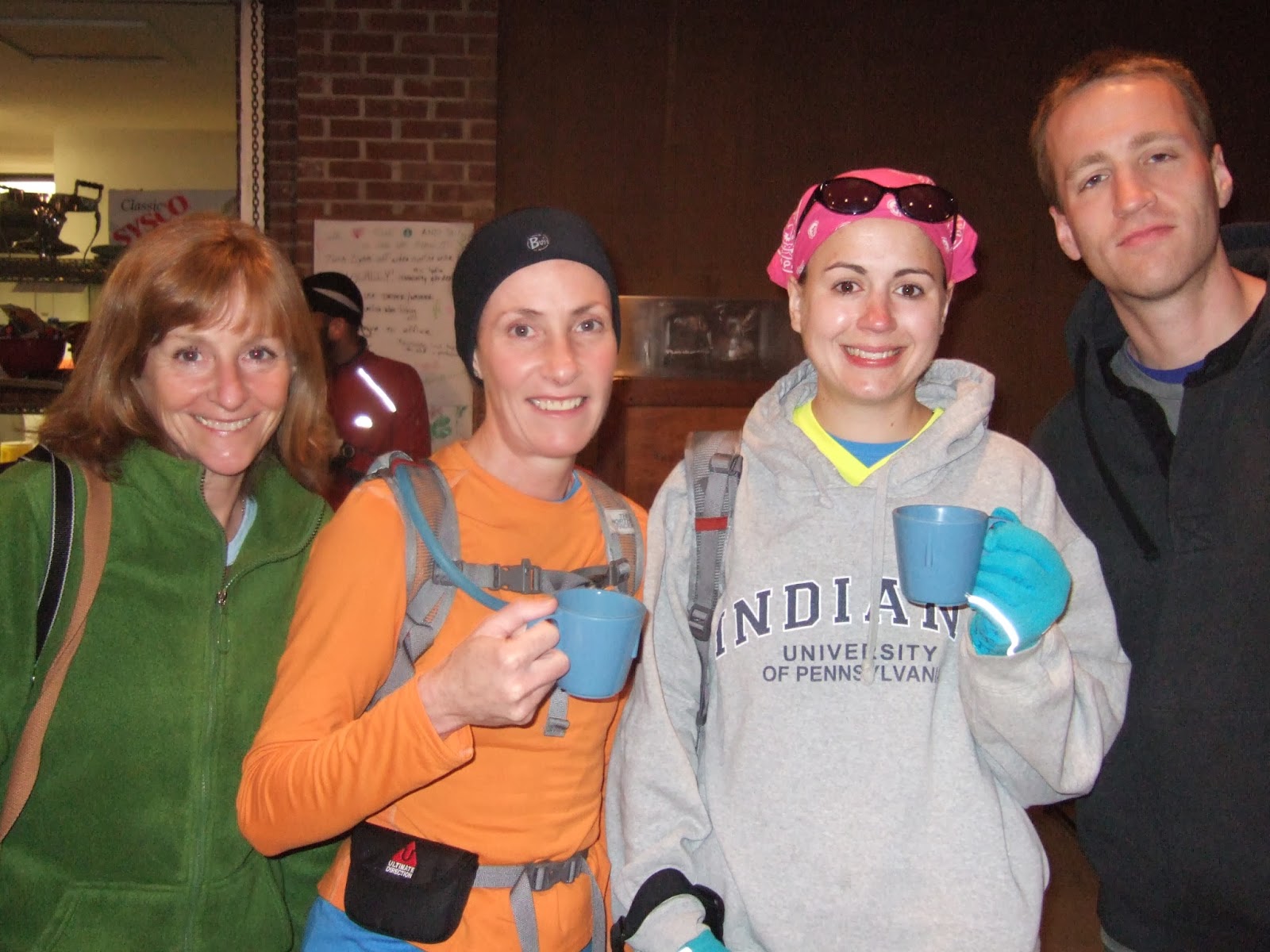 My mother-in-law Deb, Anne, me, and Paul.
Paul looks like a BABY!!!
Deb and Paul crewed for us. They brought a tambourine and a drum so when we
were approaching an aid station, we would hear their music. BEST. CREW. EVER! 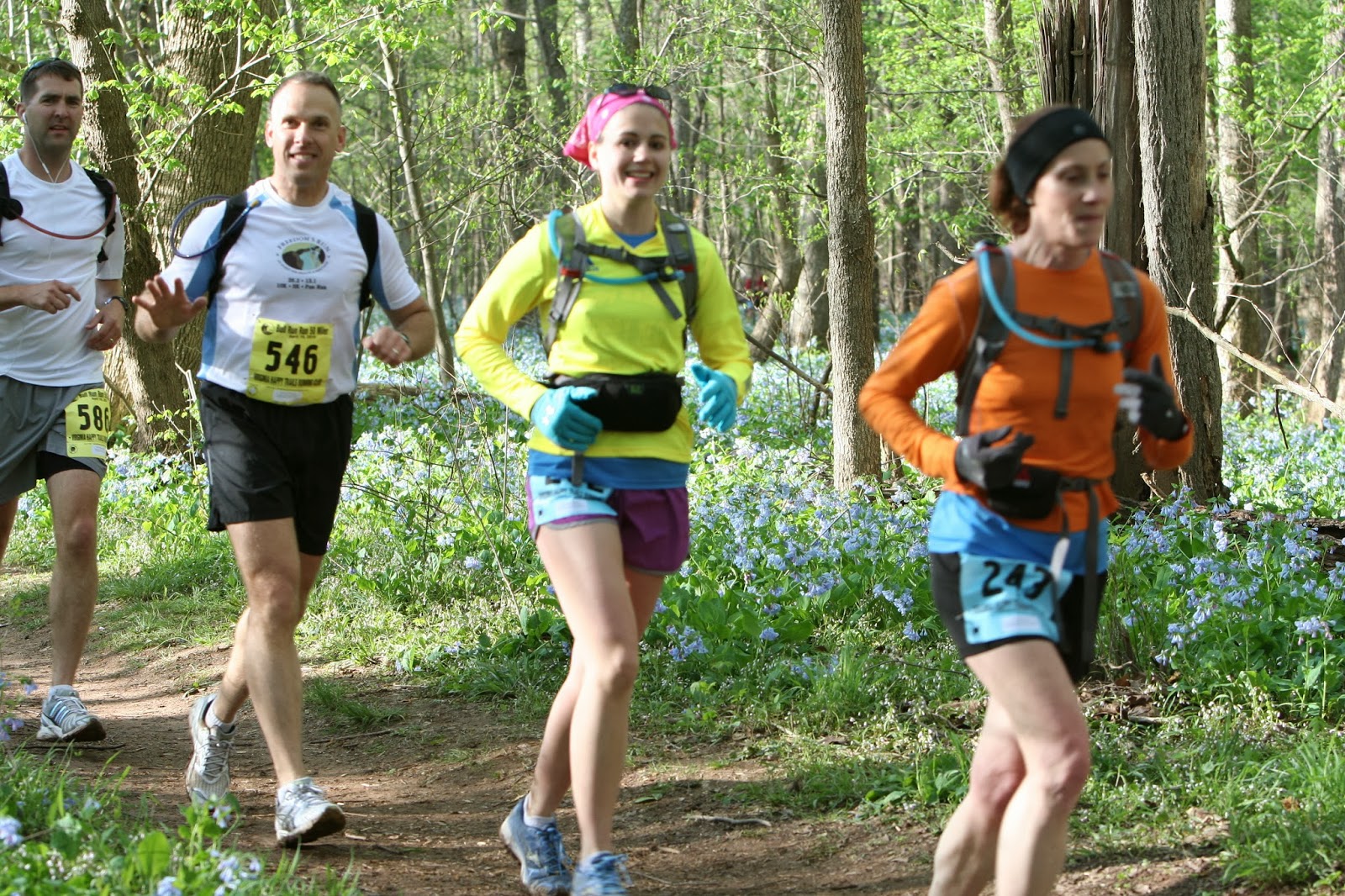 This had to have been early, before Mile 11 since we still had on our long sleeves and gloves.
See the blue bells? The course was gorgeous. 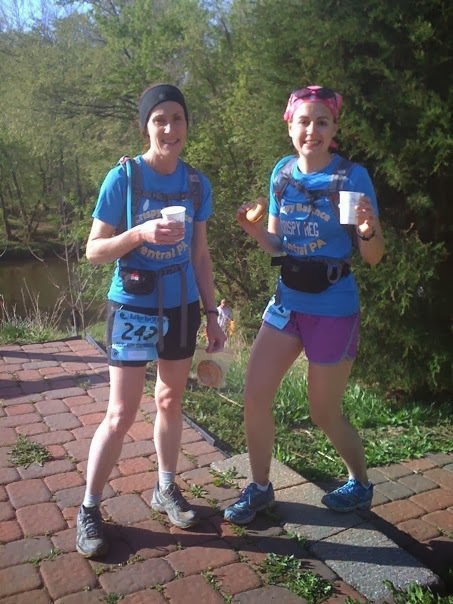 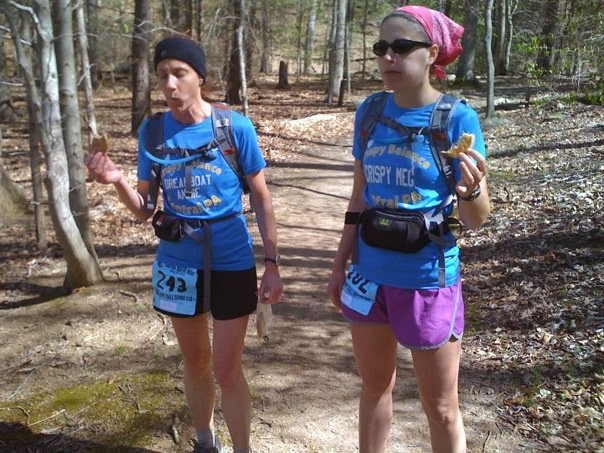 Mile 21.
PB&J fueled us most of the way.
Most of the pictures you will see are of us eating!

Who are these people? Well, they are the volunteers at the Wolf Run Shoals aid station. This aid station is at Mile 25 and you pass it again on the way back as well. These fun volunteers dress up every year, and that year, the theme was The Wizard of Oz. I was too delirious to understand that they were dressed up because I thought the Tin Man was a runner who was wearing one of those suits the people who run Badwater wear. I said to Anne, "Why is that guy in a Badwater suit?" She answered, "Megan, he's the Tin Man!" Augh, it all came together after that! 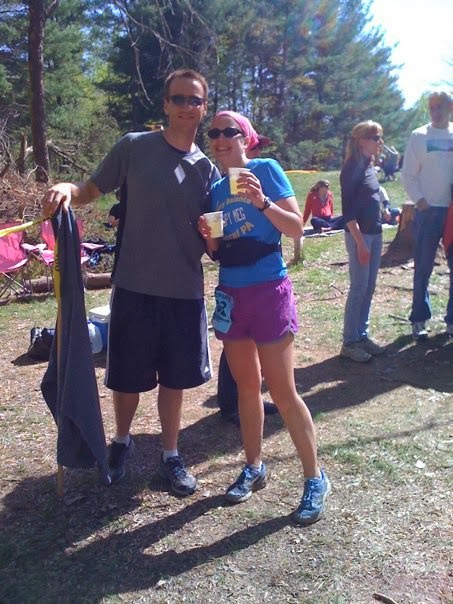 Mile 28. I had just started the Mountain Dew. Once I started, I didn't stop! 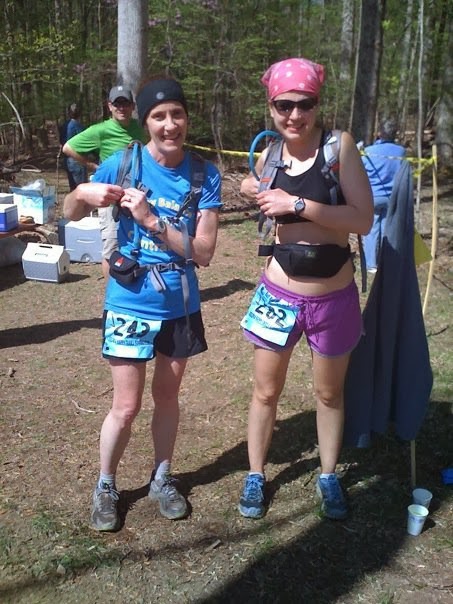 Mile 38. At this point, we knew we were going to make it!
Notice how my clothes just kept coming off... 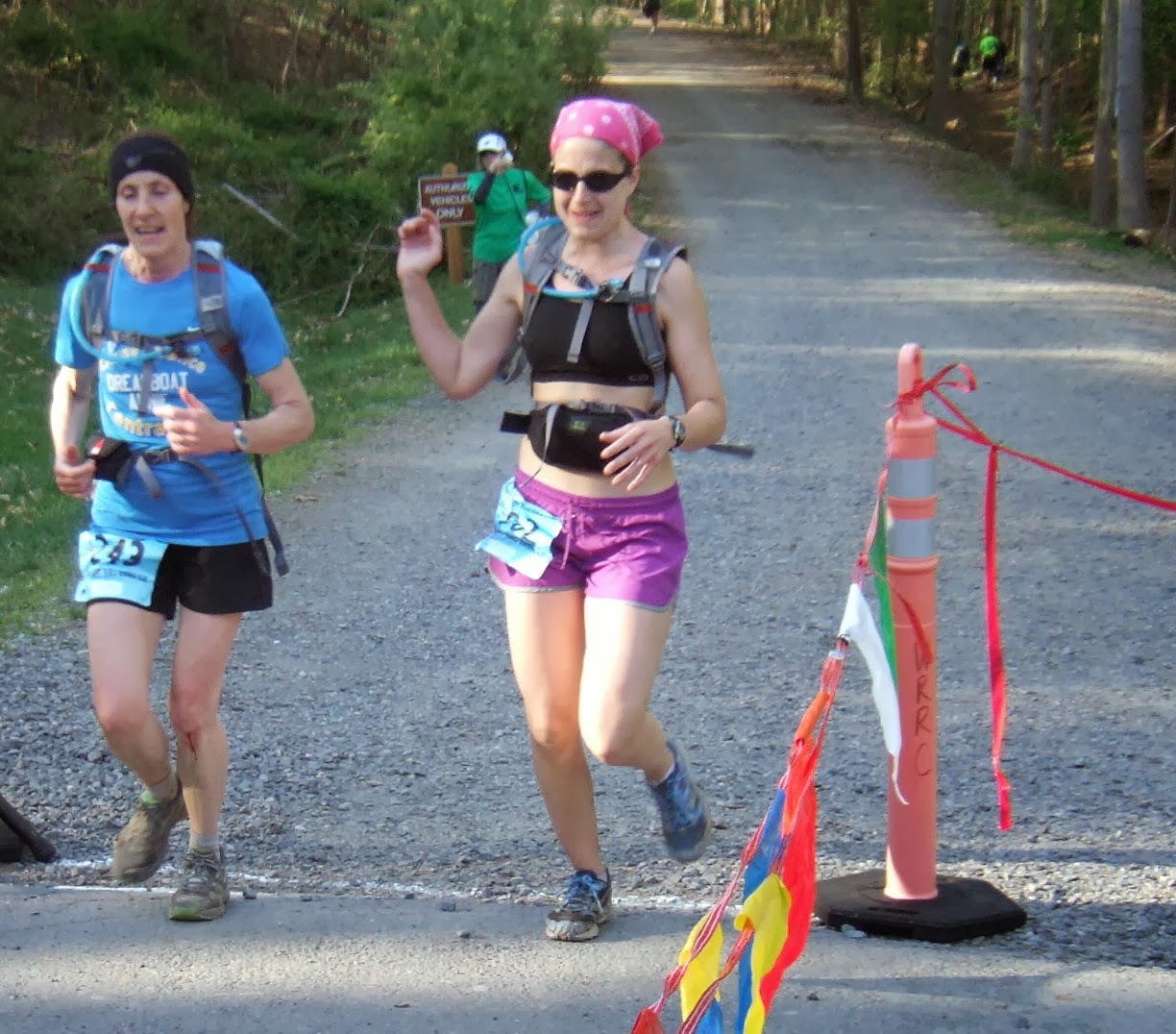 We finished together and we finished strong! On second glance, I look a little delirious! 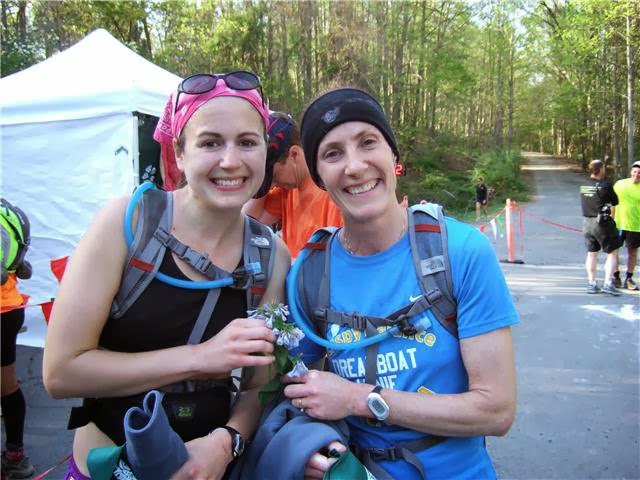 We don't look like we ran for eleven hours and twenty minutes, do we???

Running a 50 miler was an awesome experience. I will probably do one again... eventually... but I'm not in any rush! This race was just too perfect!

Do you have any ultra running goals?
Do you enjoy trail running or prefer the road?
Who is your favorite running partner?