Hello readers! A few months ago I wrote a piece for the blog Jun Dishes. I would like to share it with you all here, on my blog! But be sure to go check out Jun Dishes. I discovered her blog through my love of the reality TV show Big Brother (Jun won Season 4 and is one of my favorite winners!). She has lived an interesting life and some of her posts are sure to make your jaw drop. That's why I love Jun!

Anyway, here is the piece I wrote. I elaborated on it for my readers. It was initially only about 500 words... and you all know it's hard for me to say something in 500 words! 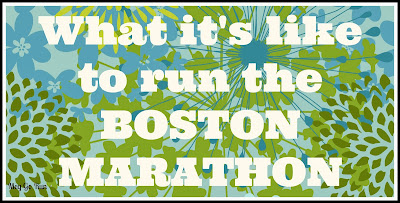 Running a marathon is a unique experience that most healthy people can accomplish if they are willing to put in the training. Marathon running has become extremely popular in the past few years. Still, only 1% of the population has run a marathon. Of that 1%, only 8-9% qualify to run Boston.
A few years ago, I worked my tail off and ran Boston in 2009. I get to do it again in 2014- provided my knee cooperates! I’m cautiously excited. 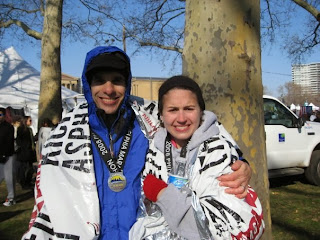 My friend Chris and I after qualifying for Boston at the 2008 Philadelphia Marathon.
Yes, I was in pain! Yes, I cried a few times during the race!
3:38:08 (Qualifying standards were a little lower back then.)

A day or two before the race you head to the Expo, which is held at the John Hynes Convention Center. There, you pick up your packet – which includes your bib, timing chip, shirt, and other goodies. There’s an extensive collection of Boston Marathon running apparel for sale. It’s severely overpriced but most runners buy a jacket anyway!

My cat puked on mine. Don’t worry, the stain came out.

The Expo is only a block from the finish line, so runners stop by to have their picture taken at the most famous finish line in the world!

Chillin' on the finish line.

The evening before the race, runners flock to area restaurants to eat all the carbs in sight. Early reservations are good because marathon morning starts early with a 6:30am bus ride to Hopkinton. 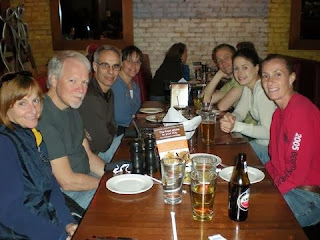 Dinner with my pals in Watertown.

Ready to board the buses!
Those are my friends Chris, Donna, and my mother-in-law, Deb. We promised to run the race together and take tons of pictures along the way! As you will see, we lived up to our promise...
The Boston Marathon is actually a marathon to Boston, starting in Hopkinton. At Hopkinton High School, an Athletes’ Village is set up for runners to congregate. The race doesn’t start until a few hours after your arrival.

There is A LOT of waiting around in the Village. You can tell the seasoned runners from the newbies. Seasoned runners bring inflatable rafts to catch a few Zzzzs before the race. Newbies (me) bring a poncho.

All I remember was being very tired and nervous!

Port-o-Johns are a runner’s best friend. I never saw so many port-o-johns in my life until Athletes’ Village.

This picture probably only depicts 5% of them.
** Tip: After you use the toilet, get right back in line. By the time it’s your turn again, you’ll have to go!**
Two F-15s fly overhead as the race begins in waves…wheelchair racers, elites, and then the “common folk” broken into three more waves. 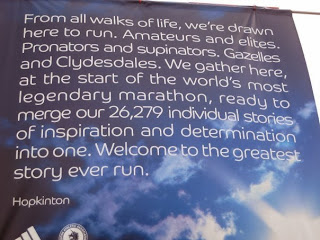 This huge sign hung at the exit of Athlete's Village. Every single one of us passed it on our way to the starting line, which is about a quarter mile down the road. Talk about inspiration... 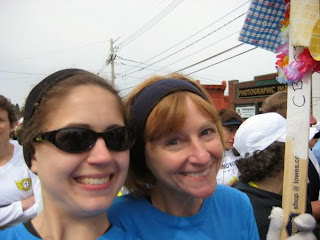 My mother-in-law and I at the start. Happy as larks!

The scenery of the race is small town Massachusetts, passing through several small towns and colleges until the final finish line on Boylston Street. Friendly spectators line the course.

Around Mile 13, the course passes by Wellesley College, where the college girls are out cheering. Many of them offer kisses to sweaty runners.

Heartbreak Hill is around Mile 20. It’s really not that heartbreaking and gets more hype than it deserves. I mean, we live in Central PA for goodness sake... we're used to hills! 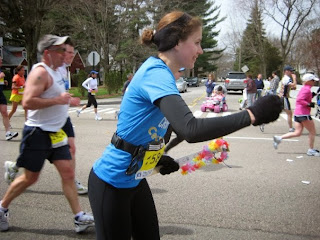 You see what's in my left hand? It's a wooden paint stick with a fake Hawaiian lei wrapped around it. We took turns carrying that the whole race. And we wore matching t-shirts so we wouldn't lose each other.
When you see the Citgo sign in the distance, you know you’ve almost made it! Boylston is just around the corner! 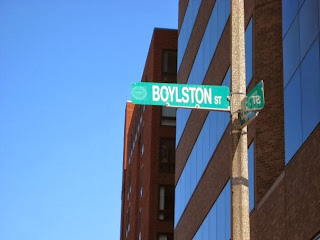 Hang a right on Hereford and a left on Boylston... There's the finish line!
As you cross the crowded finish line, you are handed a medal and mylar blanket. 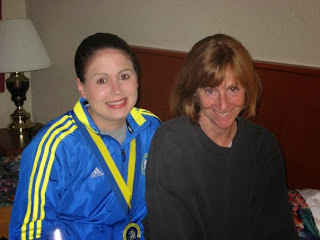 Showered and cleaned up-sportin' my medal!

3am train ride home. I swear, I had fun! 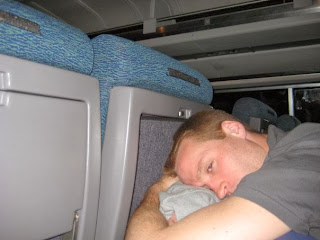 Paul had fun, too. It's exhausting spectating at marathons!
He always makes it a point to clap at least 200 times...
(Inside joke, sorry! How rude of me!)

Have you ever run Boston? What was it like for you?
What race is your favorite one you have run?
Have you ever stopped to take pictures along a marathon route?

Email ThisBlogThis!Share to TwitterShare to FacebookShare to Pinterest
Labels: What it's like to run the Boston Marathon