I guess I have to run the mile.

I accidentally PR'ed in the mile this week.


On Wednesday, I ventured over to the Messiah College track to do some speed work. For the past couple weeks, I have been tossing around the idea of running the Harrisburg Mile in July. Running the mile is NOT fun, but after looking up my previous times from 2008 (6:12) and 2009 (6:19) I realized I am probably in shape to PR this summer.

So I better get some speed training in, right? My plan was to warm up for a half mile, then sprint the straight aways and jog the curves. I would do that for 2.25 miles, then do a quarter mile cool down. As usual, I was pretty pumped up to do this. Despite the heat (at least 80 degrees!) I was ready to rock it! 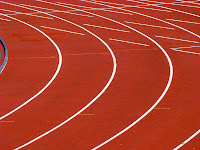 Of course it sucked. Speed training always does. I felt close to puking many times (more so while jogging than while sprinting), but like one of my coaches said, "Anyone can run and feel good." So true! I want to get faster... and the only way to get faster is to.... RUN FAST.

Later on in the day, I uploaded my Garmin to check out my pace. Well, it turns out, the second mile I ran during my speed work that afternoon was a PR for me- 6:10!!!!

I wonder what will happen if I run a proper mile (no sprinting/jogging) and rest a few days beforehand? I guess there is one way to find out. I'll be running the Harrisburg Mile on July 17th.