Happy Monday!
I hope you had a great weekend.
Mine was wet and muddy!
There was also sushi and cats.

TGIF!!!! My day started with a lifting session. Chrissy hijacked my towel, but I love morning time with my little buddy! 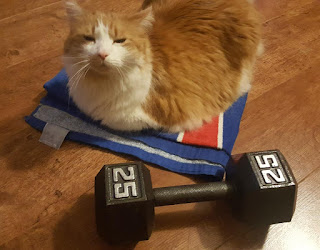 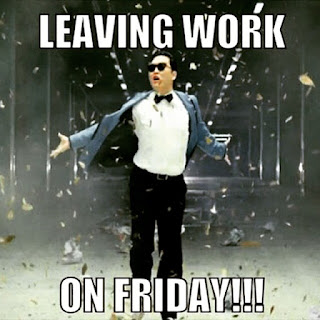 When I got home, I went to town on my puppy puzzle. This took me a long time to finish because I didn't have a lot of time to puzzle during the week. 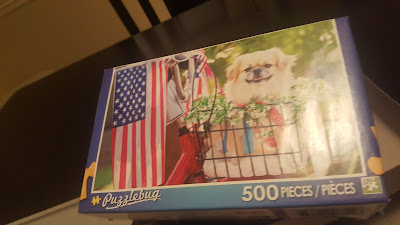 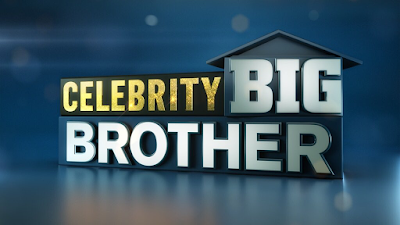 The morning was full of my favorite morning activities.. cats, coffee, puzzles, podcasts, and CNN. I did a fun birdhouse puzzle in no time. It was only 500 pieces. 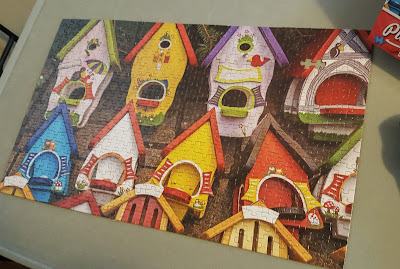 While I did the puzzle, I listened to a True Crime Garage podcast called The Murdered Joggers. Paul asked me if it scared me. I said no because I'm not a jogger.

Later on in the afternoon, I met Kristen on the AT at 850 in Marysville and ran with her to Duncannon. She did 28 miles that day and I was joining her for just the last little bit.

I wasn't about to complain when I was only running 7.5 miles and my friend was doing nearly 30, but I got pretty cold and hungry after the rain started. Kristen led the way and powered up all the hills and navigated through lots of rocks. She is training for a 100 miler and she will crush it. 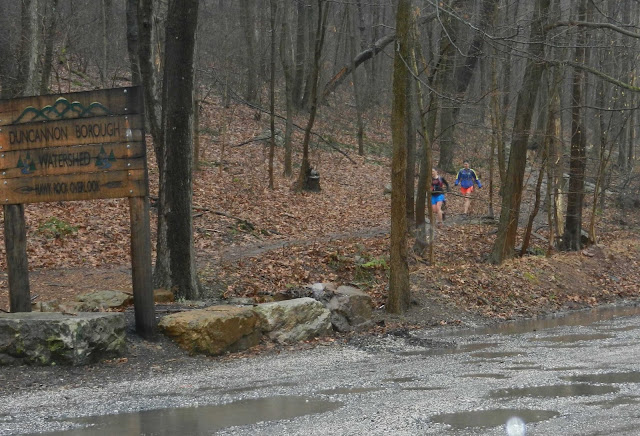 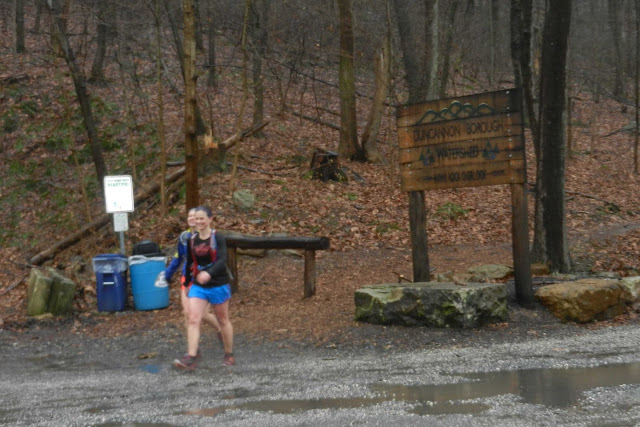 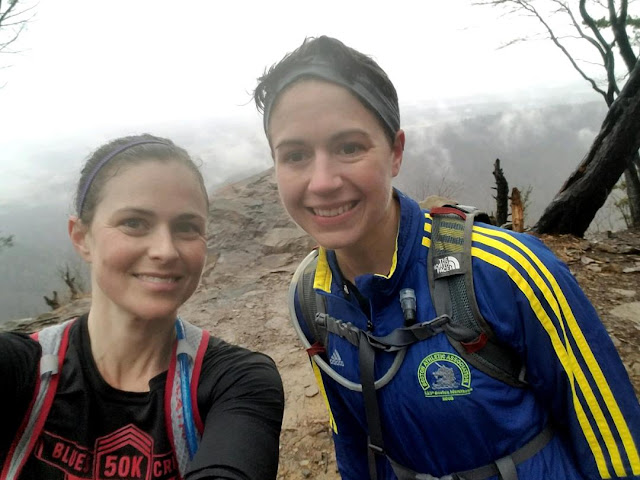 It was very eerie on the top of the mountain. You know the sound of rain in the woods? Then picture lots of fog. We were up there all alone and didn't see a single soul...

... until we were coming down the mountain and were about 1/2 mile from the parking lot. I saw a figure up ahead. "There's someone up ahead!" I told Kristen. She knows my fear of being murdered and doesn't share the same fear. "They're walking away from us and they have an umbrella," she told me. I calmed down.

When we got to the parking lot, there was my dad standing with an umbrella! It was him! He and my mom were picking me up to take me back to my car and he decided to walk up the trail a bit.

It was fun to see my parents that day and it was really nice of them to take me all the way back to my car!

Oh, on our run, Kristen told me I reminded her of Unikitty from the Lego Movie. I had never heard of Unikitty before, but she explained to me that Unikitty is always sunshine and rainbows, except when she gets mad, it's like a flip switches and she is ENRAGED. Hmmmm, I can sort of see that! Of course had to Youtube Unikitty when I got home and was laughing so hard! 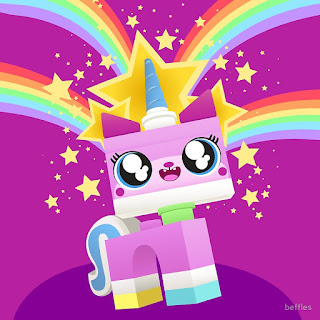 That night, Paul and I met Randy and Michael for sushi at Shogun. I ate so much! 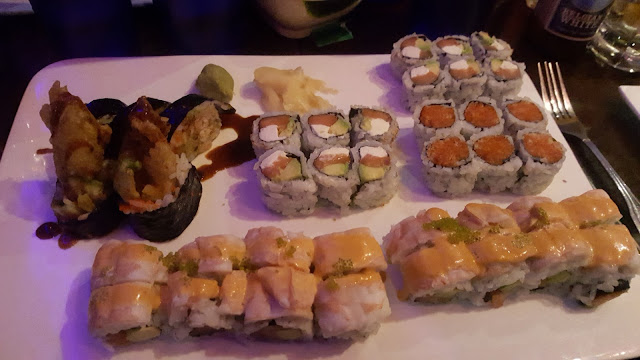 It was great to catch up with Randy and Michael. I hadn't seen them in a very long time. 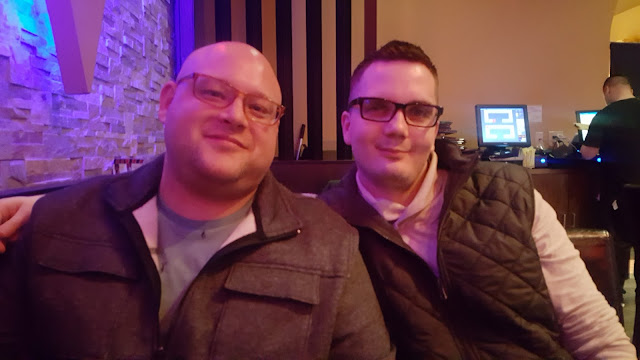 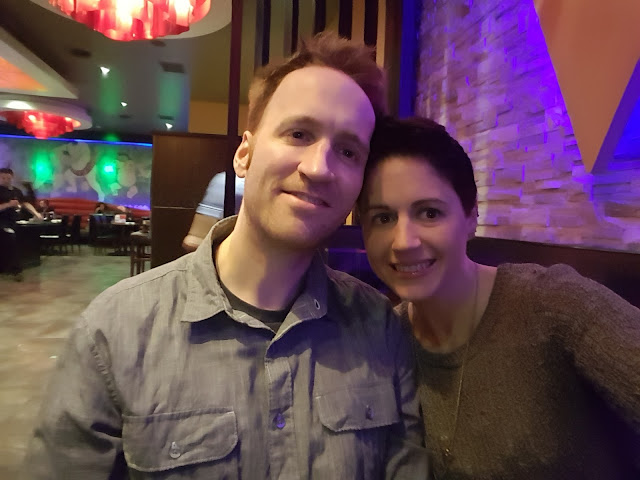 After dinner, Paul and I popped into Kohl's. Paul never buys himself things, so I urged him to buy this really awesome pair of sneakers he found. "I buy myself stuff all the time, you work hard and deserve new shoes!" I told him. 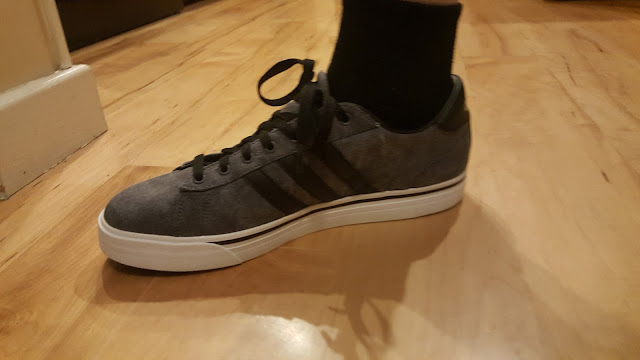 When I woke up, I could hear the rain pouring down. I was supposed to run the Squirrely Tail Twail Wun 1/2 marathon at Pinchot Park that morning but was now having second thoughts. Did I really want to run for several hours in the rain?

After coffee, I decided to put my game face on and embrace the weather! Actually, the weather didn't end up being bad. It was high 40s with drizzle. It was the condition of the trail that was terrible. 90% of the course was either deep, thick mud or basically a stream of running water. There were more than a dozen spots where you ended up running through water nearly up to your knees. There was also one legit creek crossing where the water was up to my shorts. There was a rope to hold onto, and hold onto it I did. My mom would be so pissed if I drowned at the Squirrely Tail Twail Wun. 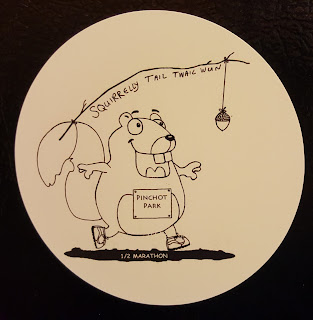 I'll do a full report tomorrow, but here is me and Ana after the race! 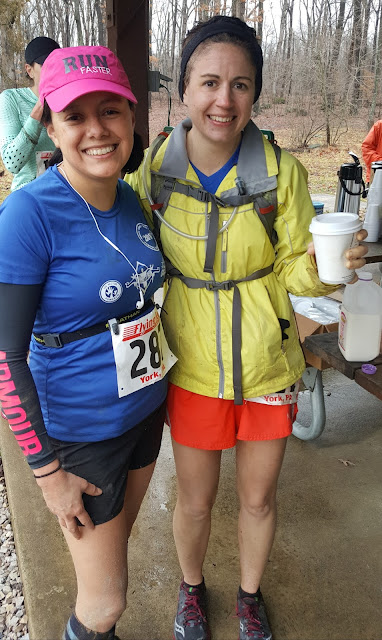 I was useless the rest of the day! Hungry, cold, tired, achy. There was lots of laying around, stretching, and eating going on. I also continued working on a puzzle because... well, that's what I do! 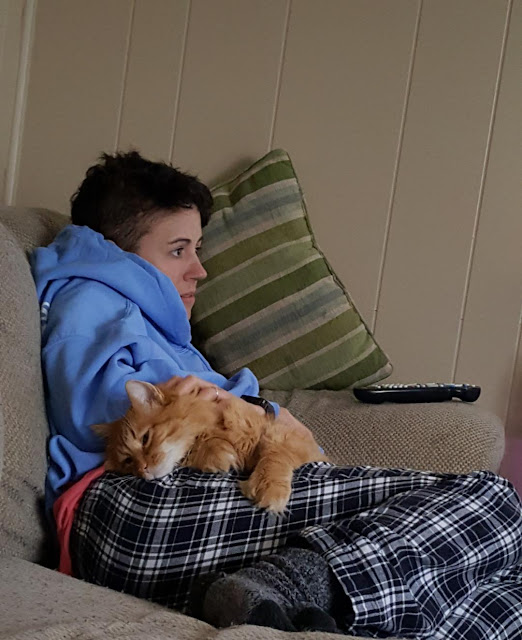 I'm finishing up this post before we watch the Celebrity Big Brother Finale, but that's what we're planning on doing tonight. I hope it's a great episode with a satisfying winner! Go Ross!

Tell me something fun you did this weekend!
Posted by Meg Go Run at 5:30 AM