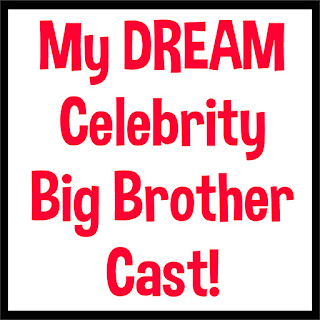 Tonight is the night!

While other countries have had celebrity seasons of BB, this is the first time for USBB. The celebrity season is much shorter than normal- 3 weeks compared to 3 months. The house guests have already been in the house for about a week, and yes, I have spoilers about who won HOH and veto! (jokers updates, reddit, and Big Brother Network are three places to keep up with what is going on in the house if you want to do more than watch the broadcast shows but don't want to watch live feeds.

These are the "celebrities" on the cast. (I'll also include what they're best known for and whether I have any thoughts on them.)

James Maslow - Never heard of him. Apparently he was part of the boy band Big time Rush. He describes himself as "woke" in his cast bio. While I think it is good to be woke, it's a little douche-y to describe yourself as that, isn't it?

Keshia Knight Pulliam - She was Rudy on The Cosby Show.

Mark McGrath - Lead singer of Sugar Ray! Did you ever hear the story about how when I was i college, I touched is sweaty bicep?

Metta World Peace - Never heard of him. But I have heard of Ron Artest, and apparently they are the same person. He was an NBA player. I wonder if Paul will like this casting choice?

Omarosa - Professional horrible person. I almost decided not to watch the show due to her support of the racist, lying, piece of shit president.

Shannon Elizabeth - Actress from American Pie and other movies.

While I knew CBS would never be able to get A-list celebs, I'm actually pretty impressed with this list of house guests... especially because many of them are FANS of the show! It's always more fun to watch BB when the house guests actually know how the game works.

So are you wondering who would be on my dream Celebrity Big Brother cast? Here's my list!

Shannon Elizabeth - Giving her props for being a super fan of the show!

Ross Matthews - Again, a huge fan of the show, so he should be there!

Neil Patrick Harris - ANOTHER HUGE FAN OF BB! I thought maybe he would do it but of course he didn't. He's too famous.

Lance Bass - He's also a fan of the show! I thought maybe they would get him on the show because he must be like a C-list celeb at this point, right?

Bobby Moynihan - I know I'm starting to sound like a broken record, but he is a fan of the show too. He came into the house last season to host a comp and he was HILARIOUS. If he was a house guest, it would be such good television.

Justin Timberlake - Okay, here me out. I do NOT like him. But it is fun to have someone to root against. Also, I doubt he is a fan of the show, so all the super fans would vote him out and it would be fun to see him downtrodden. Holy moly, I am mean!

Kathy Griffin - She is a fan! Can you imagine her in the diary room? She would be HILARIOUS.

Nancy Grace - My girl Nancy! I could see her and Kathy in an alliance and dominating the whole season!

Lady Gaga - Every time I see her interviewed, she seems like such a nice, grounded, caring person. It would be interesting to see someone so super famous stuck in a house!

Kellyanne Conway - You have to have someone to root against, right? She lies so well, she may actually do a good job! Kathy would rip her apart.

I know most of you do not watch Big Brother... but is there a celebrity who would compel you to watch?
Posted by Meg Go Run at 5:30 AM