That's all I got because this is a LONG one.

Friday morning started out with a leisurely run, but as soon as I arrived at work, it went downhill. Thankfully, I have some awesome work friends who are good listeners and they cheered me up! Spending time with my friends also made me step back and have some perspective on things. So what if I had a shitty morning? I have awesome friends, and that trumps a shitty morning!

After that, the work day was a whirlwind, but it was not bad like the morning. I even made a kid who was in a sour mood smile. It took 17 minutes, but I finally told a joke lame enough to make the 9 year old laugh. WINNING!

I ran a bunch of errands after work because my car was going to get inspected the next day and I needed everything taken care of before then. My first stop was Wegman's, a place I absolutely abhor because it is too big and I can't find anything in there. The only reason I go is because their boneless skinless chicken breast is $1.99/lb. I usually get a couple packs, but of course I go through chicken so fast that I wind up at Wegman's more often than I would like. Luckily, I got out of there without killing anyone. 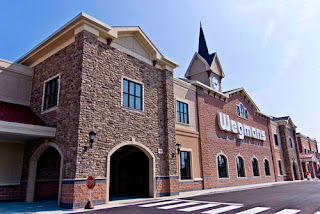 Paul says, "Why does Wegman's have to look like a freaking castle?"

Next was the library. I got out of there without many problems. I had to pay $5.70 fine but I don't mind fines because the money supports the library and I think the library secretly likes getting the money! 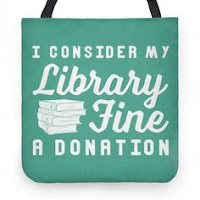 Then I went to the bank and my head almost exploded. The guy at the teller beside me was RANTING about political stuff and he was clearly a whack-a-doo. Who rants about political stuff as loud as the can to the teller at their bank? Luckily, an old lady started to use the change machine so that drowned the whack job out for a minute. I was so happy to get out of there. 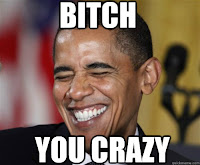 I went home before dropping my car off at the garage. We go to a place about a mile away from our house because I have to walk or run home to drop it off and pick it up. (We only have one car and Paul doesn't drive.) I decided to run home because it was cold, I was hungry, and I just wanted to get home and take a shower.

I don't understand all you runners who run after work. When I run after work I feel like Phoebe from Friends. I am all wobbly and weird. I am faster than in the morning but it doesn't feel good at all. I am definitely a morning runner through and through. Hey, know thyself, right?

As soon as I got home I showered, got in my jammies, poured a glass of wine, and broiled up some cheese. That's right. I broiled cheese. My brother made up this recipe. All you do is throw some shredded cheddar cheese on a pan and broil it up until it's all crispy. It is so yummy. I made the cheese and toasted to him. I will see him in about a month and I can't freaking wait!!! 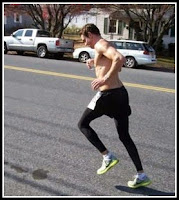 My brother, the shirtless runner. 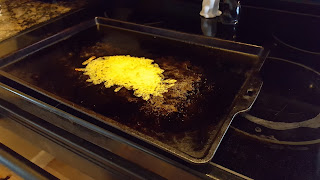 A food photographer, I will never be. 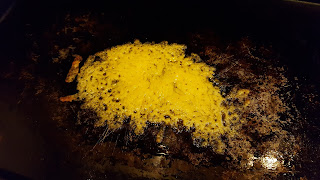 Armed with my cheese and wine, I curled up on the couch to watch Sex and the City. I had the last couple episodes of the series to watch and it was making me cry. It really gets poignant at the end. I started to wish I had really close girlfriends. I did growing up, but not anymore. Friends move away and it's impossible to stay completely connected, even with social media.

Paul was out with his friends so I finished the night doing a puzzle and reading the new Mary Higgins Clark book I got from the library that day.

I awoke Saturday morning to snow on the ground. 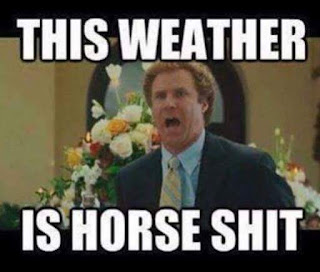 It was nice having a day with nothing to do. I took my time waking up. Then while I was getting ready for my run, I noticed blood on the floor in the music room! Time for some Domestic Forensics. We still don't know where the blood came from, but I am on the lookout for a mouse carcass or poop with bones in the litter box.

I headed out into the cold, dreary day for a long run. My goal was to do a LSD. My pie in the sky goal was 15 miles. I wasn't sure it was going to happen because I was tired by mile 4. I did get a pep in my step toward the end. Mentally, I needed that long run to make me feel confident for my half in two weeks. I have no clue what my pace was because something is wrong with my Garmin. Hmmmm.... anyone have a Garmin I can borrow for my half???

I decided to skip my walking cool down and hop right in the shower. Fate had another plan. My car was ready for pick up at the garage, so I got a nice 1 mile cool down walk to get my car. Even though I wasn't hungry, I made myself a protein shake (banana, vanilla whey, water, ice) to drink on the way. Later on when I had an appetite, I housed a turkey and cheese sandwich with chips on top. It is my new favorite post run food!

That evening, we went to Geoff and Bree's for game night. But we didn't play any games, we just talked the whole time! It was great!

We had zero plans for Sunday, but by the time we rolled out of bed, we had made plans for ourselves. First we hit the gym. Paul has started working out again and he wanted to lift. I got on the treadmill for a couple easy miles.

After we came home and showered, we headed over to Union Deposit to putz around Gabriel Brothers and Burlington Coat Factory. The reason we were in that neck of the woods was because Empire Asian Bistro has half priced sushi on Sundays. We picked some up and took it home to eat while we watched Survivor.

Here are some of my deals of the day!!!! 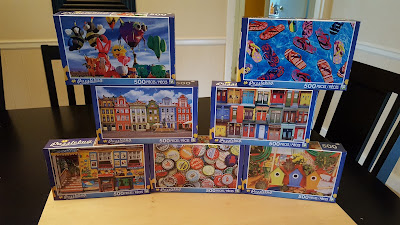 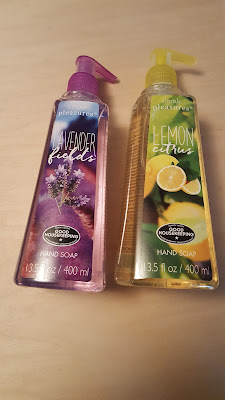 We needed new hand soaps. I love lavender. 99 cents each from Gabe's.... can't beat that! 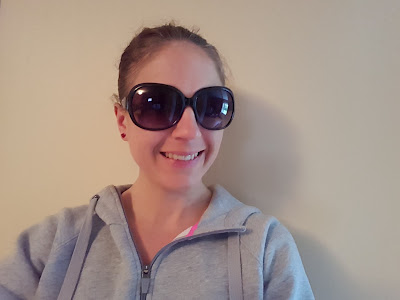 So I have been needing some oversized black sunglasses. I am not a name brand girl, but these Guess sunglasses were the best ones they had at Burlington... $14.99! 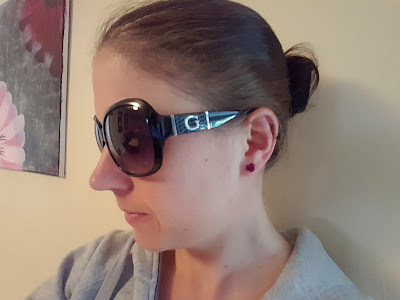 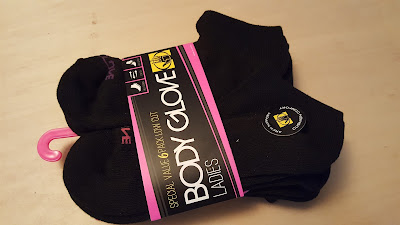 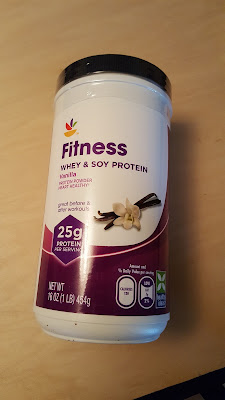 My favorite Pringles were not on sale BUT sometimes you just gotta treat yo'self! 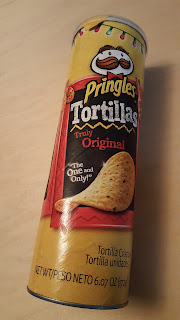 These sports bras were $3.99 at Gabe's! Normally sports bras are like $15 and I refuse to pay that much for something that's just going to end up stinking in a couple weeks anyway. 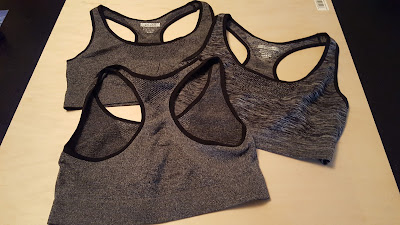 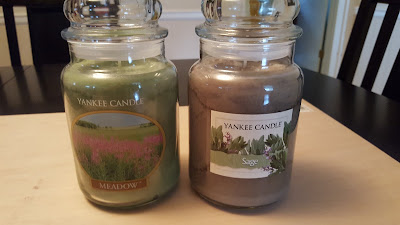 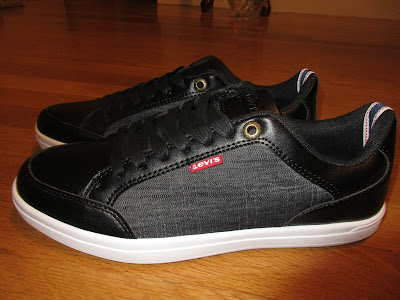 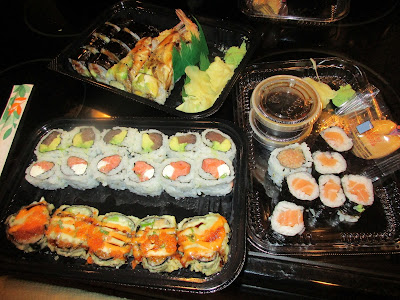 And we shall end on a beautiful picture of Chrissy, just because... 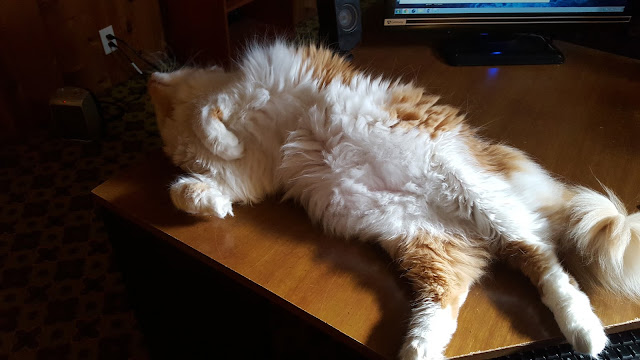 Talk about an awesome Sunday!

Do you tend to rack up library fines?
What is your least favorite grocery store?
Any fun purchases this weekend?
Do you like to pick out stylish items for your partner?
Posted by Meg Go Run at 5:30 AM