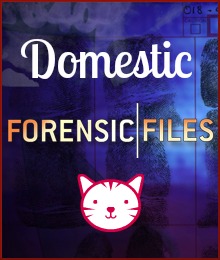 (I have a theme song for Domestic Forensics. I wish you could hear it because it's pretty funny.)

On Saturday, Domestic Forensics in the Michael-Cooney household was in full swing. I woke up around 9:00am and walked straight to the bay window in the music room (our front room) because I wanted to see how much it snowed. Then I went about my morning making coffee, doing my puzzle, etc. Paul was still sleeping by the time I was getting ready for my run. I was zipping around the house getting all of my stuff in order and walked through the music room. It was THIS trip into the music room that I saw blood on the floor! And not just a drop, but several significant little... I don't want to say puddles, but it was more than droplets.

Here, see for yourself. 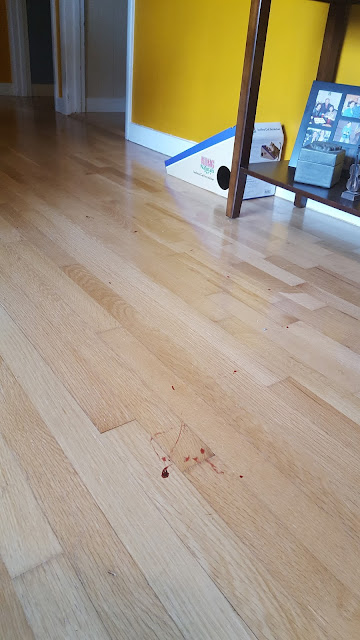 That's the full crime scene. Here are some close ups. 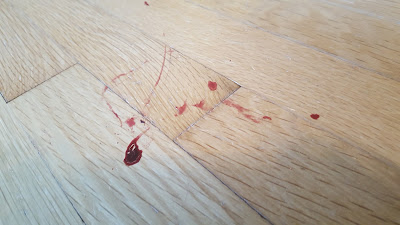 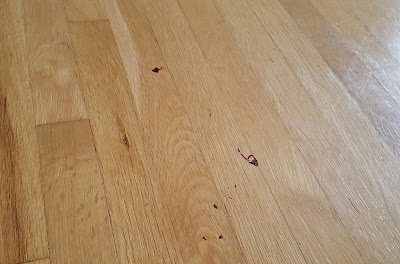 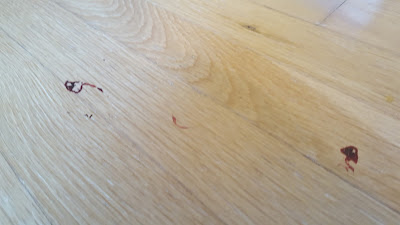 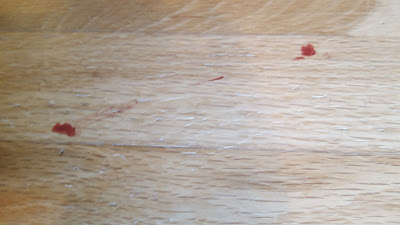 Since I had been chillin' with the kitties all morning, I knew they were fine and not injured, so my first thought was PAUL! Had he hurt himself? He was sleeping soundly in bed beside me but hadn't gotten home until about 3:00am the night before. Did he injure himself while he was out with his friends and didn't notice he was still bleeding when he got home? Or did he have a seizure? One time, he had a seizure in bed and didn't know it. He cut his face on our bedside table and threw up on the floor. He haphazardly cleaned everything up but didn't really remember it. He bled all over the floor during this time. Had something like that happened again? (Note: I was at work when that all went down.)

I woke Paul up and asked him if he hurt himself. He said no. "Well there's blood all over the floor in the music room," I told him. He insisted it wasn't his blood. Okay, I believed him.

Was it my blood!? I had cut my toenails the night before and sometimes I cut them a little too short. No, that was ridiculous. Did I get my period!? I know that sounds silly but I was running out of ideas!

I checked over the cats. Chrissy and Jelly didn't have an ounce of blood on them. I rifled through their fur but didn't find a thing. As you can tell by the pics, the amount of blood was significant. Surely I'd be able to find such an injury that would cause bleeding like that. But they didn't even have blood on their paws.

The only thing I could think of was that there was a mouse or something and Christmas killed it. But then where the hell was the mouse? We looked all over the house... under all the furniture and even ON the furniture. There was no dead animal. Had he eaten the entire thing? I feel like there would have been more of a mess, or some sort of remnants if he did that. I know he's a pig, but he can't swallow bones, can he??? And if he had bit into a mouse or something, shouldn't there be blood on his face that he wasn't able to clean off?

IT'S STILL A HUGE MYSTERY TO ME AS TO WHAT HAPPENED!!!! I wish we could get DNA analysis of the blood. It's got to belong to either me, Paul, Christmas, or Jelly. UNLESS....

Okay, this is the most far-fetched idea I can think of but what if someone broke into the house last night while I was sleeping and before Paul got home? What if Christmas attacked an intruder and they bolted? Cat bites hurt. Believe me, I know. Our doors were locked, and logically, wouldn't I have heard this all go down? But I didn't even wake up last night when Paul got home.

Actually, my little brother may be on to something...

Tyler Michael I stopped by last evening to get my fanny pack that I left there last game night. I was in the area and let myself in with the key you gave us. I didn't want to wake you because it was so late. After retrieving the fanny pack, I got incredibly thirst and helped myself to a glass of 1% milk. After relaxing on your music room couch and finishing the milk, I stood up to walk back to the kitchen. I dropped the glass. My bat-like reflexes kicked in and I attempted to cradle the fall with my foot. The glass broke when it hit my shoe and cut my leg. There were only 3 pieces I cleaned it up very well with a wet paper towel in case smaller grainy pieces existed. I must have bled a little on the floor after cleaning up the glass. It was really dark and I didn't want to wake you guys. I'll try to find you a matching glass at goodwill sometime. We go often.