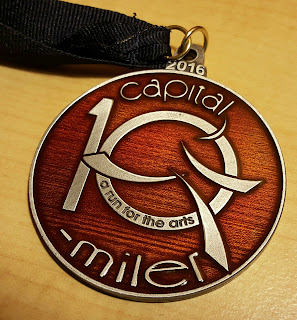 First and foremost, I want to give a shout out race director, organizers, and volunteers at the Capital 10-Miler! This is a fun, VERY well organized race! If you live in Central PA, I urge you to come out and run it next year! I know I will be back!

Hola blog readers! I will cut to the chase and tell you I didn't meet my goal. I ran a 1:13:35. I'm happy and okay with it because what am I gonna do, cry about it?

If I'm looking for where I went wrong and how I could have cut 65 seconds off my time, I guess I could say there was a head wind for about 3 miles. Other than that, there is really no excuse other than the whole time I was teetering on the line of "I am pushing myself just hard enough because it is sucking the right amount" and "I am pushing really hard and this sucks  A LOT!" I never got to the point where it sucked A LOT. I didn't get a side stitch and I didn't get calf cramps. It is nice to have a race under my belt in which those things did not occur!

The good news is that even though I didn't reach my goal (1:12:30), I was 61st overall, 10th female, and 2nd in my AG. Those are the "accolades" but the real win is that I reconnected with so many running friends at the start (and during!), and had so many friends and family out cheering me on that I felt like I had already won before I even started. Paul organized some of our friends to come out and cheer, which was a surprise. He is the best and my friends were so nice to give up their Saturday morning to come out and cheer on the runners! I'm not worthy.

Now I'll get into the details! I figured I'd get the big stuff out of the way right in the beginning in case you wanted the Cliff Notes version! If that's your jam, you can just scroll through and look at the pics.

The night before the race, I laid out Flat Megan. I decided to wear a fuel belt because I was afraid of experiencing calf cramps and dehydration like I did in two other recent races. There was a nice little pocket to stow some Ibuprofin and salt tabs. 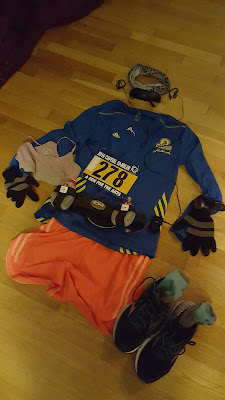 My husband laid out Flat Paul. He chose a baggy shirt to ensure fuel range of motion for clapping. Poor Flat Paul has his shoes on the wrong feet! 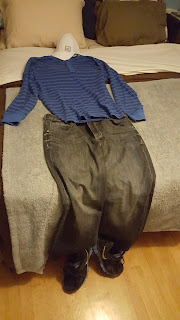 35 miles away in Millersburg, my dad laid out Flat Dad. Notice, he's running with scissors. 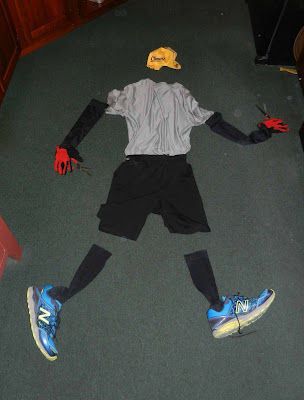 I wasn't too worried about getting to bed early the night before because I knew I would wake up before my alarm went off... and I sure did. I ended up getting out of bed at 6am. It gave me plenty of time to drink coffee, have breakfast, shave my legs, go to the bathroom 200 times, and clean half the house.

I'm going to be honest, I wasn't feeling great mentally that morning. I was just kind of down, asking myself all kinds of questions and pretty much doing a fair amount of negative self talk...

Why do I race?
Why do I put pressure on myself?
This is stupid.
I should be in bed right now.
I'm too old for this shit.
Why am I so nervous?
I'm never gonna PR in the marathon again if I'm nervous for a little 10 miler.

Dang, I'm not very nice to myself, am I?

Paul is so wonderful though. He knows I'm weird before a race. When we got to City Island (race start) he chilled in the car while I did my thang. I went to the bathroom a couple times, ran a mile to warm up, made a final decision on the whole long/short sleeve thing, and caught up with some running friends I hadn't seen in awhile. It was great to see my pals!

During my warm up mile, my friend Gary, who was also warming up, spotted me. "Meg Go Run!" he screamed. "GARY, YOU SCARED THE CRAP OUT OF ME!" I shouted. Yeah, I was a bundle of nerves!!

As usual, I was in the port o john as they played the Star Spangled Banner. My huge apologies to "No Last Call" (the awesome band performing at the race) and to America. 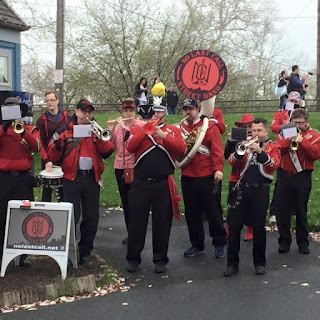 I got out of the loo just in time to see the huge group of friends Paul had organized to come out and cheer on the runners. I gave out hugs, tore off my long sleeve, and BOOM the race started!

First we circled the island and headed up along the river to the Green Belt path. A couple of the course monitors were running friends so it was fun to see them. They put a little extra pep in my step! I passed my dad around mile two. He looked strong! I saw Paul's aunt handing out water and I even dropped my first chance at water trying to wave and say hi to her! It was no big deal, I wasn't that thirsty. I'm a robot. (Just kidding, I get CRAMPS when I'm dehydrated! Dang, I remember when I was young I barely needed water at all!) 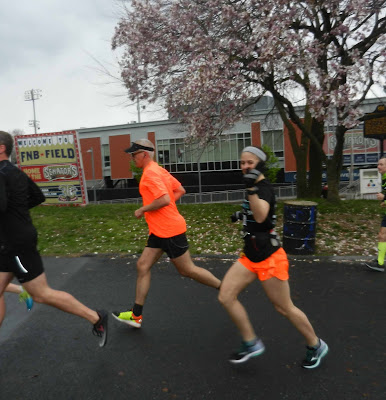 Running out the Green Belt gave me an opportunity to cheer for the leaders on their way back from the Green Belt loop. The top runners were machines. They made it look effortless! I said good job to every single person. My dad's buddy Clayton was among the top men and he looked great!

I managed to hang onto my water at the second water stop and took two salt tabs and Ibuprofin. I was trying to do everything I could to prevent cramps, side stitches, and just pain in general. I was feeling okay. It was always hard to catch my breath after drinking water, but I told myself to relax, keep going, and my breathing would even out in less than a minute.

The next section of the course had us running North along the river for a couple miles. At first it wasn't windy, but then the wind picked up and it was a little more difficult. My pace dropped a little here and at one point, one of my miles clocked in at a 7:30. Head wind. It will do that to ya. Luckily I saw my family and friends and a couple running buddies along this section of the course and it was so motivating to see them! I ditched my fuel belt with Paul because I could tell I wasn't going to need it anymore and I thought I'd feel "lighter" without it. 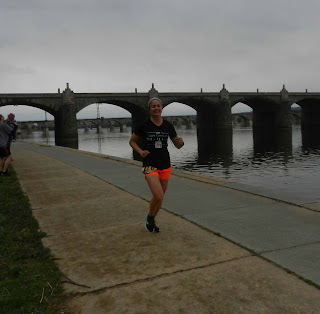 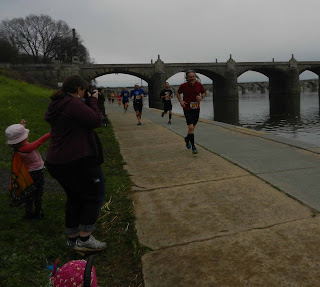 Like I said from the beginning, I was teetering right on the line between the race sucking the right amount and sucking TOO much. The last thing I wanted to do was get calf cramps or a side stitch. I thought I felt a side stitch coming on so I did some deep breathing and I forgot about it until I typed this sentence.

I couldn't wait to get to the Sunken Garden because that is where we got to turn around and gear up for the last big section- running out and back on the Harvey Taylor Bridge. Unfortunately, the head wind was still there while running across the bridge to the West Shore. At this point, I came to terms with the fact that if I was a little slower than my goal pace, I would be okay with it. I was certainly putting in the effort of my goal pace! 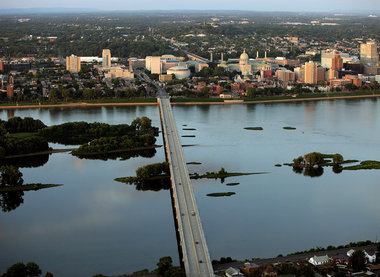 On the way back to the East Shore, the wind was gone. When I was approaching the 9 mile mark, I was starting to relax a bit. It would be over soon and I had run a strong race. Nothing to be ashamed about. The entire time I had been listening (but not absorbing) podcasts and at this point I turned on some ABBA (Waterloo!) and Mika (Lollipop!)

Before I knew it, I was at the City Island walking bridge. There was my mother-in-law, course monitor extraordinaire, cheering me on. I ran over to City Island, and halfway there was my crew! My trainer, JK-L shouted to me, "DIG Megan!" and she did put some pep in my step! Hey, when your trainer tells you to dig, you dig. 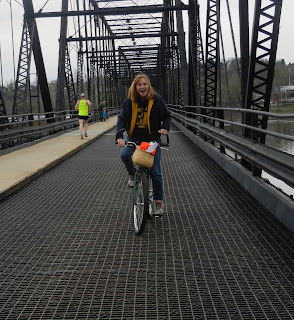 Deb, my MIL, taking charge of the course!

I had enough in me to sprint to the finish line, which is an EXHILARATING feeling that I recommend you all doing! How is it that I felt spent during the race but then could sprint at the end? I blame the crowds, music, and fast twitch muscle fibers! 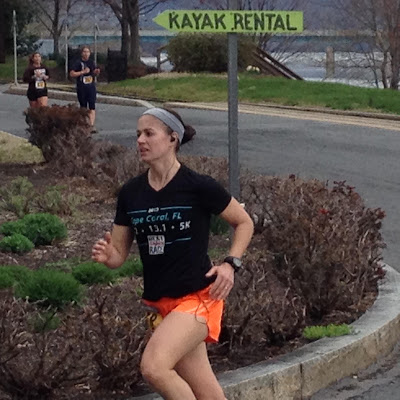 This photo cracks me up because it looks like I am really determined
to rent a kayak! Thanks Steve & Nora for the photo!

When I saw the timer said 1:13 and some change, I wasn't disappointed. I was off my mark, but not TOO far off my mark. I was still proud of the race I ran. As soon as I stopped running, the pounding headache started. Luckily, it subsided after 15 minutes or so. I blame that last sprint at the end for the headache! 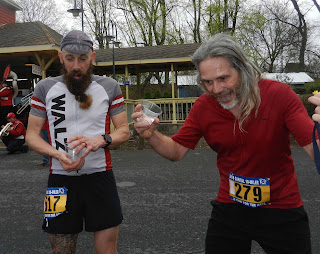 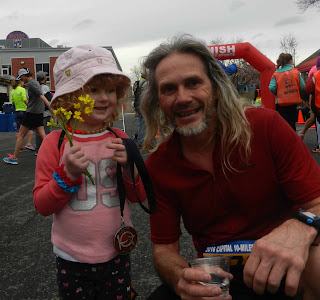 It was fun hanging with my friends and family at the finish line and cheering on the other runners. 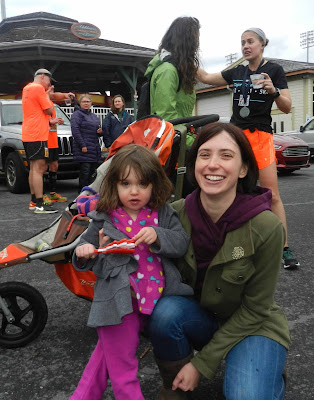 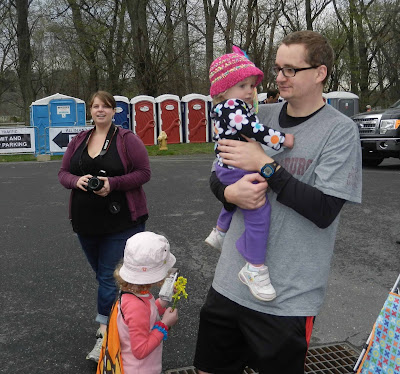 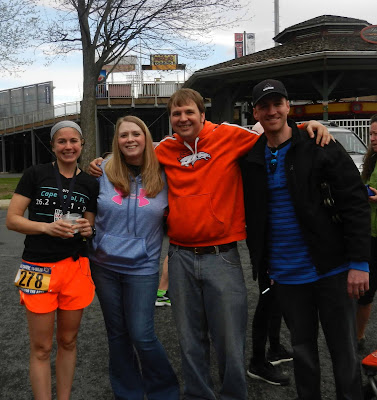 Me and Paul with friends Brittany and Joe 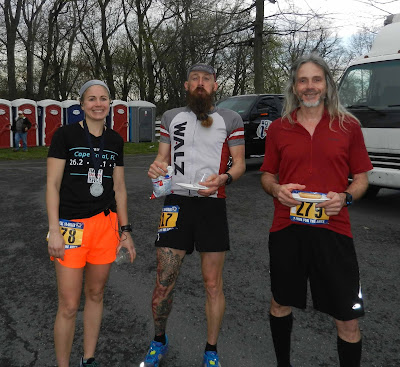 With Clayton and Dad 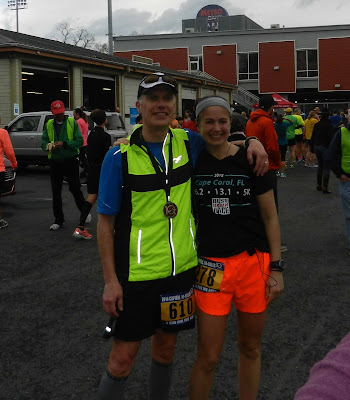 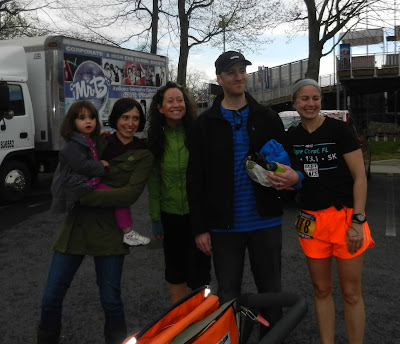 With Alice, Bree, and trainer- JK-L!

I'm not going to lie, I was secretly hoping to do well among the women's field and maybe place in my age group. I checked the stats and I had taken 2nd! It was fun to have Paul, my parents, and mother-in-law there as I accepted my award. I got a really nice coffee mug stuffed with free tickets to various theater organizations in Harrisburg. 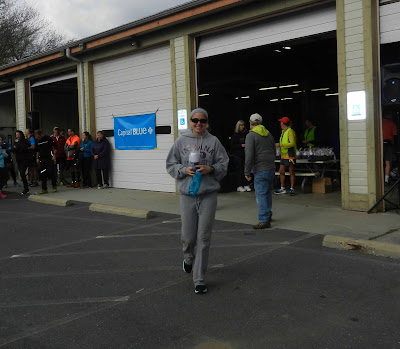 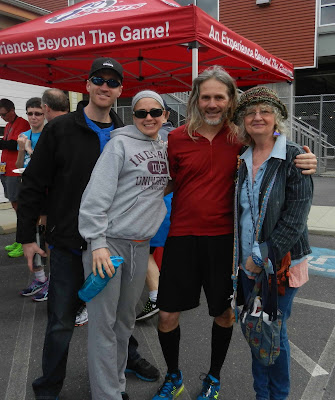 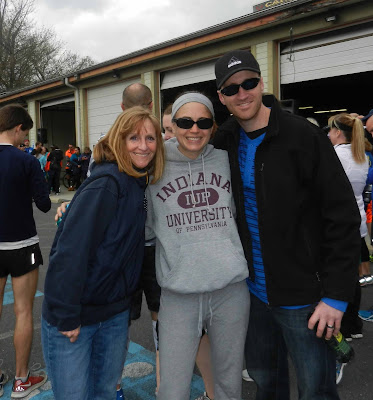 Now I am just hoping I recover well! I did a one mile cool down after the race, went home and ate well, drank water, stretched for 20 minutes, and had Paul rub out my glutes with a magic rolly stick thingamabob. Hopefully this old ass body recovers quickly because I am running a HALF that is basically the same course in 3 WEEKS! Yeah, I need to decide what I am going to do about that. 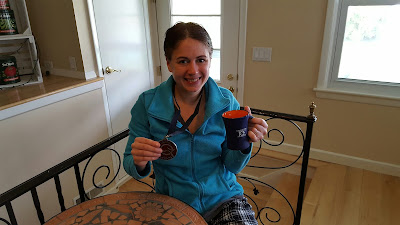 Well, if you read this whole thing, thanks for staying with it for the long haul!

And now for some reflection... I wrote this post right after an endorphin high and now that I have had time to think, I can't help but wonder... Why is it that I NAILED all of my race pace runs... a 5 miler, 6 miler, 7 miler, 8 miler even a 9 miler two weeks ago, yet on race day, I couldn't pull it out?? Was it the head wind? The anxiety? Did I hold myself back because of my fear of cramping???? I don't know. For some reason tonight, all I keep thinking about was that horrible 9 miler I ran two weeks ago at race pace. I was so tired before I even began and had a headache the whole way through... yet I still managed to hit all my marks. Then race day comes and I am fresh and tapered and can't do it. I don't understand. I don't mean to leave this post on a Debby Downer note, but I need to figure out what I can learn from this!
Posted by Meg Go Run at 1:10 AM