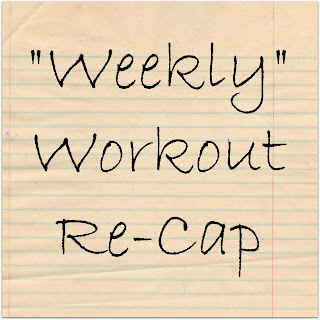 Holaaaah! It's Saturday! That means you get to read my boring recap of all the training I did this week.

My initial plan had me doing 42 miles this week. Even though I was *mildly* sick all week, I ended up adding in an extra running day which gave me 47 miles!

Don't worry, things will go down from here as I taper for the Capital 10 Miler.

Saturday- An 8 mile race pace run with a warm up and cool down totaling 12 miles. My paces weren't even at all, but it did even out by the end. I took a water/walk break halfway through my workout because it was hot and I wanted to! 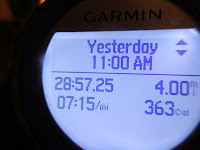 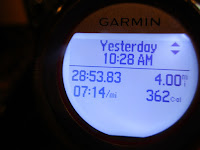 Sunday- 6 lazy miles around my 'hood. My legs were tired but they didn't feel sore. After my run I started to feel sick. I had a sore throat, chills, and I was extremely tired. 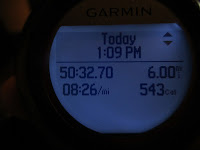 Monday- I lifted in the morning- a little lighter than normal because I just wasn't feeling it. I took the afternoon off work to rest. The thought of talking/singing/moving all day just did not sound fun to me. I was exhausted.

Tuesday- I still wasn't feeling great but I was determined to do my 8 miler anyway. I figured if I was going to be sick again, I'd be even more depressed if I skipped a run. I actually didn't feel bad during the workout. My legs felt strong. I didn't look at my Garmin until I was done. It said I averaged 8:46 per mile. I was a bit surprised because I felt like I was running an 8:20! As it turned out, something must have been wrong with the satellites because when I mapped my run later (to show Paul something completely unrelated) it showed I actually ran 8.4 miles. So my pace was more like an 8:34.

Wednesday- What a weird morning! There was so much dense fog that it looked like I was running through a horror movie! I only got spooked once when a bunny darted in front of me. I did 5.6 miles to even out the 8.4 from the day before. I ran a "la la la" pace and ended up doing some serious negative splits. (Remember when I used to negative split all the time!?) My MP3 player wasn't allowing me to upload anything new, so I was stuck listening to NPR, which wasn't so bad because they were doing tons of coverage from Super Tuesday. As you know, I am following the election, so at least the topics they were covering were interesting to me. I will tell you this workout almost didn't happen. Apparently, I didn't set my alarm the night before. Somehow, I woke up at 5:47- just two minutes after I should have woken up. Whew! That was a close one.

Thursday- One thing Paul and I are really good at is losing water bottles. Paul got me a new one for Valentine's Day, but I left it at work on Wednesday. I swung by Dollar General on the way home so I would have a water bottle to keep with me during my workout on the treadmill on Thursday morning. There's just no way for me to do speed work on the treadmill without a water bottle right there. 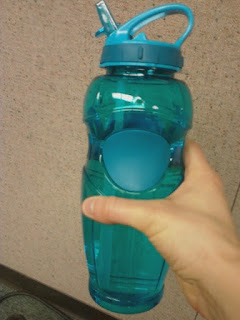 The workout was 6x800 with 800 recovery in between. I warmed up and cooled down with 2 miles, so I did 10 total. I am not going to lie, it was very hard. I ran the intervals @ 6:39 and everything else @ 8:34. By the third interval, I was really hurting. Somehow I willed myself to get through all six, but it was ugly. Want proof? 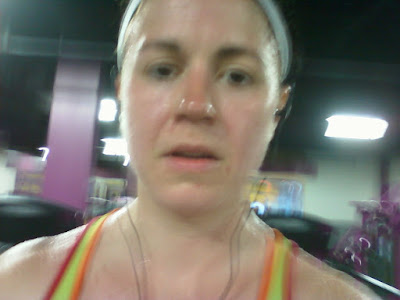 Even the cool down was rough! I started to get chills from being soaking wet with sweat. I only walked for 7 minutes after my cool down because I was just about shivering. Also, my tummy and GI wasn't feeling so good...

I did inquire about the heat issue at Planet Fitness. Apparently there is a problem they are working on resolving. "So you're not trying to kill us?" I asked the employee. She laughed and said no. Well, that's good.

Of course I forgot my lunch that day. Why do I always forget it on a speed workout day? I zipped over to Subway and got a foot long turkey sub with double meat. I ate half of it at lunch and the other half 20 minutes later. I also had two dinners. After my "real" dinner I had a bowl of spaghetti. I was RAVENOUS!

Friday- Fridays are normally a lifting day but I didn't feel like lifting. Normally I suck it up and do what I'm supposed to, but instead I ran 5 miles around my hood. I am probably going to pay BIG TIME for this tomorrow when I have a 9 mile race pace run and have trouble hitting my marks due to not taking my scheduled rest day. If tomorrow is tough, it's my own fault. I purposefully tried to run this slow as it should have been a recovery run. My splits were ALL over the place...

I swear I felt like I was running the same speed the whole time.

So, when am I going to fit in this lifting session I skipped on Friday?? Maybe Sunday. We are supposed to get snow. AUGH!!!!!

How were your workouts this week?


Are you training for anything?
Posted by Meg Go Run at 5:30 AM