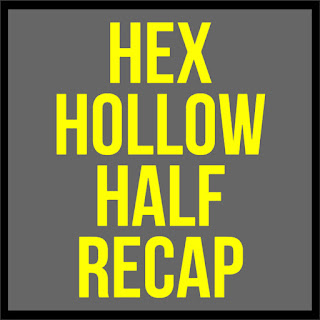 On Sunday morning, my dad and I ran the Hex Hollow Half in Spring Valley Park. (It was two loops, so there was also a 6.6 option.) I never heard of this park even though it was only 42 minutes away. My friend Kim alerted me to the race and we both signed up with the intention to run together. Unfortunately, due to the snowstorm we got the weekend of the race, it was postponed and Kim was unable to run it on the rescheduled date. But perhaps Kim and I can run it together next year!

The good news is my dad had also signed up for the race and we got to run it together! We weren't sure of our race plan other than we were going to start together and see what happened. We ended up running together the whole time, mainly due to the fact we got LOST around mile 2! I know, that's a little early to get lost, right? I'll get to that... 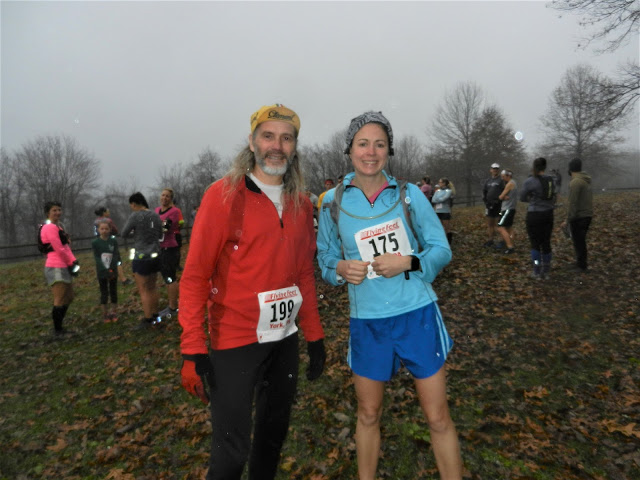 At the start of the race, I saw a bunch of my running pals, including Allison and her daughter, Kendall. This would be Kendall's longest race and they ended up finishing in an hour and sixteen minutes! (Allison and Kendall did one loop, which was about 6.6 miles.) Super awesome job, Kendall! 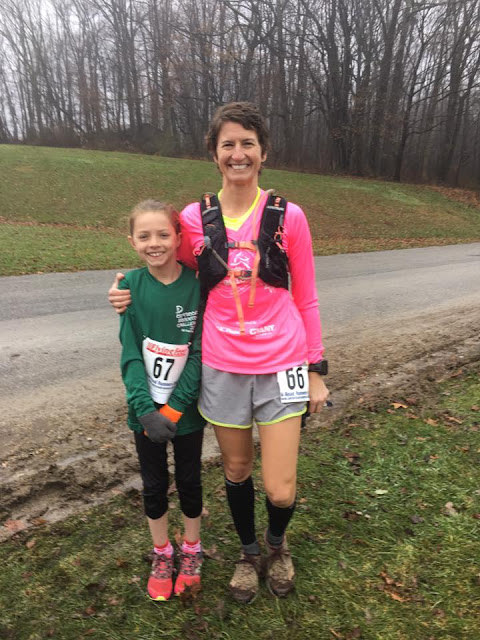 I try to start toward the front of the pack during trail races. If I don't, I am stuck trying to weave in and out of slower runners and waste a lot of energy. I assured my dad we were starting at the right spot and off we went! 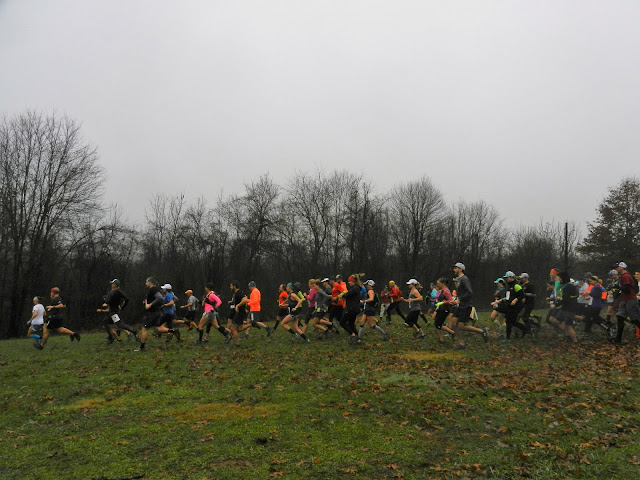 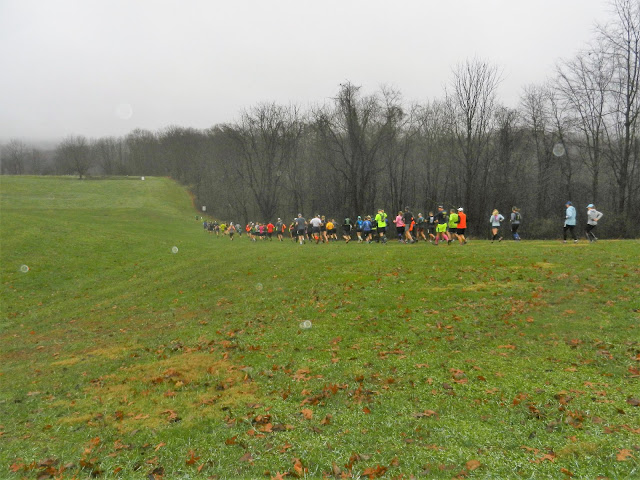 I would not call this course technical, but the conditions were wet, there were leaves, and there was lots of mud. However, there were not any parts we needed to walk due to rocks or roots or anything like that, which is why I wouldn't call it technical. This was not a flat course, but I wouldn't call it "hilly" either. I'd call it "rolling" with 3-4 hills that we walked up because it just made sense energy wise. You know those hills you can walk up almost as fast as you can run up them? That's what I'm talking about.

My dad and I passed a bunch of people in the beginning and were moving at a nice clip. I didn't know if we would be able to keep that pace for 13 miles, but I was feeling good.

Unfortunately, around mile 2, we made a wrong turn. We didn't know we made a wrong turn... I was just following the footsteps of the people in front of me. We ran down a steep hill and got to a dirt road. There was a gate with orange ties on it. We assumed these were course markers. We ran through the gates and then made a left hand turn because we saw more flags up ahead. We got back on a trail, but it wasn't long until my dad and the guys behind us noticed that this was a trail we had already run on!

I yelled to the dude in front of me, "We have to turn around!!!!" He yelled back, "I see flags!" and kept going. Well of course he saw flags. It was the course, it was just part of the course we already ran!

My dad and I back tracked and so did the group of guys behind us. (We had passed them but it was after they made that wrong turn!). We stood around for awhile and tried to figure out where we had gone wrong. No one else came barreling down the hill behind us, so we were the only group that messed up! Eventually, we decided to climb back up the hill and we realized where we went wrong. We ran an extra mile and wasted another 5 minutes or so trying to figure out where we went wrong. This really affected my dad and I mentally! We hadn't even hit the first aid station!

I got the feeling my dad was more bummed about this than I was. It was a small race, so we were literally IN LAST PLACE at this point. We were just running for fun, but it sucked that we had been doing so well and then BOOM we were behind everyone.

Eventually, started to pass some people. They thought we were on our second lap. "Nope, we just took a wrong turn!" we told them.

Finaaaaaaaaaaaaaaaaaaally we emerged from the woods and into the field we started in. We saw the aid station up ahead that was manned by none other than MY MOM! I don't know how she got that job, but she did! Here are some pictures she took as we approached... 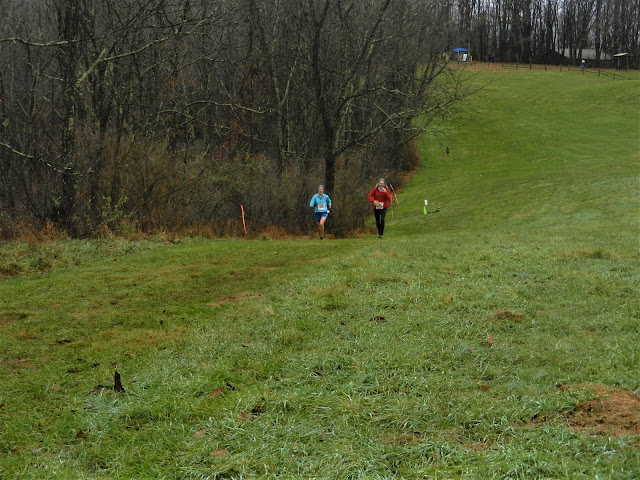 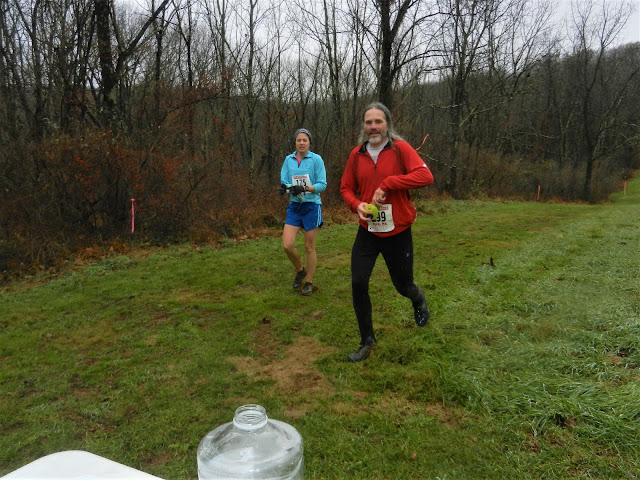 I took a couple pictures because I thought it was so funny my mom was manning the aid station! 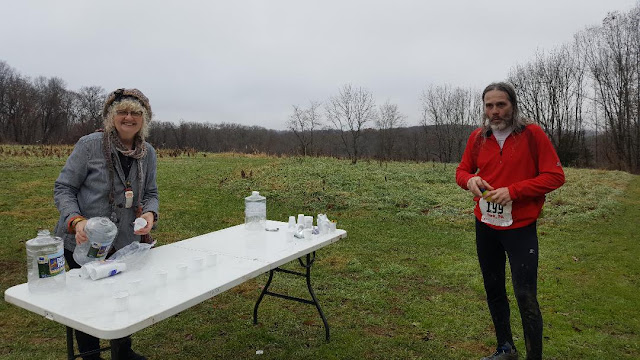 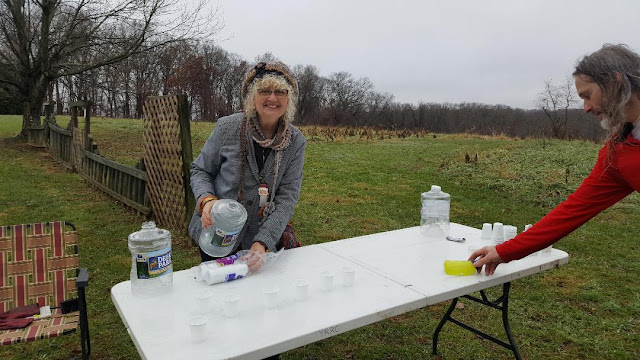 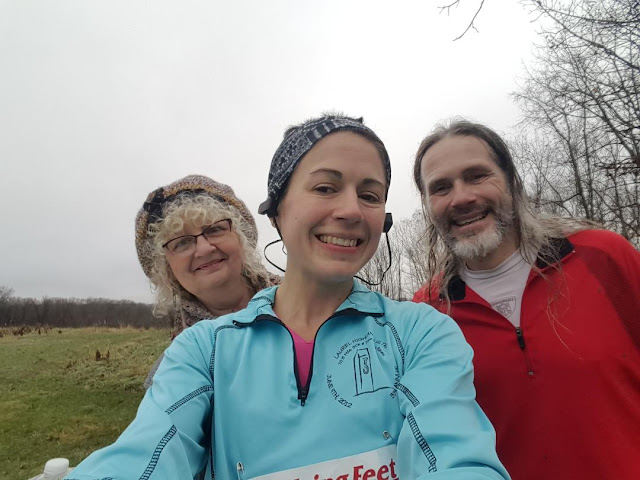 The last loop flew by so much faster than the first loop! It's crazy what a difference just one mile could make! My dad was getting tired. I was feeling good until about mile 10 when my back started hurting and then my hip flexors as well. (That's related to my back troubles so it made sense.)

But we chugged on and continued to pass a lot of people who were hiking at this point. We only passed a couple runners. Everyone else had either done only one loop or had gained so much distance on us when we were lost that we were unable to catch them.

When we had about 2 miles left, we were SO READY to be done! We were relieved to emerge into the field one last time and run toward the finish line. A dude up there yelled, "Go Megan!" but I have no idea who it was! Some dude with a beard... Who was it!? It's a mystery!

We finished in 2:49:XX. Omg that's the longest half marathon I ever ran! The post race food was AMAZING! Tons of subs, pizza, chili, baked potatoes, and huge cookies from Sheetz! We loaded up on food and then met my mom at the car. I can't believe she waited for us that whole time! 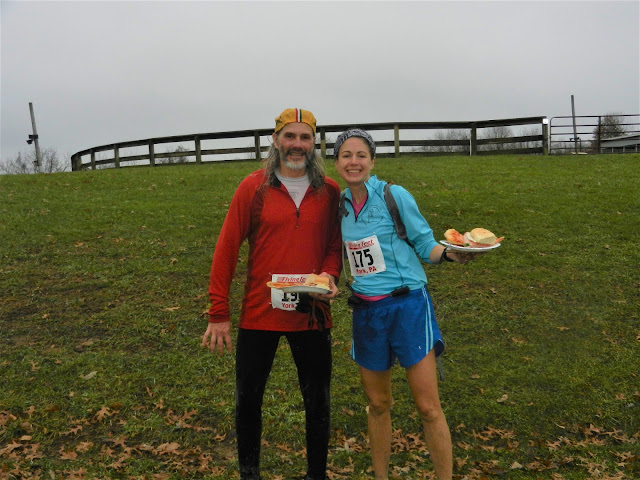 All in all, the Hex Hollow Half was a fun adventure, a pretty course, and it had awesome post race food. The aid stations only had water, but that didn't bother me because that's all I drink and I don't really eat during a race of this duration.

The best part of the race is that I got to run the whole thing with my Daddio. How many daughters get to do that? Running is a gift, and running with your dad is an even greater gift! I consider myself very lucky to have such an adventure with my dad!

Did you ever make a wrong turn or get lost on a race course?
Posted by Meg Go Run at 5:30 AM