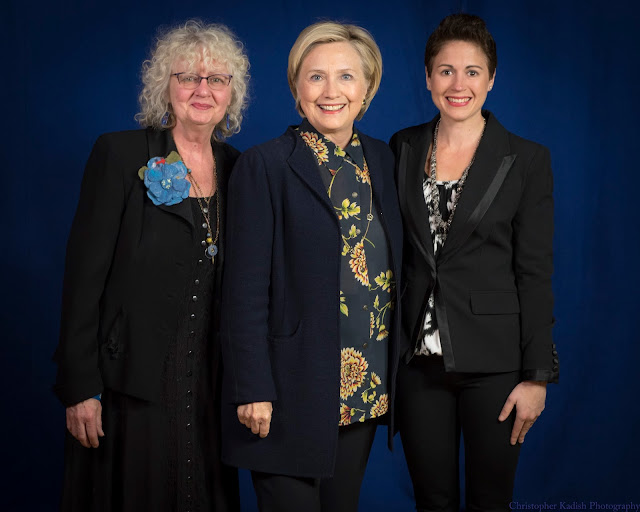 On Thursday, November 30th, my mom and I traveled to Philadelphia to see Hillary Clinton speak at the Academy of Music. Because I purchased tickets right when they went on sale, I was able to get us the VIP package which included:

I invited my mom to come with me because I know she admires Hillary just as much as I do. She saw her speak on the campaign trail last fall but never met her.

Leading up to the big day, I had two important decisions to make:

I ended up wearing black flats, tight black dress leggings, and a black and white tank with my black blazer over top. It was basically the pantsuit I wore to vote for her last November! I slicked my hair up in the most perfect faux hawk, put on some silver jewelry (included my feminist ring) and voila! My "Meeting Hillary Clinton" outfit was perfect.

I didn't decide exactly what I would say to Hillary until I saw her in person. When I saw her, it just came out! (More on that soon!)

It only takes 2 hours to get to downtown Philly from my house. We hit the normal city congestion as we approached the parking garage. (I reserved a space for us just around the block from the theater and it turned out to be very convenient.)

We had three hours to spare before it was time to check in. First, we walked to the venue, just so we knew exactly where we needed to be. From the venue, we could see City Hall. We walked toward it and figured we'd just sight see for a little bit. 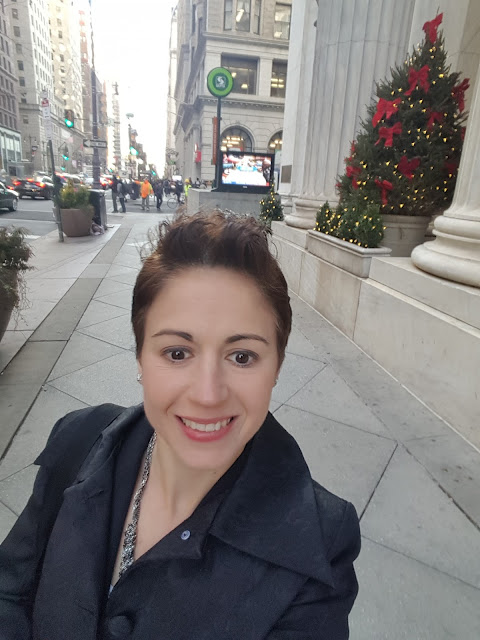 Guess what my mom spotted? A craft show! We couldn't believe it! There was quite a big craft show set up around City Hall and across the street. My mom forgot to put on earrings that morning, so we walked through the craft show for looking for a pair. She ended up finding some cool purple ones! 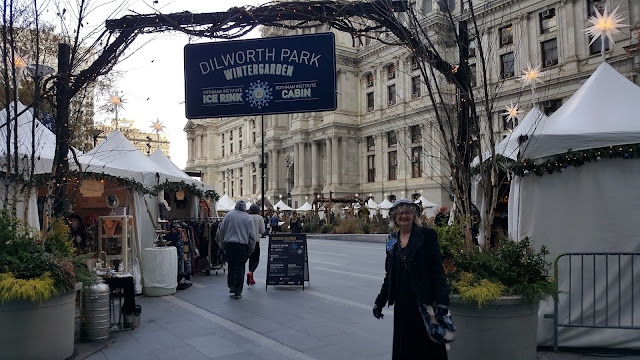 After wandering around the craft show, we found a little pub and sat down to eat. I was hungry but my stomach was too nervous to eat much!

At 5:15, we joined the line of fellow VIP ticket holders outside the Academy of Music. We took some pics in line... 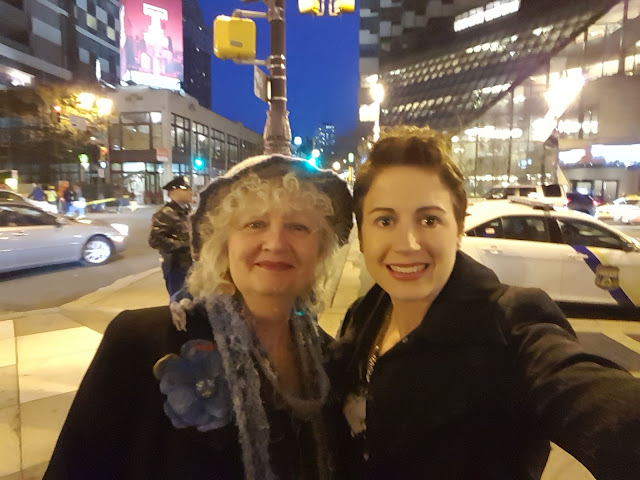 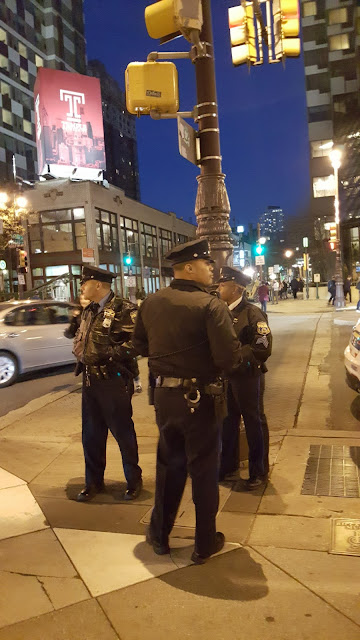 There were lots of police and they weren't allowing anyone to loiter in front of the theater. 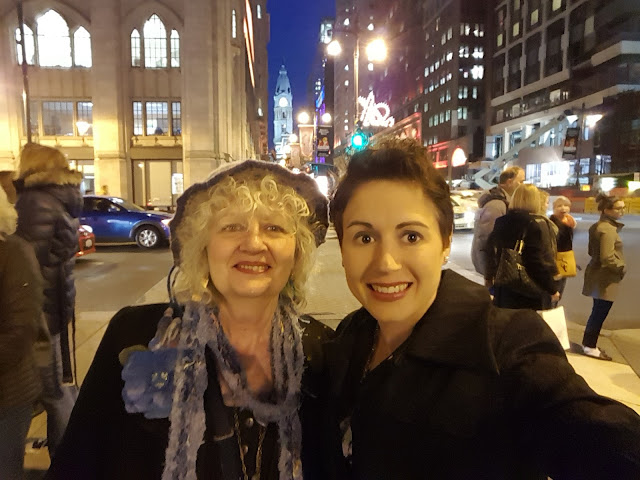 Around 5:45, they let us in. We had to show our ticket, ID, have our bags searched, and do the metal detection thing. (Before the big day, we had to fill out a security form online so we could be vetted and cleared to meet Hillary.)

Next we were directed to the "green room" which was actually on the stage but behind the curtain. There were ropes up for us to just stand and wait in line. Behind another curtain we could see lights. The actual meet and greet would be behind the curtain and that they would take us in a couple at a time.

Here are some pics we took backstage while in line... 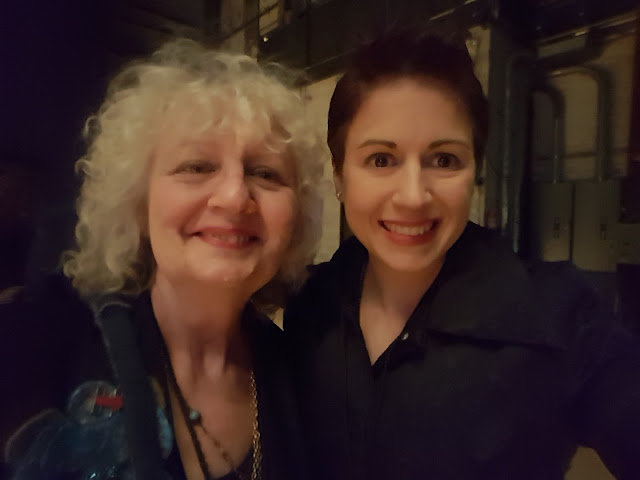 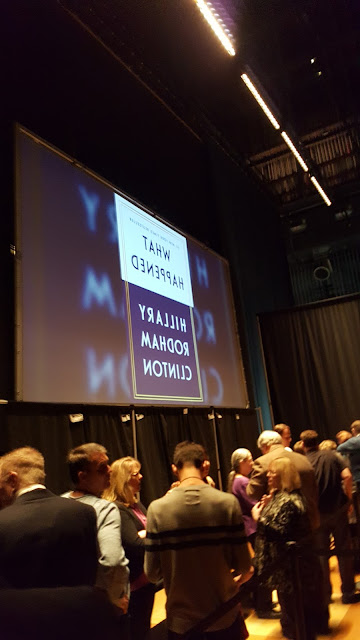 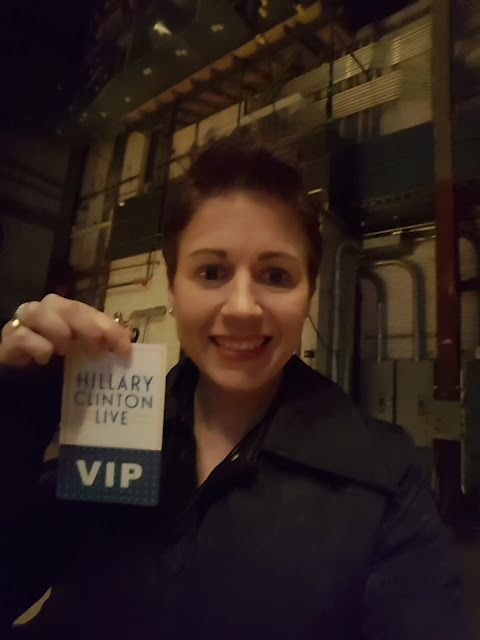 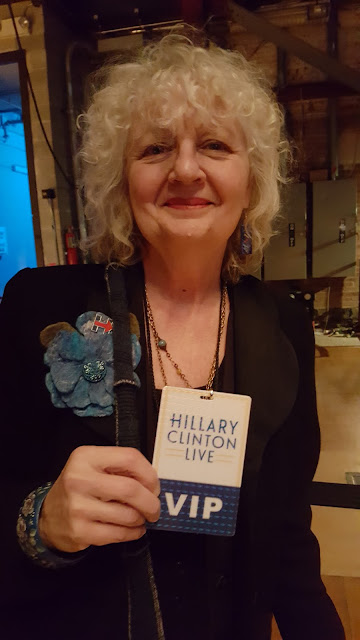 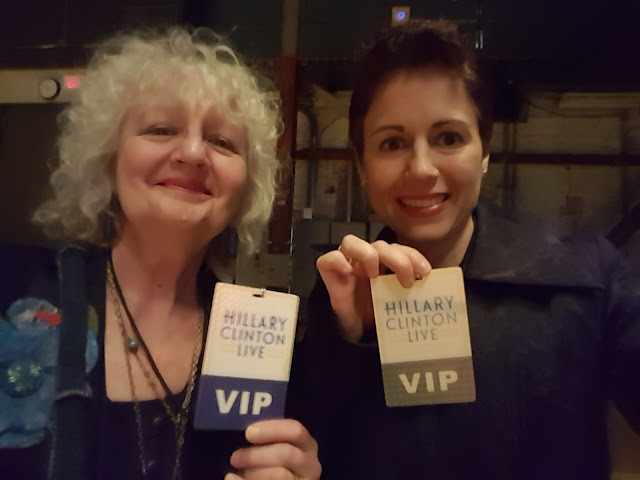 Obviously there was a lot of nervous energy. I can't remember a time I had so much anxiety for something! It didn't help that we stood there for about an hour and a half until they finally started the meet and greet! My back was hurting A LOT from just standing.

Finally, the meet and greet started. We could tell by how the line was moving that this was going to be a QUICK meet and greet. My mom and I determined there was probably enough time to say "hello" and maybe one sentence. When you got closer to the front, you were allowed behind the curtain, and there she was. Hillary Clinton, standing about 10 feet away from us!

Guys, Hillary looked BEAUTIFUL. Elegant is another word I would use to describe her. She looked presidential and poised. She looked exactly like she looks on television, except shorter and thinner than I imagined.

She was greeting her fans and then there was a picture. Some people just said hello and had a handshake. Other people stood and talked a little longer. Hillary listened intently. One man had tears in his eyes while he talked to her. She talked quietly with a young man who was about sixteen. She gave each person her full attention during the very short time together.

Meeting Hillary was such a whirlwind! My mom went up to her first. Hillary held out her hand and shook it. My mom introduced herself and then moved to the other side of her for the picture, as directed. Then it was my turn. Hillary shook my hand and looked me directly in my eye with a smile. I said, "Hello, my name is Megan. You are beautiful." Hillary said thank you. "I admire you so much," I said. Again, she thanked me with her radiant smile. Then we turned for our picture. My mom thanked her and Hillary told my mom, "I'm glad you came." Then she turned to me one more time. "It was an honor to vote for you... twice!" I said. She laughed and thanked me. Then off we went, directed to leave the meet and greet area. We were so giddy!

We were probably in the meet and greet area a total of 6 minutes. Our interaction with Hillary was 30-45 seconds. I know that sounds so fast, and it was! It really was a whirlwind. But she was lovely to everyone who came to meet her.

A couple more things... Her right foot was in a boot because she broke one of the toes while she was overseas. That's what one of her security members told us. As a runner, I felt devastated for her when I saw her in a boot! That would be terrible, and I felt bad that she had to stand for so long in that thing.

There were secret service/security dudes lined up behind us watching like hawks. It was actually pretty cool to see! During the show, they were all over the theater and even on the stage. They were alert at all times.

After the meet and greet we were given our autographed book and we found our seats... which were literally in the third row! On the stage was a book shelf full of her books and two armchairs. 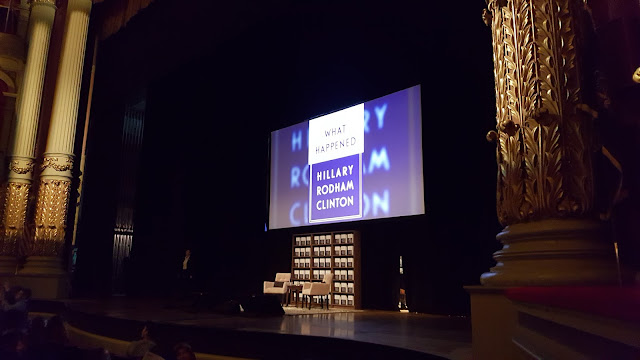 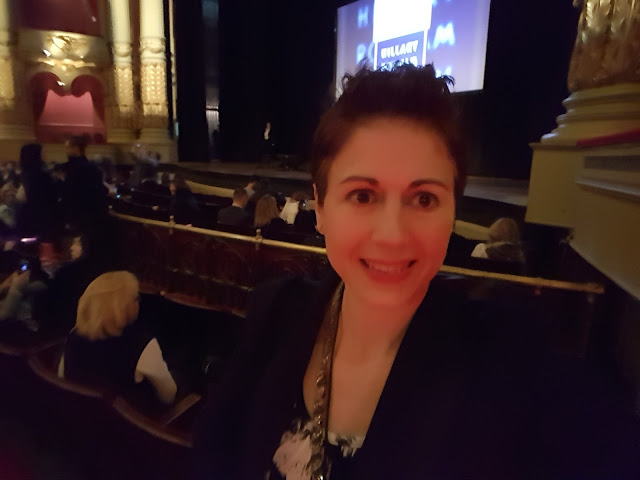 The theater was GORGEOUS!!!! 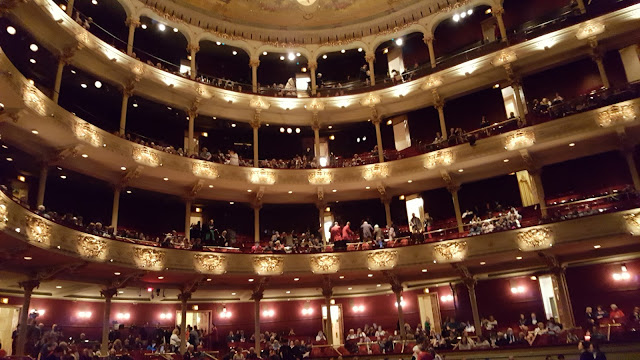 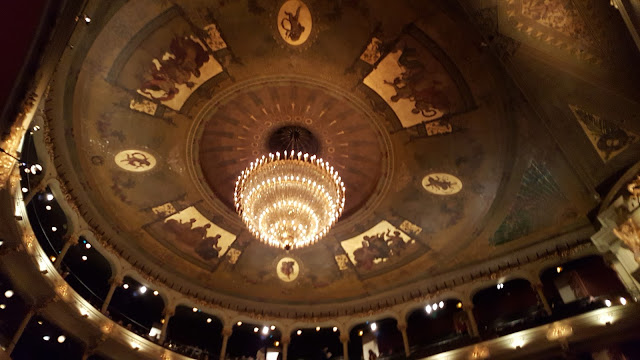 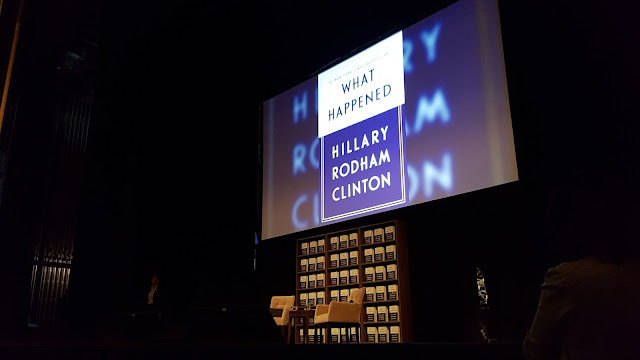 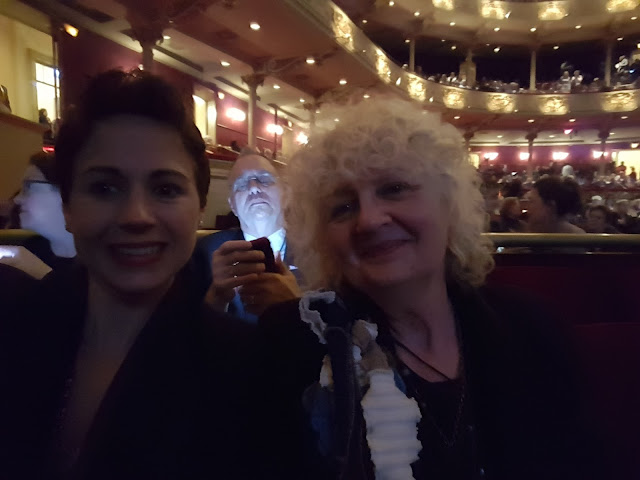 At 7:55, author Jennifer Wiener came out to moderate and introduce Hillary Clinton. 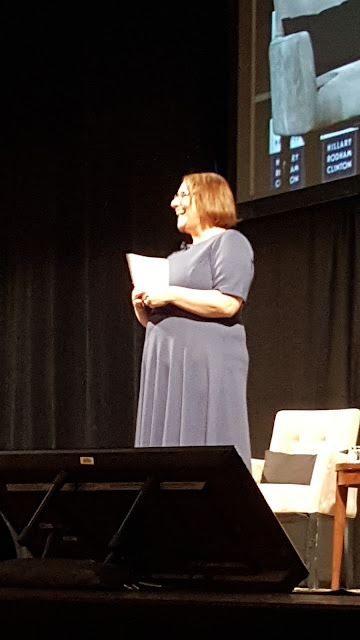 We could see Hillary in the wings waiting to come onstage. 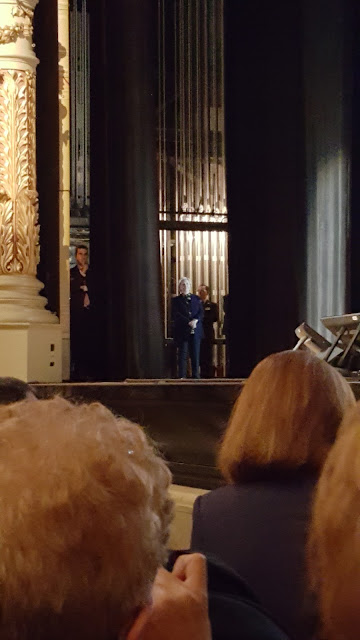 Hillary got a VERY LONG standing ovation when she took the stage. After all, she was in pleasant company! For the first half of the show, Hillary told stories from her book and outlined the things that went wrong in the 2016 election. She was in a good mood, funny, but gravely serious on certain topics. There were many times her statements were met by applause and cheers. The second half of the show was more of a back and forth with Jennifer asking Hillary questions or responding to topics. 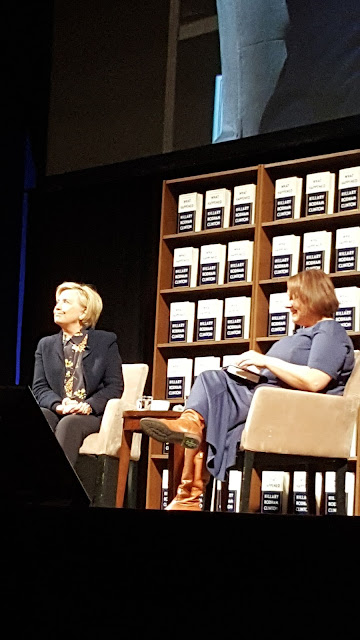 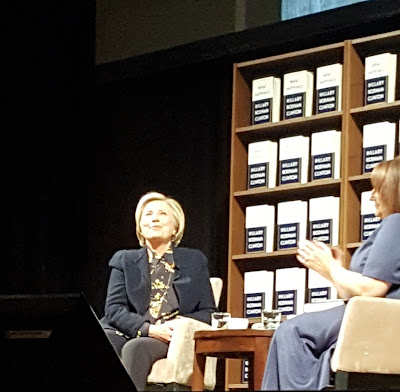 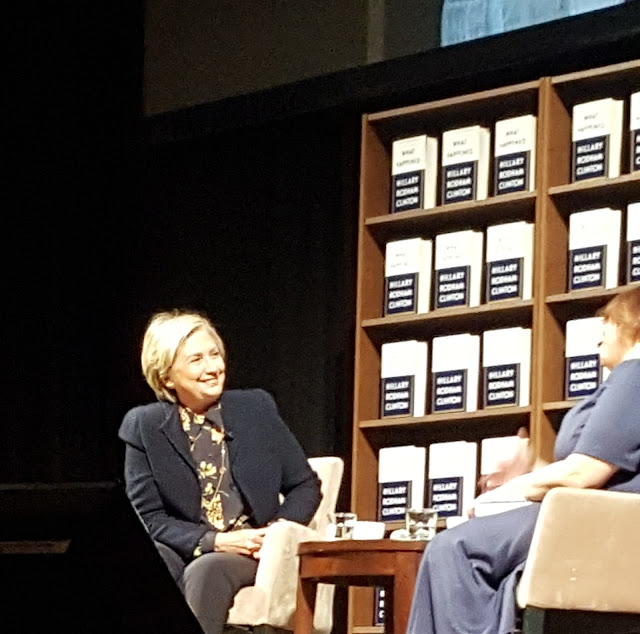 My mom sent me two articles that cover the event that night. If you want to hear more details of what she talked about and see better pictures, check out the articles:

Philly Voice: Hillary Clinton returns to Philly to talk election, her book and the way forward

The entire show was very engaging and I wasn't bored at all. It was fascinating to see her speak in person. Hillary is SO FREAKING SMART. She would have made an excellent president. Instead we have a racist buffoon who is literally losing his mind in front of the entire world.

When Jennifer said it was time for one last question. That's when a man in one of the balconies stood up and started screaming, "Tell us about Pizza-gate!" He would not stop shouting and security removed him.

If you don't know what pizza-gate is, it's an online conspiracy theory that Hillary and John Podesta were operating a child trafficking ring in the basement of a popular DC pizzeria. Yup, people actually believed that crap. A crazy guy from NC drove up to DC with an AR-15 and opened fire at the pizzeria because he thought he could save the children in the basement. (The pizzeria doesn't have a basement.)

After the heckler was removed from the audience, Hillary said "This is how deep the rot goes." She got angry. Conspiracy theories have big consequences. Can't we all agree on facts anymore?

Luckily, they didn't end on that note, and Jennifer asked Hillary a lightening round of lighthearted questions to end the show. It was over at 9:20, so the whole thing was about an hour and a half.

The show was WONDERFUL and we really enjoyed it. My mom and I agreed that coming all the way to Philly and spending money on VIP tickets was so worth it! This was a once in a lifetime opportunity for us! We were giddy and talked the whole way home.

I was so thankful to spend the day with my momma! And I am so thankful to have had the opportunity to meet Hillary- someone I admire very much and supported wholeheartedly in the 2016 election. It was such an honor to meet her and express my admiration.

If you could meet any political figure (dead or alive) who would it be?
Posted by Meg Go Run at 5:30 AM