NYC with my Honey to see Colby!

Hola peeps! I'm going to interrupt my vacation recaps to tell you about a little day trip Paul and I took on Monday! We drove up to NYC to see the Stephen Colbert Show!

Paul and I love Colbert and we DVR him every night. We always watch his monologue. As far as other segments and celebrity interviews, we watch what interests us and fast forward the rest. Colbert makes us laugh so hard, and he has become one of those shows that feels "homey" to us.

HOW I GOT TICKETS:

One night a couple months ago, I simply googled, "Stephen Colbert tickets" and it took me here. That's where you can choose the date you want to request tickets for. (When typing up this post, I checked it and looks like all the dates listed are sold out, but don't let that deter you. Keep checking back, because the two times I checked to get my tickets, they weren't sold out!)

After you request the date, you can reserve up to 4 tickets I believe. At that point you are considered on the waiting list and they email you when you are on the "priority" list. That means you have tickets for the show.

We had tickets for a show back in June, but the taping got cancelled. (They let us know about a week ahead of time.) So I reserved tickets again and got them for the 5:30 taping on July 31st. This taping was not cancelled and it was the one we ended up attending!

RECAP OF OUR DAY:

NYC is only a 3 hour drive away, so we left Camp Hill at 10:00. We didn't hit any traffic on the way there, not even outside the Lincoln Tunnel. I think it helped that we got to the tunnel around 1:45, a relatively slow time.

I reserved a spot in a parking garage less than half a mile from the theater. It was $50 to park, which is a lot, but it was much cheaper than taking the train. 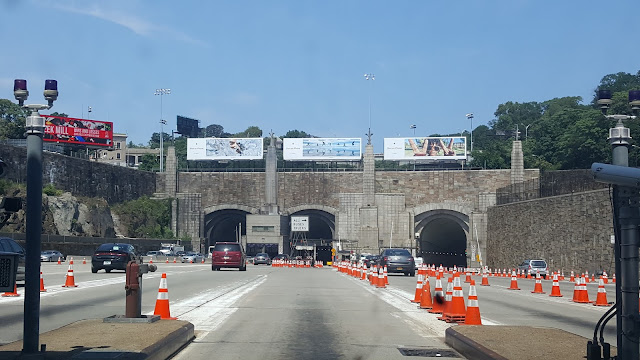 I know what you're thinking... you DROVE in NYC? Yes! I have driven in NYC several times and it honestly doesn't bother me, as long as I have Paul to help navigate! I just take my time, and if anyone gets mad about that, they can just fuck off! That's my NYC driving philosophy: FUCK OFF! 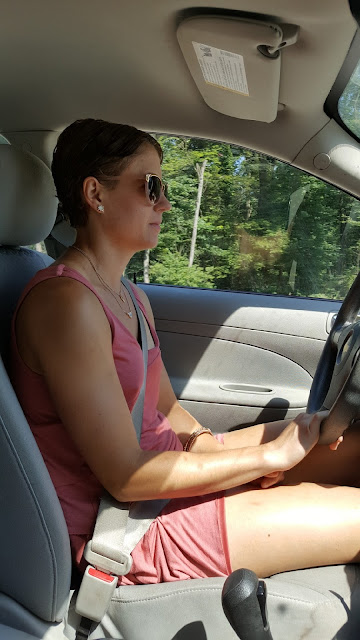 When we got to the Ed Sullivan Theater around 2:45, there was already a line. I showed one of the audience coordinators our tickets and our IDs. They gave us a wristband and told us we'd be getting inside shortly. I thought they were lying, but they weren't. We really did get inside about 20 minutes later! It was a process though. There were metal detectors and dogs! 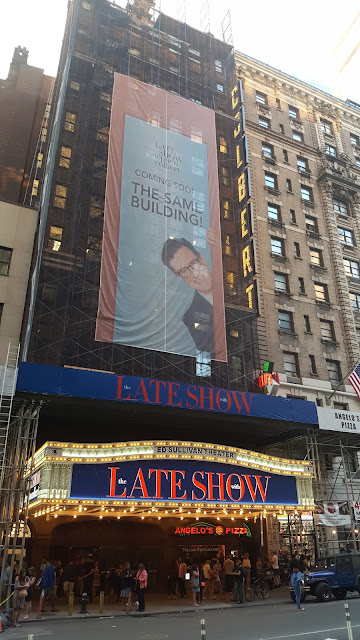 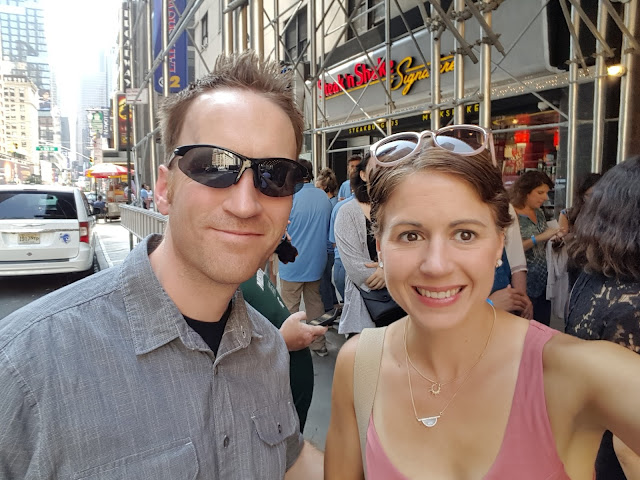 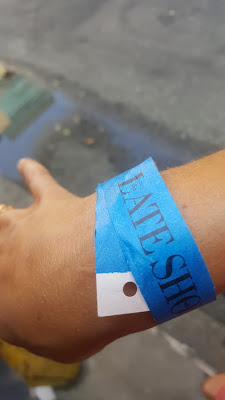 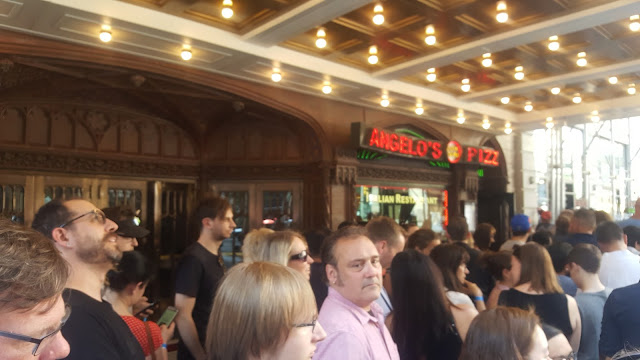 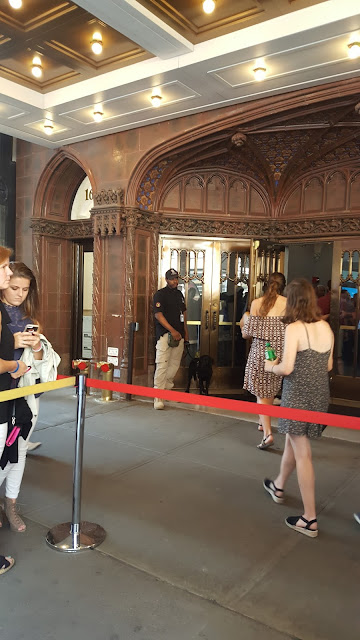 Unfortunately, once we were inside, there was more standing and waiting. But at least now we were in air conditioning... and there were TVs for us to watch some highlights from Colbert! 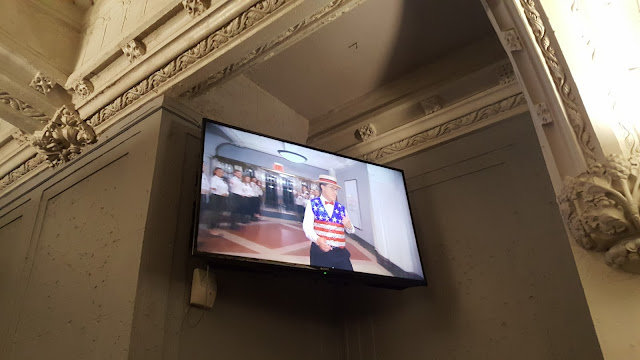 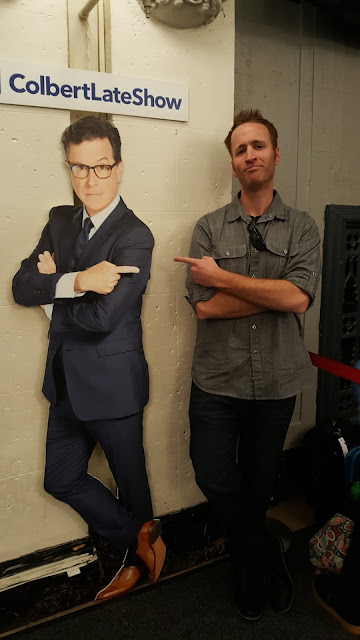 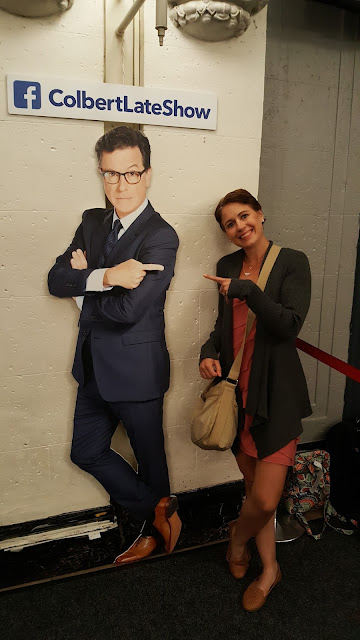 A little after 4:00, they began letting us into the theater. The theater is very small. There were only 11 rows on the floor! (Not sure about the balcony as we were not up there.) Seeing the Colbert set was SO FREAKING COOL. It was weird... it was like we were in our television or something! Soon, the warm up guy, Paul Mecurio came out. He did the normal audience warm up type things and interviewed/made fun of some audience members. It was all in good fun. Then, before we knew it JON BATISTE AND STAY HUMAN (the resident house band) came out and treated us to a free mini concert!

As much as Jon Batiste annoys me with his random hooting and hollering during the show, he is an AMAZING musician and I like him as a person. I could just do without all the hooting you always hear on TV!

Then Stephen came out! IT WAS SO FREAKING SURREAL WHEN HE RAN ONTO STAGE!!! They didn't even announce him, he just ran on while the band was playing. The crowd went nuts. My ears were ringing!

Stephen did a quick Q&A with the audience, and then before we knew it, it was time to tape the show!

Now you're probably wondering, WHERE ARE ALL OF THE PICTURES, MEGAN? Well, the audience coordinators were very clear that there should be NO CELL PHONE USAGE while in the theater. No pictures, video, calls, texts, NOTHING. Don't even get it OUT. And you know me, I'm a rule follower! I didn't see anyone get their phones out, so it seemed like everyone was following the rules.

The following pictures I am going to post are pictures of my television screen at home! The show we watched being filmed was aired (except for a couple segments I will tell you about later) that night. Of course we DVR'ed it and YES we can see ourselves in some of the audience footage! 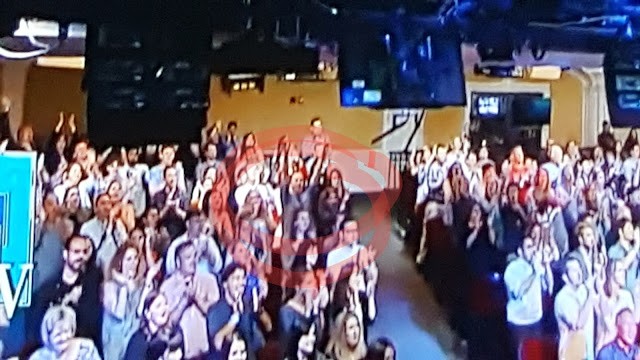 I circled us. Very fuzzy! 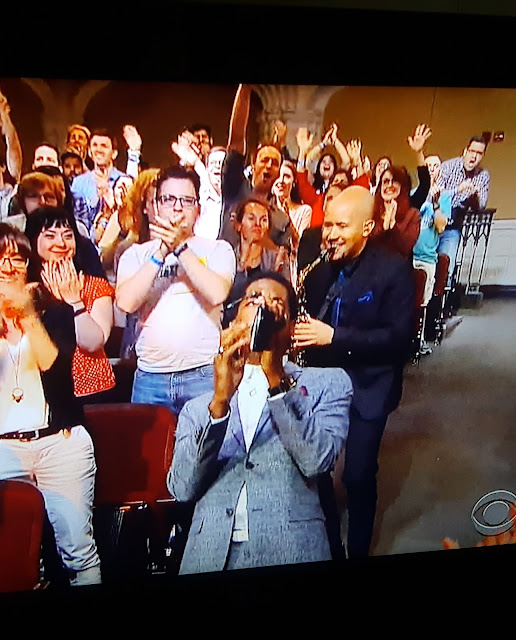 Do you see Paul!? 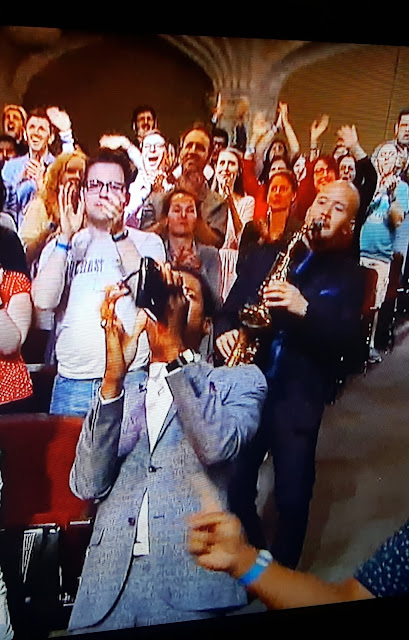 Here you can see us both!

First up was the monologue, which is my favorite part of the show. It was so surreal to see THE Stephen Colbert, just 20 feet in front of us, doing his monologue! 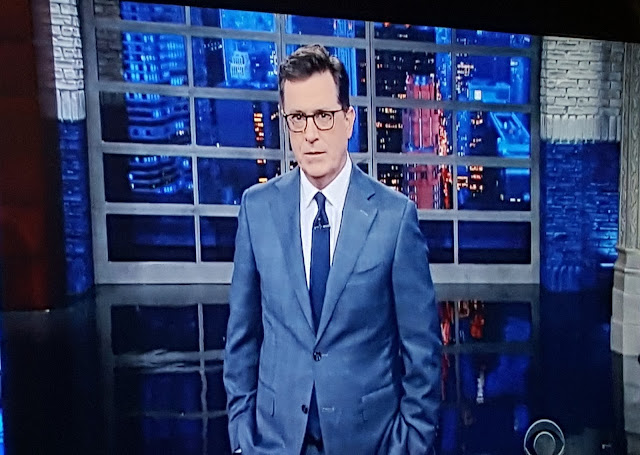 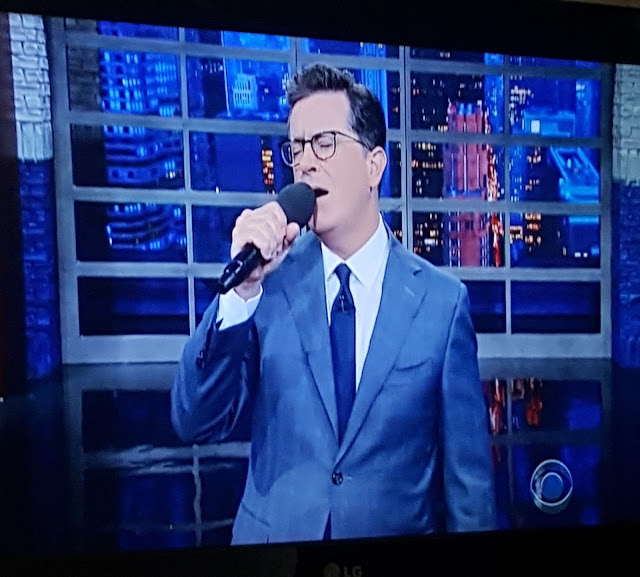 He sang a parody of Bohemian Rhapsody due to the firing of THE MOOCH.

Then there was about a 5-10 minute break. Stephen sat at his desk and a young guy sat next to him to go over the next segment. (I assume.) During the breaks, Jon Batiste and Stay Human would rock it out. They even came down into the audience. Jon Batiste jammed out on his Melodica RIGHT BESIDE ME.

The first guest was Matthew McConaughey. Now, this would excite most women, but I have always DESPISED McConaughey! He is SWARMY and he thinks his shit doesn't stink. I really want to inform him that his shit, indeed, DOES stink! 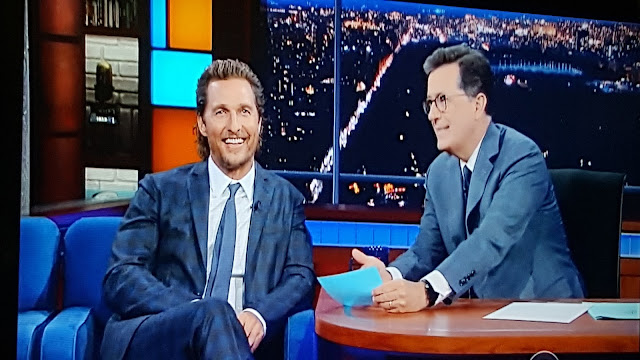 The McConaughey interview was pretty long, and then during the next break, they rolled in a little office set onto the stage so Colbert and McConaughey could do a skit together. I'm sure I would've enjoyed the skit more if I liked McConaughey! But the audience really liked the skit. Honestly, this is something Paul and I would have fast forwarded at home! 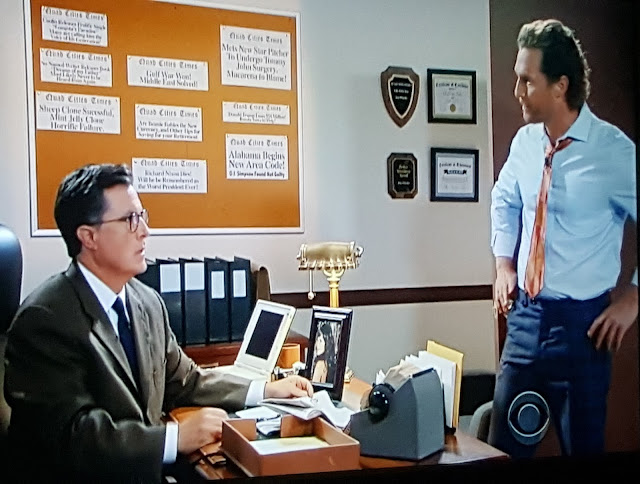 The next guest was Vanessa Bayer from SNL. Even though we don't watch SNL regularly, I knew who she was and it was a fun interview. 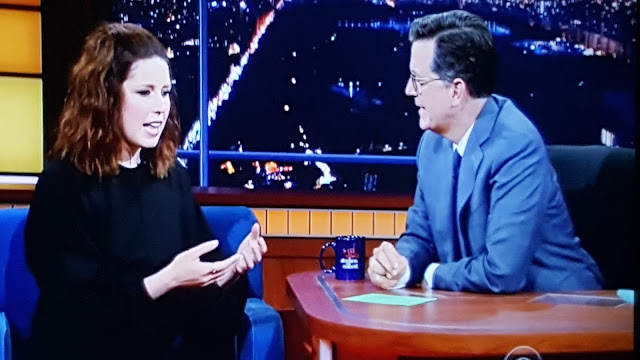 At this point, we thought the show was over, but while the camera wasn't rolling, Stephen informed us that we were in for a HUGE treat because they were taping a segment that would be airing later in the month. Who could it be!!?? I kept hoping for Hillary Clinton!!!! It was not Hillary buuuuut it waaaas....

I looked at Paul and he had freaking TEARS in his eyes when Chapelle came out! I was sooooooo happy for Paul. So freaking happy for him!

The Chapelle interview wasn't long but it was really funny! He is doing a bunch of shows at Radio City Music Hall, so that's what he was promoting.

After that, Stephen informed us again that we were in for a treat because Liam Gallagher (formally of Oasis) was there to perform two songs for us! They would be aired in a future episode. Now, I'm not a Liam Gallagher fan but Paul is! Again, he was sooooo happy!

One thing I was impressed about was that EVERYTHING was done in one take, and also everything moved along very fast. There was no dilly dallying on the set.


Another thing I wanted to mention was how freaking LOUD it was in the theater. When the audience was cheering, my ears were ringing. I actually wished I had ear plugs. The band was really loud too- louder than any concert I had ever been to. The next day, while I was watching TV, my right ear started making like a jack hammer sound. It happened for about 30 seconds and then stopped...

And with that, the extra long show was over! We left the theater in a daze. It was 7:19 already! Wow, time flew! 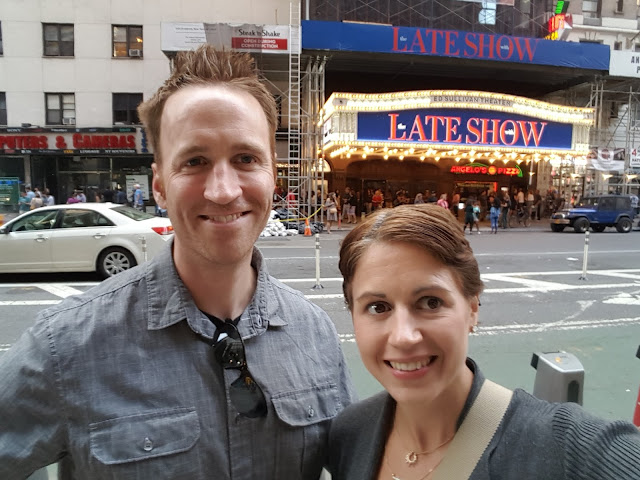 We had no problems getting out of the city or getting home. We rolled up to our house a little after 11:00 to two kitties who missed their mommy and daddy!

It was a very quick, whirlwind trip, but I'm so glad we went! We love Colbert, and being there was even cooler than we ever could have imagined!

Do you watch any late night shows? Which are your favorite?

Did you ever attend a taping of a TV show? (I saw The View twice and I was even on it!)

If you could spend the day in NYC, what would you do?