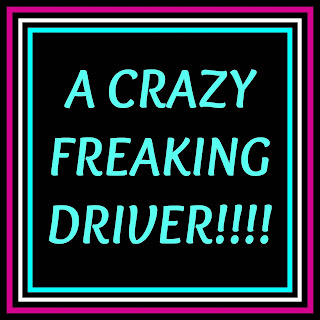 On Sunday evening, Paul and I were driving home from Cape May and we were on the PA Turnpike. Just a couple miles after I got on, I found myself driving behind a teal mini van. The van was fluctuating it's speed... going anywhere between 60-70 mph. It was really annoying. We had over 90 miles to go on the turnpike and I didn't want to have to pay super close attention to the car in front of me. I just wanted to cruise along at like 72 mph. (Speed limit was 70.)

When I tried to pass on the left, the minivan sped up. I hate when people do that! I only looked at the car out of the corner of my eye. (I didn't want the driver to know I was looking.) There was a woman driving (could have been anywhere between 30-45 years old) and a flag hung on the rear view mirror. It had stripes and I remember the colors red, green, white, and yellow. (I know that doesn't make sense. There were only 3 stripes. One of those colors I made up...) There was a passenger, but I didn't get a good look.

I was able to pass the minivan and go on my merry way, but about 5 minutes later, she sped up and passed me. For a minute or so, she sped ahead of me, but then she started fluctuating her speed again. I was REALLY pissed. I had done so much driving the past couple days, I just wanted to get HOME.

I passed her again and I got pretty far ahead. Other cars passed her too. There was a lot of space and a lot of cars between the teal minivan and us. We couldn't even see her anymore, so we thought that was the end of it.

But then there was a straightaway... and she freaking FLOORED IT and went like 85 past several cars, caught up to us, and when she decided to merge in front of us, she CUT US OFF, and it was the kind of cut off where I had to break so that she wouldn't hit us! I slammed on my horn to warn her of the danger!

"WE NEED TO REPORT HER AS AN AGGRESSIVE DRIVER," I told Paul. The van then sped up and I couldn't get her license plate... and at this point we were scared to get close to her!

Paul didn't want to call 911 until we had a license plate. But 10 min later she almost caused an accident up ahead by cutting someone else off. It was a REALLY CLOSE CALL. I saw the car slam on it's brakes. I really thought we were going to witness a bad accident.

At this point I thought we had to call whether we had a license plate number. Paul didn't want to because he didn't think there was anything the police could do without a plate. We had a little quarrel about it. Luckily, at that point the minivan was so far ahead and we didn't see her again. But I was convinced at some point we would come upon an accident involving her!

Do you think that woman was doing it on purpose or was there something wrong with her and she didn't realize what she was doing?

Would you have reported the driver without a license plate number available?

What is the protocol to report aggressive drivers? We called 911 before when a pick up truck purposefully cut us off and almost killed us on 83, but there weren't any officers around so they couldn't do anything. We had a plate number that time.
Posted by Meg Go Run at 4:21 AM