I found a fascinating case to research! It's not a new case as it happened a little over a year ago, but this is the first time I'm really diving into researching it.

Unfortunately, it seems as if the case has stalled!

Missy Bevers was a wife, mother of three daughters, and worked as a fitness instructor in a fairly small town in Texas. She was very active on Facebook advertising her fitness classes. She taught a morning Camp Gladiator class outside Creekside Church in Midlothian, Texas. 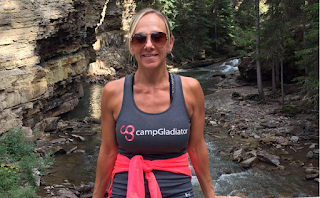 The night before her murder, Missy informed her students via a Facebook post that she was moving the Camp Gladiator class to inside the church due to the fact that it was going to rain.

There is a lot to set up for these Gladiator classes because Missy arrived at the church around 4:15am. (Cameras inside the church verified this.) Her body was found when her students arrived for class around 5:00am. Missy was bludgeoned to death in the head and chest with a hammer like instrument that was sharp. It is just so horrible that this happened to her.

Now, here is the creepy part... There is VIDEO FOOTAGE of the perpetrator inside of the church before Missy got there. In the video, you see the perp walking around, swinging the weapon, opening up doors, etc. The suspect is just sauntering around like they have no care in world....

It is impossible to tell who the suspect is because they are wearing what looks like SWAT gear, including a helmet. You can't even tell if they perp is male or female.

Investigators estimated the the suspect is between 5'7 and 5'10 tall. You can tell from the video that the perp is probably a little overweight. Another thing that is creepy is the very unique posture and gait the suspect has. When walking, their toes point outward, and it's kind of like their left leg is a little weaker than their right.

One thing I am wondering is if the camera footage filmed the actual murder of Missy. While the police have released some footage of the perp, I have not been able to see any footage of Missy. Obviously they can't release the video of her murder, but it may be too disturbing to even see video of her entering the church, unaware of what was about to happen.

It's crazy to me that police have not arrested anyone in this murder, yet! It is quite obvious this was not a random killing. Someone knew Missy would be there inside (due to rain) that morning. They knew there was not a silent alarm at the church but that there were cameras, so they needed to wear a costume to hide their identity. They didn't steal anything, but they killed Missy very violently. This was a personal attack. THIS WAS DONE BY SOMEONE MISSY KNEW. I am quite sure of that.

Obviously the first suspect is always the husband. Whether it's a happy marriage or not, women are normally killed by their husbands/boyfriends or exes. There is evidence that Missy was having at least two affairs. She and her husband were also having financial troubles. So there was stress in their marriage. However, the husband was in Mississippi and that has been investigated and confirmed by police. It is not her husband in the video.

The father-in-law is the next suspect. He has an interesting gait that appears similar to the person in the video. But to my mind, the walks are different as the FIL drags his right foot and the part drags their left foot. Not only that, but it has been proven the FIL was in California the day of the murder. It is not the FIL in the video. But could it be someone trying to impersonate the FIL? Who the heck knows.


There is one red herring, but I feel like I have to mention it. A couple days after the murder, Missy's FIL took a bloody XXL woman's shirt to the dry cleaner. He said it was blood from his dog who got into a fight. The blood was tested and it was indeed dog blood. I think the FIL is a weirdo. Wouldn't you throw that shirt out? I know if I had a shirt covered in my cat's blood, I would throw it away!

So husband and FIL are out of town. Could the person in the video be a WOMAN? Maybe it is the wife of one of the men Missy had an affair with? I am sure police are investigating everyone. If it's a woman, that is BEYOND CREEPY.

Another piece of evidence... A few days before her murder, Missy showed a friend a LinkedIn message from a male unknown to both of them. The friend told this info to the police and she told the police that she and Missy both thought the message was "creepy". Could this be related to the murder?

And one last piece of evidence that has recently emerged... There is a sporting goods store just down the road from the church. Apparently, a couple hours before the murder, a car pulled into the parking lot and drove around slowly. They turned the headlights on and off. Is this where the person changed into the SWAT gear? The sporting goods store released the video footage of the car, but unfortunately there is no way to see the licence plate number. Police don't think the car is related to the murder... but is it?


My hunch is... the husband and the father-in-law hired someone to kill Missy. I think it is TOO CONVENIENT that they were BOTH out of town on the day this happened.

Even though no one has been arrested yet, I do think they will eventually find the monster that murdered Missy.

If you want some more videos on this case, check out Nancy Grace Mysteries.

What do you think happened to Missy?
Did I miss anything important?
Posted by Meg Go Run at 5:30 AM