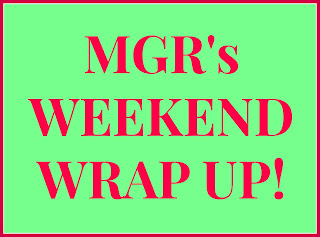 What a weekend!
I spent Fri-Sun at CRIMECON in Indianapolis!
Here's Day Three of my crime filled weekend....
Day One is here.
Day Two is here. 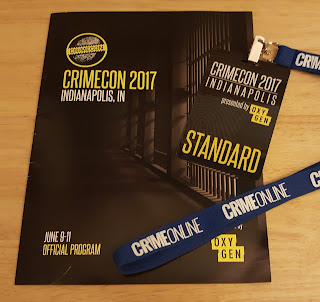 Once again, I got up super early on Sunday morning to workout before CrimeCon began. I grabbed a coffee and drank it during my workout. I know, not a good idea.

I planned to get on the arc trainer/elliptical looking machine in the hotel gym but it was SO WEIRD. I could not get a burn on it at all. It pissed me off. So I started lifting chest, did some burpees, and my PT exercises. I was so angry I couldn't get the burn I wanted so I ran a mile uphill on the treadmill. It felt SO GOOD to finally get the burn I so desired! 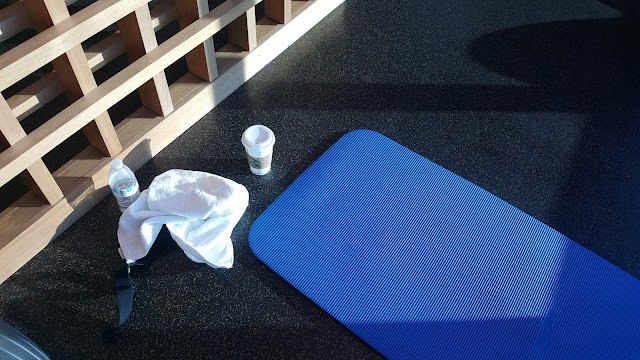 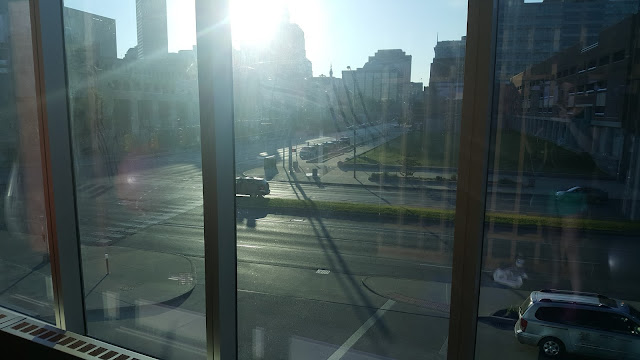 We only had three sessions to attend on Sunday morning and then the stress of traveling home. I got in line early for The Interrogation Experience and saved a spot for Claire. This was one of the top three sessions I wanted to go to and there was limited seating. Luckily we both got in and were sitting close to the front. 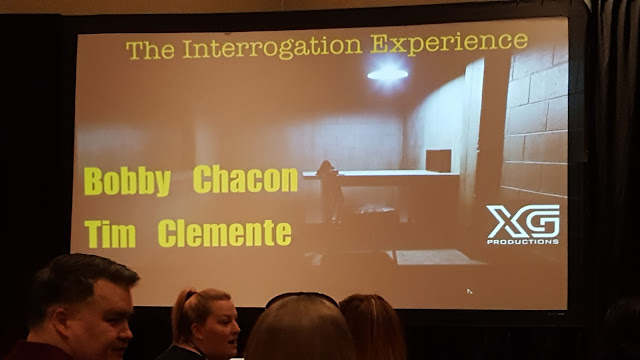 On the stage was a little interrogation table... 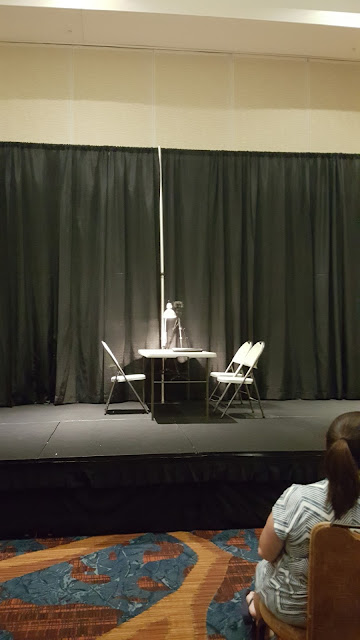 Then, Jim Clemente, Tim Clemente, and Bobby Chacon came onstage and welcomed us to the session. They asked us to please tweet and post pictures of the experience but to wait to post them until CrimeCon was over.

Then they got into talking about the difference between an interrogation and an interview. They weren't even 1 minute into their speech until all hell broke loose...

First, a man started recording the session on his phone, and one of the presenters (I forget who) asked him to stop. Then an argument broke out near the back of the room. There was a couple arguing about something and a police officer went over to calm them down.

"Do we need to get security in here?" one of the presenters asked.

AND THEN AN AIR HORN WENT OFF.

I seriously thought there was about to be a mass shooting and I was going to die.

There was shouting, but I don't remember what was said. Someone in a black ski mask and all black clothes ran right in front of me and down the row. That person picked up a young girl sitting on the last chair in the row, flung her over their shoulder, and ran out of the room with her. I remember seeing others in ski masks but I don't remember how many.

Then all the noise and commotion stopped and we all realized this was a "stunt" and started laughing.

One of the presenters said, "This session is not called The Interrogation Experience, it is called THE iWITNESS EXPERIENCE!!!!!"

We all started cheering!

Now, I only thought I was going to die for about 3 seconds. As soon as I saw the people in black ski masks, I knew it was "made up". But I was still shaking! I should have known something was going to go down because look at the sign we passed as we entered the room... 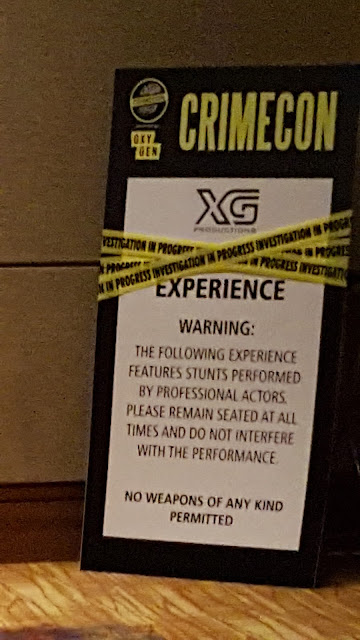 After that, all the police officers and FBI agents acted as if a crime had actually been committed. They asked us if we saw anything. Of course I raised my hand. I WANTED TO BE PART OF EVERYTHING!

"Bye Claire!" I said, as the FBI agents took me and about 20 other people to another room to interview us about what we had seen.... 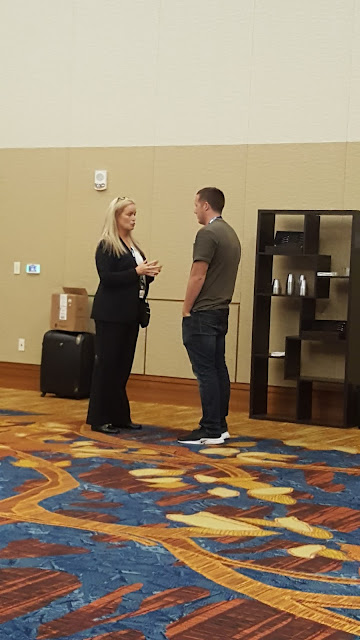 This was the first FBI agent to interview me. I told her everything I saw.
"You're still shaking!" she told me.
"I know," I said. "I really thought we were going to die for a couple seconds!"
Jim Clemente (my dude!) was in the room interviewing witnesses too.
"Jim, this young woman is still shaking!" the agent said.
"Well, get her statement," Jim said, all business. He was playing the part as if this was a REAL crime. 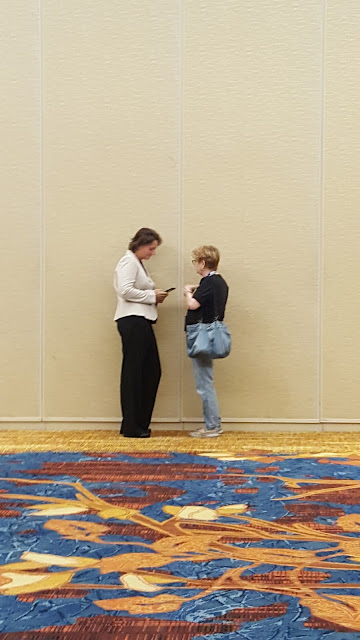 This Indianapolis homicide detective did my second interview, but in the end they did not choose me to be one of the witnesses to be interviewed in front of the crowd. I was sad about that, but you can't get everything you want at CrimeCon! They only chose three people to go onstage and then they choose a couple people to be in a "line up" for the witnesses to identify the perps. 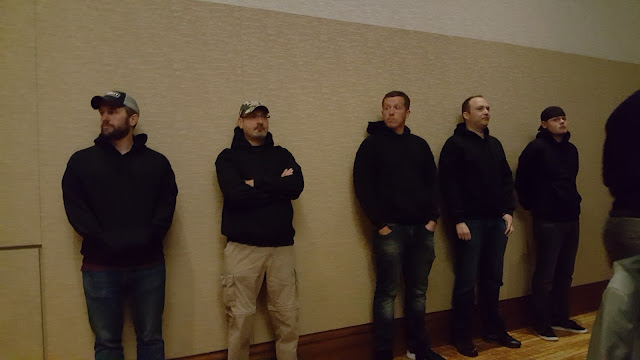 The men in the lineup. Two of them were the actual perps- the ones on the right!
Do you recognize Derrick from Big Brother!? 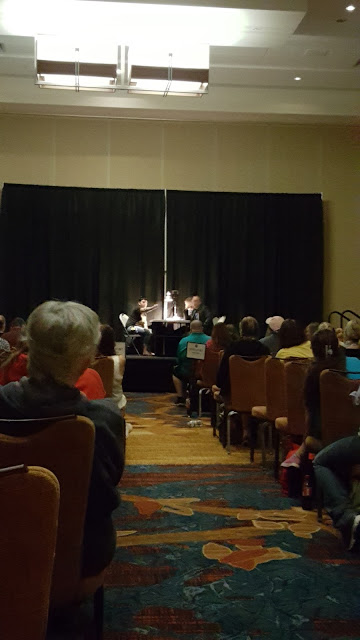 One of the witnesses onstage being interviewed... 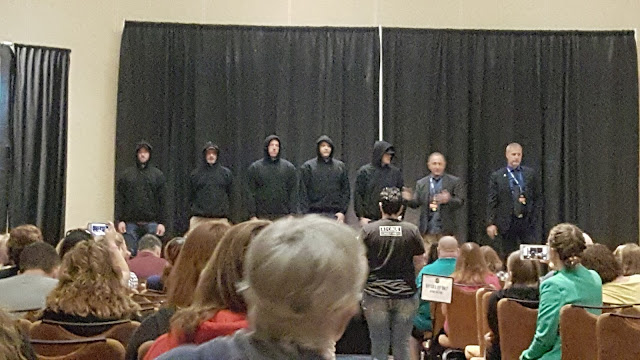 ... and the trying to identify perps in the lineup. 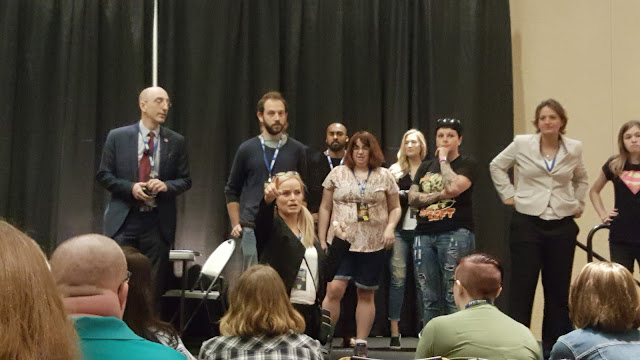 There was actually a woman involved in the crime too- THE FBI AGENT THAT INTERVIEWED ME! She was the one that ran in front of me and grabbed the young girl!

It was interesting to hear the testimony from the three witnesses they chose. All three had elements of the crime correct, but they also had elements wrong. Two of them heard a gunshot but one did not. I didn't hear a gunshot, just an air horn!

The whole point of the session was to show how unreliable eyewitness testimony is! And I believe it. The "crime" only lasted about 15 seconds but I SHUT DOWN. I always thought I'd be able to save myself if something terrible was happening but now I know I would probably shut down!

The iWitness experience was one of the coolest things that happened at CrimeCon!

After that, Claire and I checked out of our hotel room and left our luggage with the bell hop. There was still more CrimeCon to experience!

We caught the tail end of F. Lee Bailey's speech. He still actually believes OJ was framed and that Mark Fuhrman planted the bloody glove. Oh my word... 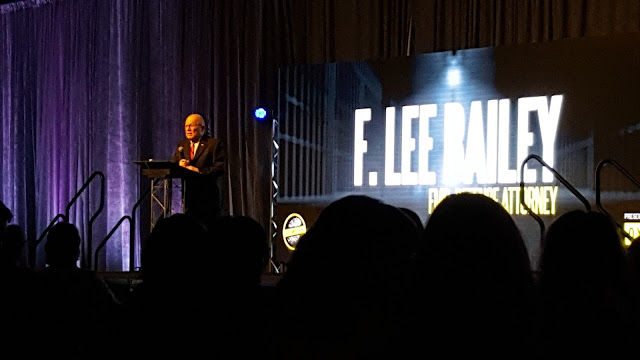 The last session was about the Tricia Todd murder, with an emphasis on how you can help someone who is suffering from domestic violence. 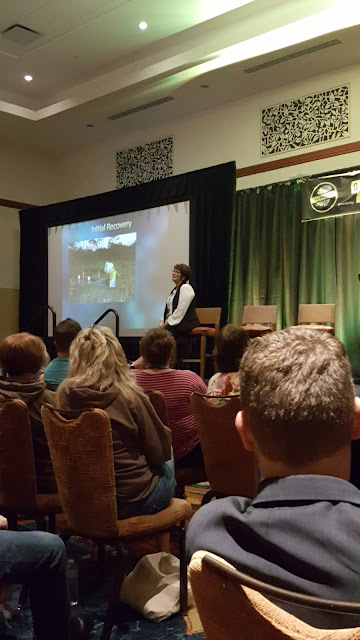 And with that, CrimeCon was over! We went to the Closing in the Grand Ballroom and Jim Clemente talked about what an AWESOME weekend it was!

Since we had a couple hours to kill before going to the airport and Claire was starving, we went to a nearby TGI Friday's for lunch. We ate and chatted for about an hour and a half.

Unfortunately, the menu had ALL THE CALORIES listed. I freaking hate that. It makes me crazy.

"Do you want me to read you the menu?" Claire asked.

Claire was so nice to read some of the menu to me and help me pick my meal so the calories weren't staring my in the face.

When we arrived at the restaurant, we were the only people seated in our section. But by the time we were getting ready to leave, the place was hopping.

Then the strangest thing happened... The woman sitting in the booth behind Claire started POUNDING on her table very loudly.

"Stop that!" her husband hissed.

"I just can't take it anymore, it's been an hour and twenty minutes of this!" the woman growled back at him.

Claire and I froze. What the hell was going on? That woman had made a huge scene pounding on her table. Was she mad at us? We hadn't been talking that loudly... and we were at freaking TGI Fridays! There were people seated all around us chatting away.

We were about to leave anyway, so I sat at a bench near the door and waited with our things while Claire used the restroom. While Claire was gone, the woman who pounded on the table was leaving with her husband. When she walked by me, she glared and rolled her eyes.

Oh my word, she WAS mad at us! When Claire came back, I immediately told her what the lady did. We wracked our brains, wondering if we were too loud, if we were talking about anything controversial, or just anything we could have been doing that would have frustrated the woman so much. We couldn't think of anything, but she was clearly pissed at us. It shall remain one of the mysteries of CrimeCon...

We grabbed an Uber to the airport and waited for our flights together. Claire was headed back to Atlanta and I was headed to Baltimore. Our gates were right next to each other and departed 5 minutes apart. I popped an Ativan about an hour before my flight was supposed to leave and hoped it would do the trick.

While we were walking toward security, guess who was walking beside us? JIM CLEMENTE, JIM FITZGERALD, AND LAURA RICHARDS!!!!!!!!!!! YOU KNOW, JUST SOME FORMER FBI AGENTS!!!!

"It's not every day you see three FBI agents walking through the airport," I said to them.

"Aw, you blew our cover!" Jim Clemente said. "Did you have fun at CrimeCon?" (He either recognized us or figured we had been there.)

Claire and I both said yes and wished them safe travels.

OMG I CAN'T BELIEVE WE SAW THEM!!!

Fun fact: The FBI agents had to go through security and take off their shoes just like the rest of us!

The flight was uneventful, except for two bouts of turbulence that nearly gave me a heart attack. And the landing always scares me.

Once our plane finally came to a stop, the 12 year old boy beside me looked at me and said, "You don't fly well, do you?"

My parents picked me up in Baltimore and drove my ass back home to Camp Hill. They even bought me McDonald's on the way home.

And that was my weekend at CrimeCon! Now, if you actually read through all three of these CrimeCon posts completely, let me know in the comments!!!!