My Evening with Terry Gross! 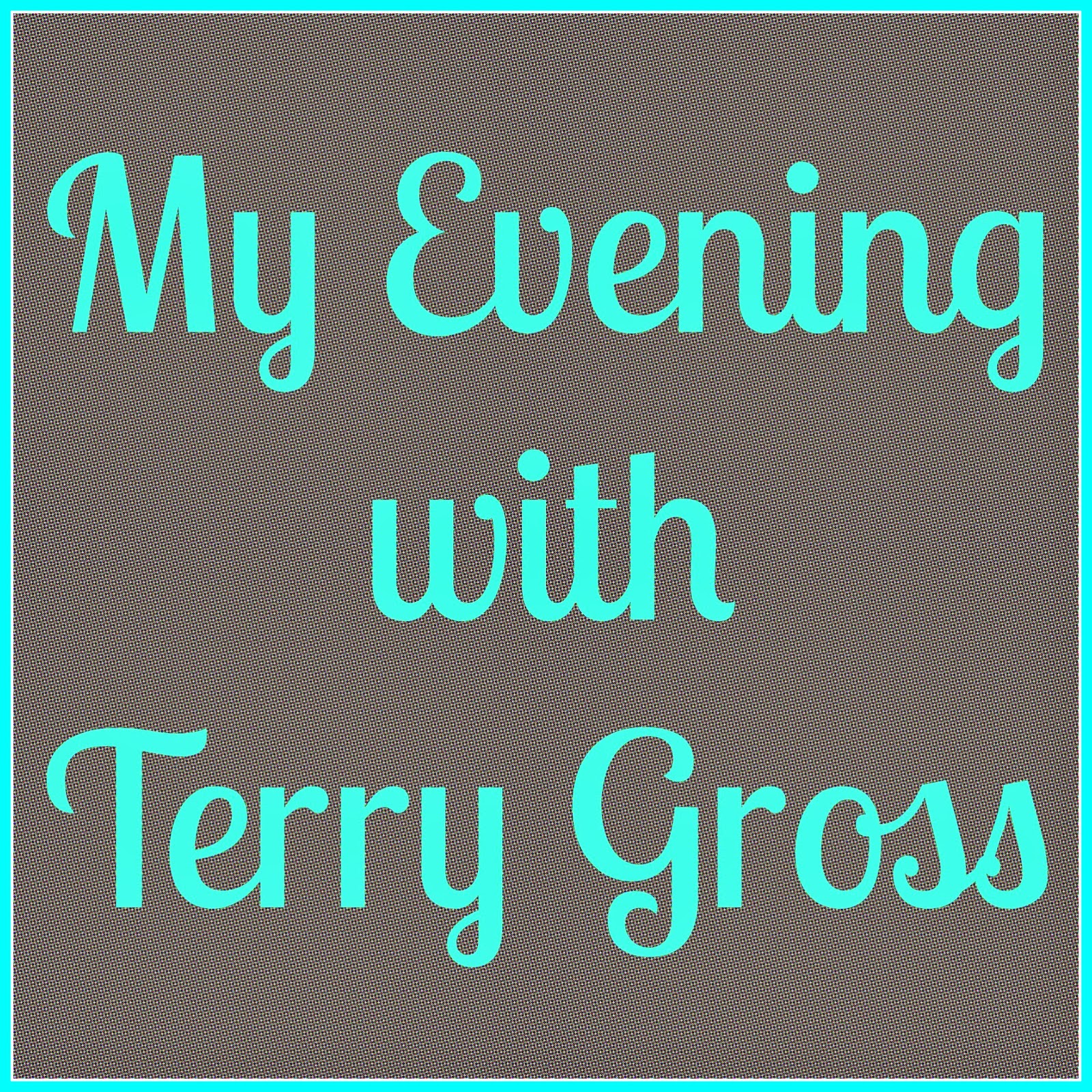 **I realize this is quite a long and detailed post, and while I want to share my evening with you, this long, drawn out description of my evening is mostly so I have something to look back on and relive... since it was one of the best nights of my life!**

I don't listen to music in the car. I don't listen to music on a run. I listen to pod casts. I don't remember when I discovered the NPR program "Fresh Air with Terry Gross", but it soon became a staple on my runs. I've gone back in the archives and listened to almost all of Terry's old interviews. Her voice is comforting to me and at this point, listening to her voice in my ear buds is like listening to an old friend.

Last night, I got to meet Terry Gross! She was speaking at the Keswick Theater in Glenside, PA. To give you an idea, it's close to Philadelphia and about an hour and forty-five minutes from where I live. 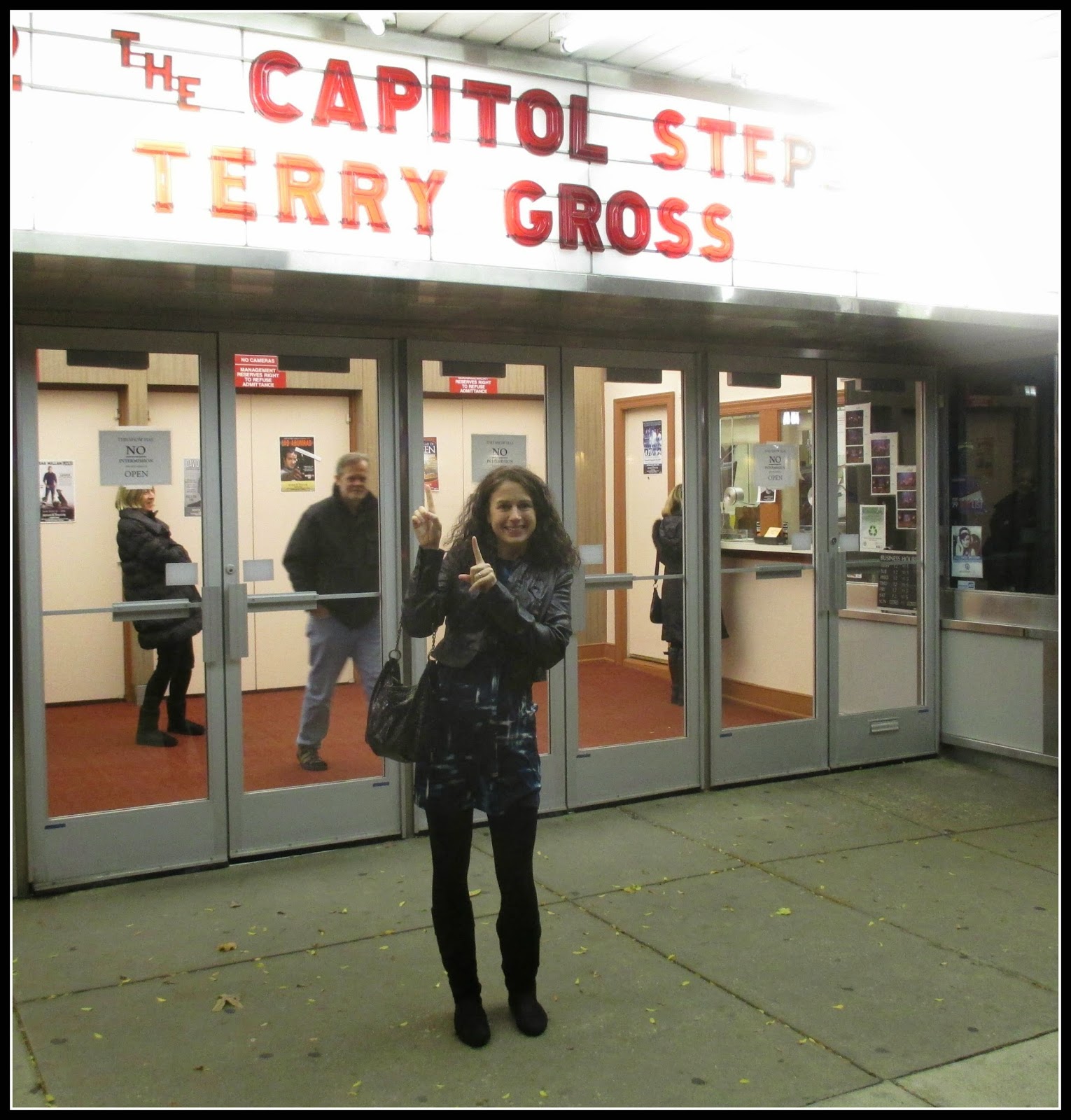 
I bought tickets to her lecture and tickets to the VIP reception beforehand. My friend Maggie (who practically lives right down the street from the theater) came along with me. She is also a huge Terry Gross fan, and a wonderful, interesting person who I wish I could see more of! 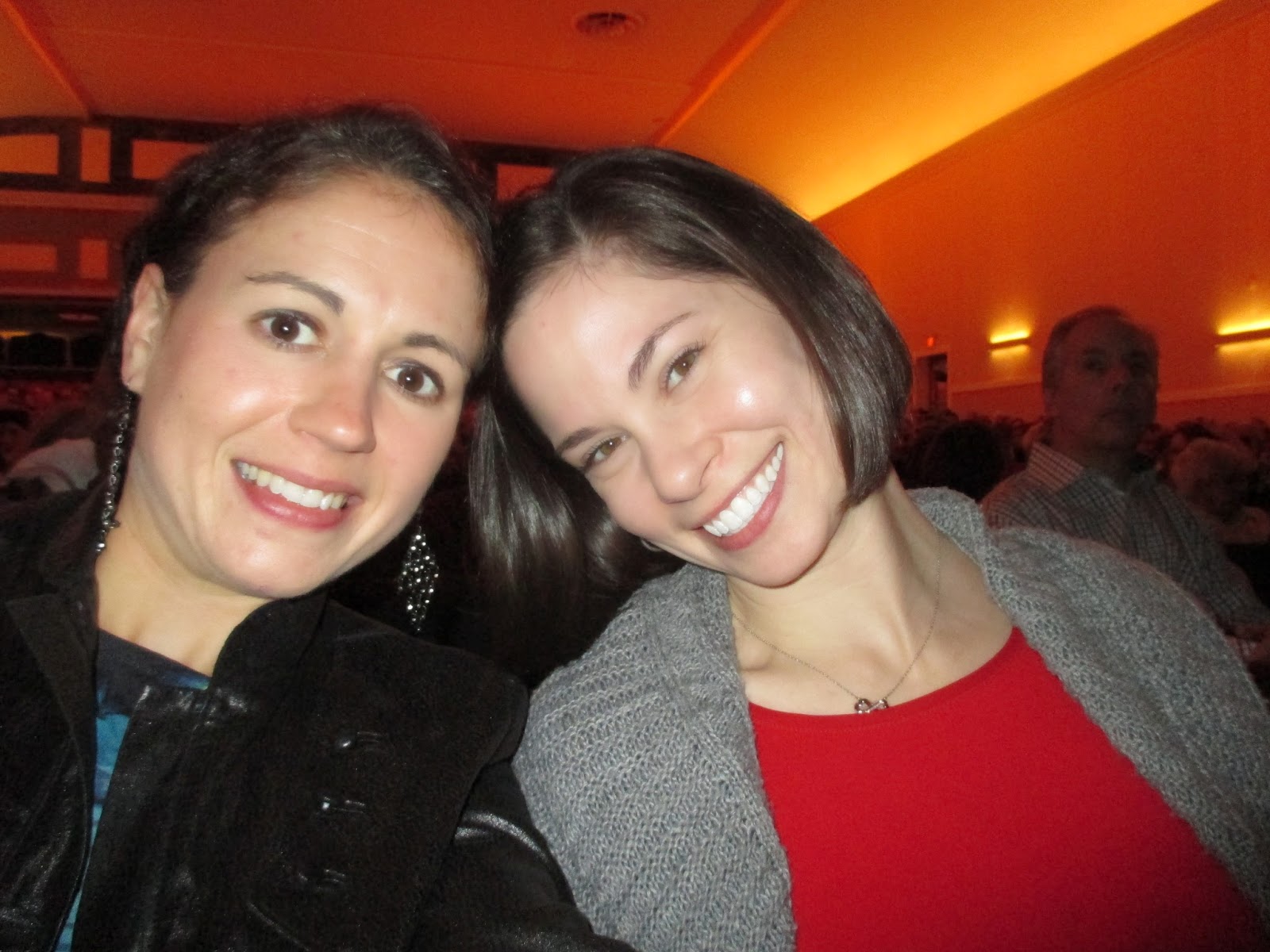 You wish she was your hot date!

When we walked into the theater, the reception wasn't too crowded. There were refreshments and an open bar. What type of people buy tickets to a VIP reception with Terry Gross? Mostly older, artsy-fartsy couples in black rimmed glasses and quilted vests. There were a couple "youngish" folks like Maggie and I, and we befriended them quickly! I mean, I want to be best friends with anyone who has the desire to meet Terry Gross.

Terry walked into the reception with a smile and looked like she felt a little bit awkward. She chatted with a group of people, then her handlers escorted her over to an area where people lined up to meet her and take pictures. I just stared at Terry the whole time. She was so freaking cute! First of all, she was tiny, which I already knew. But she was also gorgeous.

Maggie and I jumped into line for pictures and discussed what we would possibly say to Terry Gross when we met her! It turns out, you can plan what you are going to say all you want, but when you finally meet your idol, you don't know what is going to come out of your mouth!

When it was finally my turn, I was so freaking nervous. I held my hand out and I think she shook it, but I honestly can't remember. I am going to type out our conversation as close as I can remember. But first, I want to mention that her voice in real life sounds exactly how it sounds on the radio. Also, she started asking me questions, which is as close to being interviewed by Terry Gross as I will ever get, so I am just going to go ahead and cross that off my bucket list!!! 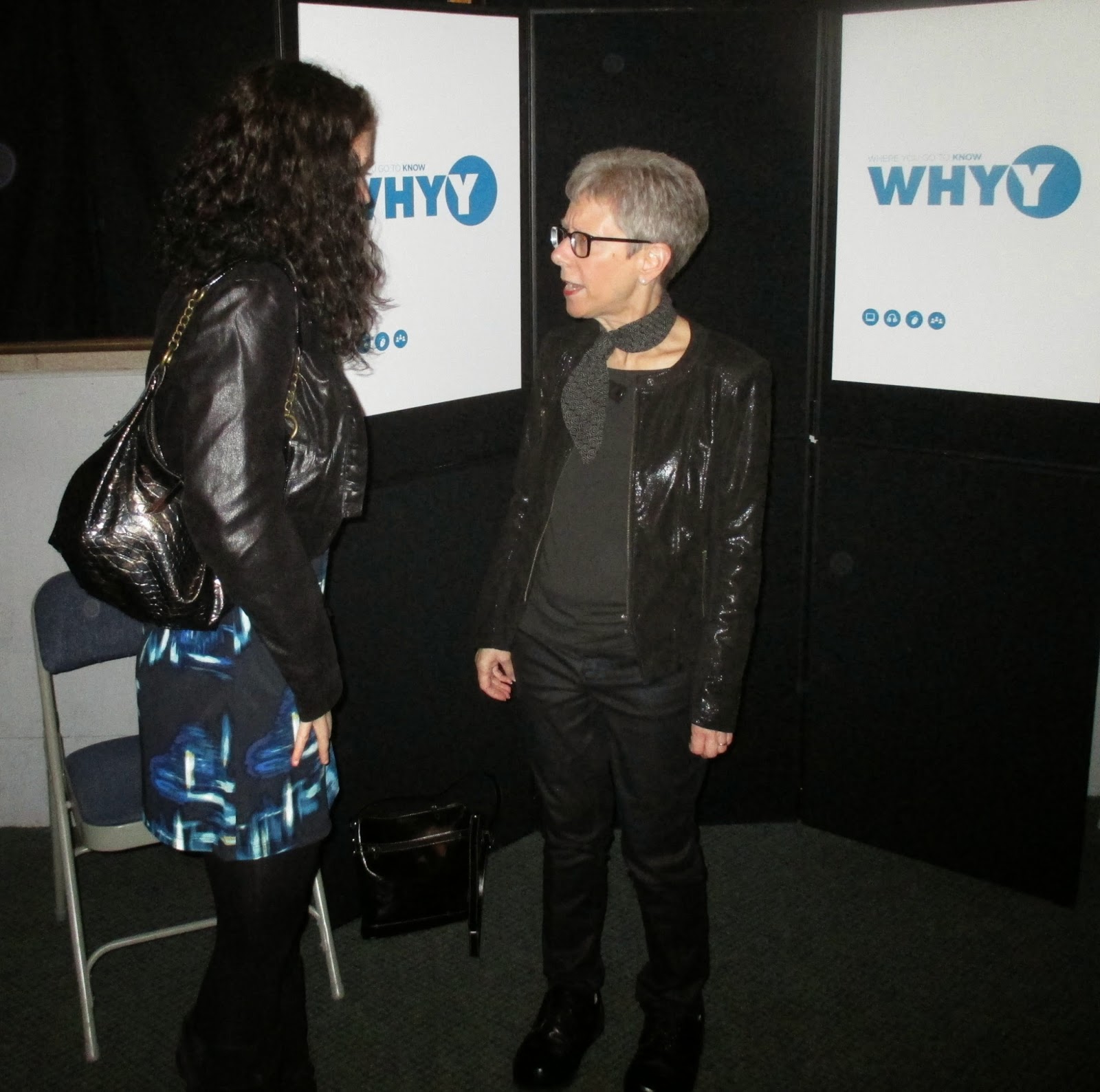 My conversation with Terry, to the best of my recollection:

Me: Hi Terry! My name is Megan and I am so excited to meet you!
Terry: Hello. (smiling)
Me: I listen to you while I run.
Terry: Oh, so you pod cast?
Me: Yes, yes I do. I go back and listen to all of your old interviews, too. I just love them.
Terry: Oh, thank you. And what do you do?
Me: I teach music. So I love when you interview lyricists because that is so fascinating to me.
Terry: What kind of music do you enjoy?
Me: I love musical theater.
Terry: Have you ever been to the opera? Philadelphia doesn't have a large musical theater scene, so I tried the opera, not knowing what to expect, and it is just wonderful.
Me: No, I have never been to the opera but I will definitely take your advice and go! It was great to meet you! 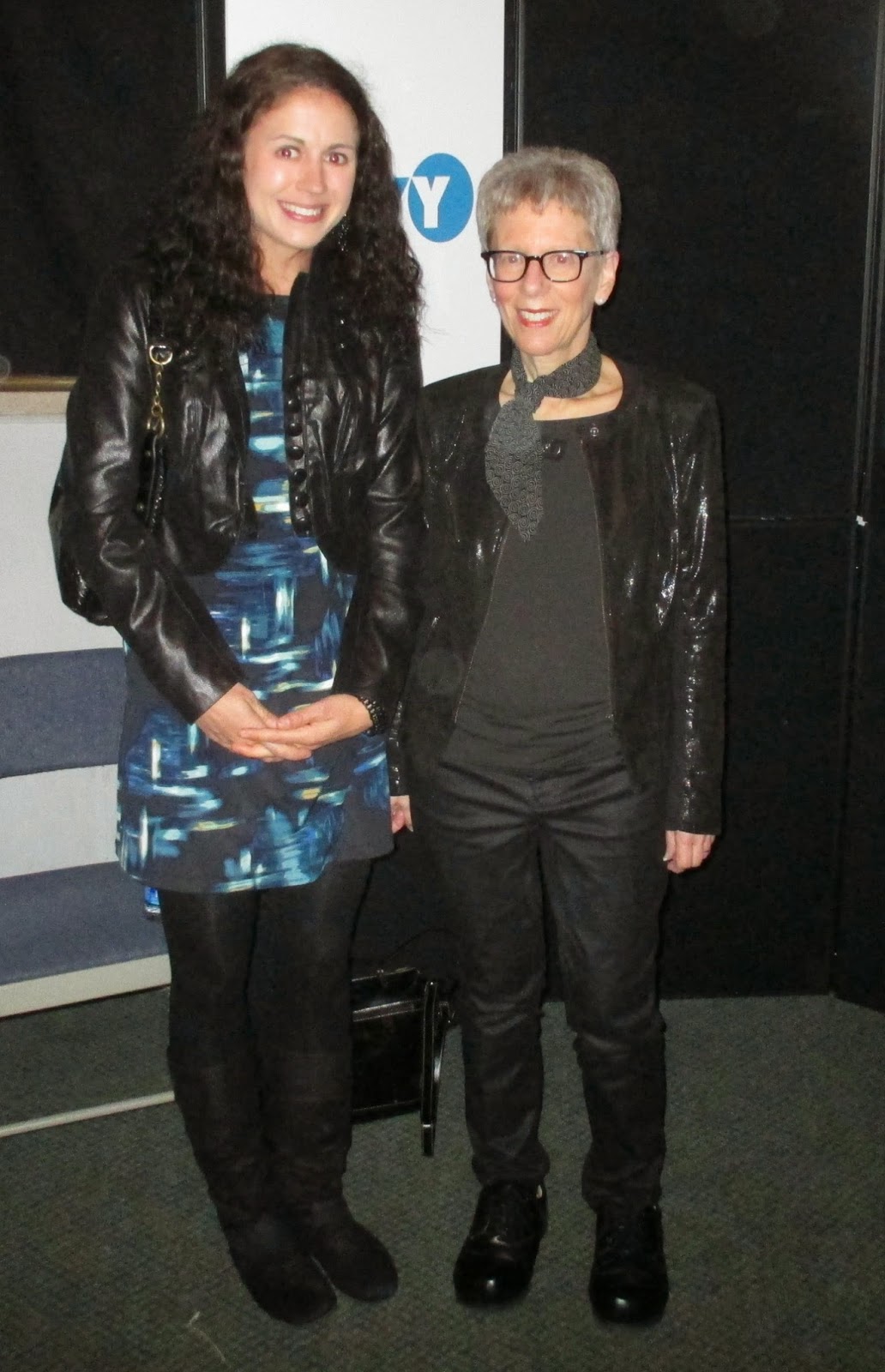 We coordinated our outfits!!!


After Maggie and I met Terry, we mingled and chatted until her lecture started. 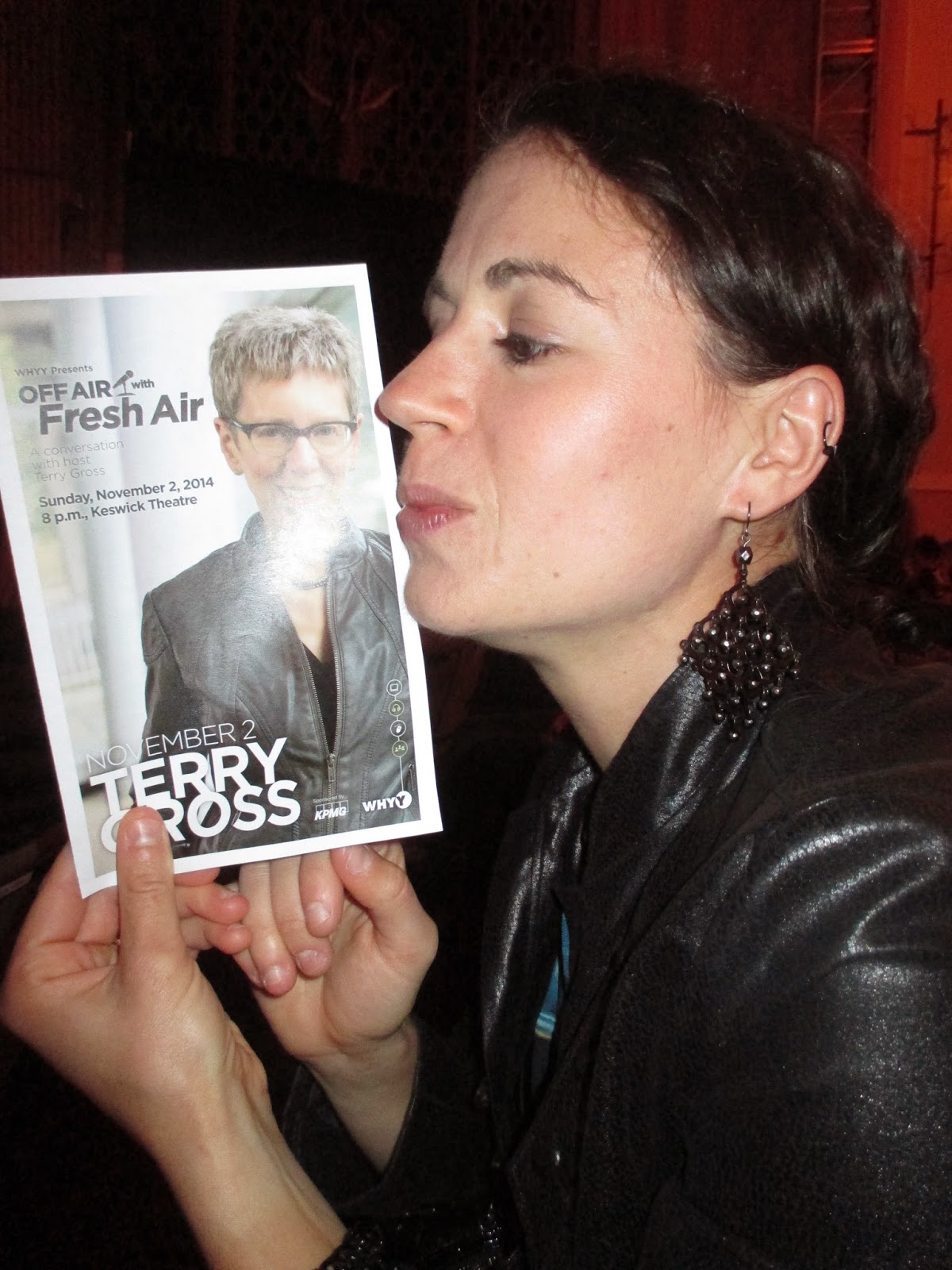 Waiting for the show to start... So giddy from meeting my gal!!!! 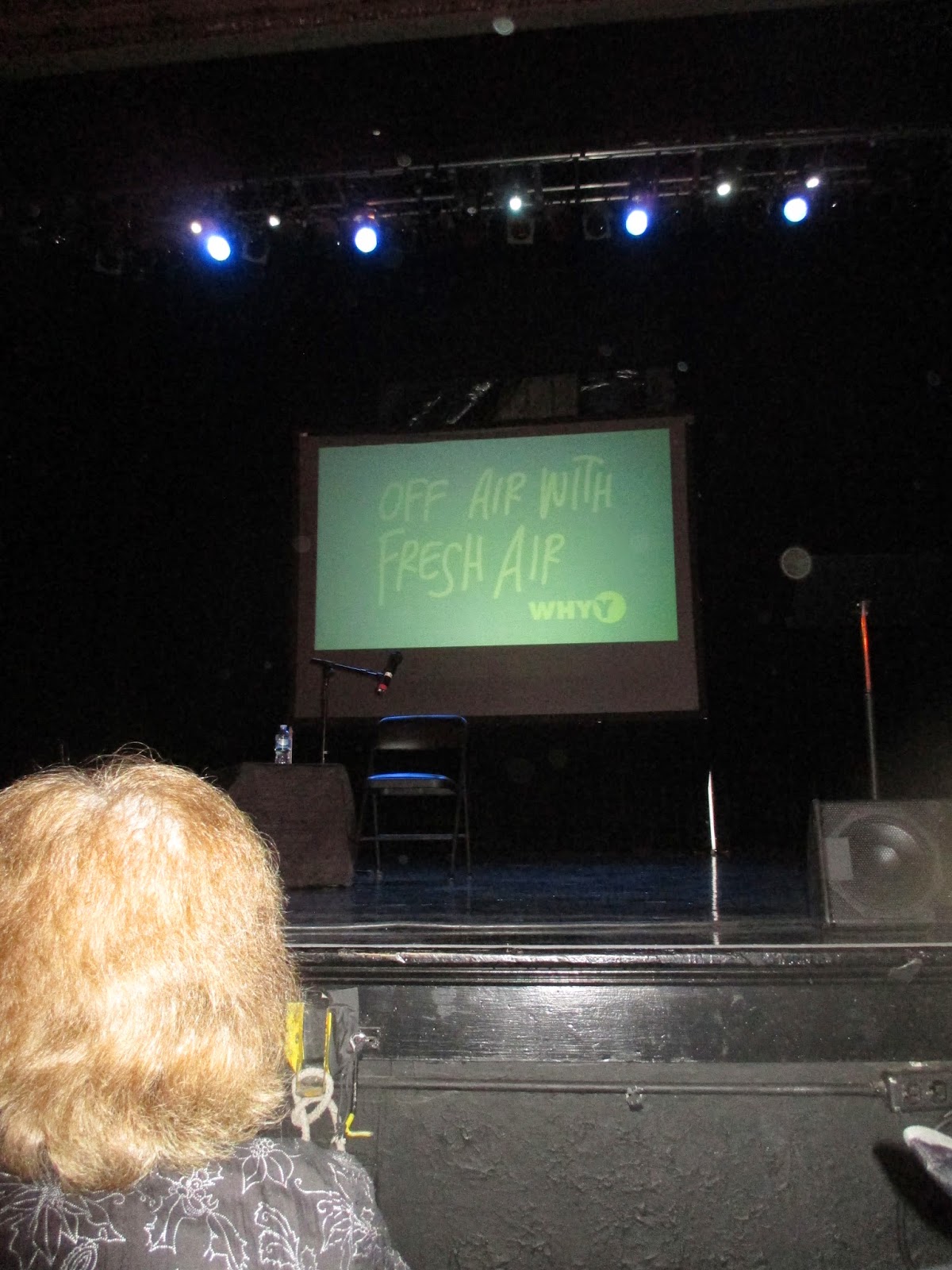 Terry stood for some of her lecture. Sometimes she sat on that chair.
The screen in the back flashed pictures when she was playing audio recordings from past interviews.

Our seats couldn't have been more than 15 feet from her. SO. FREAKING AWESOME.
When I bought the tickets, it said: "You will enjoy Terry's lecture from the best seats in the house."
INDEED!!!!!!

During her lecture, she played some excerpts from past interviews and gave us some inside information about them. Some of the interviews she played included: Hillary Clinton, Bill O'Reilly, Triumph the Insult Dog, Gene Simmons, and Maurice Sendak.

After Terry spoke, she opened it up to questions and answers from the audience. I didn't ask any questions because I felt like everything I wanted to know about her was too personal and she would never answer!

- She has been married since 1996 but has been with her husband since about '78. They got married before they lived together. (Yes, I wrote that correctly!)

- Terry used to do more public appearances but her job is so time consuming it is hard to do.

- She prepares for an interview the night before and the day of. She wishes she had more time to prepare!

- Terry does not like interviewing politicians because they can't be their authentic selves.

- Her first job was teaching 8th grade English and she was fired after 6 weeks. She was so relieved and was happy she was fired! Teaching was not for her.

- She chose to not have children and felt fortunate enough to be one of the first generations of women with access to birth control. But she loves watching her producer's children grow up.

- Terry doesn't understand why anyone likes her voice.

- She was adamant that she doesn't make people interesting, they just make sure the boring people don't get on the show.

- Sometimes they record interviews that never make it to air but it rarely happens. And she won't name names.

- People have turned down interview requests, but it's very rare. Normally, it's the show that turns down people who want to be interviewed.

- Her guests are not in the studio. The show doesn't have the budget to fly them to Philly and the people usually don't have the time to travel there. The guest usually goes to their local WHYY station to record the interview.

Let me just say I feel so fortunate and lucky to meet this awesome broadcaster and to share the experience with Maggie! 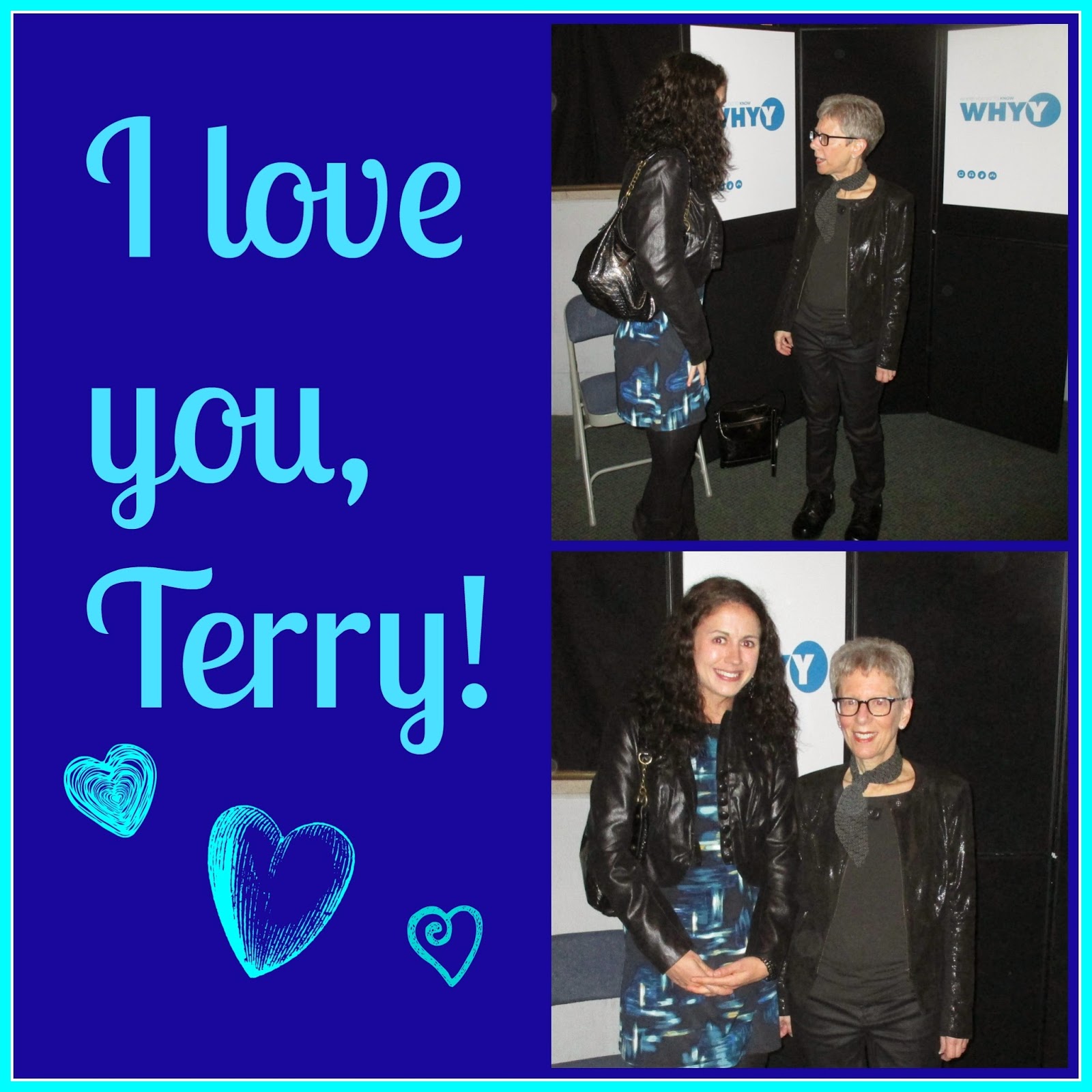 This is the saying Maggie came up with on the way into the theater. She is genius! 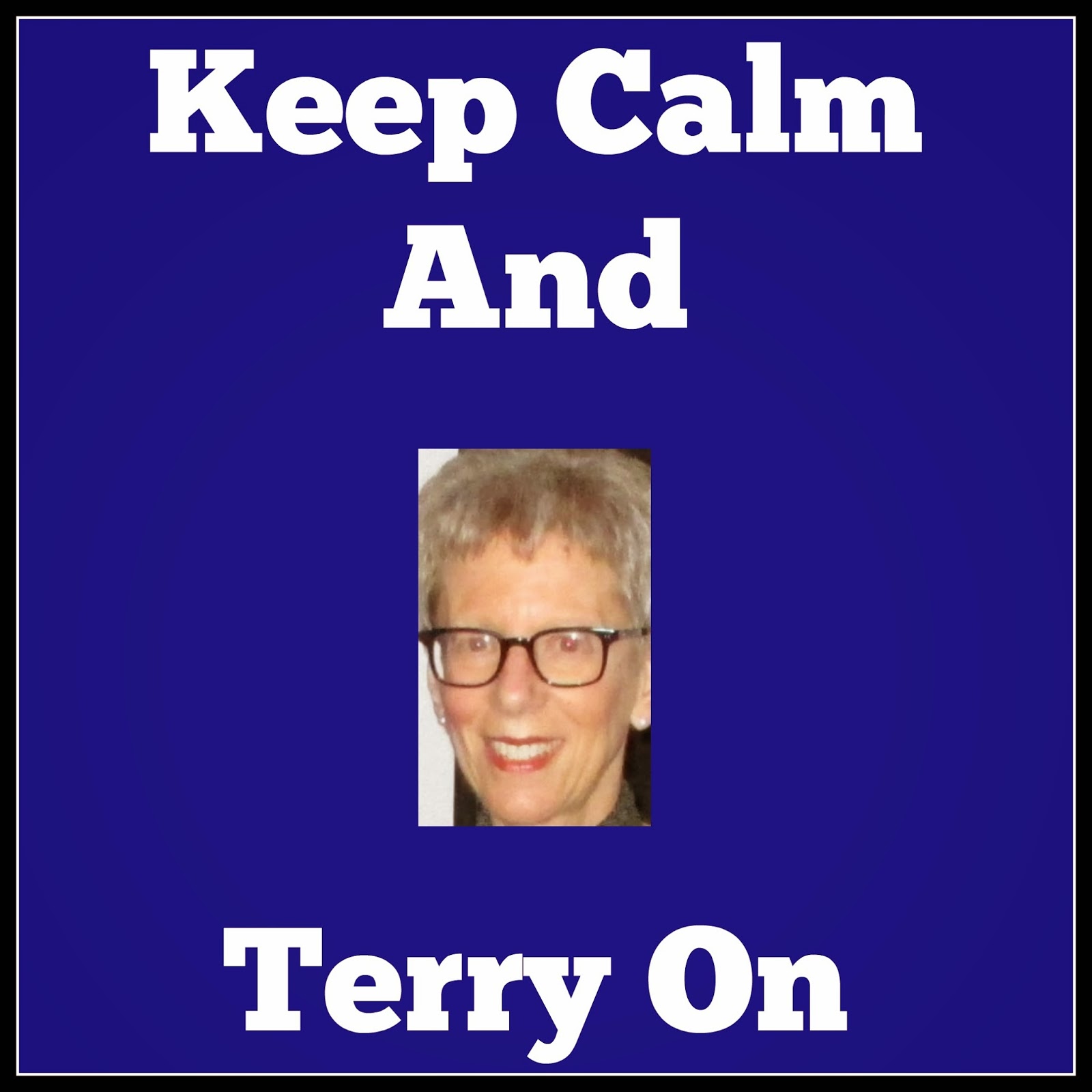 Have you ever met your idol?
Do you listen to Fresh Air on NPR?
Posted by Meg Go Run at 5:30 AM