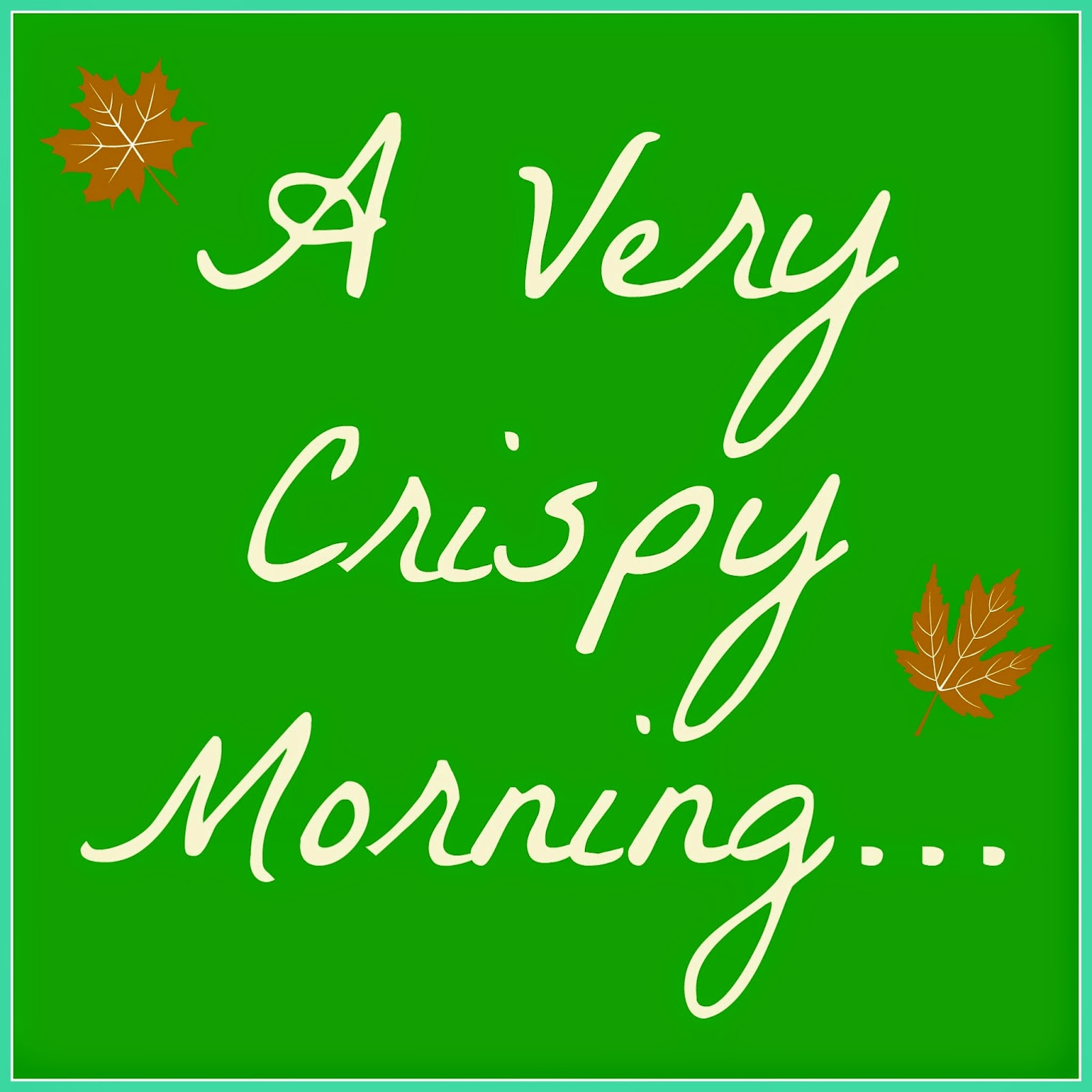 I pretty much run by myself ALL. THE TIME. But would you believe it if I told you I used to run with a group every freakin' weekend!?

When I first started training for a marathon, I ran with Team In Training a few times. My mother-in-law was sort of a pseudo coach for them at the time, so I was allowed to join them for a few runs- even though I wasn't technically a member. (I did bring water to donate so I wouldn't be using their resources.)

At the time, there were a lot of past Team In Training runners who weren't running with the team anymore, but still enjoyed the camaraderie of running long with friends. So a little "off shoot" running club was formed. Anyone was allowed to join. You didn't have to be a past Team In Training runner. We called ourselves the Crispy Balance Running Group- "Crispies" for short.

We were pretty consistent for years. Someone would host a run on Saturday around the Harrisburg area. The host would design the course, print directions, and set out water stops. Sometimes the host would run and sometimes they would crew. There was even a point where Saturdays were road runs and Sundays were trail runs. I met most of my best running friends from the Crispy Balance.

I trained for all but 2 of my marathons with the Crispies. I ran my first Boston Marathon with three other members of the club. I trained for my 50 miler with the club and ran it with one of my friends I met through the club. I really can't count the number of wonderful friendships I have developed from running with these cool people. Some of them have infiltrated into my life and are more than just "running friends", and some of them are just "running friends". And that is okay. There is room in my life for all types of friends! And even if it's someone I only see on runs, and I haven't seen them in a year, we pick up right back where we left off. It's very easy to talk and bond with someone on a run.

Even though we were consistent for years, somewhere in the past year or so, we stopped planning runs. There would be the occasional meet up where 2-3 people would show, but nothing like the huge group runs of the past.

Yesterday, I was lucky enough to attend a Crispy Run! I saw a lot of my Crispy Friends and it was so refreshing to run with a group again! We met at 8:00am on City Island in Harrisburg. It was pretty cold, but I managed to dress correctly and felt comfortable throughout the whole run. I ran up ahead with my friend Charlie, who is a challenge to keep up with. I know I will have a good run if I stick with Charlie, so that is what I did!

I don't have any pictures from yesterday because I forgot my camera, but I do have pictures from past Crispy Runs and races that I thought I would share with you. We really are a fun group! As you can see, we are very silly, love themed runs, and don't take ourselves too seriously... 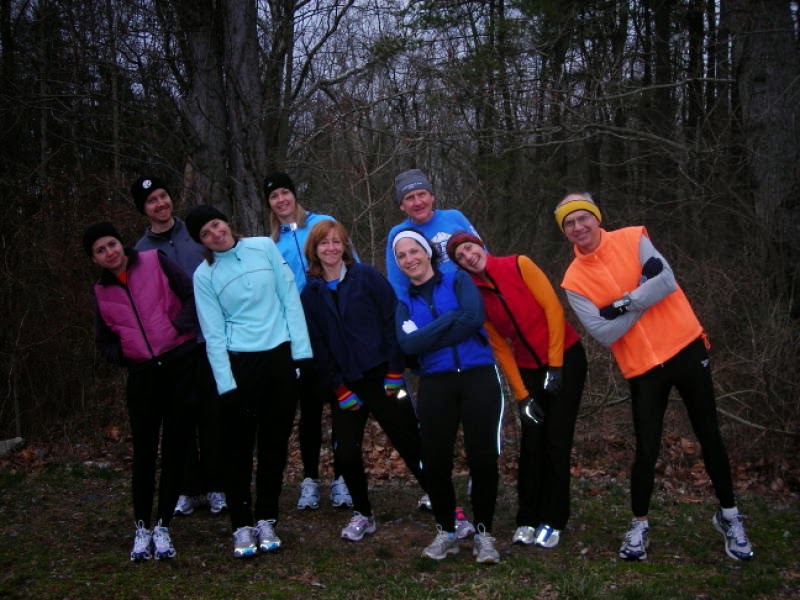 We love taking group shots before a run.
I guess it was windy that day... 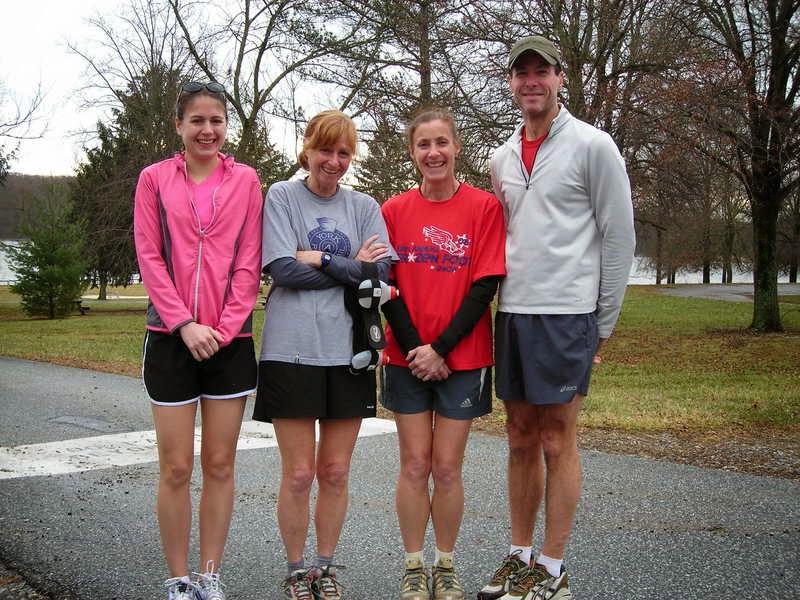 Me, Deb, Anne, and Jeff before a freakishly hot December Trail run. 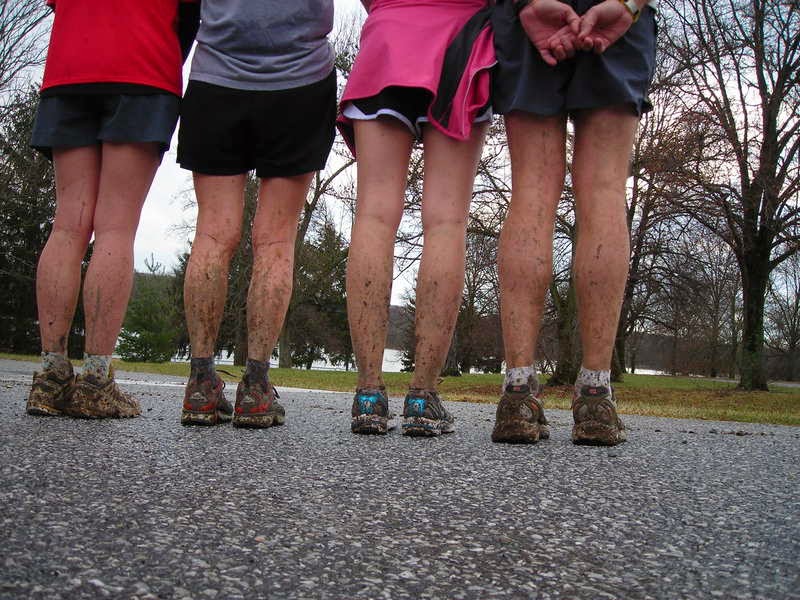 After our run. It was a little muddy. 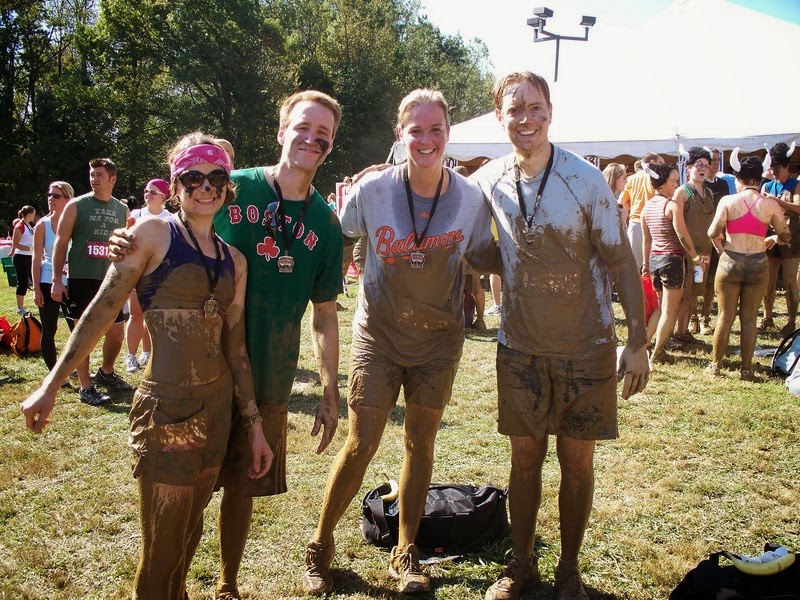 Speaking of mud, I ran a Warrior Dash with Paul and two Crispies- Mary and Steve. 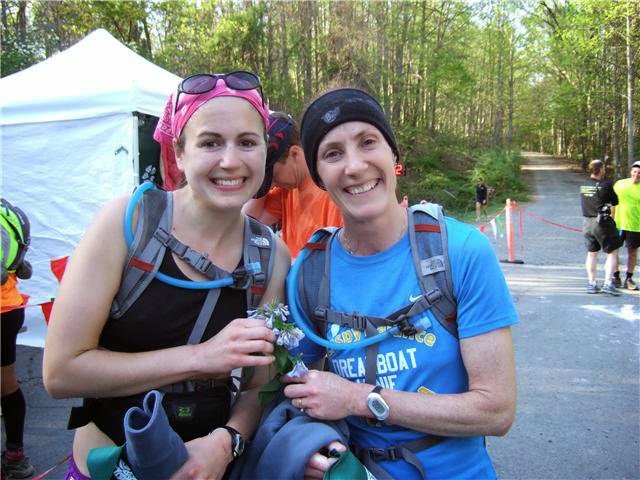 My favorite picture of me and Anne- we just ran 50 miles! 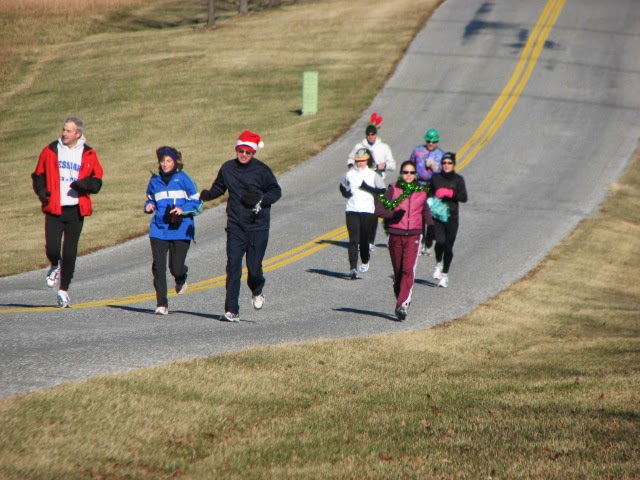 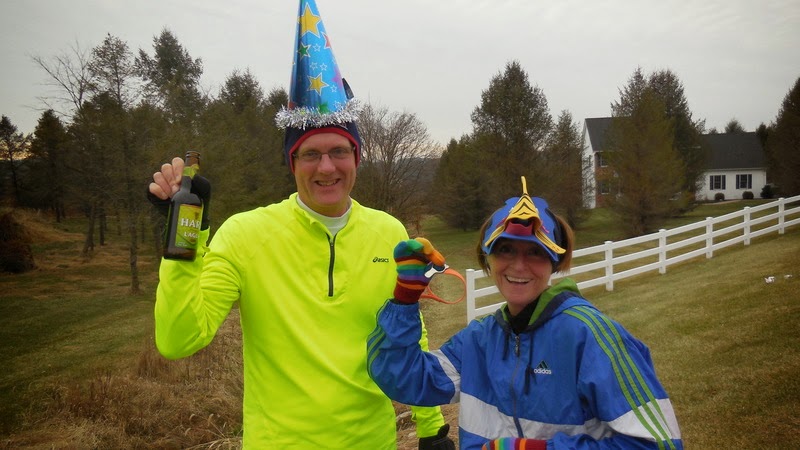 For the New Year's run, we find little things along the course we must wear, take with us, or drink... like silly hats and beer.
That's my mother-in-law, Deb, and Crispy Runner Charlie (the one I try to keep up with). 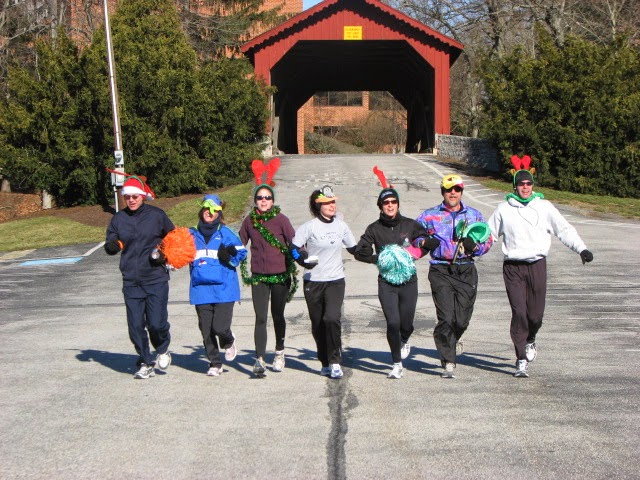 I remember this year- we finished the New Year's run arm in arm, running across the covered bridge as a single unit of craziness! 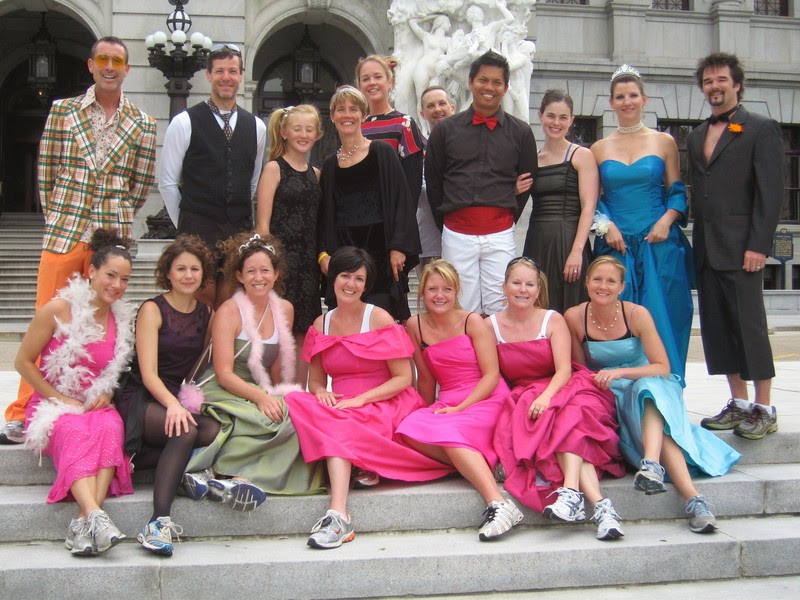 Then of course there is the Spring Formal Prom Run.
We always stop on the Harrisburg Capitol steps to take a picture. 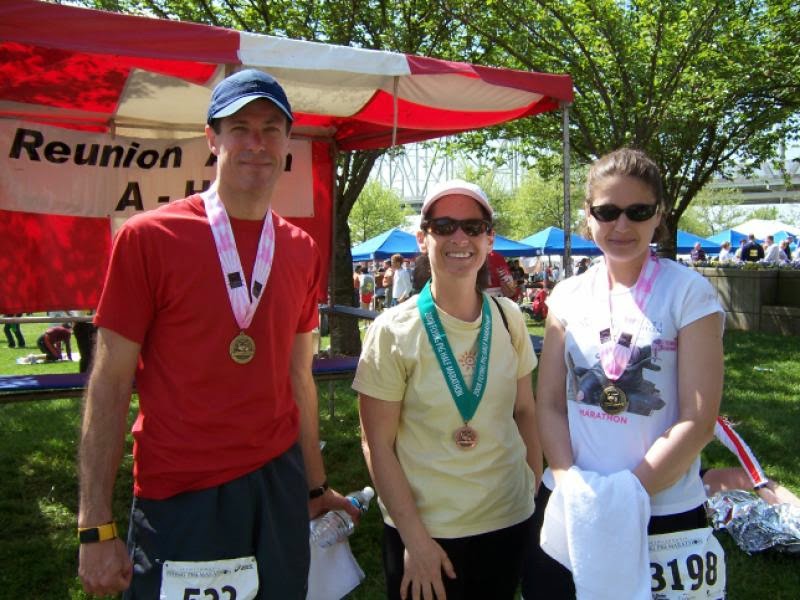 Jeff, Tammy, and I after running the Cincinnati Flying Pig Marathon. 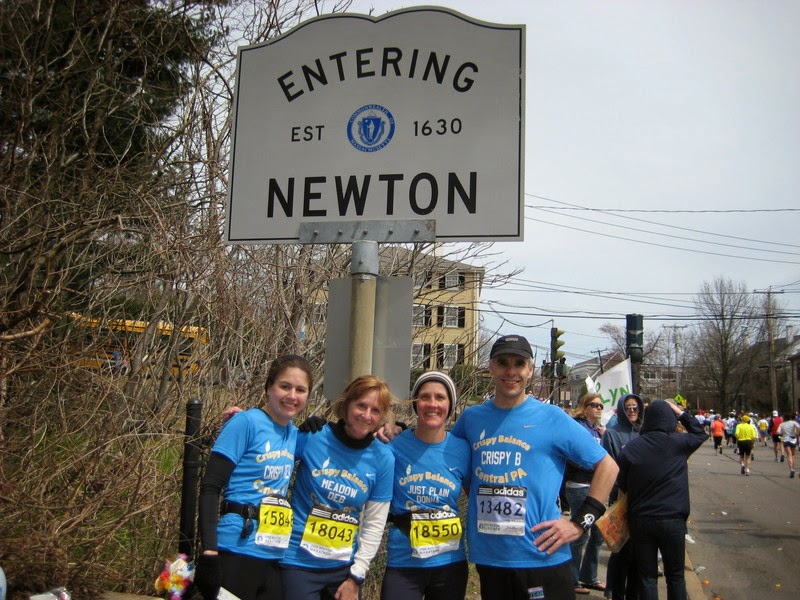 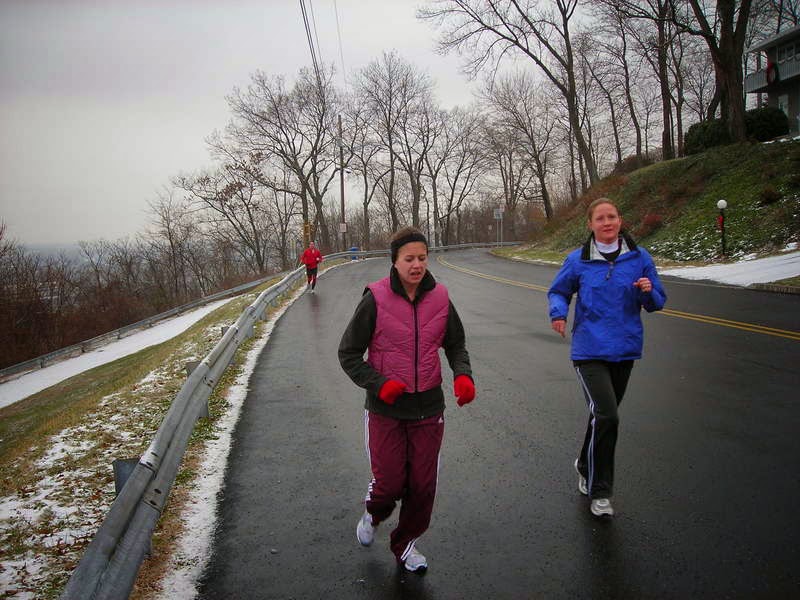 Me and Tracy during a group run. I look rough! 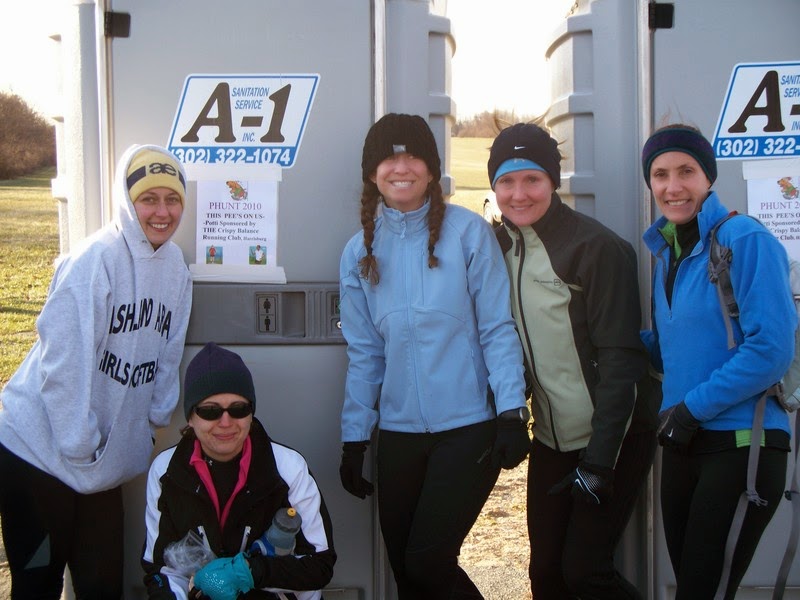 A few of the Crispy Girls (Olivia, me, Jennifer, Tracy, and Anne) posing outside
one of the port-o-john's we sponsored at the Phunt 50k.
The race never had bathrooms so we brought the bathroom with us! 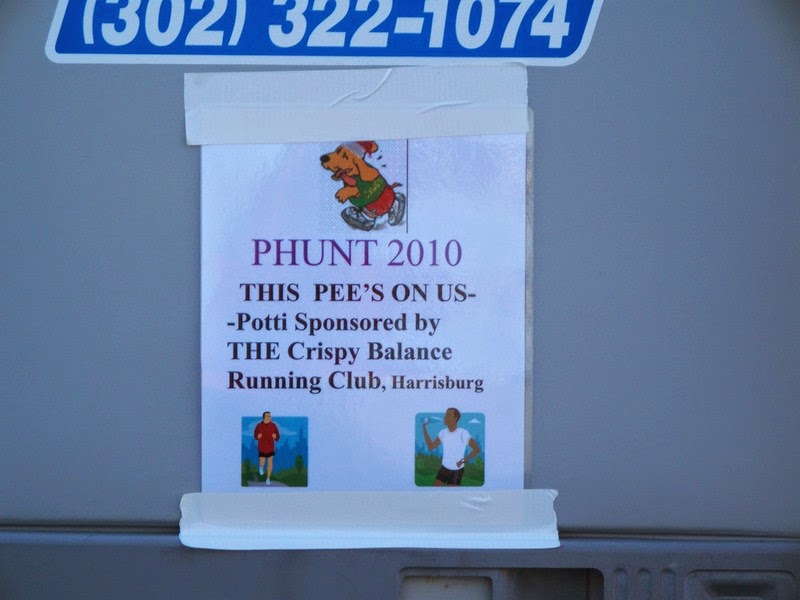 Have you ever been part of a running group?
Posted by Meg Go Run at 5:30 AM