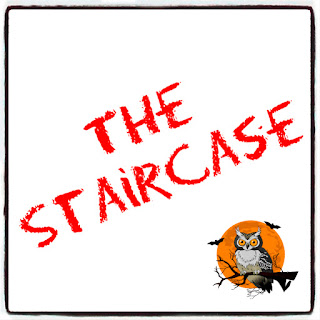 The Staircase is a 2004 documentary on the murder of Kathleen Peterson and the flaws in our criminal justice system. It was recently re-released on Netflix with a few extra episodes. I will say upfront that this documentary is VERY biased toward the defense and leaves out A LOT of compelling evidence that points to Michael Peterson's guilt. I may be getting ahead of myself, but I just wanted to address that right off the bat. If the only information you have on this case is based of the documentary, I would highly recommend you seek out some other articles and/or listen to the BBC podcast entitled Beyond A Reasonable Doubt. It's always good to get not just both sides of the story, but the complete story and not one that cherry picks facts. 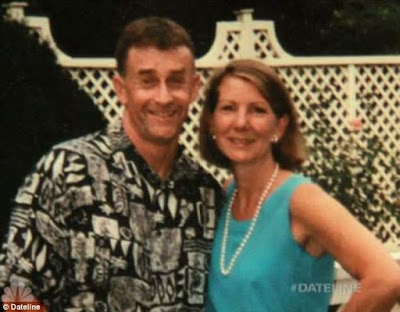 In the early morning hours of December 9, 2001, a 911 call was made from Michael and Kathleen Peterson's home in Durham, NC. When authorities arrived, Michael's wife, Kathleen, was dead at the bottom of the stair steps. The scene was extremely bloody. Michael claimed he was out at the pool for an amount of time (his story changed as to how long he was out there) and when he came back in, he saw Kathleen laying there. Investigators immediately determined there was something not jiving between Michael's story and the crime scene. He was soon arrested for Kathleen's murder and put on trial.

The Trial, Appeal, and Alford Pleas:

At the trial, Michael was found guilty of murder and was sentenced to life in prison. Michael's changing story and blood spatter evidence helped seal his fate. The fact that he was cheating on his wife with other men and the Petersons were in $145,000 in debt pointed to a motive.

After about eight years in prison, the testimony of the blood spatter expert for the state was called into questioned and eventually dismissed. Peterson was released on bail. Instead of going to a second trial, he accepted an Alford Plea, which is basically where the defendant pleads guilty... not because they are admitting they are guilty, but because they realize the evidence against them is compelling enough to convict. Peterson was convicted of first degree murder for the second time. He was sentenced to time served and now lives life as a free man.

SO, DID MICHAEL PETERSON KILL HIS WIFE? OR IS HE INNOCENT? THERE ARE SEVERAL THEORIES.

Theory #1. Kathleen Peterson fell down the steps. The defense claimed that Kathleen fell down 4-5 steps and her death was a tragic accident. My opinion is there is a 0% chance that this is what happened.

Theory #2. Michael Peterson killed Kathleen. The prosecution contended that Michael Peterson beat his wife to death with a blow poke or similar instrument. My opinion is there is a 99.5% chance this is what happened.

Theory #3. An owl attacked Kathleen. Kathleen was found with two microscopic barr owl feathers in her hand, a few small pine needles, and her own hair. Some people believe she was attacked by an owl outside her home, then she ran up the stairs and fell. I feel like there is only a .5% chance this happened.

You can find a lot of information online about all three of these theories, so I won't repeat it on here. What I will do is tell you why I believe Theory #2: Michael Peterson is guilty of killing his wife, Kathleen.

1. His changing stories. At first, Peterson told police he went outside to turn off the pool lights and when he came back inside, Kathleen was dead. That story did not line up with the blood evidence (a lot of it was dried!) so he changed it and said he was outside for 45 minutes.

2. The blood. So much blood. There was a bloody shoe print from Michael Peterson on the back of Kathleen's sweatpants. (She was found laying on her back.)

3. The clean up. Investigators used luminol to discover bloody footprints leading to the sink that Michael Peterson cleaned up. If he were innocent, why would he clean up his footprints? There was so much blood, the fact that there would be bloody footprints doesn't point to guilt, but the fact that he cleaned them up does. His shorts were also wet as if he was trying to clean blood off of them.

4. Kathleen's injuries. You can find sketches of her head lacerations online. I find it extremely hard to believe she could get all of those lacerations just from falling down a couple steps. Kathleen also had bruises on her arms, face and a crushed thyroid cartilage.

Last week, I had some of my friends who watched The Staircase come over to discuss the case! Our initial vote was 5 guilty, 2 not guilty. Of the two not guilty, their biggest reason was due to the tainted evidence of the blood spatter expert. Although one of my friends who initially voted not guilty in the beginning said, "Okay, he's guilty!" before she left, but I don't know if she said that under duress!

It was so fun to hang out with my gal friends and discuss true crime. Our next case is going to be The Keepers. I have no idea what it is about but I look forward to it! 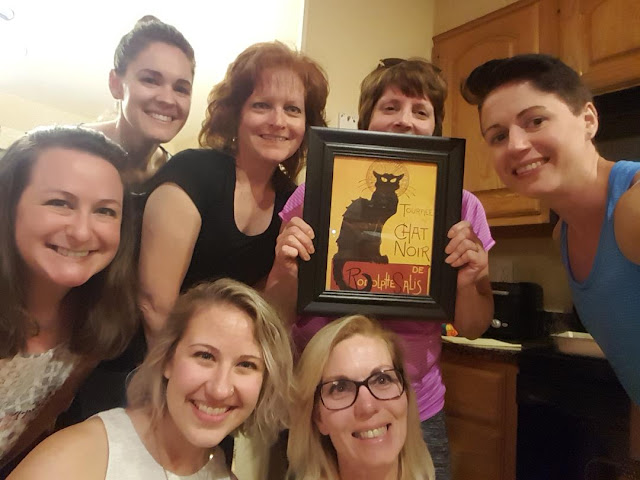 If you're familiar with the case, you'll know why we're posing with this picture!

Have you watched The Staircase? Guilty or innocent?
Any true crime cases that interest you?
Posted by Meg Go Run at 5:30 AM