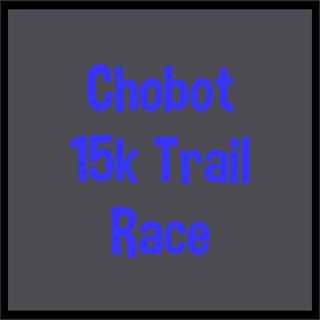 There are a lot of trail races penciled into my calendar this summer. One such race was the Chobot 15k Trail run in Birdsboro. It was in Rustic Park. The race was put on by Pretzel City Sports, which is a very reputable race company in Eastern PA. I've run many Pretzel City Sports races and they were all great, so I figured this one would be great too.

It was, for the most part. I will be honest, I found myself very annoyed before the race started. It was an easy place to get to (1 hour on the turnpike) and registration took two seconds. But then I had to use the bathroom and the line was SO LONG. There were only three bathrooms for several hundred runners. I waited for over twenty minutes, which is the longest I've ever waited. Even at Boston.

Now, I'm not above going in the woods (#1 or #2), but since it wasn't an emergency, I decided I would just wait in line. One of the reasons it was taking so long was that all the runners were taking their GRAND old time going to the bathroom. Seriously, I have never seen runners more lackadaisical about using the bathroom. Even when it was 9:02 and the race was supposed to start at 9:00 (.4 miles away and across a creek), people were still moving like mules.

So the race started late, which was good, because I didn't get to the start line until like 9:06. But then it didn't start until after 9:20, which I thought was ridiculous. The RD for Pretzel City Sport races looooooooooves to put on basically a comedy routine before the race starts. And at this point, I was not in the mood for comedy. 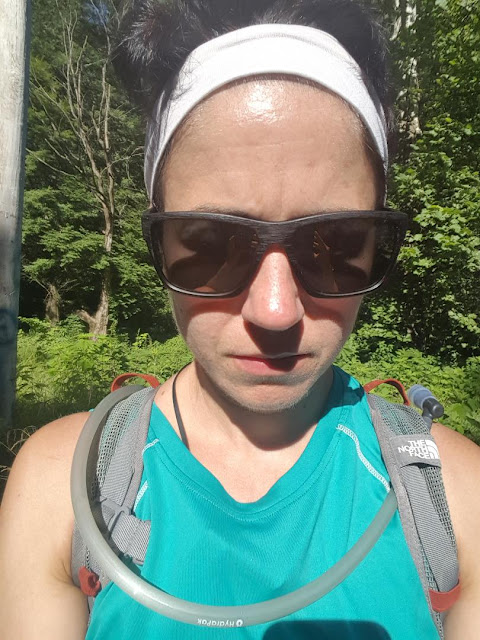 #1: THE LOUDEST WOMAN IN THE WORLD was standing behind me while I was in line for the bathroom. She was loud, her voice was jarring, and she would just not shut up! I got to hear all about her weekend, the poison ivy she got and how she treated it (even though she doesn't remember the exact name of the scrub), and how there was a race she was going to sign up for but then she didn't because they have bacon and ice cream at the finish line, and since she doesn't eat bacon and ice cream anymore, she felt like she wouldn't get her money's worth for the race. I just wanted to turn around and scream, "SHUT UUUUUPPPP!!!!!!!!!!!!!"

#2: To get to the starting line, there was a stream crossing. The stream was about 2.5 feet deep. There was a cable bridge to go across, as pictured. But the people moving across the cable bridge were moving even slower than the bathroom line! I thought everyone was being stupid because there were FIVE CREEK CROSSINGS advertised in this race. We were GOING TO GET WET. Plus, it was like 80 degrees. None of us were going to suffer from hypothermia! I waited in the loooooong line for the cable bridge for about 5 seconds, then I splashed across the creek in a huff. Several people followed me. (Looking back, I realize people may have been using the bridge because it looked like fun, and I appreciate that now that I am home drinking a glass of wine.) 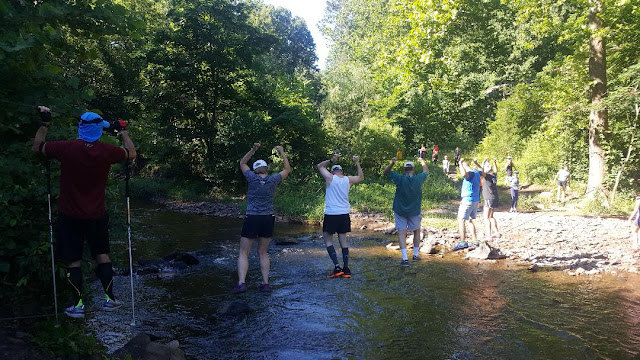 Okay, finally the race started. I had no goals for the race, just to be in the woods and have fun. In fact, I ran 9.5 miles the day before with my friend Kristen. I was not trained, I was not tapered, I was just here for the ride. But I was fueled by annoyance and needed to get that energy out. I did not want to get stuck behind someone running slower than me, so I started the race at an aggressive pace. "Aggressive" for me on this trail was like 8:30.

I found a good pocket. Soon I would pass several people and find a new pocket. No one passed me for the first half of the race. (I'm fine if people pass, in fact I prefer it. I don't need someone riding my ass.)

Random Question: Why do dudes at trail races smell SO BAD!? They just reek.

The course started out on a paved trail but then went to single track. Everything was basic standard PA trail until we came to a beautiful lake and then suddenly the trees got a lot taller. And the pine needles smelled so good. 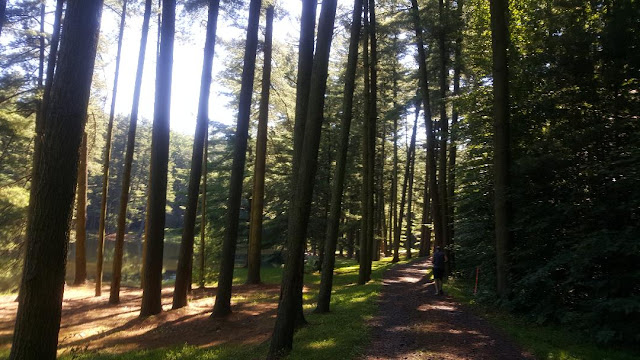 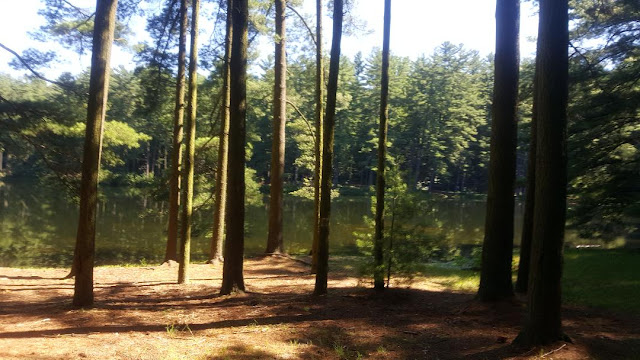 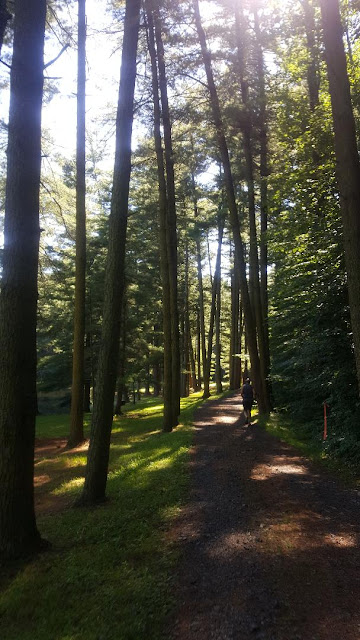 There's not much to say about the rest of the race. I kept up a challenging (for me) pace and finished in just under 90 minutes. I was happy with that. I listened to podcasts the whole time I ran.

As soon as I finished, I noticed there were free post race massages! And unlike the bathroom line, there was virtually no line! I went to the front of the queue and was now just waiting for someone to get done with their massage, then it would be my turn. 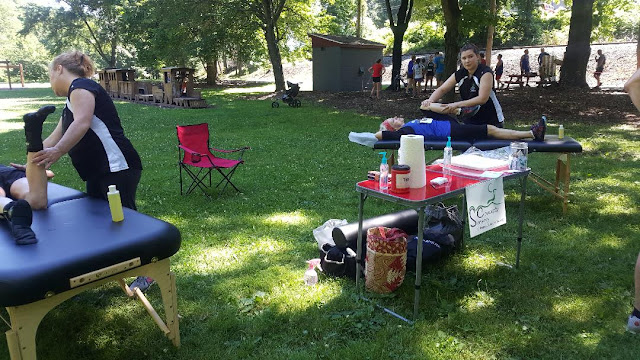 But when it was my turn, two young dudes walked up ahead of me. They didn't realize there was a line. The massage therapist told them I had been waiting.

"Don't worry, I won't be long," I told the boys. "I just need her to punch me in the lower back a couple times." (My lower back was sooooo tight.)

"Oh, I could punch you in the back!" one boy said.

"I could just drop kick you," the other one said loudly and laughed.

What do you all make of that, other than twenty-something-year-old boys are freaking stupid? 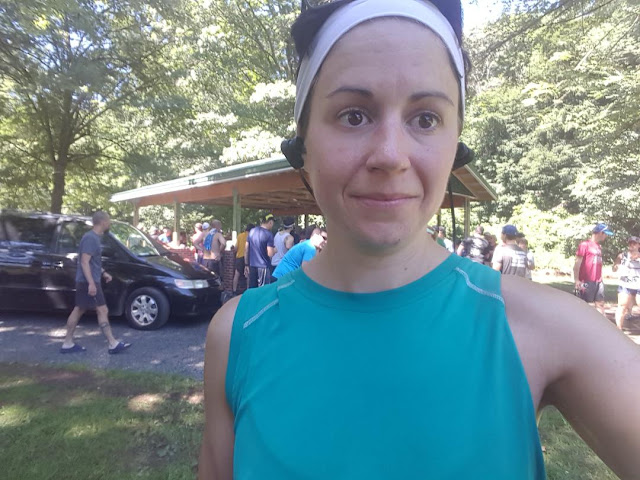 Did you ever get a free massage after a race?
Do you like to race on your birthday?
Would you enjoy a creek crossing (or 5!) during a race?
How would you have responded to those idiots!?
Posted by Meg Go Run at 5:30 AM