Middle of the Night Drama: Friday

I  woke up at 11:50 to the sound of Jelly screaming and scratching the closet door. That means he either wants attention, food, or both. I knew Paul had just recently gone to bed, and since he feeds the cats right before bed, I knew Jelly couldn't be hungry. I figured he just wanted some loving. So I picked him up, put him on the bed, and pet his chinny chin. Then I climbed into bed.

Jelly jumped down and started making noise again. I tried to ignore him but he was relentless. I thought maybe he hadn't eaten all of his food that Paul fed him, so I got his bowl out of the dresser. There were ten kibbles in there. Huh. So he ate most of it. Nevertheless, I put the bowl down. Jelly ate the food. I climbed back into bed.

Two minutes later I heard a THUMP in the kitchen, which is the sound of a cat jumping up on the counter. I knew Chrissy was sound asleep and Jelly never jumps on the counter, so who was it? I went out to the kitchen. It was Jelly. He was in the sink, scrounging for food. He was taking a page out of Chrissy's playbook! Why was Jelly so hungry!? I knew I was never going to get to sleep until I fed him, so I gave in.

I scooped Jelly off the counter, but when I scooped him up, he knocked some dishes off the counter that were drying. It was a tall glass, a wine glass, and a shot glass. They crashed to the floor and the wine glass broke. Jelly flipped out, dug all his claws into me (I got some gnarly scratches on my back, under my boob, and on my arm) and then jumped down.

"OWWWWW!" I cried. Then I heard Christmas jump down off his tower and trot into the kitchen. When Christmas gets scared, you have to distract him with a high pitched voice and food.

"Kisssssssyyyyy it's okay!" I chirped and he and Jelly followed me into the bedroom for food. "Paul, it's all good," I called to him. "Okay," he said sleepily.

The cats ate while I cleaned up broken glass in the kitchen.

And that was the middle of the night drama. 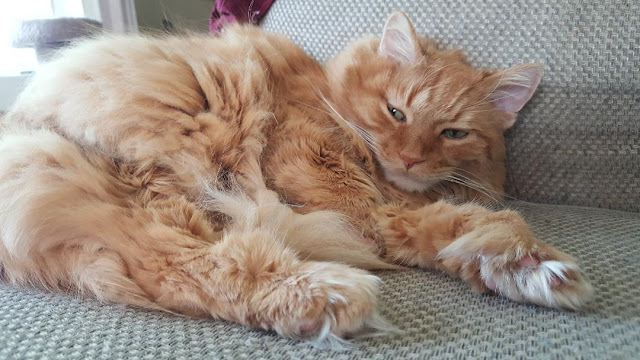 Jelly, I love you. But you can be a little bitch.

Do your pets ever create drama in the middle of the night?
Posted by Meg Go Run at 5:30 AM