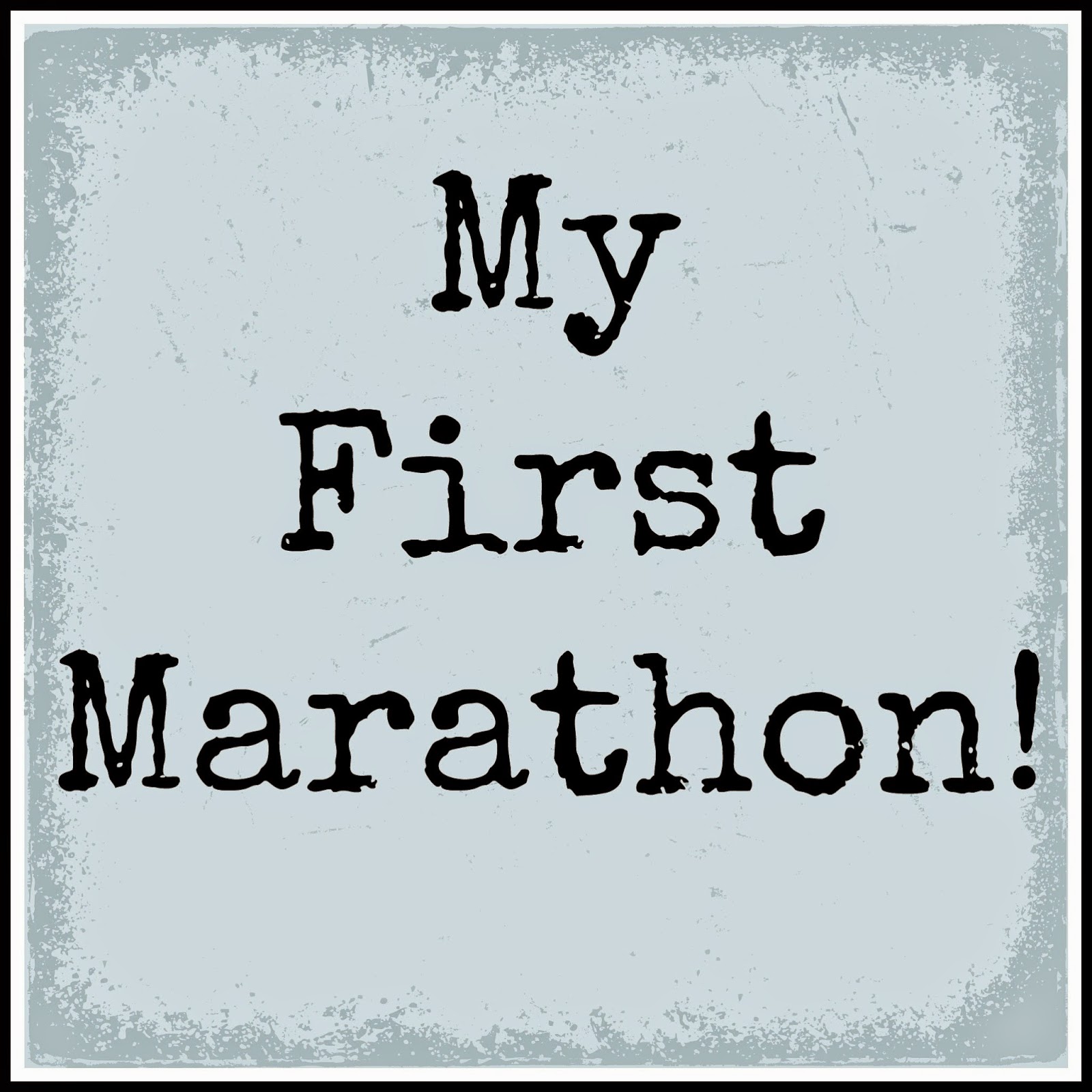 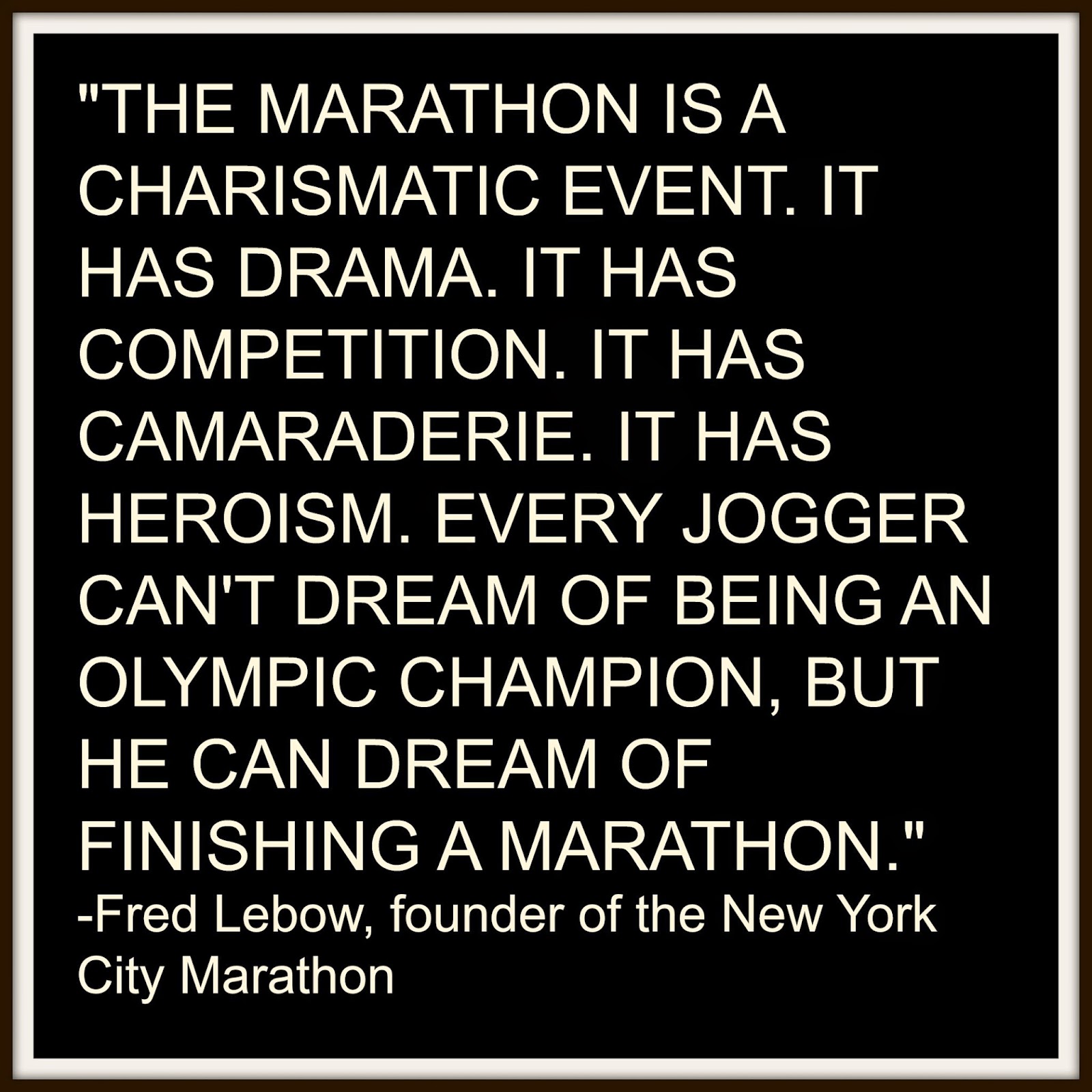 My very first marathon was the Harrisburg Marathon in November, 2006. I was 24 years old. I had been running "for fun" for many years before that. It was my future mother-in-law, Deb, that inspired me to run a marathon. She had run several, including ultras. Deb gave me my long run schedule and pretty much coached me through the whole process. Whenever I had a question, she had an answer!

When I was training, I never skipped a long run. However, during the week, I was on the elliptical more than I was running. For some reason, I thought I would get sick of running if I did it all the time!!!

- Relax... take deep breaths
- Stretch
- Eat carbs
- Watch stupid TV shows
- Drink carbs
- Read stupid books
- Eat carbs
- Drink water
- Lay around in your PJs
- Sleep
- Paint your toenails (what toenails!?)
- Look at your Christmas tree (It was the beginning of November, but yes, my Christmas tree was up!)


It was supposed to be very windy and rainy the day of the race. Nowadays, this would bother me. But at the time, I was just so excited to run MY FIRST MARATHON that I did not care in the least what the weather was like!

The morning of the race, I huddled with Paul and Deb under a storefront awning in front of the capitol building in downtown Harrisburg. All of the runners were trying to stay dry. It was sort of silly- we were going to be wet as soon as the race started! Deb gave me her red Nike hat to keep the rain off my eyes. I had fueled up with 2 Eggo Waffles (only 100 calories each) about an hour before the race. I can't believe that is all I ate!

When the gun went off, "It's the End of the World as We Know It" by REM blasted through the loudspeakers. How... uplifting!? My goal was to simply finish the race. I didn't have a Garmin, I didn't have music, I just had a cotton jacket (HA!), a Nike hat, and a big 'ol smile! 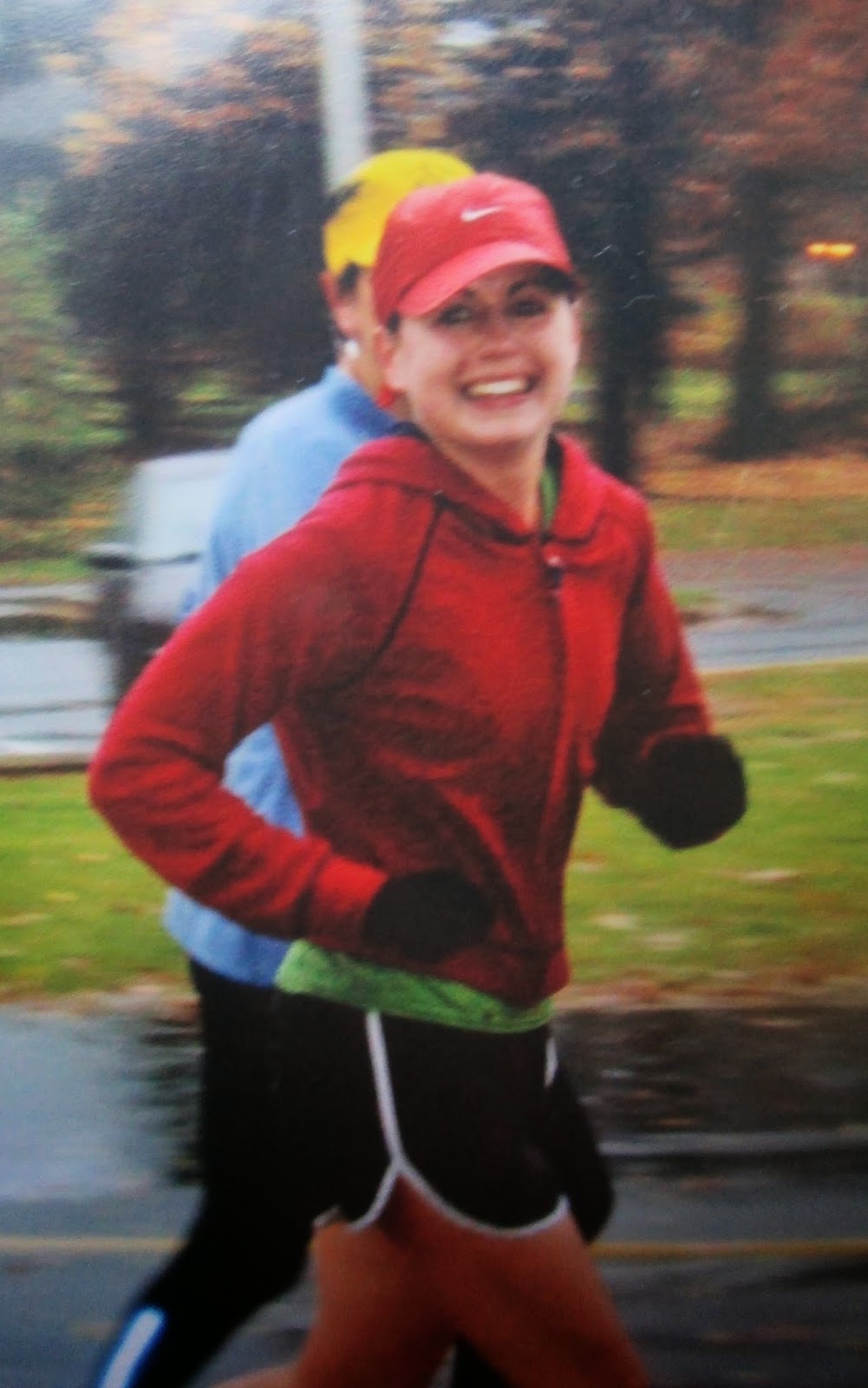 I will never understand why I wore that cotton jacket...

Most of the marathon course was along the riverfront in Harrisburg. As we ran along the river, the wind blew resistance against us. It was pretty brutal. I felt great in the beginning, but my legs were starting to hurt by Mile 11. The wind and the cold were making it hard for my muscles to stay warm. That, and I was such a newbie. 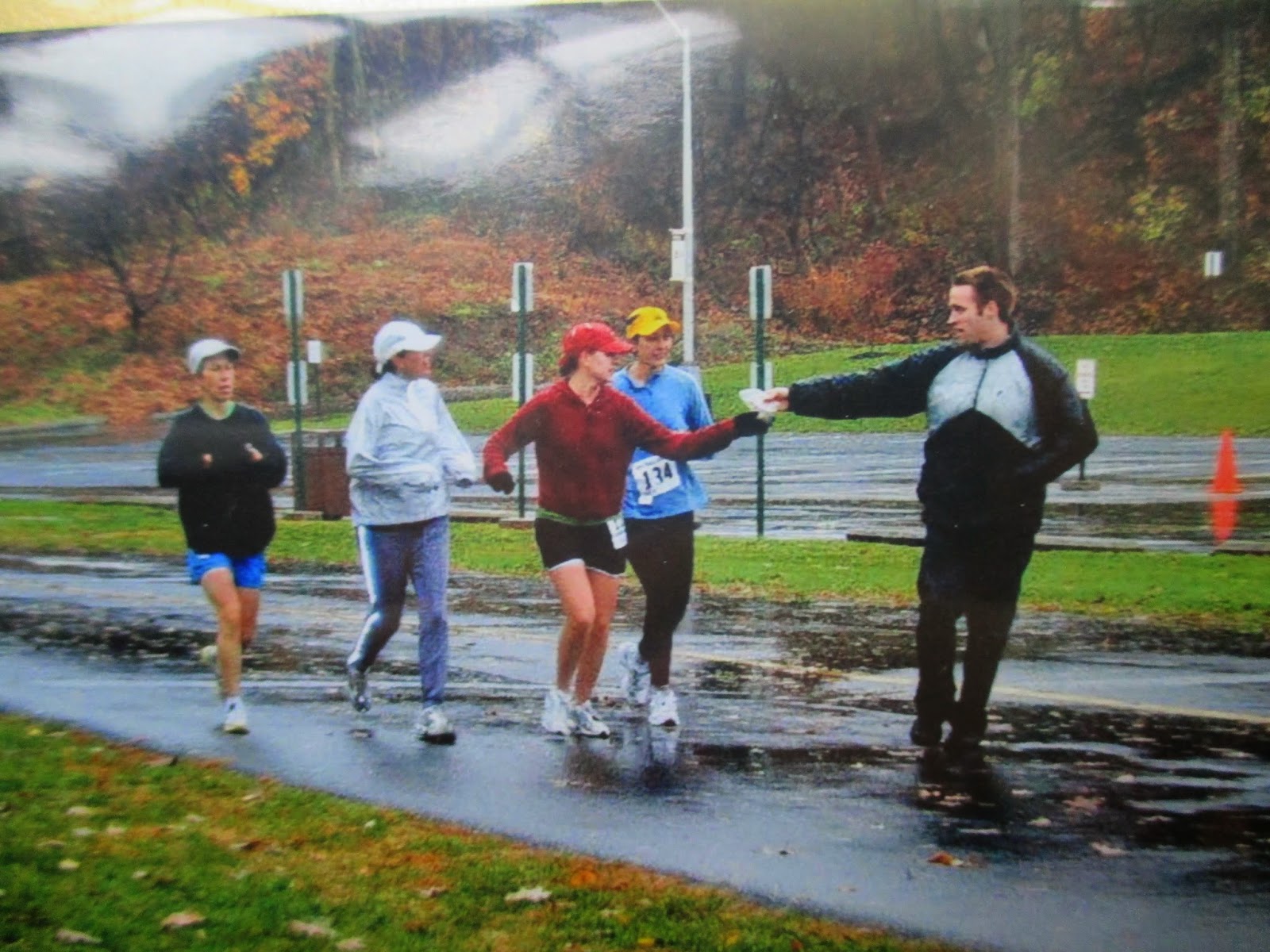 Paul handed me Cliff Blocks at Mile 14.
My legs were VERY sore at this point but my family was up ahead cheering me on!

It was not easy. I had to walk. I had to pee. And at one point, when I was all alone, I cried. The riverfront stretch to City Island (the finish) was the longest and hardest part of the race. Everyone told me to just keep my eye on the City Island Bridge and know the finish line was near. The problem was, it was too foggy and rainy to even see the bridge! 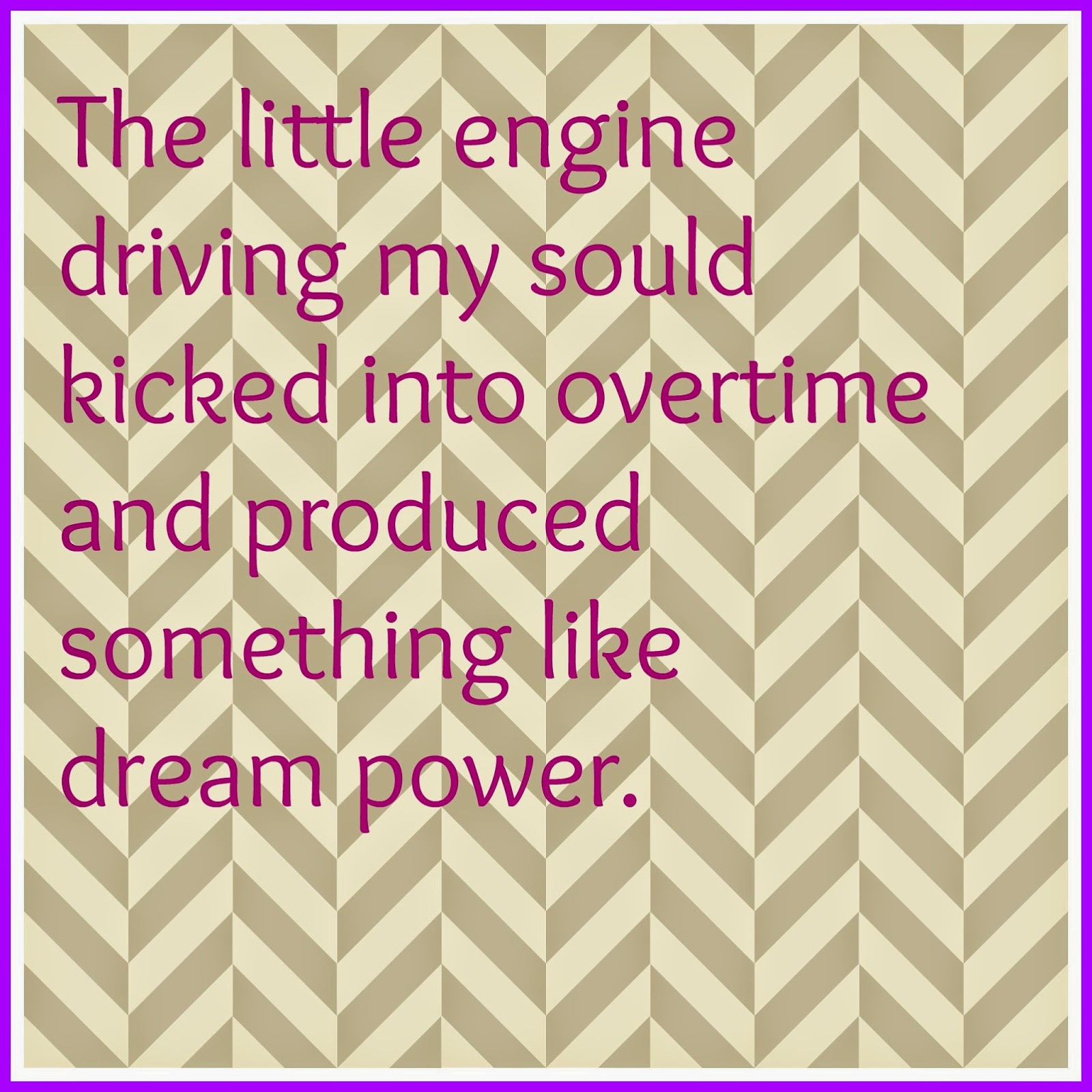 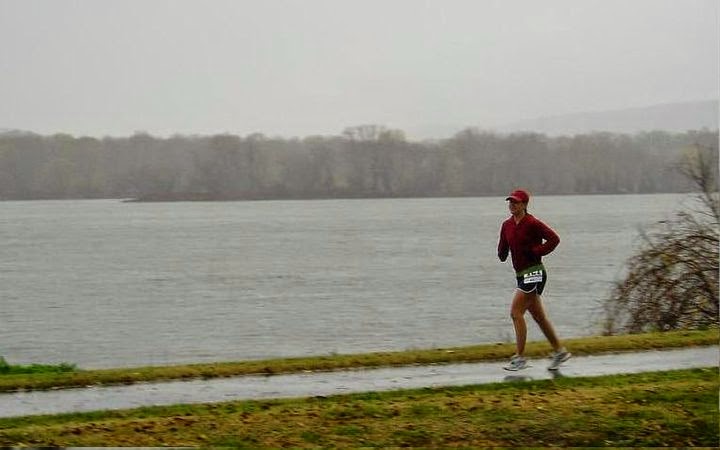 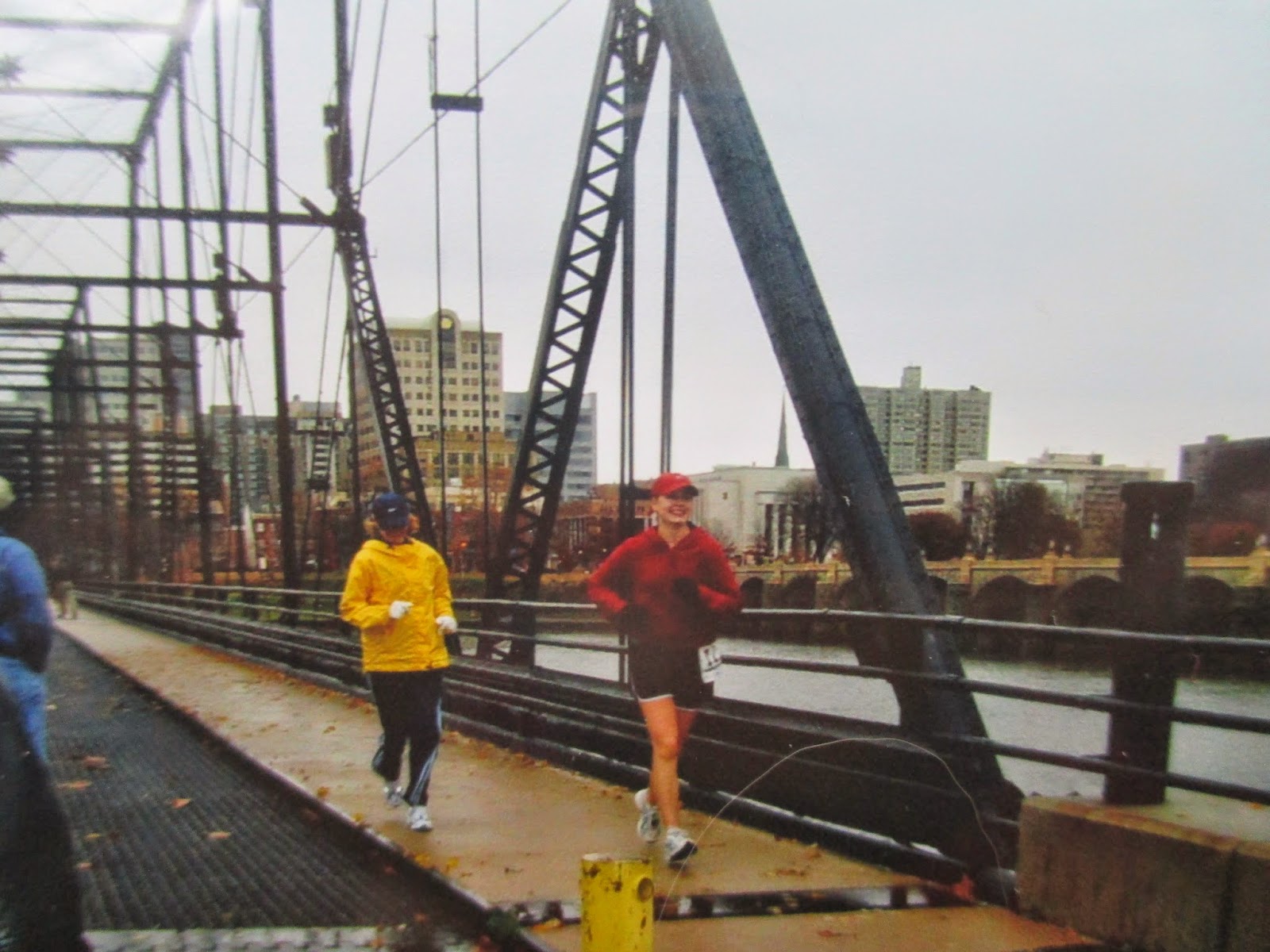 Crossing the finish line was exciting, but it was also RELIEF! My legs were shaking, but I had my medal and I had my foil cape. YES! 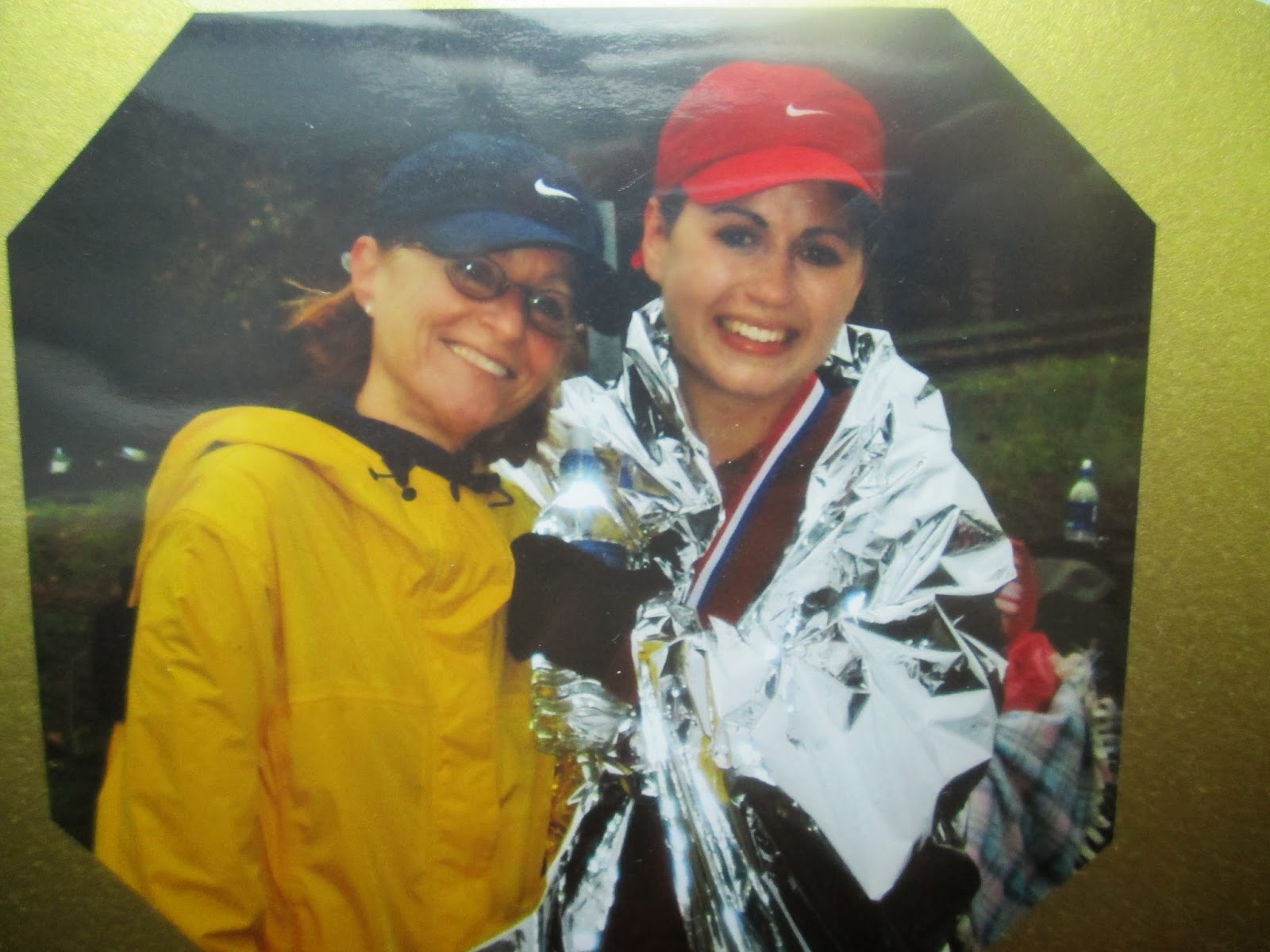 Coach of the YEAR! 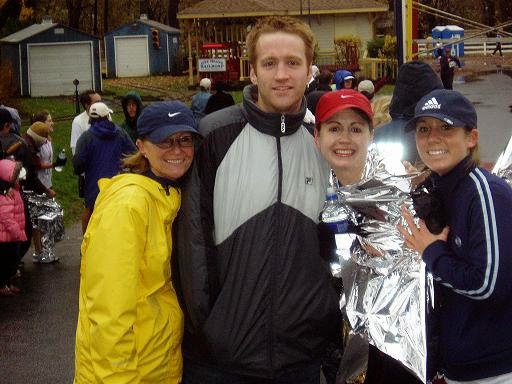 Deb, Paul, and Sherrie were my supporters! 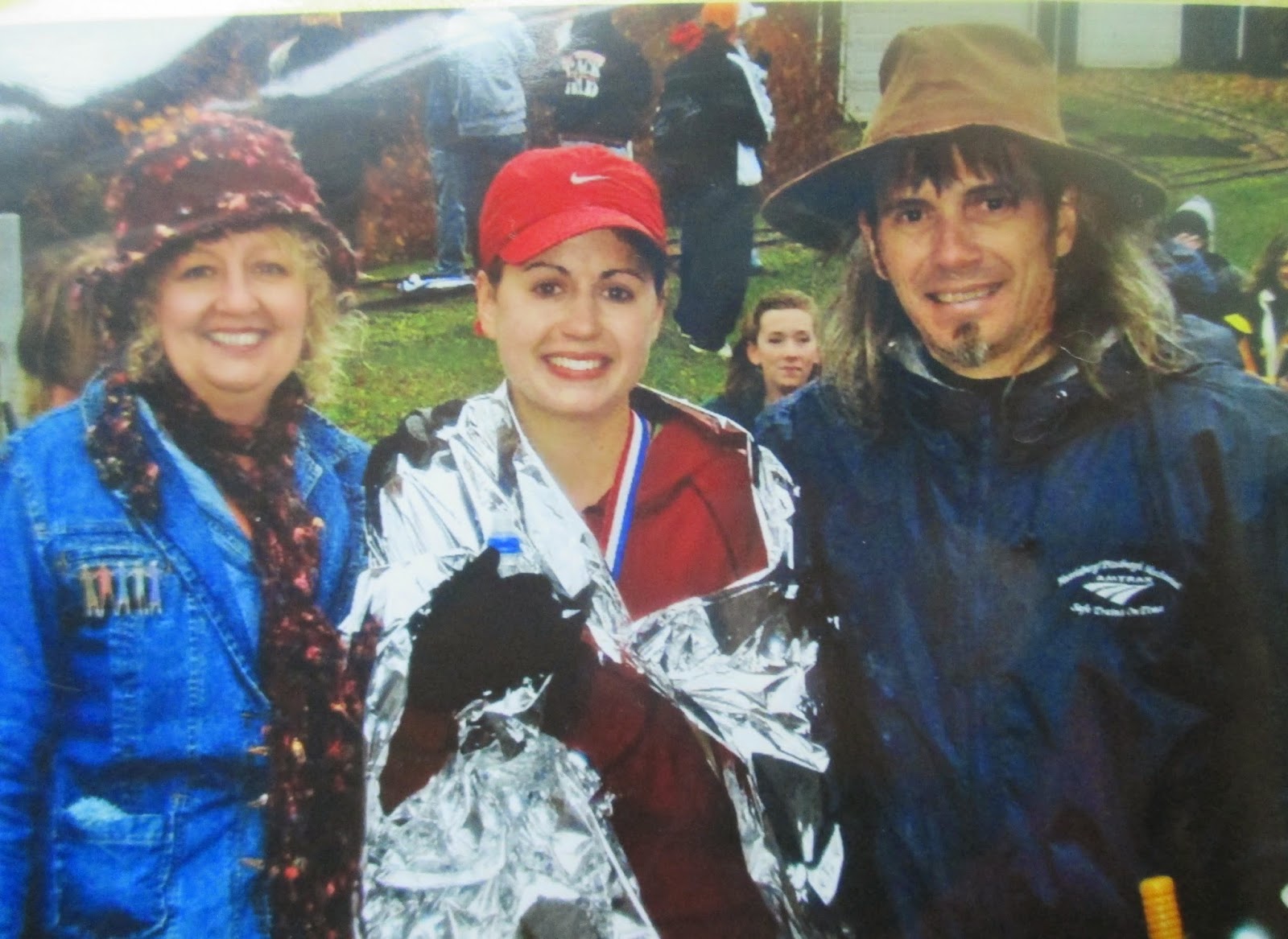 My parents came out in the wind, cold, and rain to cheer on their crazy daughter!

I was not cold while I was running, but as soon as it was over, I was FREEZING. Also, I could barely walk... 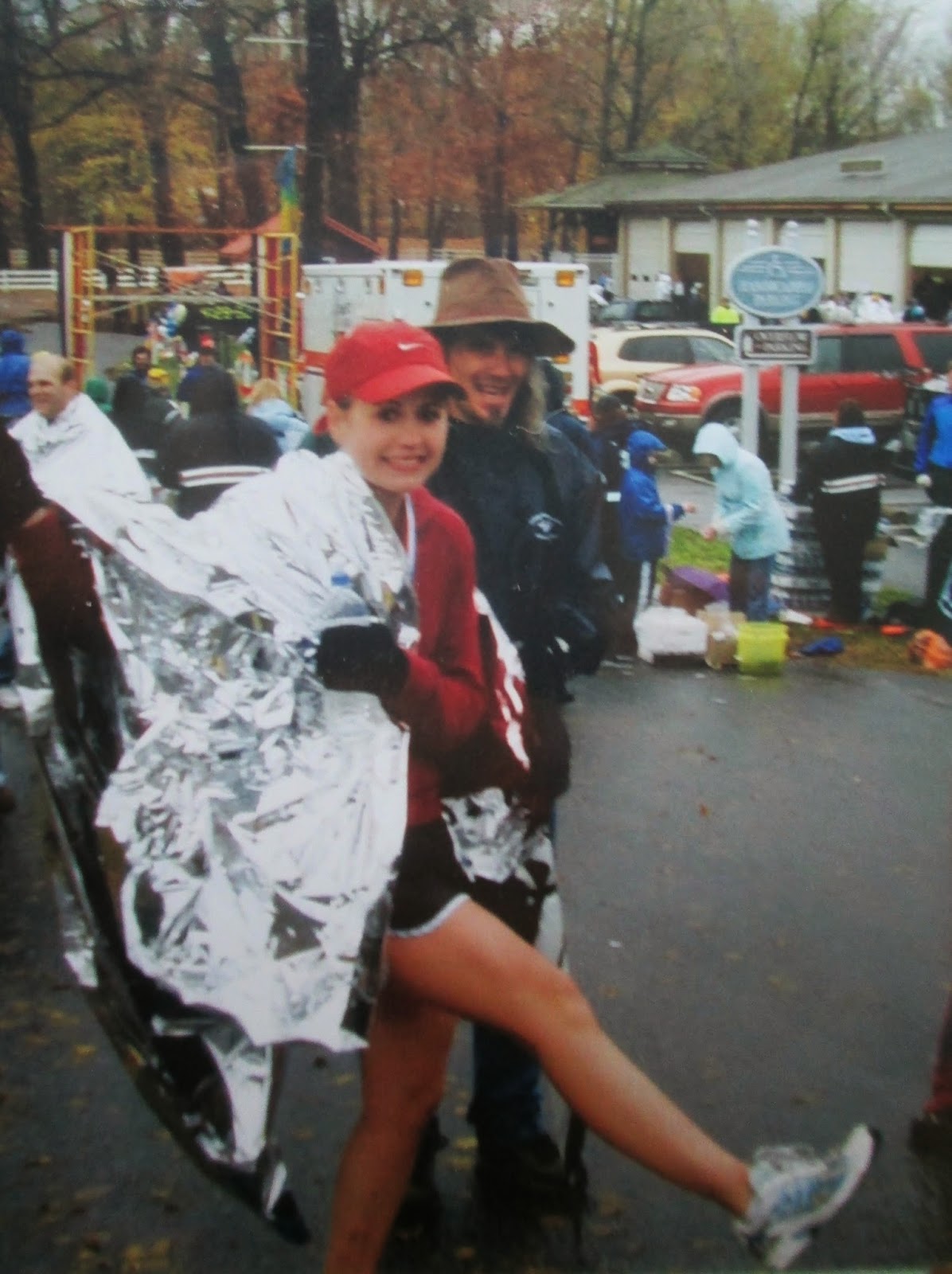 You just finished a marathon, kick up your heels! 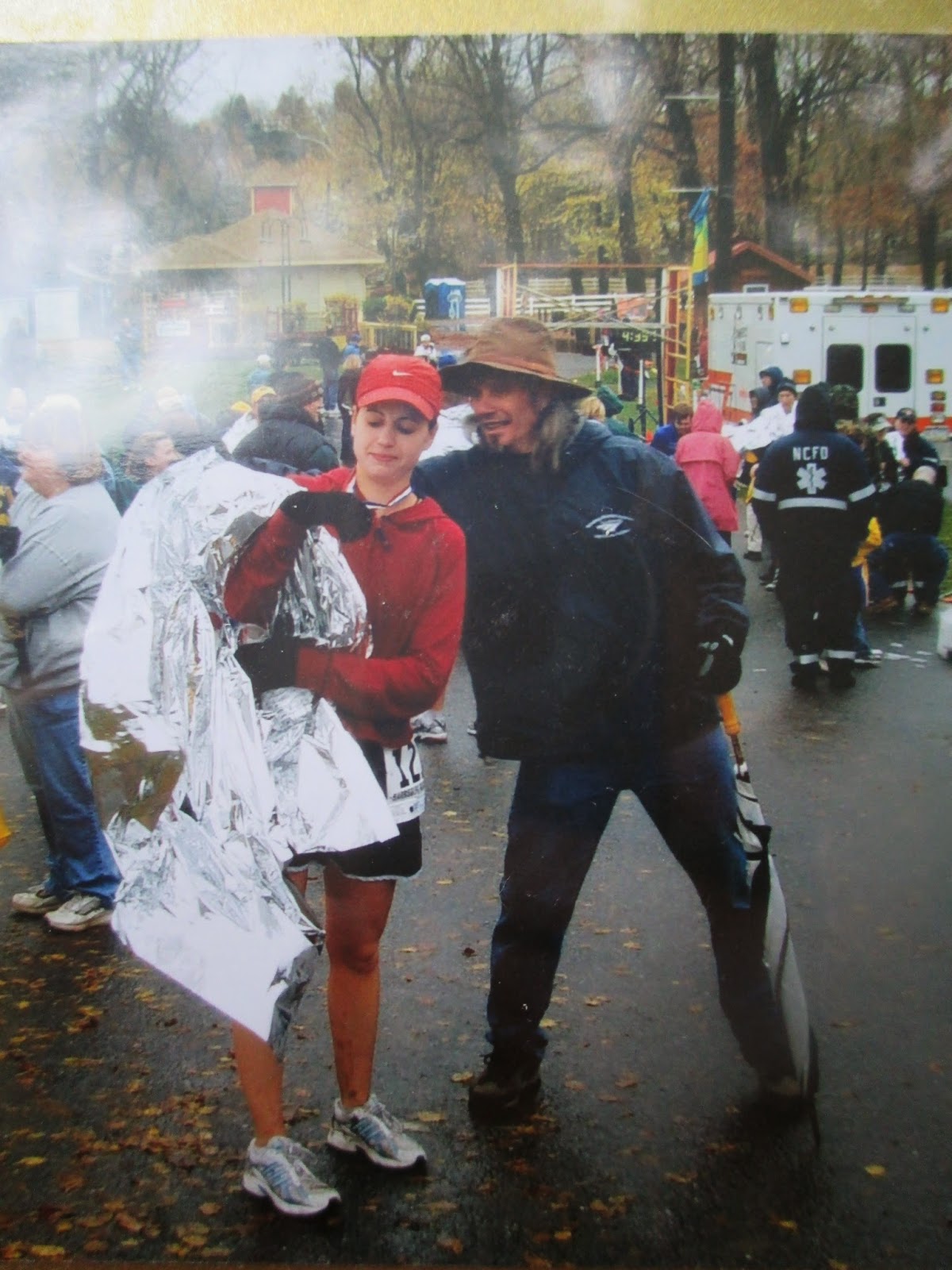 I think I will start a collection of these foil capes...

My parents drove me to my apartment (5 minutes away) after the race. Mom made me a tuna salad and they stayed until Paul came over to nap with me. Then we went to Paul's parent's house for a celebration dinner! 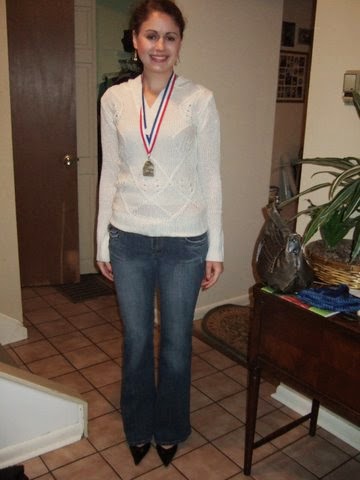 I wore my medal, of course.
And my Jessica Simpson spike heels.
26.2 miles was not going to keep me from looking FAB.
(24 year old me may have done this, 32 year old me would show up for dinner in PJs.) 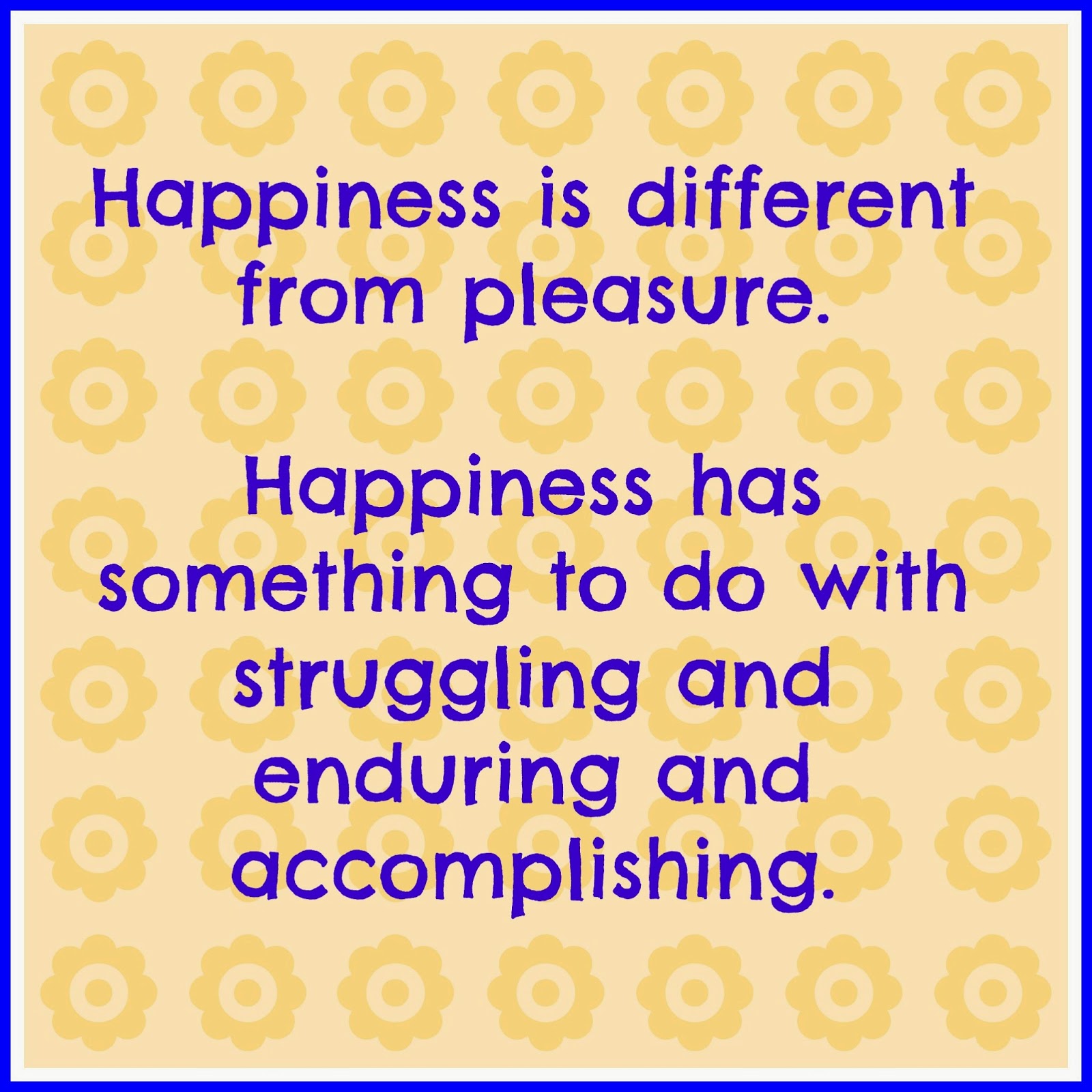 I was so proud of what I had accomplished. I also had the marathon bug! The next evening I called Deb to tell her I had already planned my next race. And so it began...

Do you remember your first big race?
Posted by Meg Go Run at 5:30 AM