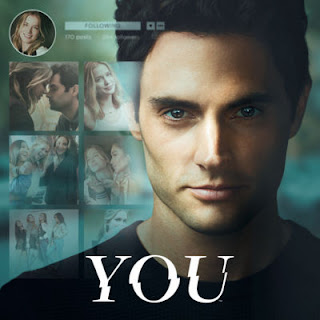 Have you watched the Netflix show You yet? If not, STOP READING THIS POST AND GO WATCH IT! There are only ten episodes, and I think most people would enjoy it. I repeat, do not read this post if you think you may watch the series because I don't want to spoil anything for you!

I feel like I should have taken notes as I watched the show, but I didn't think I would write a blog post about it. So here are just some random thoughts about You that I wanted to share...

1. I hated the character Beck. Her voice was so affected, she made terrible choices, she was all easy breezy... Actually, maybe I am just jealous of how relaxed she always was!?

2. I didn't like Paco either. Am I a terrible person?

3. Does Beck ever take off all of those bracelets? Did you notice she had a million bracelets stacked up her forearm? I swear she never took them off! I guess it's her "thing".

5. I knew Peach liked Beck well before it was revealed to the audience. And I do feel like I need to brag about this because usually I am not that good at picking up subtle clues in movies and television shows.

6. Beck could have easily escaped after discovering the creepy box in Joe's bathroom. Girl, just tell him you have diarrhea and get the fuck out of there! You could have easily been in the hallway/public area well before he discovered all that glass on the floor. Beck, you are SO STUPID.

7. Beck also had two chances to REALLY kill Joe down in the basement of the bookstore but she chickened out. That's what got her killed. Ladies, do not injure the motherfucker who is stalking you. KILL HIM!!!! Stab him with the typewriter keys FIVE times. Hit him over the head with the hammer TEN times.

8. Was Candace real at the end or was Joe imagining her!? Inquiring minds want to know...

Tell me your thoughts on You!
Posted by Meg Go Run at 5:17 AM