On Saturday, I ran the Ultra Race of Champions 25k (though it was actually 17 miles!) in the Blue Ridge Mountains of Virginia.

A little background: I signed up for this trail race "for fun" and because it looked beautiful. I didn't train much for the race. My longest run was 16 miles nearly a month beforehand. I eased up on my running for about two weeks after that due to my left hammy bothering me. The week before the race I did very little due to a stomach bug. But I wasn't too worried. Like I said, this was just supposed to be a fun run in the woods!

I slept fairly well the night before the race at our hotel in Charlottesville. Around 7:00, Paul and I headed down for the hotel's free continental breakfast. There were a lot of different foods to choose from and I settled on this: 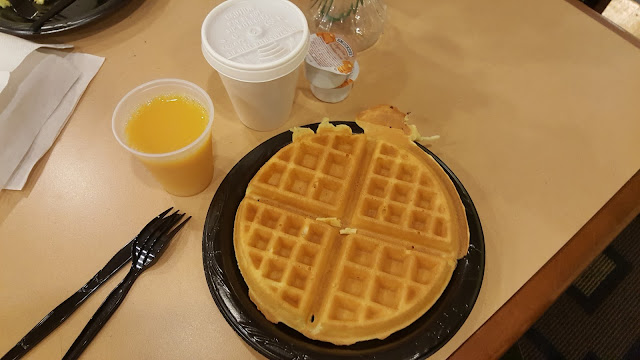 Then we drove an hour to Skylark Lodge in the Blue Ridge Mountains, which was the start/finish of the 25k portion of the race. (There were also 50k and 100k runners which started earlier at a different location.) The drive through the mountains was beautiful, and the grounds of Skylark Lodge were just stunning. 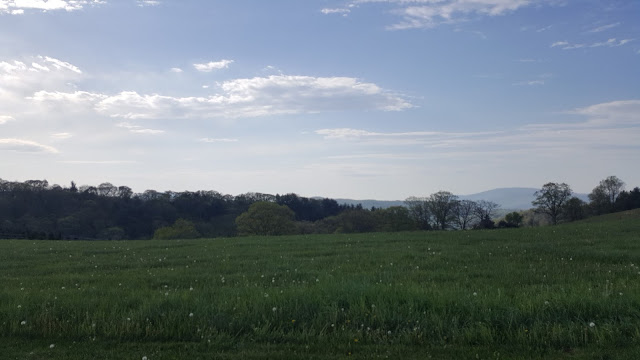 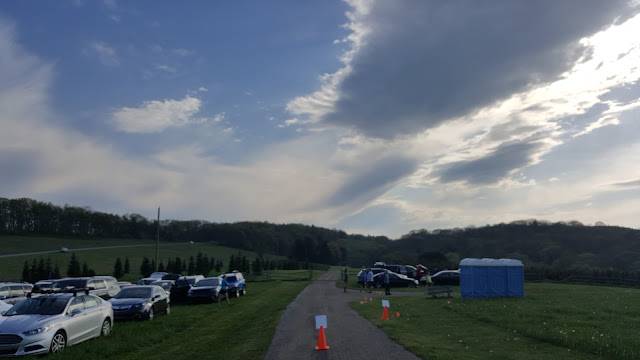 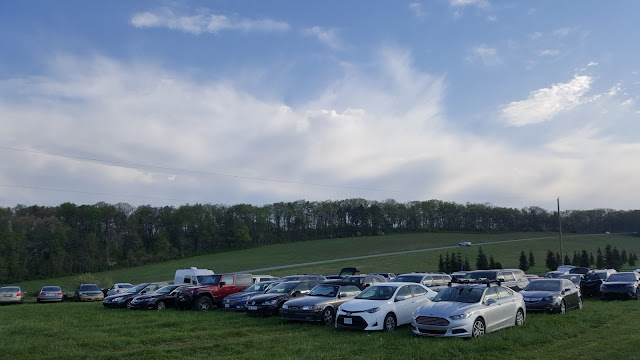 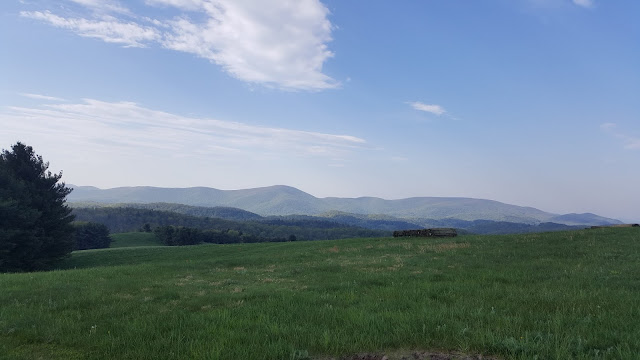 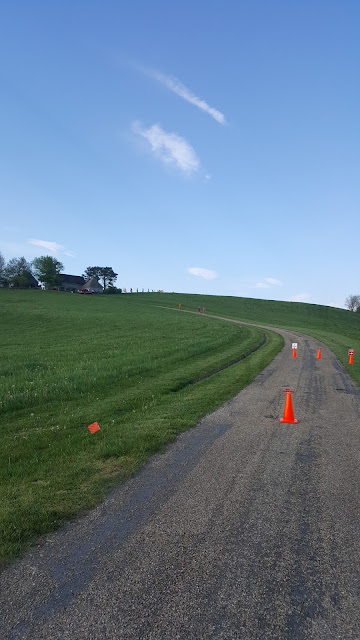 We had to walk up this hill to get to packet pick up
and the start. 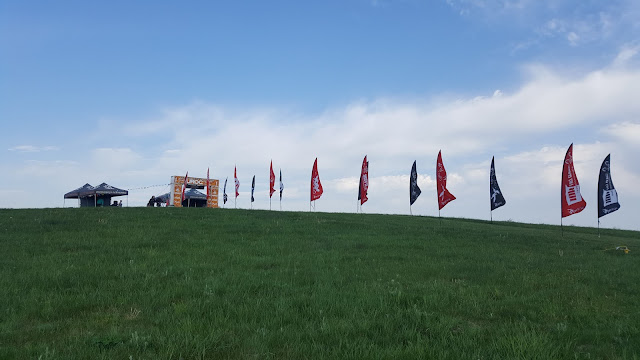 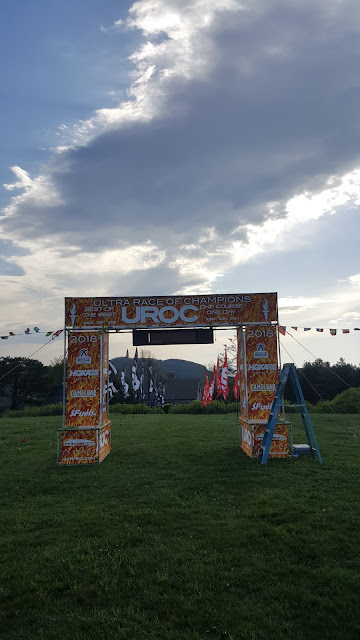 Before the race started, there was a short pre-race meeting that outlined the course for us. I listened and took a picture of the course map with my phone. It turned out that the course was extremely well marked so knowing which way to go was no problem.

Here's how the race went!

Miles 1-1.5 = We ran through the grounds of Skylark Lodge. There were lots of hills and fields but it was gorgeous! 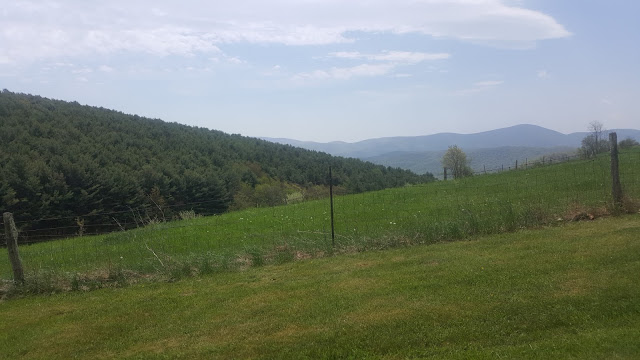 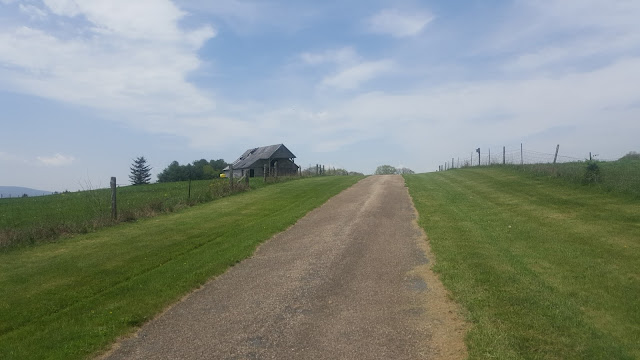 Miles 1.5-3.5 = Two road miles on the Blue Ridge Parkway. There were rolling hills, but I settled into a comfortable, easy pace. I had a feeling the two road miles were going to hurt worse on the way back.

Mile 3.5-4.5 = Up a rocky fire road. I passed a lot of people during this mile. I have found that on trail I am normally strong on the uphills but "dainty" on the downhills. I was sure everyone I passed would fly by me at the next downhill. There was an aid station at the top of the hill. I drank a cup of Gatorade. (I wore my hydration pack for water.)

Mile 4.5-6.5 = This section was very beautiful. It was single track. Some parts were rocky and some parts were just flat with pine needles. It was either flat or a gradual downhill, which meant I easily picked up the pace on these miles because it felt natural.  There was another aid station here where I drank more Gatorade. Then the volunteers directed me across the road for a loop. 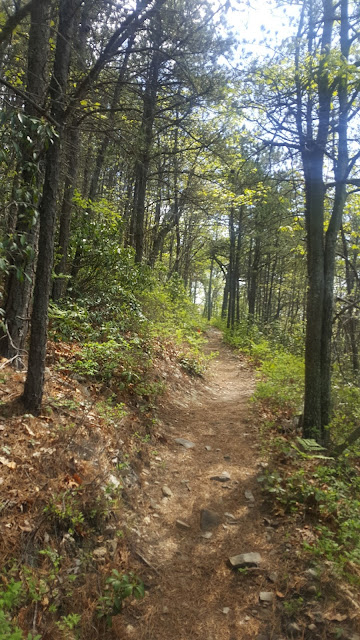 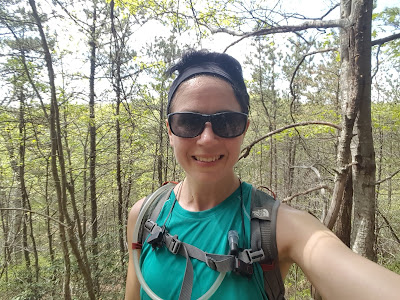 Mile 6.5-10.5 = The loop. Oh boy. The loop started out easy. The forest was absolutely stunning and I ran by a stream for awhile. But then around Mile 9 there was a climb. Switchback after switchback. My legs became absolute noodles very, very quickly. I had completely lost the mojo in my muscles. At this point, it started to get very hot too. For 1.5 miles, I put one foot in front of the other and got myself up those hills. I was spent. And there was six miles to go... When I got back to the aid station, I drank two Gatorades. I could taste the salt on my face.

Mile 10.5-12.5 = Now I was going back the way I came the first time. But now it was a gradual, rocky uphill rather than an easy gradual downhill. I had to walk a lot here. I did not trust my legs to keep me upright over the rocks. People passed me. I didn't care. My legs had nothing left. I ate a pack of sports beans. At least I could get 100 calories in my tank. Then I gulped 2 Gatorades at the aid station.

Mile 12.5-13.5 = Back down the fire road that I so effortlessly ran up earlier in the race. I was out of gas and I knew the asphalt was coming soon. I needed to break out the big guns... A NANCY GRACE PODCAST!

Mile 13.5-15.5 = Blue Ridge Parkway. Asphalt. Hills. HOT SUN. This part was rough. Every joint in my body felt creaky now that I was on the road. My feet hurt. I got a little lazy and walked at some parts. I could have run but why put myself through that pain!? This race was for fun. Others were walking so that sort of gave me permission...

Mile 15.5-17 = Back through Skylark Lodge grounds and to the finish line! There were a lot of hills here and I walked up them all. It felt good to be DONE! 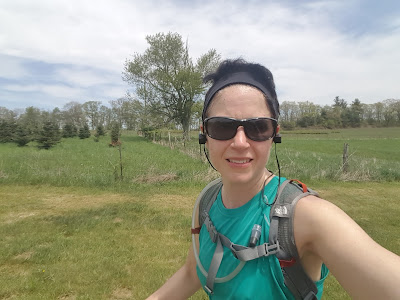 There weren't many spectators at the finish line, but that's the way trail races go. Paul was there and cheered for me! I rang my bear bell as I ran through the flags. Yes, I wore my bear bell the whole race! My momma didn't raise no fool! 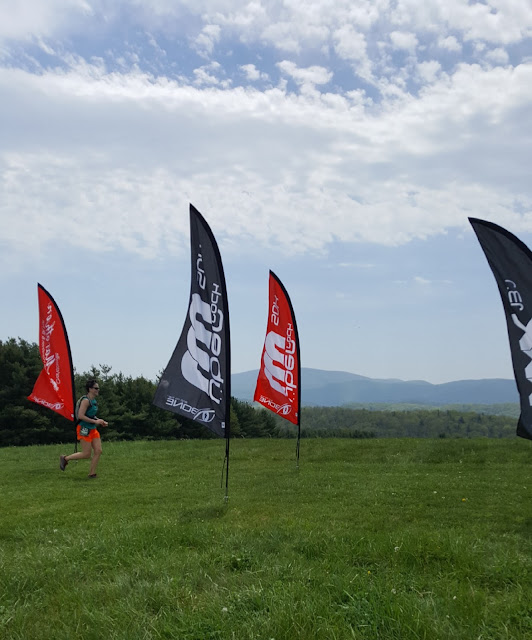 I finished in 3:17. I was hoping for around 3 hours to beat the heat but all those switchbacks killed me. There were a couple spots I was lazy, so I probably could have finished about 5 minutes faster, but I just didn't feel like pushing myself to my limit that day. 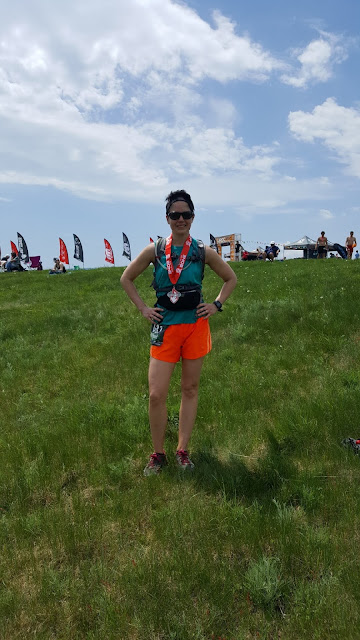 Since Paul waited for me the whole time, we left right after the race. I was so salty, as in, I could rub salt off my body. I drank quite a bit during the race but it was just so hot out- in the 90s.

I was very sore right away after the race and the next day. By day two, I was feeling a lot better. The good news is, my hammy didn't bother me at all during the race!

A couple days later, I checked the race results and saw that I was 18th overall and the 7th woman. Not bad! The first woman finished in 2:35. DANG!!!!

All in all, it was a tough race, beautiful course, and I am proud of myself for finishing something difficult while still having fun.