My thoughts on 13 Reasons Why (Spoilers, obviously.) 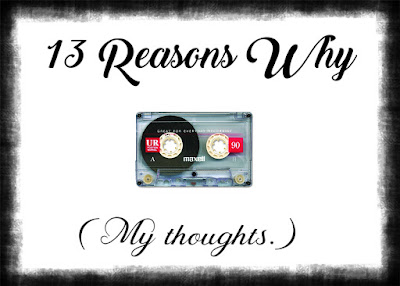 A few months ago, I binge watched 13 Reasons Why. I watched the last seven episodes all in one night. Then I watched it again because Paul wanted to see it. It was very interesting to watch the show a second time because I definitely picked up on things that I didn't take note of the first time through.

I'm going to give you my thoughts. I'm a little nervous to talk about this because suicide and depression are serious issues and I don't want to say the wrong thing or come off as ignorant. If I offend or say something incredibly stupid, let me know (politely please!) and I will do better.

Also note that all of my thoughts are coming from an adult who has never been depressed or suicidal. Sure, I had some bad high school experiences but for the most part I cannot relate to the characters in this show at all.

The last thing I want to say (and I'm sure you will gather this from reading my post) is that I can definitely see every side of every opinion on this show. I go to reddit and read all different viewpoints and I am nodding along and agreeing with most of them- even those that are contradictory. Maybe that means I have not totally thought through all of the issues enough to have landed on a steadfast opinion, or maybe that means it's a complicated issue and we can feel all sorts of things about it. Who knows?

Wow, my introduction was practically an entire blog post all in itself! Time for the good stuff... (I'm just doing this in list format because the thought of organizing all of this coherently is daunting to me.)

Let's start with the characters...

Hannah- Hannah annoyed the crap out of me. She was so dramatic. Everything was about HER. She was mean to so many people when she didn't have to be. I thought it was COMPLETELY effed up that she wanted to blame everyone in her life for her suicide when ultimately, taking her life was her decision. On the other hand, I do realize some absolutely HORRIFYING things happened to her, but most of the people she blamed for her suicide didn't even deserve it.

Tony- THE. MOST. ANNOYING. CHARACTER. And it's hard to be more annoying than Hannah. First of all, he looked like he was 35. All he did was drive around and act mysterious. I don't understand why Hannah gave him the tapes to distribute and why he was so hell bent on making sure everyone on her list got to listen to them. Some back story on their relationship would have been nice, but alas, he wasn't on the tapes. Or was he? Oh my gosh, I can't even remember!

Clay- I liked Clay, which is a good thing because he's the main character. His scar was messed up and his face was a weird yellow color (bad makeup/lighting!?). I don't understand why Clay liked Hannah. I didn't find Hannah to be very likable and she was mean to him. Clay did not deserve to have a tape. AT. ALL. Hannah was mean to him in life AND in death.

Jessica- For the most part, I liked Jessica's character and the actress did a good job acting like a high school aged kid. I felt really bad for everything she was dealing with. She also didn't deserve a tape. Girls have falling outs all the time. If anything, Jessica's story reminded me how common sexual assaults are. I can't imagine having to deal with that, let alone deal with it as a 16 year old.

Justin- This is one of the characters that I really felt bad for because of his home life. Showing the up skirt picture to his friends was not cool. "Letting" his friend rape his girlfriend was even worse. I don't understand why Justin didn't get a bunch of people from the party to pound on the bedroom door and/or bust through. He just went downstairs and sat on the couch... But even though his character was flawed (I guess all of the characters were flawed) I still felt a lot of empathy for him.

Alex- I think Alex was my favorite character in the whole show! I did not see his suicide coming the first time around, but then of course when I re-watched the show, I saw the signs EVERYWHERE. I loved his hair and how he dressed. I hope he makes it and is featured in season two.

Courtney- I loved how Courtney dressed too! Even though she wasn't a nice person, I still enjoyed her character.

Ryan- He was an interesting character. I don't think what he did was THAT bad, especially since no one knew Hannah wrote that poem.

Zach- An example of someone who was just trying to be nice to Hannah and she was really shitty to him! He did NOT deserve a tape. Hannah, you suck so much.

Marcus- What a freaking douche and a predator! I hated Marcus.

Tyler- This boy has some problems. What's he going to do with all of those guns? I'm very interested in his story line for season two.

Sheri- This poor girl made a TERRIBLE decision. I hate what she did. I guess it's an example how teenagers don't think things through... I'm still not sure what she "did" to Hannah. Hannah wasn't driving, she wanted to call the cops, and she DID call the cops. She did everything she could do and it wasn't her fault. Sheri on the other hand... I am glad she admitted to her crime in the end. I hope her life isn't ruined forever for a stupid decision she made as a teenager.

Bryce- I can barely stand to look at the dude. Can I be frank? I wouldn't mind killing him with my bare hands. He is disgusting and a HORRIBLE, HORRIBLE person that needs to go to jail for a long time. He's one of the few people on the tapes that actually deserved a tape.

Mr. Porter- Okay, on Reddit I read about how Mr. Porter didn't do enough to stop Hannah and I also read about how he did all he could do in that short amount of time and that Hannah went in there dead set on him not helping her. (I mean, she recorded it for a reason.) I can see both sides. But I lean toward blaming both of them. No, Mr. Porter didn't say the exact right things but Hannah did not go in there with an open mind. I blame Hannah mostly, but I know I am biased because I find Hannah so horrible to begin with. The Hannah/Mr. Porter scene is the one that intrigues me the most.

All of the high school "extras" looked way too old to be in high school.

I couldn't watch Hannah slit her wrists. I had to close my eyes and cover my ears. It was hard enough to hear her deep breathing. I didn't like it.

I cried twice in the show.... When Hannah's mom painting one of her fingernails blue and when Hannah's mom found her in the bathtub. Kate Walsh was AMAZING in this series.

So the biggest controversy about this show is that some say it glamorizes suicide and will cause more teenagers to kill themselves. I have read research about how when suicides are reported on, there is a spike in suicides! If this show truly does cause more people to kill themselves, then it is a very bad thing. But if it opens up dialogue about a tough issue, then I would say it is a good thing. I guess I sound wishy washy about the subject. But normally, I do think it is a good think to be open and honest with teenagers about tough issues. But if something causes more suicides, then it is not worth it, right? (I'm not saying this show has caused suicides, I don't know the data.)