I'm not cut out for this whole "menstruating" thing 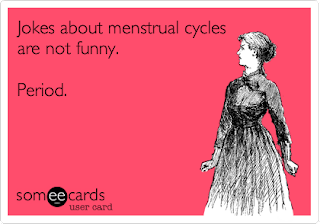 Yesterday was weird, and it really wasn't the greatest day.

First of all, I got my period that morning, and on the first day of my period I basically feel like I have the flu. Tired, back ache, other aches, light headed... It's not fun. I went to the gym to lift anyway. Not a good idea. I felt very apprehensive and "fluttery" as I was lifting. I think from now on, unless I'm dying to go for a run or something, I'm not going to workout at all on the first day of my period. It is just not enjoyable.

I was all proud of myself because last week I stocked up on lots of toiletries so that I could keep the things I need to shower in my gym bag. Sounds nice, right? Except I forgot to pack one of the most important things... UNDERWEAR. I was not going to work in a skirt without underwear, so I had to quick go home after the gym to grab a pair. I only ended up being two minutes late for work since I saved some time by not putting on makeup. Don't worry, I put it on at school. I didn't want to be scaring students on the very first day!

There was just enough time to drink a cup of coffee before my first class arrived. As I was assigning seats, we got an announcement from our principal that all teachers were to check their emails for an important message. It turns out that our students were going to be dismissed at 10am (one hour into the school day) due to an "air quality control" issue. School would be closed Wednesday as well.

Teachers were allowed to either stay in the building or go to another building in our district and do work. I wasn't really sure what work I'd be able to do in another building, so I just stayed in my room. Apparently we were "safe" as long as we don't have allergies or some sort of immunodeficiency.

So I spent the afternoon picking out chorus music and making copies. Definitely not what I thought I'd be doing on the second day of school! I was so tired though. Sleepy tired. All I wanted to do was lay my head down on my desk and take a nap.

After school I taught piano lessons, but as soon as I was done, I ate two bowls of Honey Nut Oaty O's (generic Honey Nut Cheerios) and went to bed when it was still light out.

My period really kicked me in the ass. 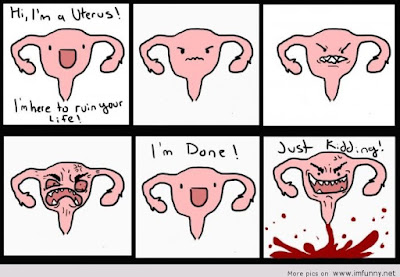 Does mold freak you out?
Did you ever forget underwear?
Does your period kick you in the ass?
Posted by Meg Go Run at 5:30 AM