On this season of Big Brother, there is a contestant named Paul who I have liked ever since the beginning of the season. (Note: I will call him BB Paul so you are not confused between him and my husband Paul.)

You get the picture?

Oh, here is BB Paul with his beard and without his beard... 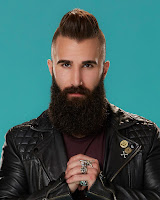 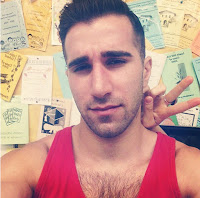 So Paul and I have been weaving BB Paul's Friendship/Pissed catchphrase into our vocabulary. The other night on the way back from DQ, I rolled the car window down and yelled "Friendship!!!" out the window as loud as I could. I really like Blizzards. When Chrissy peed on the TV stand out of spite because he was hungry, Paul shouted "Pissed!" (But not too loud as to scare Chrissy.)

Okay, onto the "Paul's Health Update" portion of this post...

When last I left off, I shared that the radiation and chemo he went through this past fall was really working, and the new tumor growth they were targeting was GONE (it was now dead tumor cells) and the part of his tumor that is inoperable got a little bit smaller! All SUPER good news. Lots of friendship. We felt like we had a new lease on life when we got that news!

Where we went from there was that Paul continued chemo for a couple months- 5 days on, 25 days off. Not too bad. He wrapped up his last round of chemo in July.

That brings us to Thursday. Paul had an MRI and an appointment with his doctor at Hopkins. I wasn't nervous about this appointment until the day before... when I realized I would be the one taking him. Originally, his dad was going to take him because I had work and we're not allowed to take off during the first week of school. But due to Moldageddon 2016 (aka air quality issues at the school!) I ended up having off work on Thursday. So of course I would take Paul to his appointment. THAT'S when I got nervous.

I was really nervous to go to the hospital again. I mean, you never know what kind of news you are going to get when you go there. We have gotten our fair share of crappy news and of course good news as well. It's one of those places where when you walk in, you never know if your life is going to be completely changed by the time you walk out.

First he had an MRI. Luckily, he wasn't nervous for his MRI because he hasn't been having seizures lately. Normally, MRIs are like seizure machines for him, but this time he wasn't worried. he even swiped me a pair of MRI socks I love... 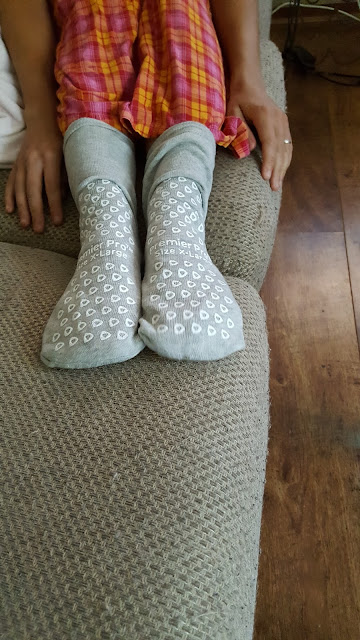 He accidentally got the Premier Pro Extra Large! It's all good, I don't have any in grey yet. 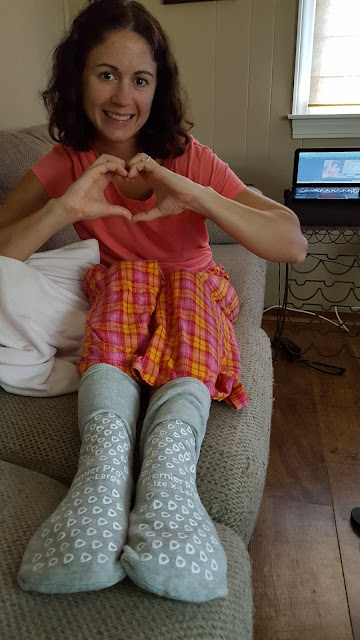 MRI socks = FRIENDSHIP!!!!
Ps. Doesn't this pose/angle make me look like I am missing part of my body????

Then we waited for his appointment with his doctor who would discuss the MRI results with him. I have actually never met this particular doctor because he was one he saw during radiation and his dad usually took him to those appointments. Since Paul was used to seeing the doctor himself, he said he was okay just going in alone.

I felt selfish for not going in the appointment with him, but he truly didn't care. I know if he cared, he would have asked me to come in. I don't like seeing the brain scans- in fact, I can't look at them. They make sick in the stomach. (Because it's his brain.) I also don't like waiting to hear news from a doctor. I just can't take that shit anymore. So finally Paul went into his appointment and I stayed in the waiting area. I tried to read my book, but I kept reading the same page over and over again because the words were not computing.

When Paul came out to the waiting area twenty minutes later, I asked, "Friendship or pissed?"

I was not convinced. Paul tends to see the bright side of things. If his tumor had grown back, but had only grown a LITTLE bit, he may have called that friendship. So I fished for more answers.

"Is the tumor still gone?" I asked.

I held it together until he said that his doctor wanted to start lowering his meds since he hasn't been having many symptoms. That's when my tears started flowing. Paul is on so many meds. They have never been reduced. Only increased. Until now.

THIS IS SUPER DUPER FRIENDSHIP!!!!!

Tell me something that is going on with you right now that is FRIENDSHIP!
Posted by Meg Go Run at 5:30 AM