It's time to stop saying "atheist" as if it is some horrible thing. 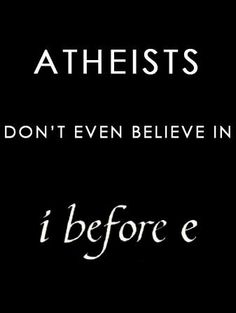 This is NOT a post about the DNC, presidential candidates, or the 2016 election. But it was inspired by this weekend's news item in which some DNC emails were hacked.

Among the thousands of leaked emails, there was one from chief financial officer Brad Marshall in which he suggested that it would be beneficial in the primaries to insinuate that Bernie Sanders was a "possible atheist with Jewish heritage". Please, read the full story.

What I don't understand... Why is someone's religion or lack thereof important?

The fact that the word atheist has a negative connotation has been bothering me for awhile and I have to get some things off my chest.

I judge people on their character.

I judge people on their actions.

I judge people on their kindness and their humanity.

I judge people on how they treat others.

I don't judge people on their religious beliefs.

Hell, I don't even know what religious beliefs some of my friends hold. And I don't care! What I care about is what kind of person they are. This may be influenced by their religion, their parents, their teachers, any number of things or a combination of several. My point is, whatever has contributed to making someone the wonderful person they are, it doesn't matter to me. A loving person is a loving person.

Friends, I am an atheist. I have been my whole life. I am steadfast in my personal belief and I am comfortable sharing it with you.

What I hate is when the term "atheist" is thrown around as if it is a bad thing. Because anyone who knows me knows I am not a bad person. I am a loving, kind, person... who happens to be an atheist.

There are many atheists in this world. You probably know a lot of them, even if you don't think you do! You probably like and respect many atheists. If you like me a little less or think negatively of me after learning this fact, I would urge you to look within yourself and figure out why that is. Because that would have more to do with you than it has to do with me.

I have no questions today, but I am happy to answer any of YOUR questions. The reason I say this is because I realize not many people understand atheists, and I think the more we can understand each other, the more accepting and loving we can be!