I should have published this post awhile ago, but better late than never!

Oh, and I am experimenting with putting profanity in my blog post titles to see if they get more page views than other blog posts... (jk, sort of.)

In the beginning of the summer, I finished up our epic house cleaning project by tackling the storage room. Our basement is half finished (Paul's man cave) and half a storage area. You would think we wouldn't have much to store since it's just the two of us, but we actually do! It may be because I have a lot of Christmas decorations...

I vowed to go into the storage room cleaning/organizing with the mindset of "GET RID OF ALL THE THINGS".  It actually wasn't super hard to do. I managed to easily get rid of several things that had sentimental value since there was no real reason to hang on to them.

Here are the items I was able to finally get rid of:

1. Swim team ribbons. I did summer swim team for several years and we always got ribbons after competing in events. I kept all of these ribbons in a shoe box but finally just straight up threw them away. I didn't even look at them first. Now I kind of wish I had...

2. Musical t-shirts. Ever since I was in 4th grade, I performed in musicals- sometimes up to three each year. It seems that for every show I was in, I bought the t-shirt as a keepsake. Now, I didn't throw out all of the t-shirts, but I threw out the ones that I didn't really feel connected to. The ones I kept I know I will never wear, but I just like having them. Maybe someday I will throw those away too, but not yet!

3. CDs. I didn't have a huge CD collection, but I had some. And again, I didn't donate them all, but I donated a lot. For instance I didn't need to save my Boyz II Men CD or my J-LO CDs, but I did need to save all my Madonna and NSYNC CDs! Fun Fact: The very first CD I purchased was Michael Jackson's Dangerous! 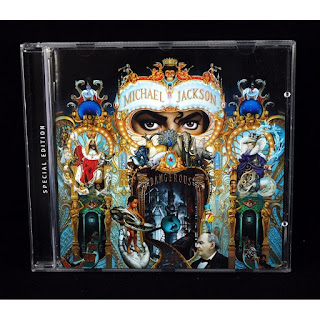 4. Sweet Valley Twins and Fear Street books. I did not own every single book in these series, but I did have a lot. And they were in mint condition because I was a crazy little girl who was very, very careful with her books. The first place I tried to donate these was the Community Aid store on the Pike. Unfortunately, they were not accepting books at that time. "Are you sure? Because I have about 50 Sweet Valley Twins and Fear Street Books in mint condition," I teased the attendant. That didn't change his mind. Oh well. Their loss is Good Will's gain! 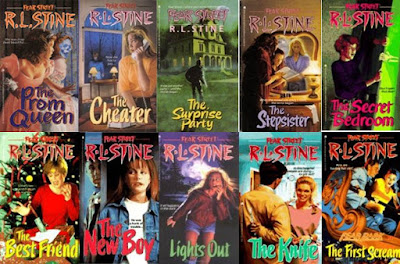 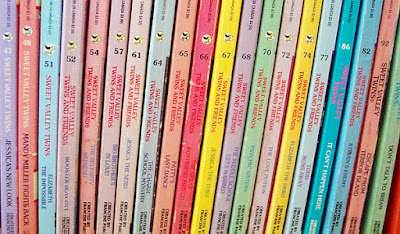 5. VHS Tapes. I had quite the VHS tape collection. Not only did I have several musicals, but I also had almost all of Madonna's world tours on VHS tape! It was actually hard for me to make the decision to get rid of these, but I reminded myself they surely exist on Youtube. Community Aid wouldn't take the VHS tapes, even after I dangled Madonna's Blonde Ambition tour in front of the attendant. Whatever.

My one regret about being born in 1982 was that I was too young to go see Madonna's Blonde Ambition Tour. Don't worry, I got to see her twice while I was in college!

6. Barbies. I was totally a Barbie girl. I had a Barbie house, a Barbie car, and lots and lots of clothes. I even had the Wet n' Wild Fun Park for a couple days but my brother pushed me and I landed on it and broke it. I forget which brother it was. Perhaps one of them remembers? Before I threw out all my Barbies and Barbie clothes, I went through all the clothes to look at them one last time. Oh my gosh, the MEMORIES!

You are proud of me for getting rid of all that stuff, right!? Well, there was one thing I just COULD NOT GET RID OF.... 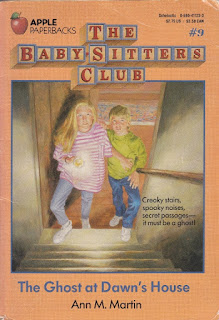 This was my favorite one! So spooky!!!! Have you read it!? Do you remember who the "ghost" was?

Guys, I was OBSESSED with The BSC when I was a kid! I have easily over 100 BSC books IN MINT CONDITION. I could sell them and make a little bit of money, but it's not worth it to me. I want to give them to a little girl who will read them and LOVE THEM as much as I did! Unfortunately, I have not found anyone yet, but if you know of anyone who would just be OVER THE MOON to have my Baby-sitters Club collection, I would love them to go to someone who would enjoy cherish love BE OBSSESSED WITH reading them

Is there anything you are hanging on to that you just can't part with?
Were you a Barbie girl?
What were your favorite books to read as a kid?
What was the first record/CD you ever bought?
Posted by Meg Go Run at 5:30 AM