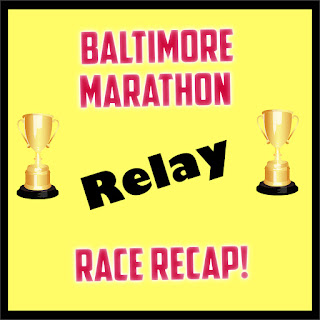 On Saturday, Meranda, Ana, Heather, and I ran the Baltimore Marathon Relay. Our team name was East Coast Bloggers because we all have running blogs. Be sure to check out their race recaps too!

We were running the relay for "fun", and if having fun was the main goal, I think we won first place! (Actually, we came in 85th out of 197 all female relay teams, so that's not bad!)

Baltimore is a HUGE race. There's a full marathon, half marathon, relay, 5k, and kid's run. How do they manage the logistics of all of that!? Somehow they did. There were a few snafus, which I will get into later, but for the most part, it was a well put on race.

On Friday afternoon, we met up in Baltimore and checked into the Holiday Inn Downtown. If you ever run Baltimore and need to stay overnight, I highly recommend this place for several reasons:

- Fire station right across the street. (I worry about hotel fires, but I am weird.)

- Their cafe with coffee and breakfast foods opened at 5am on marathon morning. They also had free water, bananas, and granola bars for runners in the lobby.

Lacey, Meranda's sister, was also part of our race weekend because she was running the full marathon!

After we checked in, we walked to the race expo. Guys, I HATE race expos. I don't like crowds of people, there is nothing I want to buy... I just don't like them. But I did like this race expo because it wasn't crowded and there really wasn't too much to see! (If you like race expos, you probably wouldn't be very impressed with this one!)

After spending just the right amount of time at the expo, we walked to Inner Harbor to grab some dinner. It didn't take us long to find a place where we could be seated right away. We even got to dine outside. I was surprised. Baltimore is such a huge race, I thought everyone would be downtown eating! 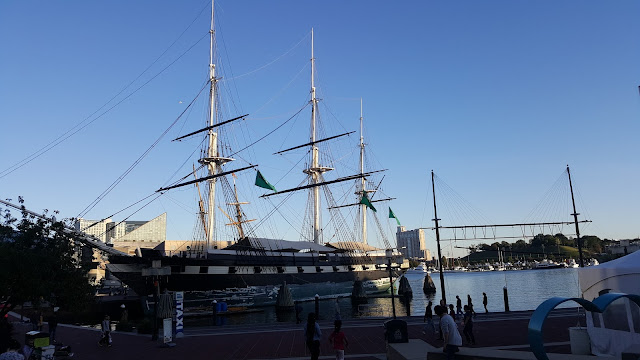 We all had our version of pre race food. Mine was two glasses of a very yummy roscato and a huge burger with fries. It was so good and I ate every last bite. We jibber jabbered all through dinner, planned out our races for the next day, and even touched on some murder talk. I did not know we would get to talk about murders at dinner so I was very happy!

Before turning in for the night, we took some pre race pictures in our shirts! 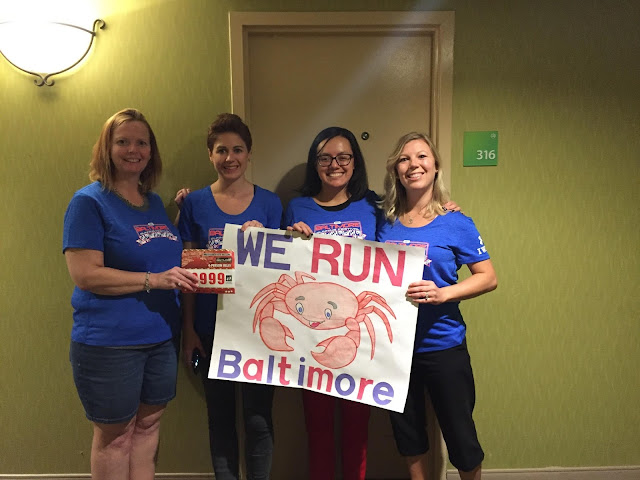 Ana and I roomed together. The room was really nice. We got two queen beds. Before we turned in for the night, we chatted for like two hours. Ana and I always have so much to talk about! But lights went out around 11:00. 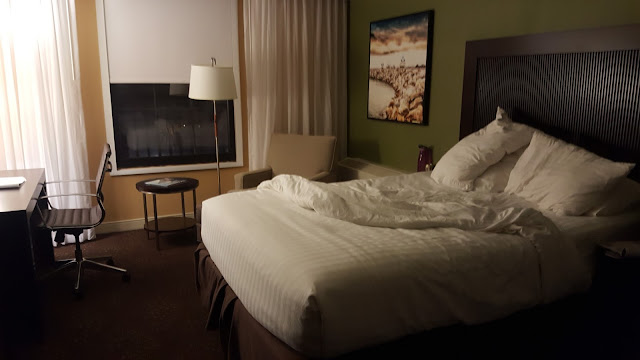 I slept so good the night before the race! Our hotel was actually quiet and I thought the bed was comfy. We got up at 6:30. Ana left before me because she had to take a bus to her exchange point.

I didn't have to leave the hotel until 9:30, so I had a lot of time by myself that morning. I enjoyed being alone for a bit! I took my time drinking coffee (3!) and eating breakfast. I had oatmeal and a banana. It was really good. 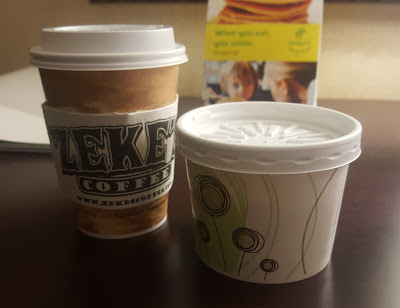 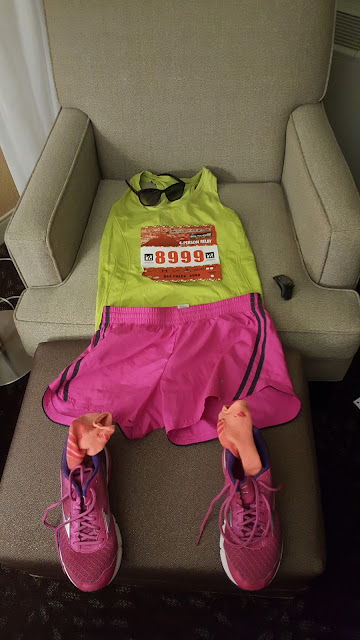 Normally I wouldn't wear a waist pack for a 6 mile race, but due to relay logistics I wanted to have some items with me.

Then it was time for me to leave and walk to my exchange, about 1 mile away. Good morning, Baltimore! 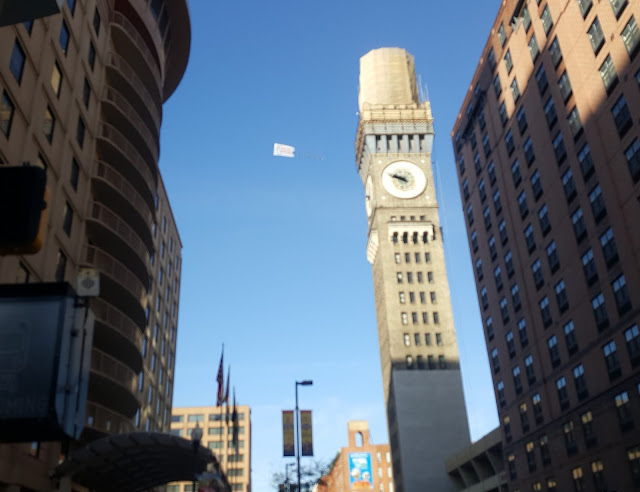 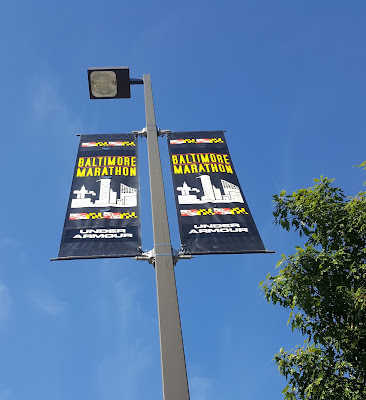 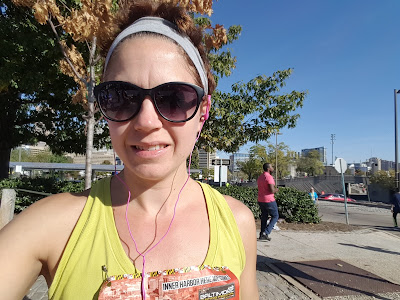 Throughout the morning I was getting updates from my teammates. Ana had to chill the longest at her relay exchange since she was the last leg, so she was out in Clifton Heights all morning. Heather ran her leg a little faster than expected and passed the timing chip off to Meranda. Now I was waiting near the Maryland Science Center for Meranda to give me the chip. Then I would run out to Ana.

There were plenty of port o johns at my spot and I was impressed they had holders for water! Dang, I haven't run a marathon in awhile and since my time off, I have missed out on all the port o john advancements! 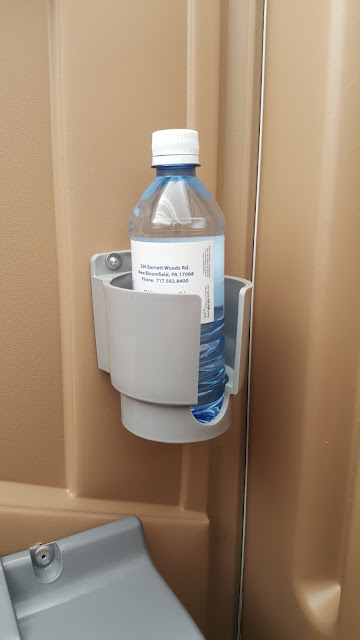 Some pics of my relay exchange... As you can see, it wasn't too crowded. 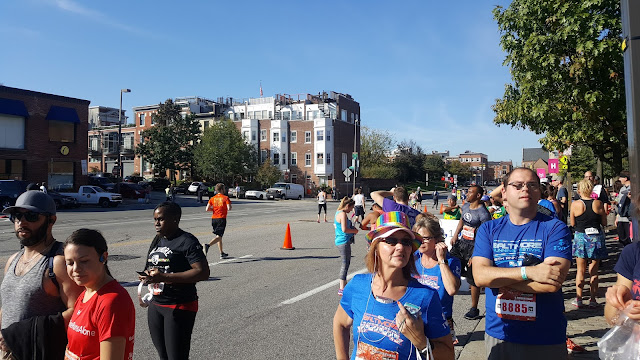 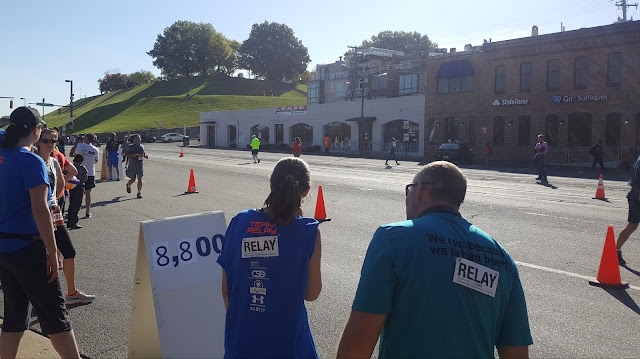 Meranda saw me before I saw her. She gave me the chip, I shoved some water in her hands, and off I went.

I didn't have a race plan other to just push myself- not to the brink, but to have a good, solid, hard run. My section had lots of long gradual uphills. By now it was really hot. I was proud that I kept trucking and managed to have an average pace in the 7:40s. Not too shabby!

There were some good crowds during my section and lots of police officers blocking roads. I always make it a point to thank the officers. I can't thank them all, but I figure if we all thank two or three, they will feel the love.

The bottom of my foot starting doing what it was doing during the trail races... that weird feeling. I think it is related to my toes falling asleep! When I wiggled my toes to wake them up, the feeling on the bottom of my foot went away. I think this has only happened during races because maybe my toes only fall asleep when I run fast and tie my shoes tight. (I tie my laces tighter during a race.) What do you all think?

I don't have much else to say about the running part of the race. I ran for less than an hour. Ana saw me at the exchange. I gave her the chip, she gave me her bag, and off she went!

I really wanted water because my head was pounding. However, I also wanted to get on the shuttle bus so I could get back to the city quickly and possibly see Ana finish. I hopped in the front seat of the first bus. Two minutes later, it was full, and off we went.

Unfortunately, this is where things went downhill. First of all, there was a lot of traffic, so it was taking a long time to even get out of the Clifton Heights area.

Second, there was a woman beside me sniffing SO LOUD. I finally offered her a tissue and she accepted it and thanked me profusely. I am such a bitch. I get all fired up about people sniffing and being gross, when all they need is a tissue, which I could provide!!!!! 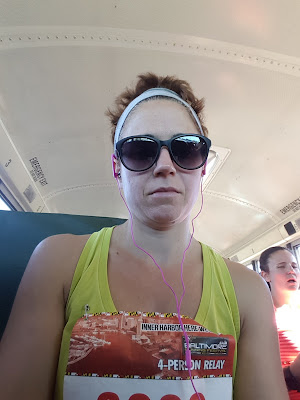 Third, OUR BUS DRIVER GOT LOST. And the only reason I knew he was lost was because the girl sitting beside me was local and was informing him that he got on the wrong highway. It was very frustrating. We were on the bus for about an hour, and then we were just sitting in traffic about a mile from the stadiums. The girl beside me said to the bus driver, "It would be faster for us to walk. Can we just get out here?" He said sure, so we all just got out of the bus! I followed the people who looked like they knew where they were going.

We walked to the stadiums, and then I walked toward the finishing area. I had already gotten a text that Ana finished, so I knew I missed that. But I figured I'd meet up with my teammates and grab my medal. (They did not hand out medals at the exchanges, you had to go pick it up somewhere.)

As you can imagine, the finishing area was so crowded and chaotic. I had no clue where the medals were, so I went to the bag check area (it happened to be right there) and asked them. They pointed me in one direction, so I started walking. I didn't see any medals, but I did see an information tent. They directed me back down the way I came! I let out an exasperated sigh and then they realized that no, the medals were across the street. I tried to cross the street and got yelled at by a cop. I realized I wasn't in the crosswalk area, once I found where I was allowed to cross the road, I headed to where I thought the medals would be. But an official blocked me from getting in the tent because it was the VIP tent. Why couldn't anyone tell me where the medals were!? The VIP tent official told me to go back the way I came. That was the point I decided, eff it, I'm going back to the hotel. I hate crowds and I hate chaos.

Ana got back to the hotel a few minutes after me. The rest of the gals stayed down at the harbor for a bit. I'm proud of us for all running strong races! Lacey did an excellent job as well! 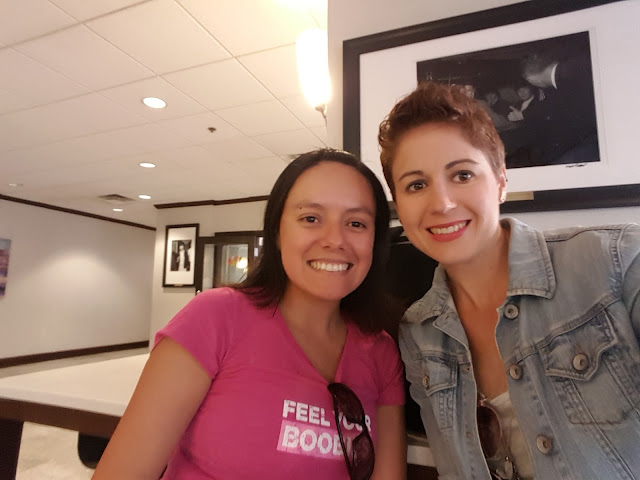 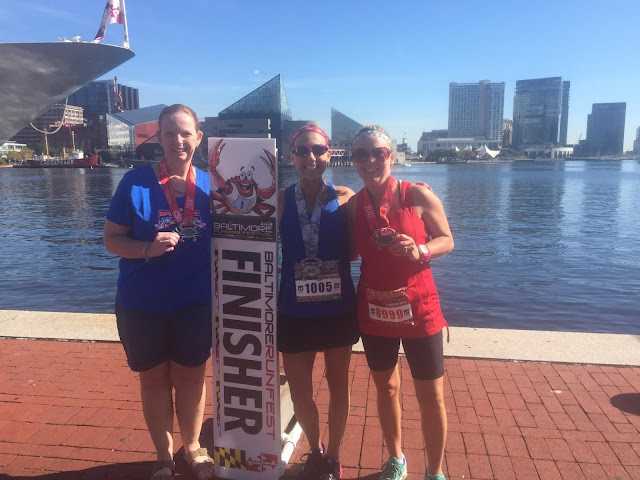 Thanks for the pic, Meranda!

After we checked out, we grabbed some lunch nearby and headed home. Again, Meranda, Ana and I gabbed the whole way home. I had so much fun talking with them and spending time with them. In fact, I think I had more fun talking with the girls than I did actually running! I'm glad I was included in the relay weekend!

Have you ever run a relay?
Anyone else race this weekend?
What do you enjoy doing in Baltimore?
Posted by Meg Go Run at 5:30 AM